A generally LOW avalanche danger exists in the Turnagain Pass area at all elevations. LOW danger does not mean NO danger. In exposed steep terrain with wind affected snow, watch out for isolated wind slabs. These could be sitting on weak faceted snow and may release out from under you. Additionally, watch your sluff on steep sustained slopes and chutes. As always, give cornices a wide berth and limit exposure under glide cracks.

SUMMIT LAKE: This region is just out of our advisory area to the south. The snowpack is shallow, composed of several weak layers, seen more wind effect and wind slab development. Extra caution is advised for triggering a slab avalanche.

Headed to Hatcher Pass? Don’t forget to check the HPAC’s Saturday avalanche forecast at hpavalanche.org and their Facebook page!

This morning, skies are clear, winds are light from the east and temperatures cold. This morning also marks the 16th day of the January drought. During this dry spell, winds have been generally northwesterly and impacting ridgelines and peaks north of Girdwood, through Turnagain Arm and Portage Valley and south of Johnson Pass. The heart of Turnagain Pass has been spared much of the wind. Although there are various weak layers in the snowpack that were causing grief earlier, the slab on top of them is being slowly eaten away (faceting) and triggering an avalanche in one of these old buried layers is unlikely. What is more of a concern is finding a wind slab that was formed over the past week or so that is sitting on weak faceted snow. With the variable wind effect in the region, don’t let the green danger rating keep you from being observant and sticking with your safe travel practices. Until a change in weather arrives, we are in a Normal Caution avalanche regime, meaning there are still issues to watch for listed below. 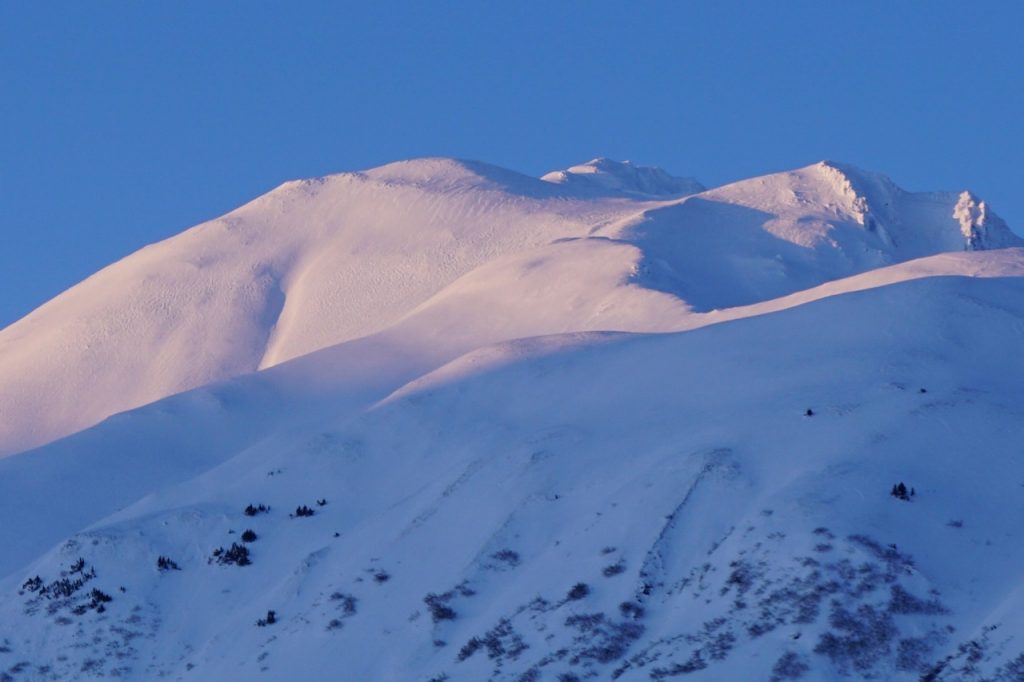 Some wind effect in the higher terrain on the southern end of Seattle Ridge at Turnagain Pass. 1/15/20.

Wind slabs on weak snow:  If you are headed to the steeper and higher elevation terrain, be on the lookout for wind affected snow. Watch for pillowed snow surfaces, feel for hollow feeling snow and generally speaking- stiffer snow over softer snow. Cracks that shoot out from you are a red flag as well as whumpfing (collapsing) of the snowpack. Even a small wind slab can be dangerous if it knocks a person off their feet and down a rocky slope.

Loose snow sluffs:  The surface snow is so loose and faceted it is very easy to initiate a sluff in steep terrain. These sluffs have been catching a few folks off guard. They can be quite heavy and gain more volume than one might expect. If heading to steep chutes or slopes, sluffs should not be underestimated.

Glide cracks:  Despite the frigid temperatures, glide cracks continue to ooze open. It’s always a good idea to limit any exposure under them as they can release at any time.

Cornices:  We have had no reports of cornice failure for some time, but we still need to give them a wide berth. 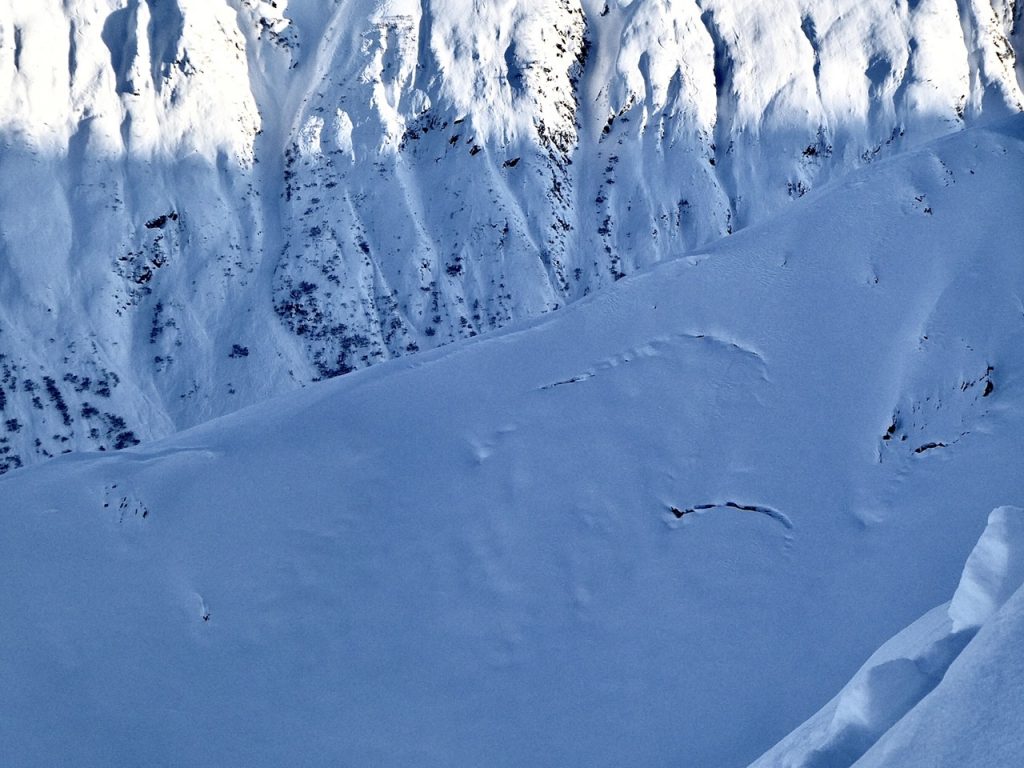 Glide cracks on the northern most portion of Tincan, just above Todd’s Bowl. 1.17.20. Photo: Allen Dahl

Snowpack update:  This graph shows the snow depth from the past 30 days at 1,880′ at the Turnagain Pass SNOTEL. After around 2 feet of snow fell during the holidays, for a total snow depth of 46 inches, the depth has decreased (settled) almost a foot over the past 16 days and now sits at 36 inches. Note: there was a short pulse of moisture on Jan 13th that did add 1 inch of snow during the dry period. Also of note, the snowpack is just under half of what it normally is this time of year.

Yesterday: Mostly sunny skies were over the region with a few clouds filtering through. Ridgetop winds remained from the east and bumped up into the 10-15mph range in the afternoon before quieting back down to around 5-10mph overnight. Temperatures were again inverted with upper elevations in the 10-15°F range and valley bottoms -20 to 0°F. Overnight, the inversion has remained in place.

Today: Mostly sunny skies will prevail for one more day with a few clouds possibly moving in this afternoon. This morning, Ridgetop winds are light from the east and temperatures sit near 0°F in valley bottoms and around 10°F at the higher elevations. Winds are forecast to remain light through the day and tonight, in the 5-10mph range from the east. Temperatures should again rise into teens at all elevations during the day and remain above 0°F overnight.

Tomorrow: Clouds will continue to move in tomorrow ahead of a low-pressure system forecast to push in from the Gulf Sunday night into Monday morning. Winds should be on a slight rise tomorrow afternoon from the east and a trace to a few inches of low density snow (to sea level) is forecast for Monday into Tuesday. 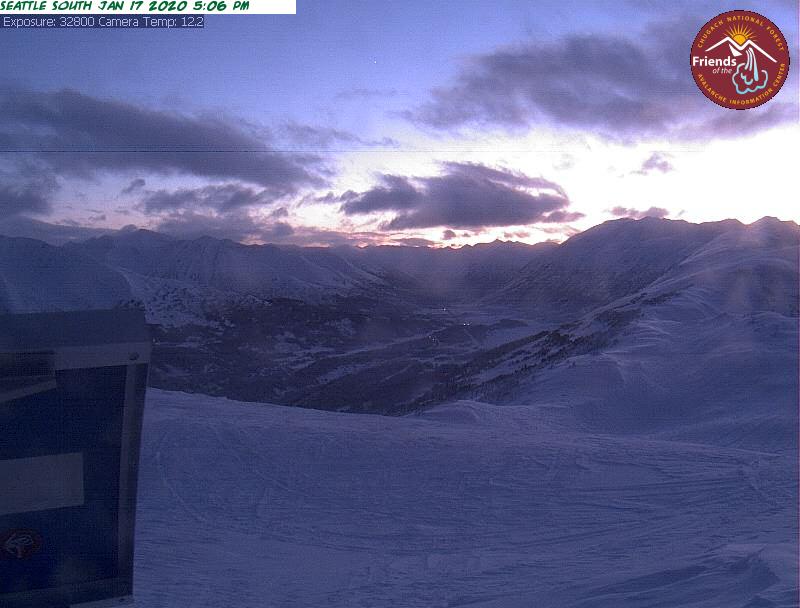