The avalanche danger will be CONSIDERABLE above 1000’ as strong winds and continued snowfall will make human-triggered avalanches likely during the day. Dangerous avalanche conditions will warrant conservative decision making today. Pay attention to indicators of instability, and be aware of the potential for increasing danger as the next storm approaches. We are expecting avalanche danger to rise as the next round of snowfall picks up this evening into tomorrow.

The danger is MODERATE below 1000’, where continued rainfall will make loose wet avalanches possible.

Summit Lake: The snowpack in the Summit Lake area is quite different from the snowpack at Turnagain Pass and in the Girdwood Valley. With a thinner pack, we are still paying attention to various buried weak layers. While this is important to be aware of, it will not be a major concern until we see a large loading event in the area.

Seward/Lost Lake/Snug: The next round of snow and winds is expected to impact the Seward area earlier than Turnagain Pass/Girdwood. If you are getting out around Seward, be aware of the increasing chance for triggering avalanches as snowfall and winds begin to pick up later today. We still do not have a lot of data about the snowpack in this area, so if you do get out please share some observations Here.

Tincan: Storm slabs were very touchy yesterday in the Tincan Trees. These avalanches were not very big– most of them were around 6-8” deep and 50’ wide. One did propagate several hundred feet, but it did not run very far.

Notch Mountain: Skiers saw a small natural avalanche release on a steep slope near treeline, which was not large enough to bury a person. 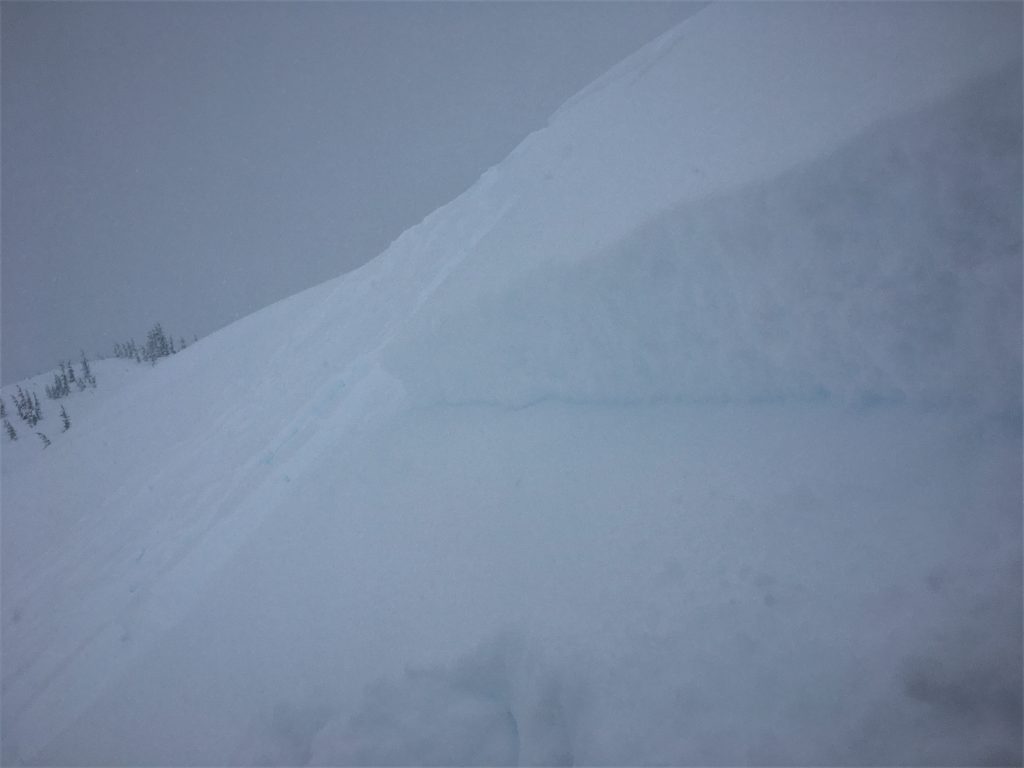 The wind has been at work loading heavy snow from Friday and Saturday on a layer of low-density snow that fell on Thursday. This upside-down setup is very sensitive to human triggers, and we also had reports of some natural activity yesterday. These avalanches were small yesterday, but with 9″ snow equal to 1.1″ snow water equivalent (SWE) over the past two days, it will be likely that a person could trigger a dangerous avalanche large enough to get fully buried today on a wind-loaded slope.  The most likely places to find fresh wind slabs will be below ridgelines, in cross-loaded gullies, and below convex rollers.

These slabs remain sensitive, and danger will increase when we start to see increased winds and precipitation. The National Weather Service has issued a Winter Storm Watch and a High Wind Warning starting tonight through Monday evening. Pay attention to changing conditions as this next storm approaches, and be aware of clear signs of instability like shooting cracks, collapsing, and recent avalanche activity. We are starting the day with dangerous avalanche conditions, and the weather is not going to make things any safer in the short term. Today is not the day to move into bigger terrain. 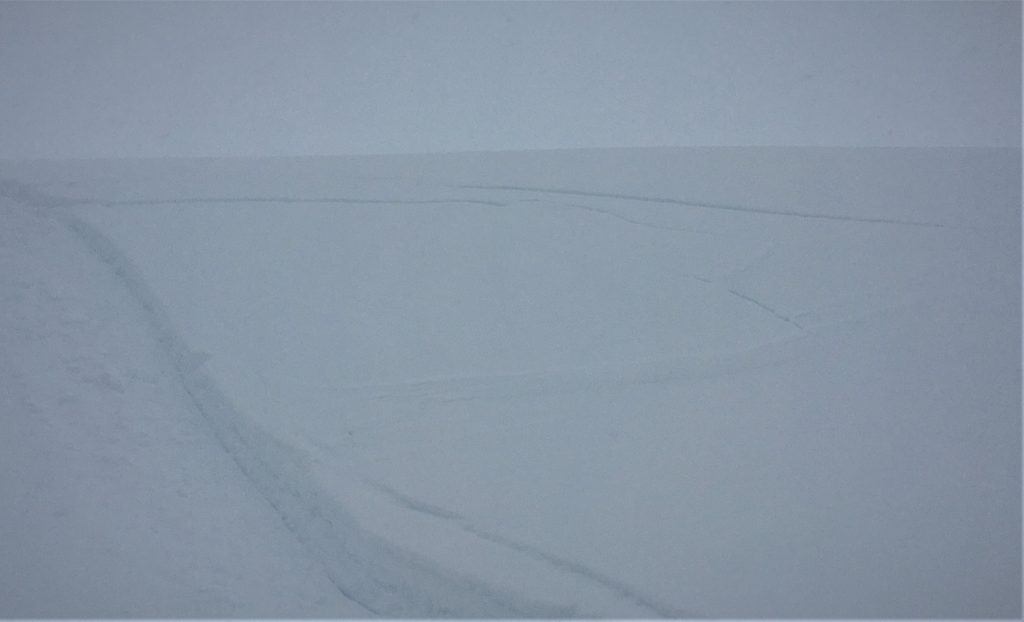 Shooting cracks on a small slope yesterday were just one indicator of poor stability. 01.16.2021 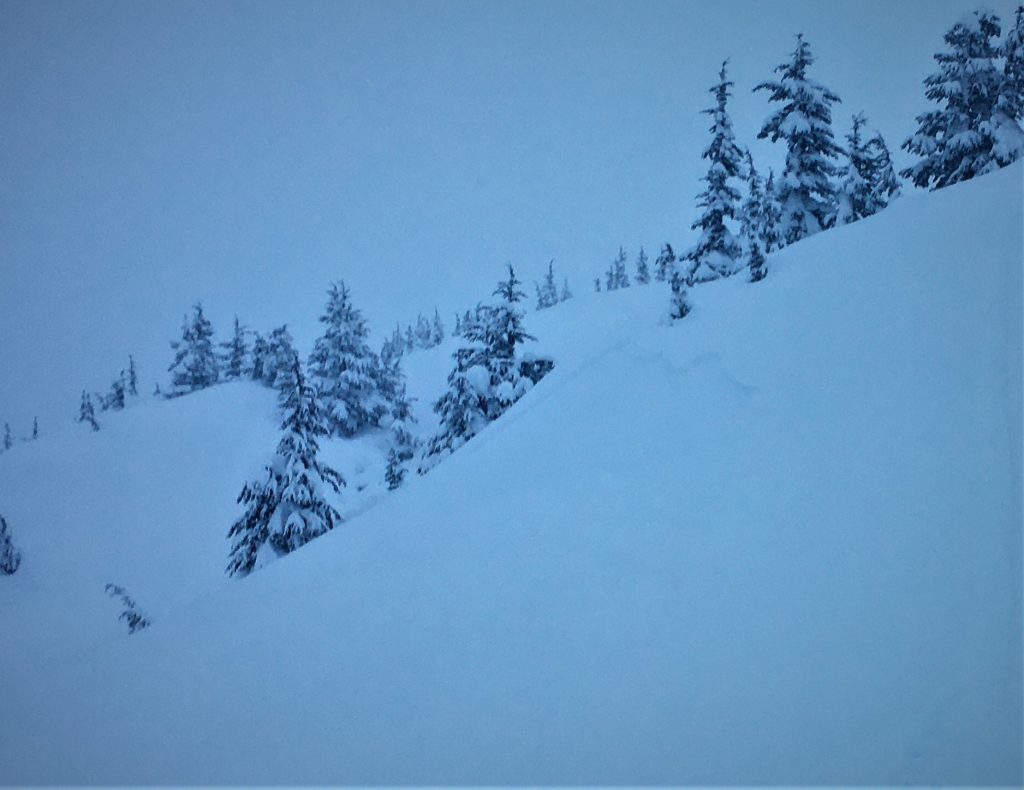 This was one of many small skier-triggered storm slabs we saw yesterday at Tincan. We are expecting more activity today as winds continue to load slopes. 01.16.2021

Yesterday: We received 4-6” snow at mid elevations, with the mixed precipitation up to around 1400’ for brief periods, and sustained rain below 1000’. Easterly winds picked up during the day, with average ridgetop speeds up to 47 mph and gusts to 77 mph at the ridgetops. High temperatures reached into the upper 30’s F at lower elevations and in the high 20’s F at upper elevations.

Today: Moderate to strong easterly winds continue today, blowing 20-30 mph at the ridgetops. Temperatures are expected to stay in the mid-to upper 20’s F at upper elevations and in the low to mid-30’s at lower elevations. The rain line could reach up to 1500’ today, but we are not expecting to see much precipitation until later tonight. We could get 1-3” snow during the day today.

Tomorrow: The National Weather Service has issued a Winter Storm Watch and a High Wind Advisory beginning tonight and extending through Monday evening. We could see as much as 1-2′ of snow by the end of the day tomorrow. Winds are expected to pick up substantially overnight, with sustained ridgetop speeds above 50 mph. Temperatures are expected to remain in the high 20’s to low 30’s F through the day tomorrow. We should see the rain line drop back down, with snow to sea level tonight.