Today’s avalanche danger is CONSIDERABLE above 2500′, where yesterday’s heavy snowfall and strong winds have built sensitive slabs on top of weak snow surfaces. It is likely a person can trigger a large avalanche 1-3′ deep, and cautious route finding will be essential. This means avoiding traveling on or below steep slopes, especially just below ridgelines, on convex rollovers, or in wind-loaded gullies.

The danger is MODERATE below 2500′, where it will still be possible to trigger an avalanche 1-2′ deep breaking on weak snow below yesterday’s storm snow. Choose your terrain carefully, and be on the lookout for clear signs of poor stability like shooting cracks, collapsing, and fresh avalanche activity. With rain levels as high as 1500′ through last night, loose wet avalanches will be likely in the lower elevations.

*Roof Avalanches: Continued warm temperatures and rain will make roof avalanches likely today. Keep an eye on children and pets, and be careful where you park your vehicles.

Seattle Ridge: Riders reported triggering multiple small storm slabs near the motorized uptrack. Nobody was caught in any of the slides. 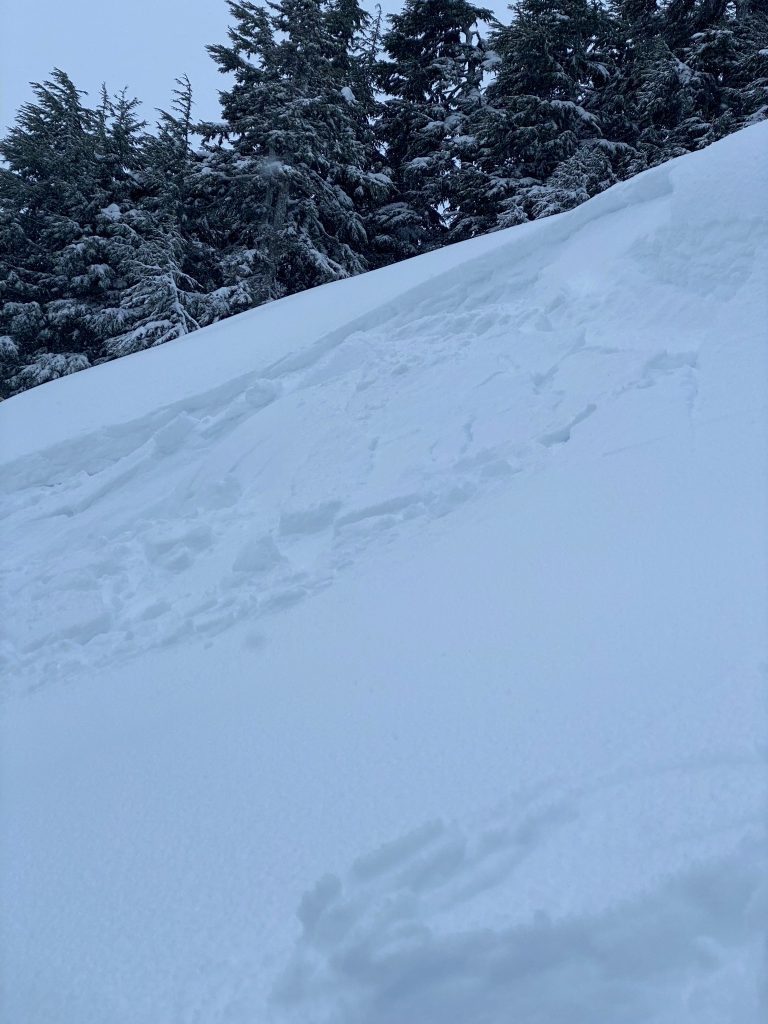 The heavy snow and strong winds from yesterday have buried a variety of weak surfaces, which will keep avalanche danger elevated today. As of 6:00 this morning, storm totals are as follows:

Storm totals were higher in the Portage and Placer valleys. which likely recieved 18+” in the upper elevations. This snow came along with strong easterly winds through most of the day yesterday. The Sunburst weather station recorded sustained speeds of 20-50 mph with gusts of 35-70 mph through 6:00 p.m. Winds in the Girdwood area were slightly calmer at 15-20 mph before dropping down to around 10 mph at 11:00 a.m. yesterday. While we are expecting to see precipitation trickle off today, the problem we are left dealing with is that all of yesterday’s storm snow has buried a variety of weak surfaces that will remain reactive today. This includes a layer of near-surface facets that formed during the cold and clear weather in the first week of the year, pockets of buried surface hoar that formed just before this storm moved in, and the New Year’s rain crust that is buried anywhere from 1-3′ deep in the mid and upper elevations.

Since the  new snow is burying these persistent weak layers, we can expect to see sensitive avalanche conditions lingering a little bit longer than normal following this storm. The most likely place to trigger an avalanche will be on steep slopes that have been recently wind loaded. The most suspect locations will be above treeline, near ridgelines, below steep convexities, and in gullies. It may also be possible to trigger an avalanche up to a foot deep on steep slopes sheltered from the winds in the middle elevations. Traveling in the mountains today will require an extra alertness. Seek out feedback as you move around. Look for clear signs of poor stability like shooting cracks, collapsing, and fresh avalanche activity like John mentions in his video from the field below. The current snowpack will need more time to adjust, and today is not a good day to jump out into big terrain.

Loose Wet avalanches: Continued light rain up to 1200-1500′ as of 6:00 this morning will make it likely we will see some loose wet activity in the lower elevations. These avalanches will most likely be relatively small and slow moving, but they can have consequences if they push you into terrain traps like alders, trees, creeks, or rocks. As always, be sure to pay attention to the terrain above you so you don’t get caught off guard. 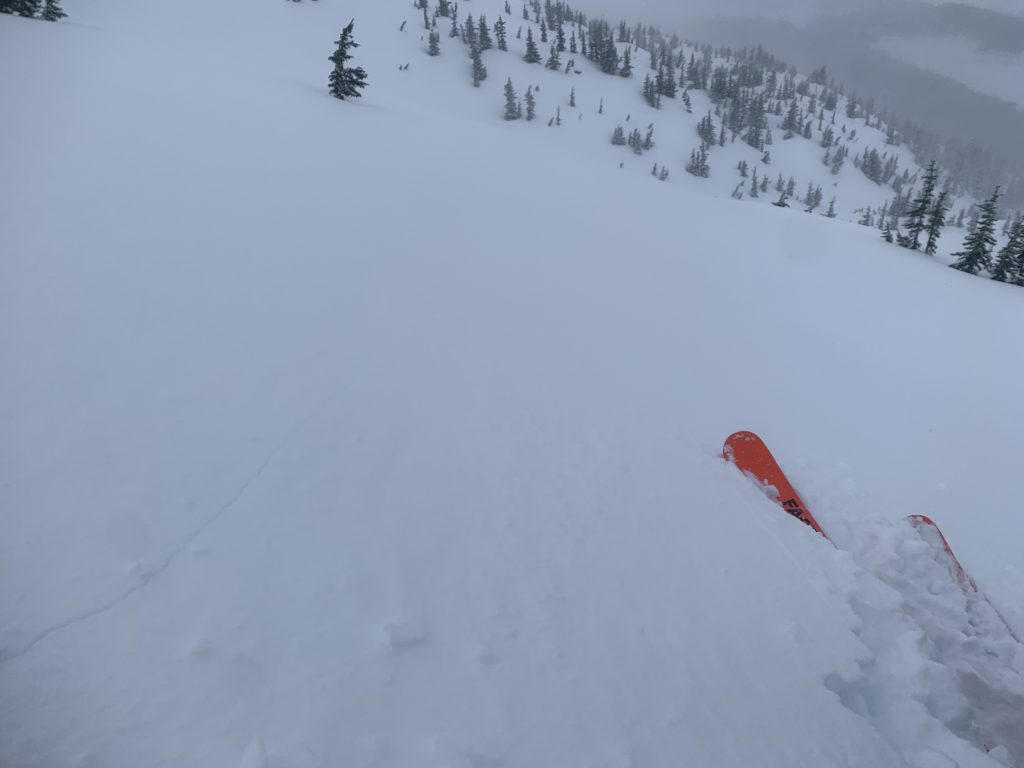 Shooting cracks at treeline in the Tincan trees yesterday. Since this storm fell on weak surfaces we can expect to see similar signs of poor stability lingering on some slopes today. Photo: Mike Loso. 1.10.2022.

Today: Light snow with rain to 1200′ is expected to subside this morning, with breaks in the clouds possible later this afternoon. We may see another 1-2″ snow before this round ends, with temperatures dropping in the mid 20’s F by the end of the day into tonight. The rain level is expected to drop back down to 500-600′, and light southeasterly winds are expected at 5-10 mph with gusts of 10-15 mph.

Tomorrow: Snow showers are expected to resume tonight, with another 2-5″ expected by the end of the day tomorrow. Right now it is looking like Turnagain Pass will be on the low end of that estimate and Girdwood will be on the upper end. Easterly winds are expected to pick up overnight into tomorrow at 15-30 mph under cloudy skies. Overnight low temperatures are looking to be in the low to mid 20’s, with daytime highs in the mid 20’s to low 30’s. Rain level is expected to stay around 300-800′.