The avalanche danger remains CONSIDERABLE on all aspects above 2,500′.  Another round of easterly winds with light snowfall may cause a few natural wind slab avalanches and human triggered wind slabs will be likely. These slabs are 1-3′ thick, composed of Monday’s storm snow, and sitting on a weak surface. Below 2,500′ the danger is MODERATE where winds are not as strong but triggering a slab avalanche around a foot deep remains possible. Small wet snow avalanches may be triggered at the low elevations below ~500′.

*Heavy snowfall with very strong winds are expected to increase the avalanche danger at all elevations tomorrow, Thursday.

There were no known slab avalanches triggered either naturally or by people yesterday. However, there was not a lot of traffic out testing the slopes. The photo below is of a natural wind slab avalanche from Monday during the stormy weather on the backside of Seattle Ridge in Zero Bowl. Believe it or not, there were several small sluffs triggered midday by the sun warming the top 3-4″ of light new snow, also pictured below. 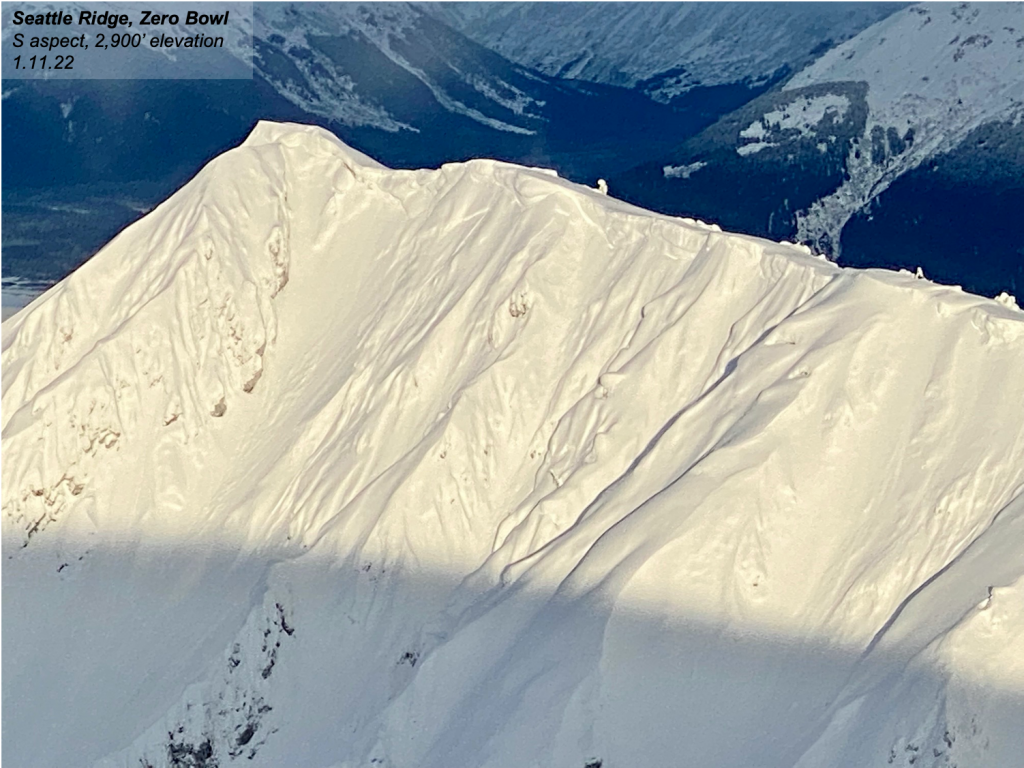 Wind slab avalanche, likely triggered by a chunk of cornice breaking off, during the storm on Monday, 1.10.22. Photo taken 1.11.22. 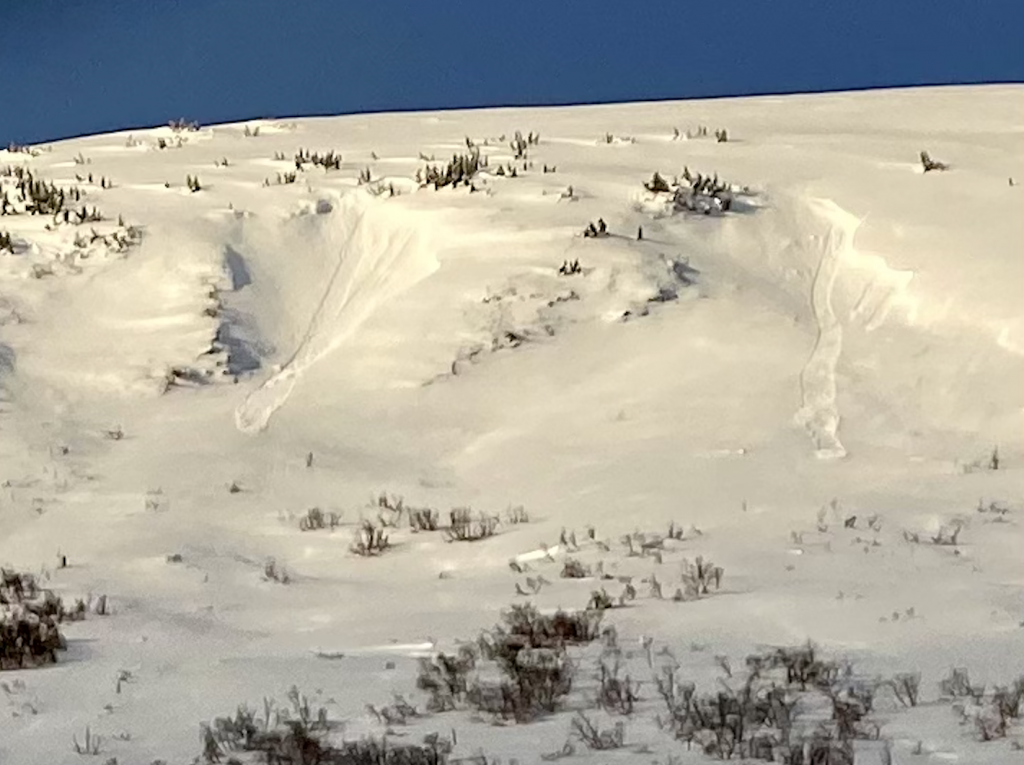 After a pleasant break in storms yesterday with a bit of sunshine poking through, another weather system has moved in overnight. This has brought increasing easterly winds, light snowfall, and continued warm temperatures. Only 1-2″ of snow has fallen in Girdwood and Turnagain Pass by 6am this morning but another 1-3″ may fall through the day (light rain to 300′ or so). The easterly winds along the ridgetops will be our main concern. They increased to 20-25mph overnight and should continue to rise near 30mph with stronger gusts today. Hence wind slab avalanches forming in Monday’s storm remains the avalanche problem.

The winds today are from the same direction as those on Monday when 10-12″ of new snow fell at Turnagain. That means wind slabs will just be getting a bit bigger than they were. They are sitting on a mixture of weak faceted snow and crusts that was the old surface and may not be bonding very well. Interestingly enough, yesterday we found Monday’s snow to not be very reactive on test slopes and in pits despite the fact they were sitting on weak snow – maybe due to slabs being too thin and not quite heavy enough. Either way, crusts and facets under a slab are not something to write off without more data and we should keep a conservative mindset when approaching the bigger terrain.

Things to watch for if you are headed out today:

Storm slabs:  In areas that have not seen the winds, keep in mind there still may be some lurking storm slabs that we could trigger. These should be on the shallower side (10-12″) and are associated with Monday’s snow over the crust as seen in the video below. 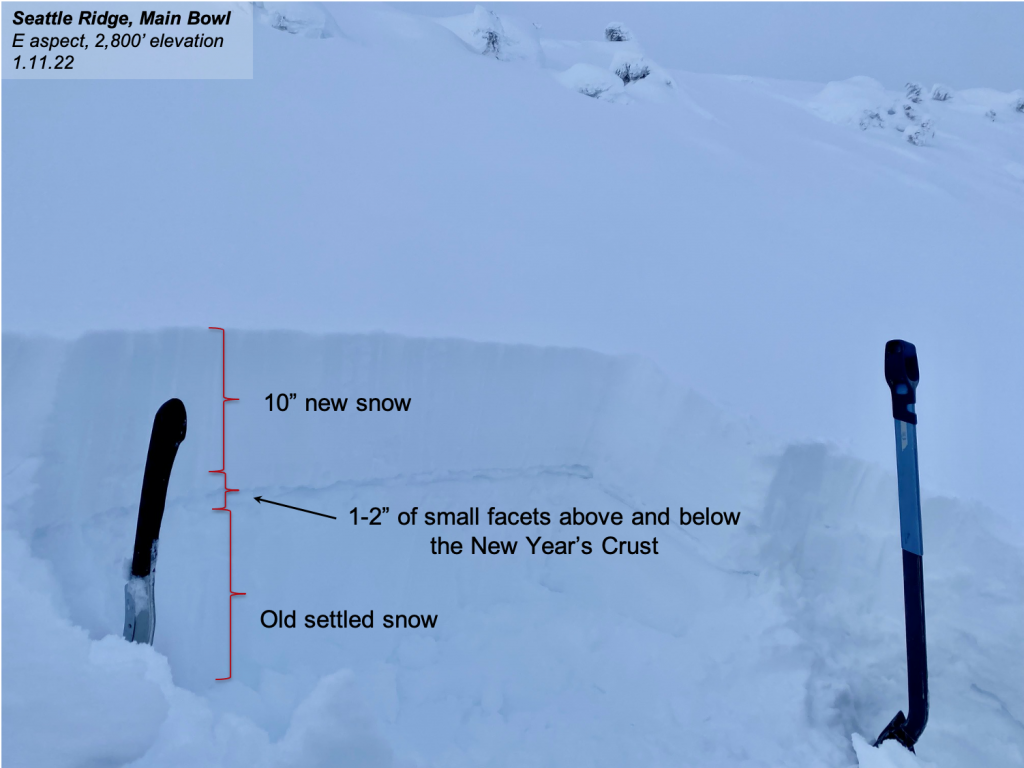 In this snow pit on Seattle Ridge, the new snow wanted to slide off the crust easily when pulled, but at the same time, didn’t want to propagate in our pit tests.

Lower elevations:  Monday’s storm created a crust up to 1,500 – 1,800′ and triggering an avalanche is unlikely from around 500′ to 1,500′ due to the crust. What is possible is an avalanche releasing from above and running into this zone. 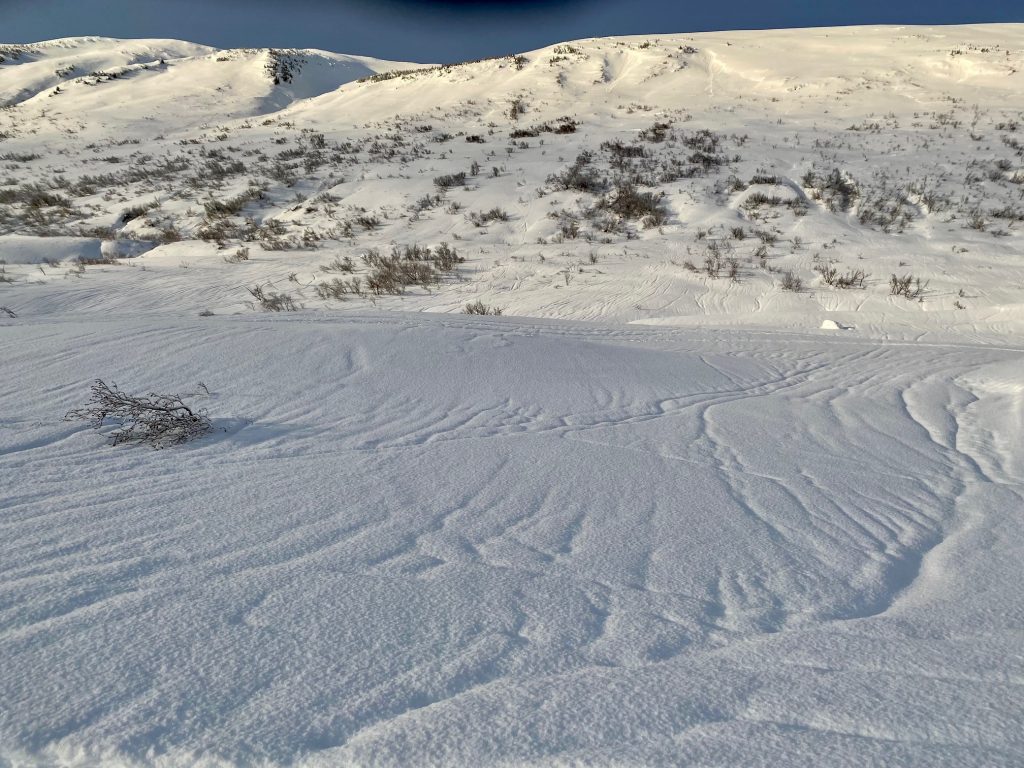 Yesterday:  Cloudy and obscured skies cleared out yesterday afternoon for some sunshine across Turnagain Pass. Ridgetop winds were light from the east during the day before picking up to 15-20mph with gusts in the 30’s since 6pm last night. Around 1-2″ of snow has fallen overnight and temperatures are in the 20’s along ridgelines and 30’s in valley bottoms.

Today:  Cloudy skies with light snowfall (light rain below 300-400′) are expected today. Between 1-3″ of snow could fall through the day. Easterly ridgetop winds should increase to 20-30mph with stronger gusts. Temperatures look to hover in the mid 30’sF at sea level to 1,000′ and in the 20’sF along the ridgelines.

Tomorrow:  Increasing snowfall is forecast for Thursday as the storm intensifies. Between 4-8″ of snow is possible with a rain/snow line near 500′ (potentially higher…). Ridgetop easterly winds also look to increase into the 40’s to 50’smph. Models are showing snowfall and wind tapering off on Friday into Saturday.