The avalanche danger is CONSIDERABLE above 2500′. There have been very large human-triggered avalanches two out of the past four days, breaking 3-6′ deep and very wide, connecting across very different terrain features. This unusually dangerous snowpack requires a cautious mindset, and the best bet is to stick to low-angle terrain. The danger is MODERATE between 1000′ and 2500′, where it is less likely a person will be able to trigger an avalanche, and LOW below 1000′.

Join us at the Girdwood Brewing Co. from 5:30-7:00 p.m. on Thursday, Jan. 19 for the second Forecaster Chat of the season. CNFAIC forecaster Andrew Schauer will open the night with an overview of the state of the snowpack, followed by a discussion on how safe terrain management changes depending on the type of avalanche problem at hand. More details here.

After multiple very large human-triggered avalanches in two out of three days, we did not have any activity reported yesterday. Check out the observations for details on Thursday’s avalanches on Seattle ridge here and here, and Saturday’s very large avalanche on Cornbiscuit here and here.

We are dealing with a dangerous snowpack that has shown its potential for making very large human-triggered avalanches. This includes several remote-triggered avalanches on Seattle Ridge on Thursday, and two very large avalanches on Cornbiscuit on Saturday. These avalanches are failing on a layer of facets associated with the Thanksgiving crust, now buried anywhere from 1.5 to 6′ deep or deeper, with an average depth of around 2-4′. That crust layer formed on all aspects, and has shown its potential for avalanches connecting across very different terrain features. The combination of this problematic setup being so widespread, deep, and so reactive to human triggers is a scary scenario.

In addition to the size and sensitivity of these avalanches, there are a few more things that make it especially dangerous and difficult (if not impossible) to manage. As seen from the avalanche on Cornbiscuit, the layer is deep enough that a person may need to find just the right spot to trigger an avalanche. This means there can be multiple sets of tracks on a slope without consequence before somebody triggers a big avalanche. The other thing that makes it challenging is that our typical travel tests won’t tell us anything about this layer. It is too deep to get any information from hand pits or test slopes, and it is pushing the limits of our standard stability tests (although I did have a column propagate a fracture and fall on my head while I was cutting an extended column test on Cornbiscuit yesterday).

With such unusual behavior and virtually no way to manage the problem in steep terrain, it’s time to take a big step back. For now the only way to stay out of trouble is to stick to low angle terrain.

Wind Slabs: Winds are slowly picking up, and will likely be strong enough to start building fresh wind slabs later in the day. These will be small today, but they will be forming on top of a new weak layer of surface hoar and facets, so we can bet they will be touchy. Keep an eye on changing conditions and increasing chances of triggering an avalanche near the surface if the winds pick up earlier in the day. A shallower avalanche triggered on the surface will have a greater chance of triggering a big avalanche deeper in the snowpack. 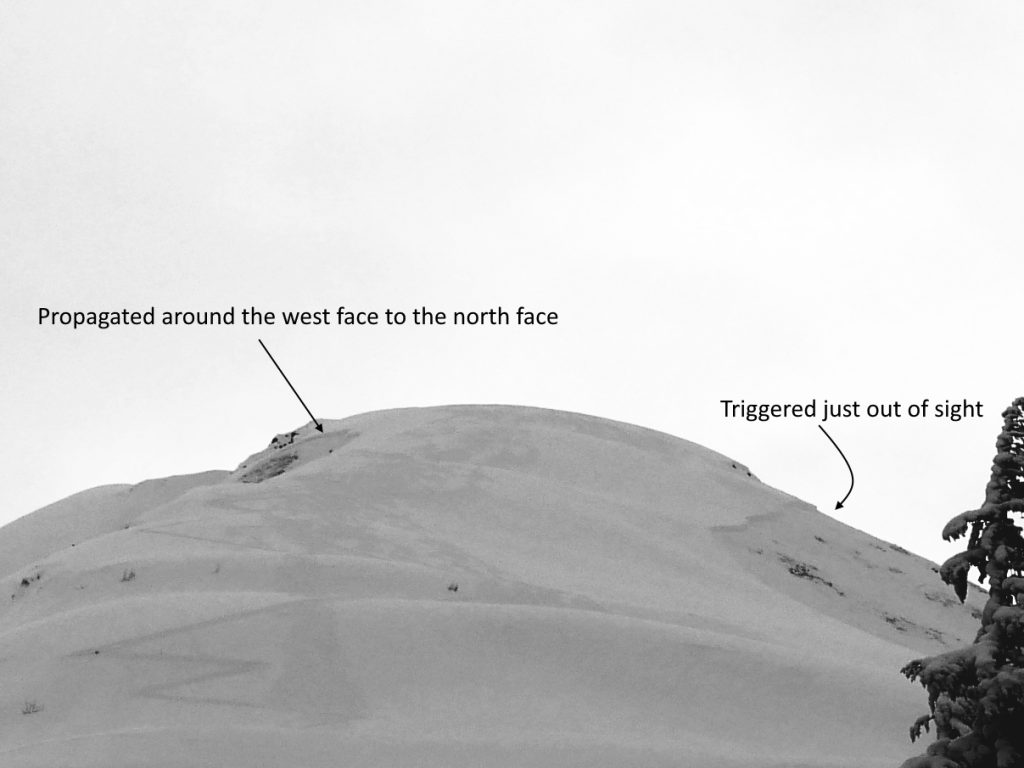 The fracture that connected these two avalanches propagated around 1500′, connecting south, west, and north-facing slopes. 01.08.2023.

Click here to view the video below if it doesn’t load in your browser.

Yesterday: Skies were mostly cloudy, with increasing clouds through the day. Winds were light out of the east at around 5 mph with gusts of 15-20 mph, picking up slightly overnight. We picked up a trace to an inch of snow overnight, and temps climbed from the single digits below and above 0 F yesterday morning to the mid to upper 20’s F overnight.

Today: Skies will be partly to mostly cloudy, with some clearings through the day and improving visibility later in the day. Winds will be light out of the east at 5-15 mph gusting 10-25 mph, picking up later in the afternoon through tonight. No precipitation is expected today, with a trace overnight. High temperatures should be in the mid to upper 20’s F near Turnagain Pass and in the upper teens to low 20’s F near Girdwood.

Tomorrow: Winds should pick up again tonight, blowing 15-20 mph out of the east with gusts of 20-30 mph. Light snow showers should bring 3-5” snow, with snow down to 200-400’. The mountains around Seward could see over a foot of snow during the same time frame, with light snowfall starting tonight and continuing through Tuesday night. High temperatures will be in the mid to upper 20’s F, with lows dropping into the upper teens to low 20’s F. Skies will be mostly cloudy to overcast during the day.