Traveling in the upper elevation backcountry right now follows the advice for CONSIDERABLE avalanche danger; conservative terrain selection and an extra cautious mindset. Two very large slabs were triggered yesterday by skiers, with debris running into valley bottoms and over up-tracks. Triggering a large and dangerous slab is again possible today. Slabs are failing on a buried weak layer 3-6′ deep. They could release after many tracks are on a slope, and be triggered remotely from the top or side of a slope. The danger is MODERATE at treeline for the possibility of smaller slab avalanches to be triggered. The danger is LOW below 1,000′ where crusts exist.

*To avoid this issue, we can stick to slopes 30 degrees or less with nothing steeper above us, including avoiding valley bottoms with large slopes hanging over us.

Two very large avalanches were triggered yesterday on Cornbiscuit at nearly similar times. One on each side of the ridge (SW facing and N facing). It is looking like they were both triggered due to the same collapse in the snowpack that propagated over the ridge. The SW avalanche caught two skiers with one partially buried, able to self rescue, and is OK. Several people took part is searching the debris with no signals found. We are still gathering details and Andrew will attempt to investigate the avalanche(s) today. Crown depths were ~2-3+’ deep and the likely weak layer was facets on the Thanksgiving crust. Reports sent in HERE and HERE.

Prior to this, no large avalanches were triggered on Friday (one small slab in steep terrain was skier triggered on Tincan), but on Thursday, three days ago, several large slabs were remotely triggered by two snowmachiners in upper Seattle Ck drainage (no one caught). 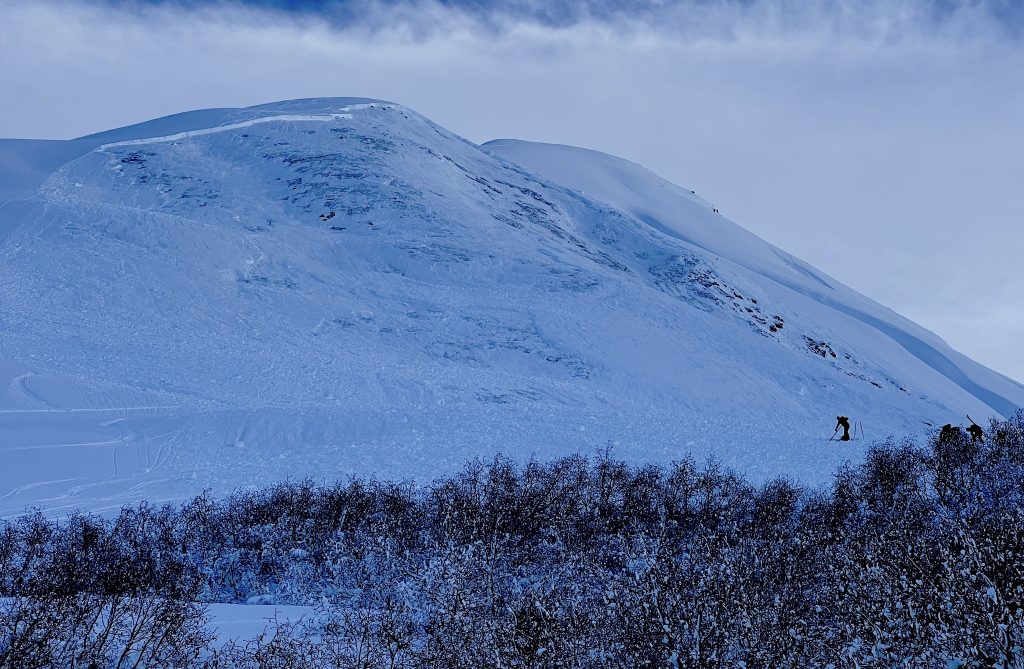 Large avalanche on the SW face of Cornbiscuit. Many people in the area did an extensive beacon search over the debris with no signals found. Photo by a member of one of the groups in the area, 1,7,23. 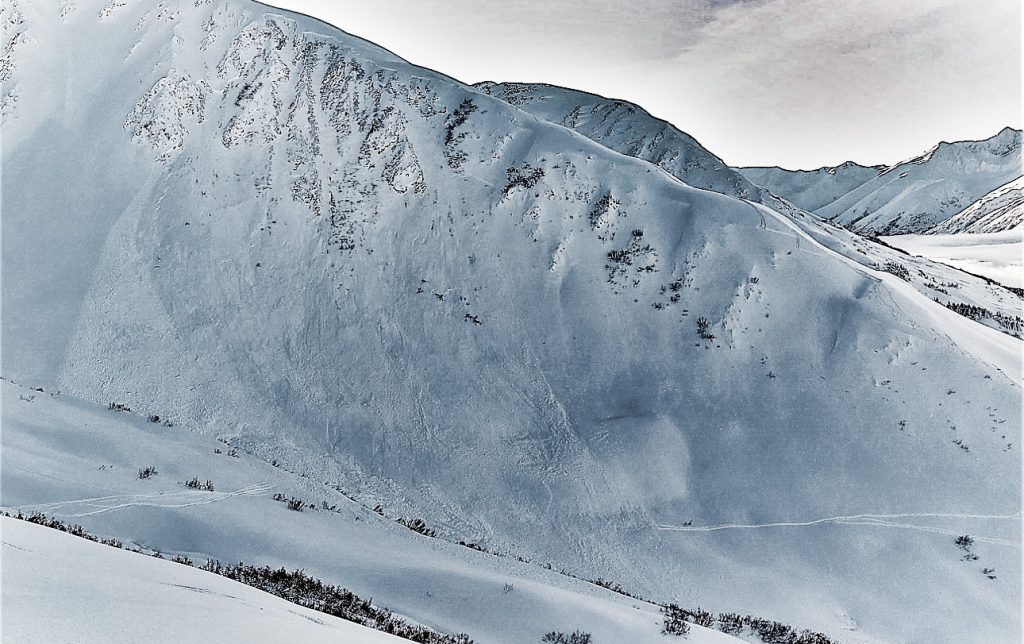 Avalanche on the north aspect of Cornbiscuit. Debris can be seen that covers an uptrack that people were on just before the avalanche. Photo from a group on Magnum 1.7.23. 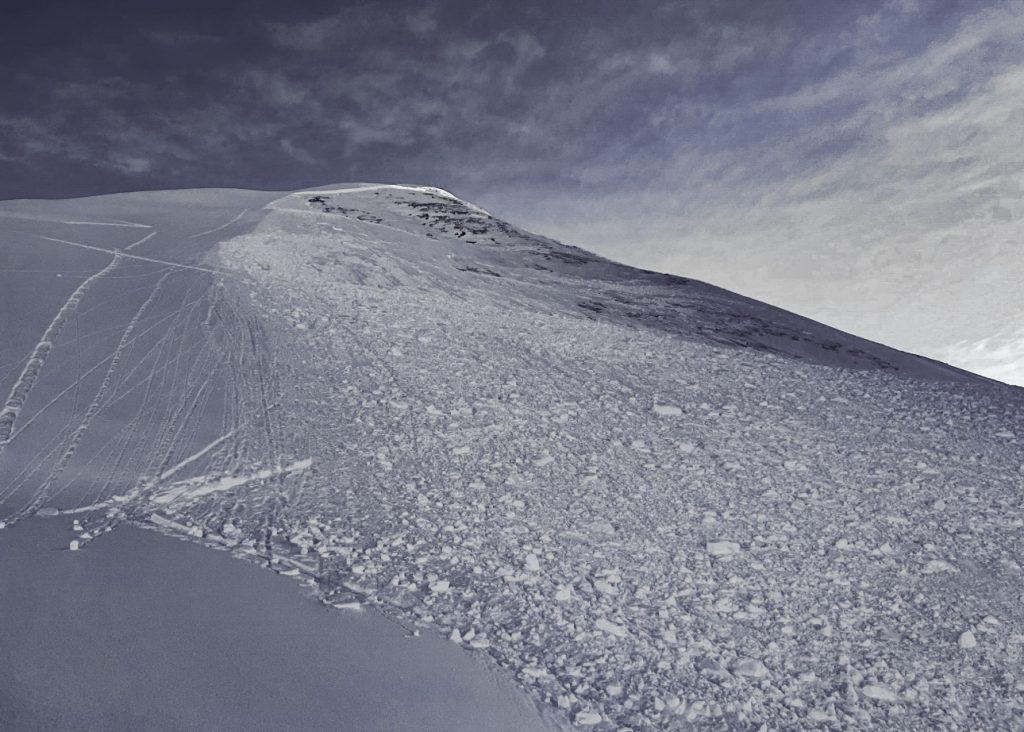 Closer up view of the left (westerly most) flank of the SW slab. Photo by group in the area 1.7.23. 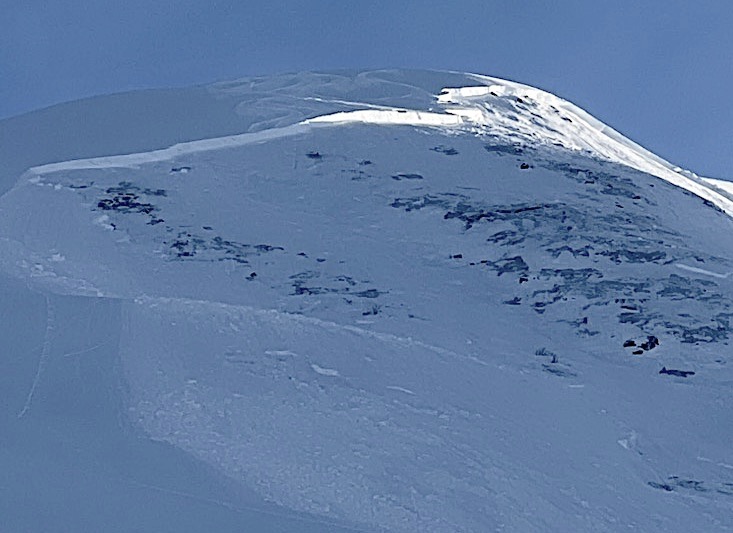 Another close up on the slab on the SW face, note the several ski tracks from earlier in the day. Photo from another group in the area, 1.7.23.

The mountains showed more of their cards yesterday. Dangerously large slabs can still be triggered by people. These slabs are breaking in buried weak layers that can propagate across terrain features and release on all aspects. They look to be releasing around 2,500′ and above. This is the kind of avalanche problem where often no signs of instability are seen, several tracks can be on a slope, making things ‘appear’ OK, and it’s not till someone hits a thin spot that collapses the weak layer and the whole slope releases. Cornbiscuit was the perfect storm and luckily everyone was OK. This type of weak layer is acting up and creating avalanches in ways we have not seen for years. It is proving it can propagate a collapse across various aspects and over ridges, simply scary. After seeing all the large slabs three days ago triggered in Seattle Ck with similar character, we can expect there are more large avalanches waiting to happen in the days ahead.

For anyone headed out today, getting onto large slopes over 30 degrees is a roll of the dice. Yes, there have been a lot of tracks on a lot of steep slopes with no avalanches occurring. This is the MODERATE danger conundrum. Meaning triggering an avalanche is possible, not necessarily likely. What is happening today, and what we have done before, is up the danger for public safety messaging and focusing more on the Travel Advice in the Danger Scale versus the actual avalanche trigger likelihood. Added into the equation is the size of the slabs, they are deadly and unmanageable. They can clearly run into valley bottoms and cover areas that are often relatively safe.

Unfortunately, this issue will likely be with us for a while and we’ll continually be assessing it as best we can. If you are like me, I’m changing my mindset to having fun in low angle terrain for the foreseeable future.

Cornices:  We have only heard of one human triggered cornice fall during the last few days of nice weather. This was on Thursday (1/5), a snowmachiner triggered a cornice, fell off with it, an avalanche was subsequently triggered (around a foot deep) and the rider was carried ~800′. They pulled their airbag, ended up on the surface of the debris and were OK. This report came in a bit late, so if you haven’t seen it the report from that group is HERE. In short, continue to give cornices a berth.

Yesterday: Mostly sunny skies were over the region with light westerly ridgetop winds. Temperatures were in the single digits F in valley bottoms and the teens at the mid and upper elevations.

Today: Clouds are forecast to move in today ahead of light snow showers beginning this afternoon. Around an inch of snow could fall tonight. Ridgetop winds are light from the west this morning and will swing around to being light from the east midday. Temperatures are chilly, sitting in the single digits F at sea level and a bit warmer, in the teens, at the higher elevations.

Tomorrow: A few light snow showers look to continue on Monday with some patches of sunny skies possible. Ridgetop winds could begin increasing from the east as the next system is forecast to move in for Tuesday. This should bring several inches of snow and stronger easterly winds. Stay tuned.