The avalanche danger will be MODERATE today above 1000′ during the daylight hours, but heavy snowfall and strong winds impacting the area starting this afternoon will be increasing the danger to CONSIDERABLE overnight. In the morning, before the snowfall and winds pick up, human triggered avalanches up to a foot deep will be possible in areas that saw active wind loading yesterday. Look for signs of snow transport on the surface and shooting cracks to identify areas with wind slabs that built up yesterday. Overnight, Human triggered avalanches 1+’ deep will be likely and natural avalanches will be possible in areas with active wind loading and significant accumulation of new snow.

A low pressure system will start impacting the forecast area this afternoon bringing moderate to heavy snowfall and increasing winds. The snowfall totals for this storm have come down a bit since yesterday but we still expect a significant new load with 18-24″ of new snow over a 24 hour period starting on Sunday afternoon. The timing of the new snowfall and winds will be the driving factor for how quickly the avalanche danger increases throughout the day. There is uncertainty in the weather forecast, but our best estimate is that significant snow accumulation will not happen until after daylight hours on Sunday.

The main concern for today are wind slabs up to a foot deep that formed yesterday and will continue to form today as we get additional snowfall and strong winds this afternoon. These fresh wind slabs will be possible for a person to trigger and could run farther than normal due to the New Years ice crust being buried just beneath the surface. With limited visibility today it could be hard to see if slopes above you are being actively wind loaded, so be aware of your position in the terrain relative to overhead hazards. Look for signs of recent snow transport on the surface, shooting cracks, and pillows of freshly loaded snow on leeward aspects to identify wind slabs.

Storm Slab Avalanches – As the new snow starts to accumulate this evening and overnight we will see a greater potential for storm slab avalanches at the interface between the new snow and the old snow surface. These could happen sooner if the timing of the snowfall is off, so be aware that if significant snowfall piles up throughout the day the avalanche danger will be rising quickly. We expect the new snow will not bond well to the 3-5″ of faceted snow and buried surface hoar that is on top of the New Years crust. 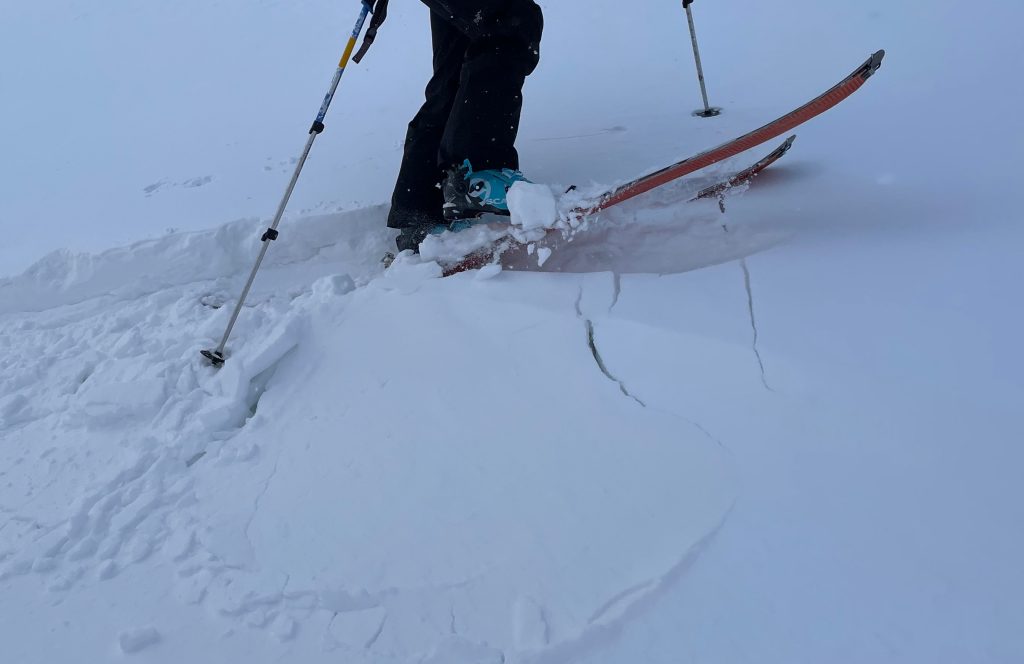 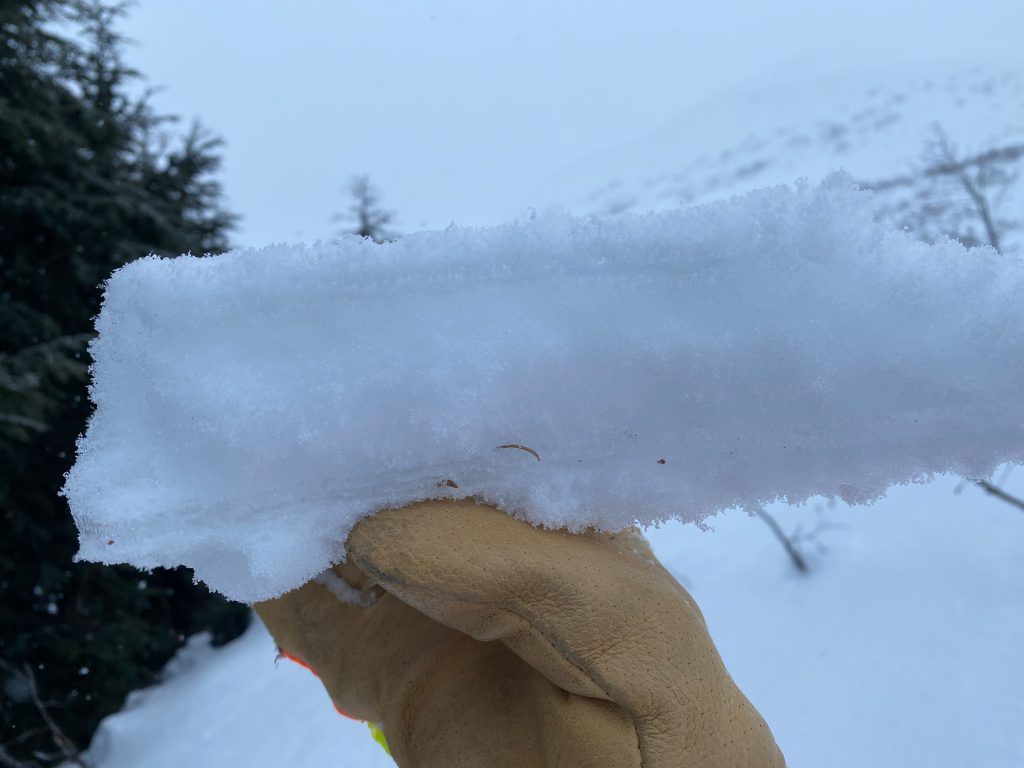 Our current snow surface is not likely to bond well with the incoming storm snow, with buried surface hoar and near surface facets above the icy New Years crust. Photo Eeva Latosuo 1.8.22

Yesterday: Overcast skies with light snowfall throughout the day in some areas and just brief periods of snow in other areas, accumulation up to 2″. Winds were moderate to strong at higher elevations with gusts into the upper thirties on Sunburst. Temperatures stayed well below freezing throughout the day, in the teens at lower elevations and single digits at upper elevations.

Today: A low pressure system will start to impact the area early this afternoon with moderate to heavy snowfall. Snow totals are on the order of 3-6″ before midnight on Sunday with another 3-6″ overnight on Monday. Total precipitation amounts could vary substantially across the forecast area with this storm, with higher snowfall totals in portage and placer. Temperatures should rise this evening with the snow line moving up to about 500-700′ overnight. Strong winds will accompany the snowfall with averages in the 5-25 range and gusts into the 50s possible overnight tonight.