The avalanche danger is MODERATE above 1000′ today. Triggering a very large avalanche on a buried weak layer 3-6′ deep is possible. We have seen widespread avalanches on deeply buried weak layers this week, including many human triggered avalanches that were remote triggered from low angle terrain adjacent to steeper slopes. We recommend conservative terrain selection and decision-making today because the consequences of being involved with one of these large avalanches are very serious. Below 1000′ the avalanche danger is LOW.

SUMMIT LAKE / SEWARD / LOST LAKE / SNUG HARBOR: Similar conditions exist across the region with the potential for very large avalanches releasing on deeply buried weak layers. Observations from Summit Lake this week showed widespread avalanche activity and a very weak snowpack in many areas. A cautious mindset is recommended to avoid being involved with a very large avalanche.

Join us at the Girdwood Brewing Co. from 5:30-7:00 p.m. on Thursday, Jan. 19 for the second Forecaster Chat of the season. CNFAIC forecaster Andrew Schauer will open the night with an overview of the state of the snowpack, followed by a discussion on how safe terrain management changes depending on the type of avalanche problem at hand. More details here.

Filing your PFD application? Our non-profit partner the Friends of Chugach Avalanche Center is an official Pick. Click. Give. organization, so please consider donating part of your PFD to support our avalanche forecast and public avalanche safety mission!!!

As folks ventured into more areas yesterday there was a lot of older natural avalanche activity reported throughout Turnagain Pass. One group triggered a small avalanche in steep terrain near Tincan and were able to ski off the slab. Most of the avalanches observed yesterday likely released on Wednesday or Thursday after the last 1′ of snow fell in Turnagain Pass and strong winds rapidly loaded slopes. Several of the avalanches we saw released on the facets above the Thanksgiving crust with crown depths of 3-6’+ and propagation of 500-1000’+ across slope. These are very large avalanches that had long run outs into seemingly safe terrain. A sobering reminder of the high consequences of being involved with a large persistent slab avalanche. See observations for more details (Goldpan area, Lynx Creek, Lyon Creek).

Sincere thank you from the CNFAC forecast team to all who have submitted observations to help us catalog and understand this widespread avalanche cycle!!! 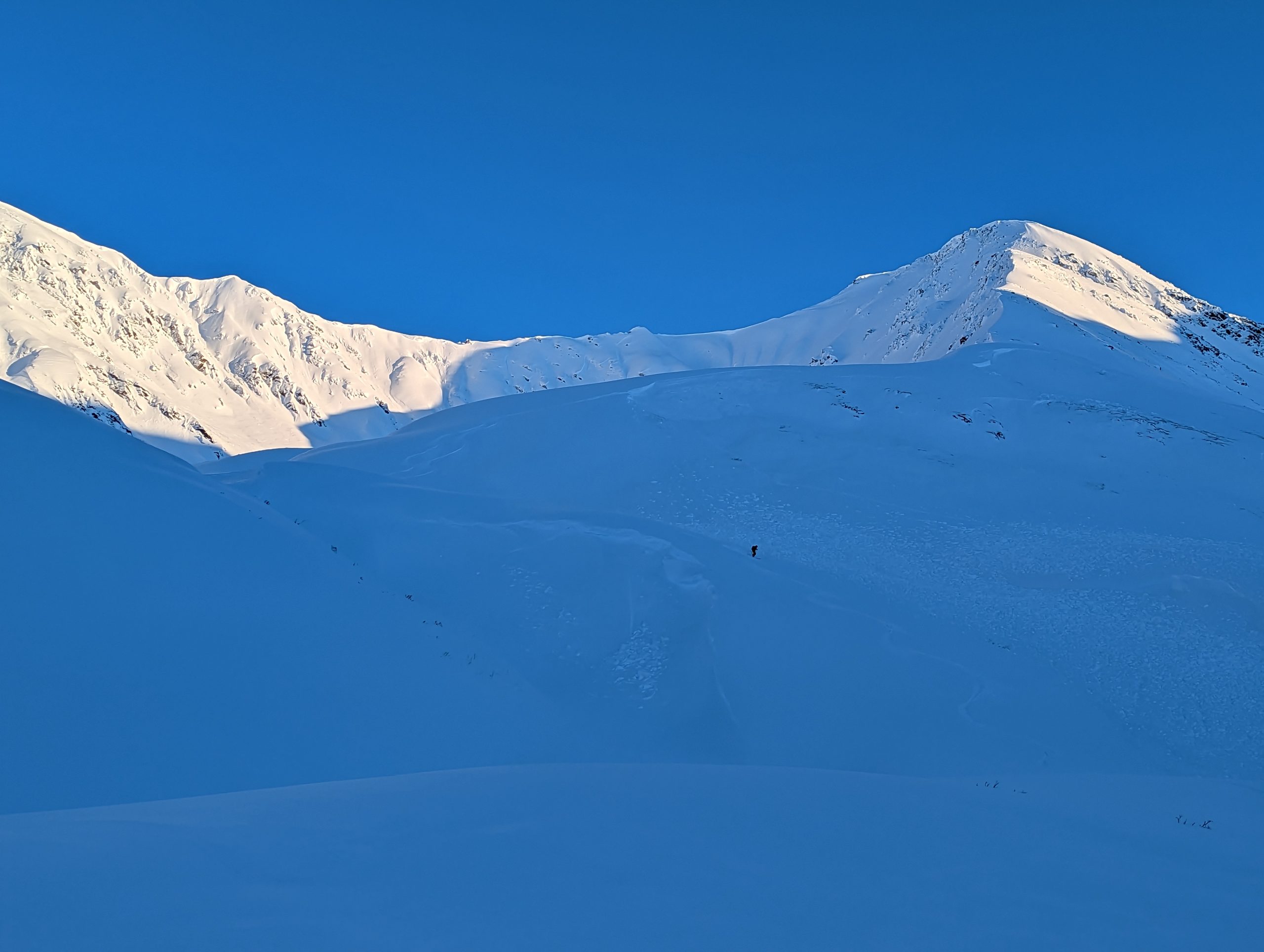 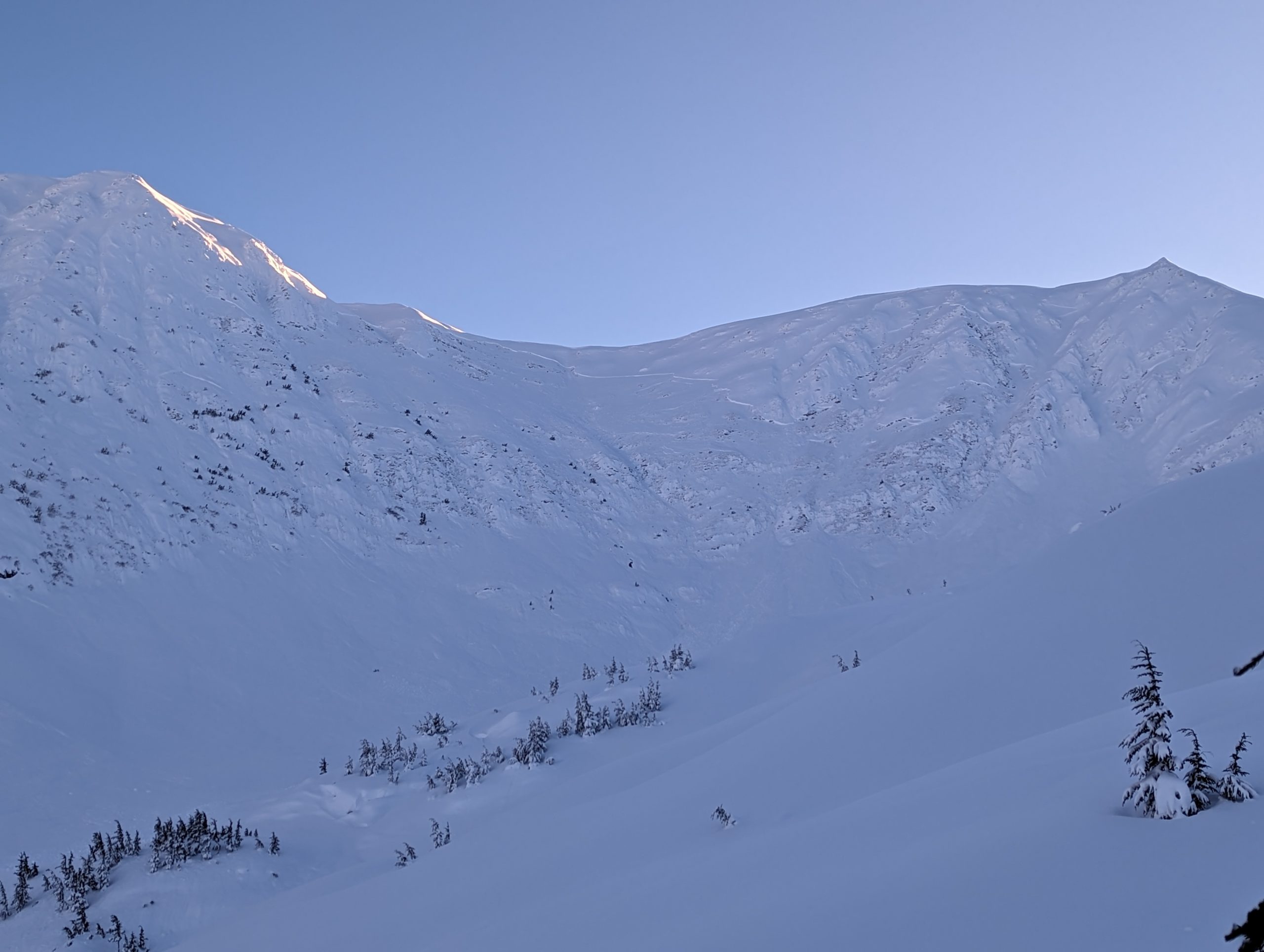 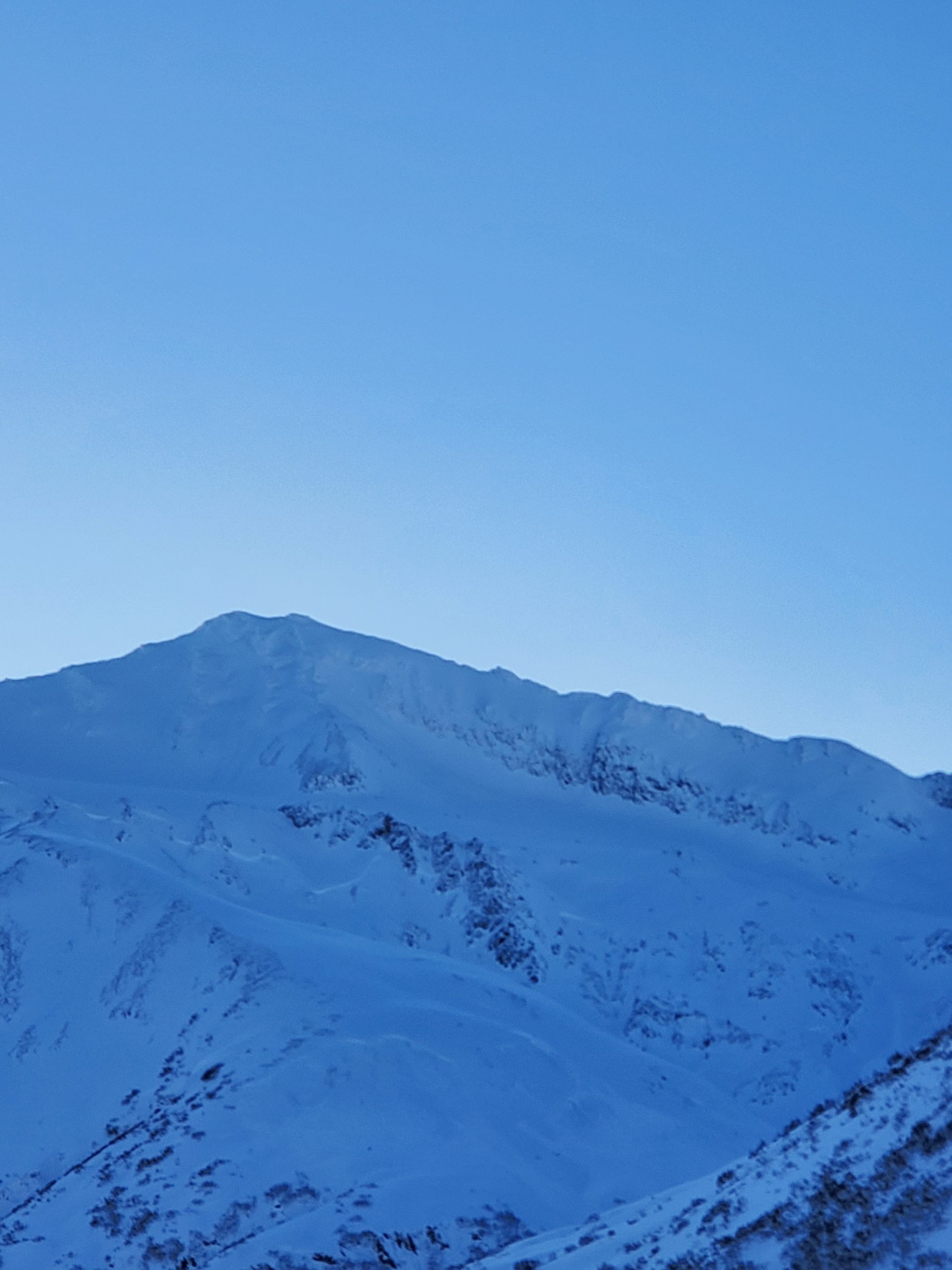 Another day of relatively quiet weather is on tap, with cloud cover increasing and moderate NW gap winds gusting up to 35 mph expected in areas that typically see outflow winds. We saw a lot of very large human triggered avalanches on Thursday that were mostly remote triggered from relatively low angle terrain (see obs here, here, and here). We also saw lots of evidence of a widespread natural avalanche cycle that likely occurred on Wednesday. Most of the largest avalanches observed in the past couple days appear to have released on a layer of facets above the Thanksgiving melt freeze crust that is buried roughly 3-6’+ deep. Triggering an avalanche on this weak layer is most likely above 2500′, but there have been some large avalanches releasing closer to 2000′ in elevation on buried weak layers from the Christmas and New Years storms.

While the likelihood of triggering one of these monster avalanches is decreasing as we get more time since the last storm, we still think it is possible for a person to trigger based on all the human triggered activity on Thursday. The consequences of being involved with one of these avalanches are serious! We recommend sticking to smaller terrain features with lower angle slopes and being aware of any steep slopes overhead. Remote triggering is likely with this weak layer, which means you could trigger an avalanche from relatively flat terrain that releases above, to the sides, or below where you are travelling. This is really important to keep in mind if you are travelling in the vicinity of other groups!

We don’t expect the NW winds to reach into the majority of the forecast area today, but the N end of Seattle Ridge is the most likely to experience these winds if they end up being stronger than expected. Wind slabs could form quickly on leeward slopes and the loading from wind transport could be enough to make deeper avalanches more likely. Be aware of any active wind loading in the area you are travelling, especially near higher elevation peaks and along Turnagain Arm.

Cornices also grew substantially with the past two storm systems and could be a potential trigger for a larger avalanche if they fall onto a steep slope below. Give these an extra wide berth and be aware of any cornices overhead, especially if you see any active wind loading today.

Yesterday: Mostly clear skies and calm to light winds averaging 0-10 mph. There was a temperature inversion in some places with air temps in the single digits at road level in Turnagain Pass and teens at upper elevations. No new snowfall.

Today: Light outflow winds from the NW are expected to pick up today with averages in the 0-10 mph range and gusts up to 35 mph in favored areas like Turnagain Arm. Cloud cover will increase throughout the day starting with high level clouds and gradually dropping as a storm system approaches. Light snowfall is expected to start overnight Saturday or Sunday morning.

Tomorrow: Light snowfall should pick up Sunday morning, with up to 6″ expected by Monday morning. There is a lot of uncertainty with the timing and intensity of this storm system because weather models have poor agreement. Temperatures should increase slightly into the 20s at mid and upper elevations and snow line between 500 – 1000′. Winds will shift to the E and speeds should increase slightly to 15-25 mph with the onset of the storm.