There is a generally LOW avalanche danger at all elevations. Although triggering an avalanche is unlikely, there are still some hazards to watch out for. Old wind slabs sitting on a crust could be found scattered about in upper elevation steep terrain. These slabs should be small and somewhat stubborn to trigger. Additionally, sluffs on steep slopes harboring several inches of loose snow over a crust may also be triggered.

Cold, calm and clear weather remains perched over Turnagain Pass. This is allowing the avalanche conditions to go into a holding pattern of sorts until the next weather system hits this weekend. With a crust and some windblown snow caping the snowpack, triggering an avalanche has become unlikely. We are now in a ‘Normal Caution’ regime, which means there are still a few issues to watch out for as the winter mountains always have some level of hazard. Remember from our basic avalanche awareness course, low danger doesn’t mean no danger.

Old wind slabs:  There could still be some small wind slabs (up to a foot thick) in the steep high elevation terrain a person could trigger. The biggest threat would be getting knocked off your feet or machine and sliding down somewhere you don’t want to go. Watch for wind drifted snow and any cracking in the snow around you.

Loose snow avalanches:  Sluffs could be triggered on steep slopes that have several inches of loose snow on a crust. These also should be relatively small.

There are other hazards out there associated with the crust, but not related to snow stability however. Travel conditions have been deemed challenging by many folks and I’ve heard words like “variable” and “sketchy”. The New Year’s crust is exposed and scoured in some areas and covered with loose snow and wind drifts in others. It can be breakable or not breakable. This can pose threats to tweaking knees or slipping and sliding down a slope. That said, I’ve also heard that there is reasonably enjoyable snow in some secret locations.

With snowfall expected this weekend, we can expect the avalanche conditions to get dicey. The snow on the crust now is turning to facets and will most likely become our next weak layer. The crust will unfortunately be a great bed surface. Heads up for the future. 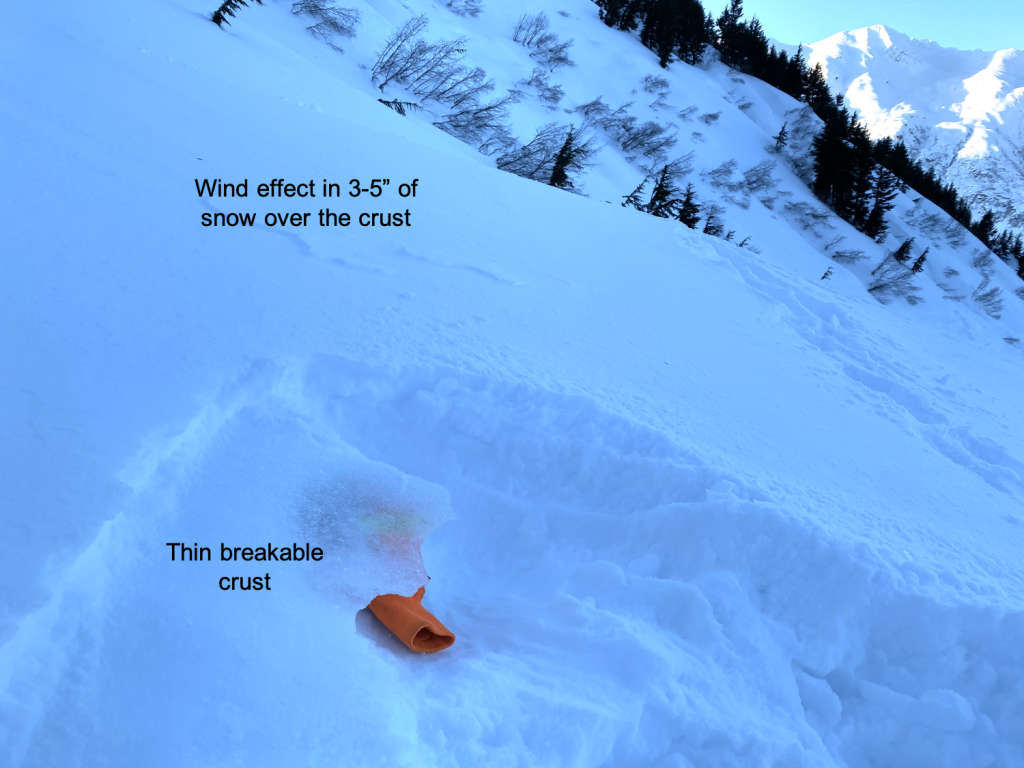 Example of where the crust is thinner and translucent, buried under just a few inches of windblown snow. Placer Valley, 1.2.22. 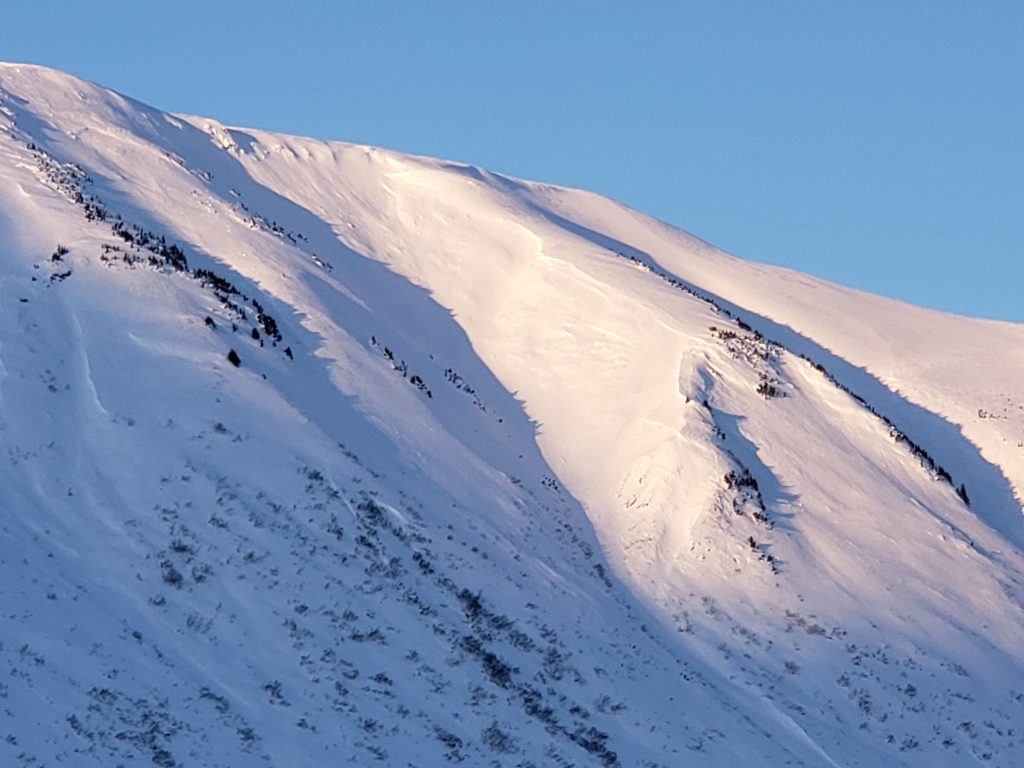 A look at the road/sunny side of Seattle Ridge (SE face). Note the old cornices and a few small crowns from the winds last weekend. Photo by Joel Curtis, 1.2.22.

Deep Persistent Slab:
The deeper snowpack still has those November facets buried about halfway down (2-5+’ deep depending on the overall pack depth). The last known avalanches on these weak layers occurred around Christmas during the warm spell and only in shallow zones did they fail (Summit Lake and Twin Peaks areas). This layer has been gaining strength and bonding. Now that the upper snowpack is frozen, they are believed to have become dormant until the pack goes through a major change (i.e., big heavy storm, springtime melt). We will continue to track these facets but may not talk about them much until they look like they might wake up.

Yesterday:  Clear and cold conditions were over the region. Temperatures hovered in the minus single digits in valley bottoms for most of the day while ridgetops were in the positive single digits. Ridgetop winds were easterly in the 5-10mph range with a few gusts into the teens.

Today:  Another sunny but cold day is on tap. An inversion is in place with valley bottom temperatures between -20 and 0F this morning and ridgetops 5-10F above zero. Some daytime warming is expected. Ridgeline winds are forecast to remain light from the east.

Tomorrow:  Sunny skies, light winds and slowing warming temperatures are expected through Friday. Chances are promising that a decent shot of snow could fall over the weekend. Models are suggesting in the 10″ range for Sunday at this time with some rain/snow mix at sea level.