The avalanche danger is MODERATE today and there is a small chance of triggering an avalanche on a weak layer buried 3-5’ deep in the snowpack at elevations up to 2500’. It will also be important to be on the lookout for lingering wind slabs in steep terrain at upper elevations, and pay attention to changing conditions later in the day as our next storm moves in tonight. The avalanche danger remains LOW below 1000’.

SUMMIT LAKE: The Summit Lake area has a thinner and weaker snowpack than Turnagain Pass. In addition to the avalanche issues mentioned above, there is still an unlikely chance a person could trigger an avalanche breaking near the ground above 2500′.

The Dec. 1 rain event formed a crust that is now buried 3-5′ deep and has started to develop weak, faceted snow in some parts of our advisory area. We have found this layer to trend towards weaker strength as you head towards the south end of Turnagain pass, and to be more concerning on the non-motorized (east) side of the road. Closer to Girdwood, we also know this layer has recently produced large avalanches when triggered with explosives during mitigation work. We have found this layer to be losing strength over time, but as the slab above it continues to get stronger, stiffer, and deeper, it is becoming more difficult to trigger an avalanche in this weak layer. This makes for a tricky problem to manage, since although there is a small likelihood of triggering an avalanche in this layer, it will be a large one if you do. The good news is that buried crust only formed up to around 2500’, so upper elevations are not plagued by the same uncertainty as middle elevations. As frustrating as it is, we still need to treat this layer with caution, especially in steep terrain (35 degrees or more) at middle elevations (1000′-2500′).

Wind Slabs: After a few days of light winds, these are becoming harder to find and more difficult to trigger. That doesn’t mean you should let your guard down, especially near ridgetops, convex rollovers, or in cross-loaded gullies. We are expecting to see winds pick up later in the day ahead of this next storm, and if that does happen we may see fresh wind slabs forming, which will be easy to trigger. Winds are expected to be slightly stronger near Seattle Ridge during the day today, so pay close attention if you are on the motorized side of the pass.

Cornices: As always, give cornices plenty of room, and limit your time traveling below them. A group traveling near Kickstep reported triggering a cornice fall on Friday.

Sluffs: Be aware of loose snow avalanches moving in steeper terrain wherever there is soft snow at the surface. These can pick up enough momentum to carry a person, and can be particularly dangerous if you are caught above terrain traps like cliffs, rocks, or gullies. In a lot of areas, this soft (weak) snow may become a bigger concern once it gets buried by this next pulse of snow tonight and into tomorrow. More on this to come. 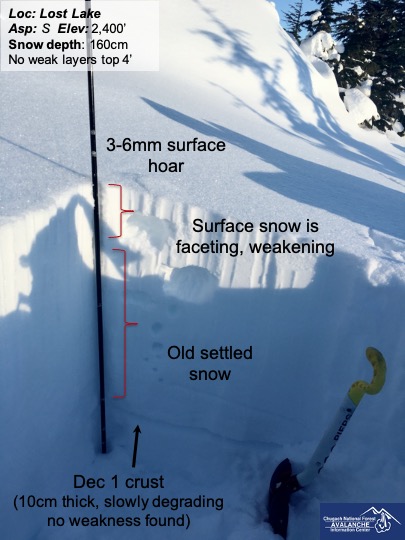 This profile from Lost Lake is similar to the snowpack in the south end of our advisory area. 01.02.2021 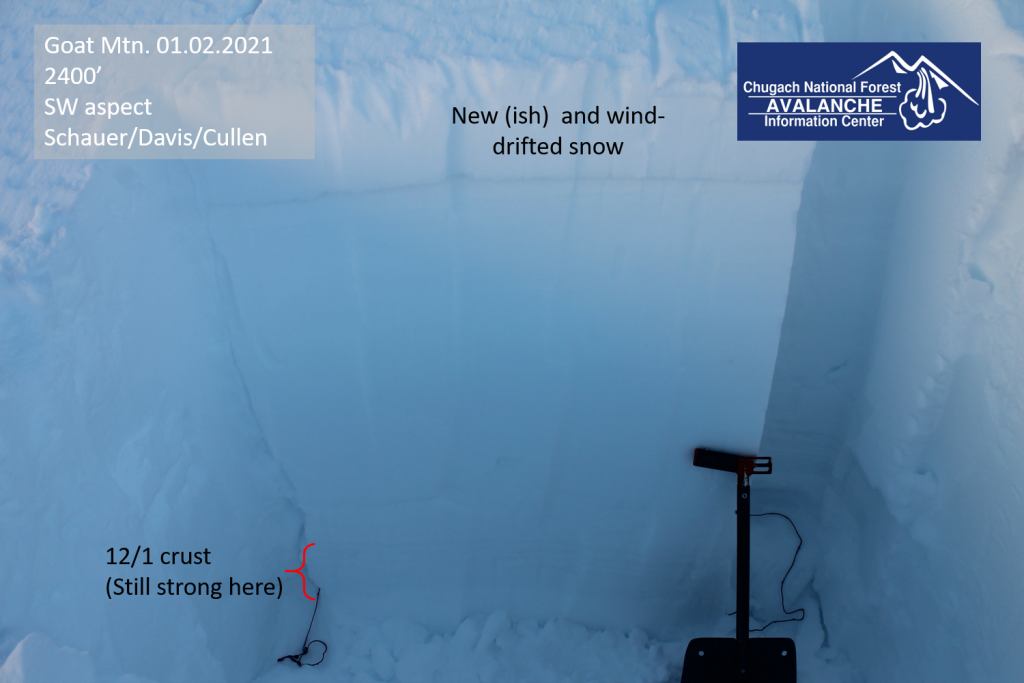 The 12/1 rain crust had not started faceting in our snowpits near Surprise Bowl as of yesterday. This layer is a concern in some, but not all places in our advisory area. 01.02.2021

Yesterday: We had another day of clear skies with calm to light winds blowing around 5 mph out of the west at ridgetops. Temperatures reached the upper teens to mid-20’s F in the morning, before gradually dropping to the mid-teens to 20 F overnight.

Today: Clouds will move in as the next storm approaches, with mostly cloudy skies by the end of the day. Winds are expected to remain light, around 5-10 mph out of the east at ridgetops, and increasing this afternoon. High temperatures are expected to be in the mid-teens at upper elevations to low 20’s at lower elevations, and will rise through tonight. Little to no precipitation is expected during the day today.

Tonight: The weather will turn back on tonight into tomorrow, with 2-6″ snow expected at upper elevations by morning and close to a foot of snow by the end of the day tomorrow. Temperatures will hover around the upper teens to mid-20’s F, and we are expecting snow to sea level. Ridgetop winds will pick up to 15-20 mph out of the southeast starting tonight, and stay in that range through tomorrow.