The avalanche danger remains MODERATE on slopes over 35° above 1,000′. Today is another day to watch for lingering wind slabs in steep terrain, cornice falls along ridgelines and keep an eye on your sluff. Additionally, at elevations between 1,000′ and 2,500′ there is a small chance of triggering a large avalanche (3-5′ deep) on weak snow developing near a crust.

SUMMIT LAKE: In addition to the avalanche issues mentioned above, there is still an unlikely chance a person could trigger an avalanche breaking near the ground above 2500′.

One human triggered wind slab was reported on the SW face of Grandaddy Pk (head of Spokane Ck) yesterday. This slab was around 30′ wide, 8″ thick and ran around 300′. Skier was not caught. It was reported to have moved fast and though on the smaller side, was big enough to catch and carry a person.

Also yesterday, a group on the lower west ridge of Kickstep (upper Lyon Ck) triggered a cornice fall around 20′ wide. No one was caught. The party noted several cracks in the snowpack along the ridge where the cornices were peeling away. 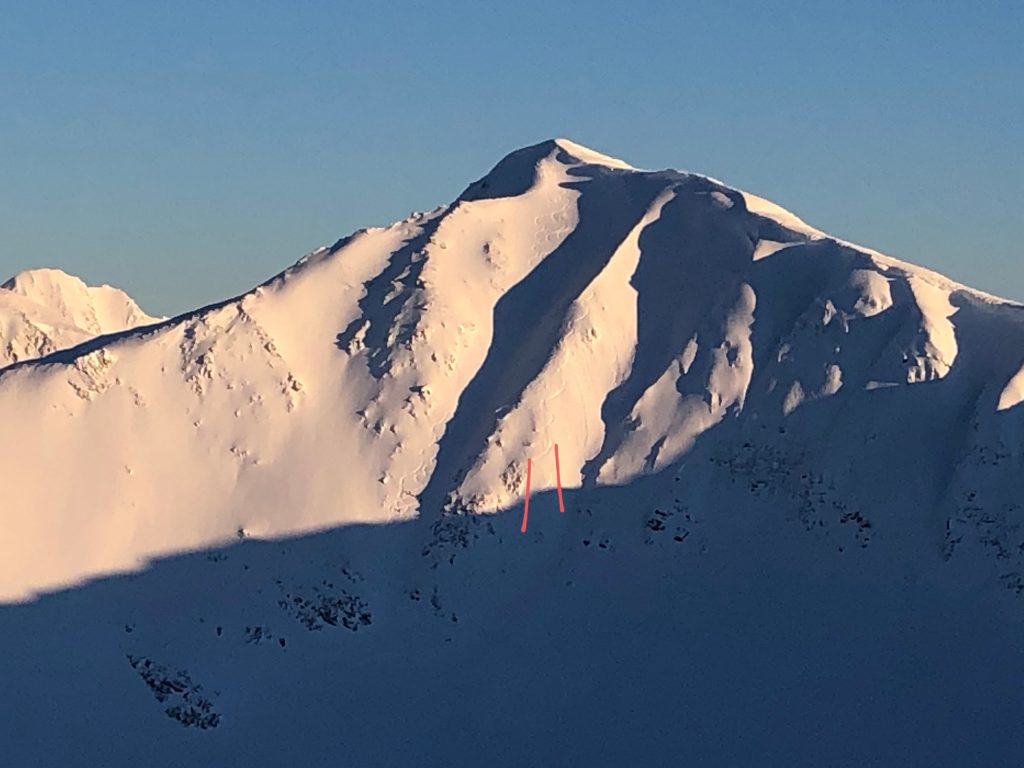 Photo by Connor Johnson of the wind slab on SW face of Grandaddy Peak taken from Pete’s North. 1.1.21. 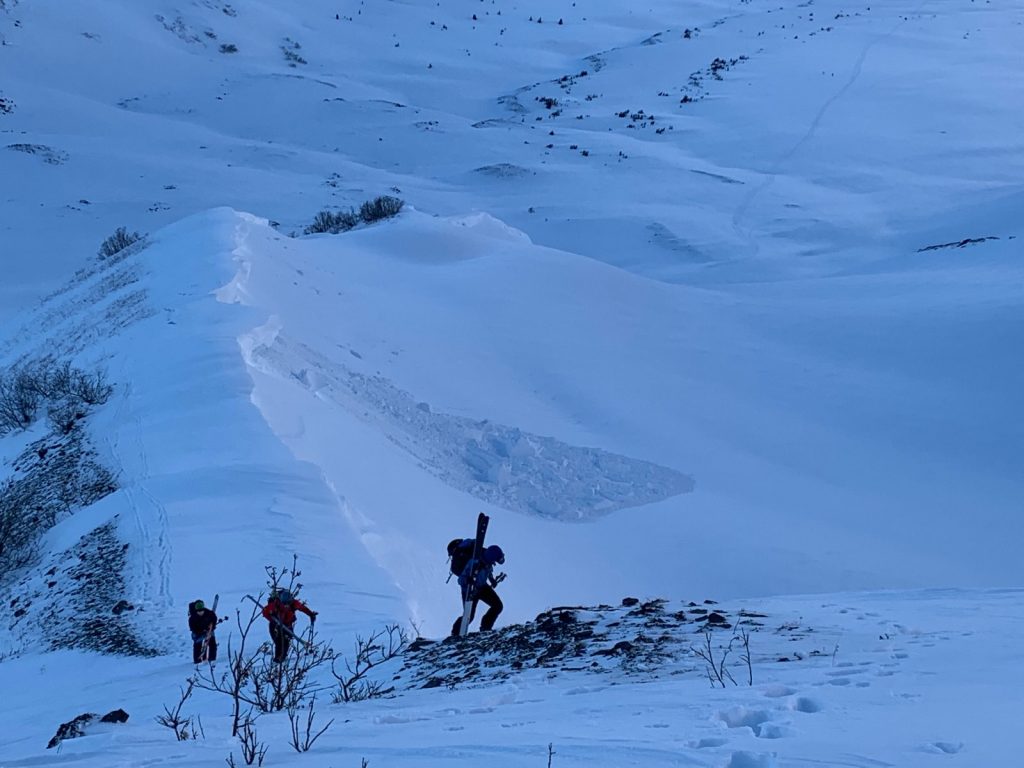 What a great few days of high pressure and quiet weather in the backcountry. And another blue sky day is on tap with light NW winds before some high clouds begin moving in tomorrow. Many folks have been out getting on all kinds of terrain and only a few instances of snow moving have been reported (a small wind slab and cornice fall mentioned above). To add to this, steep slopes are also seeing sluffs, which can be expected where loose snow exists.

In short, the Turnagain Pass forecast zone is trending to a ‘Normal Caution’ avalanche regime and LOW danger. However, there is a bit too much funny business surrounding the Dec 1st crust to write it off. This crust keeps slowly degrading and in some areas is changing into a faceted layer creating a facet/crust combination. It sits on all aspects at the mid elevations (1,000′-2,500′) and if you want to take your probe out or dig down to it, it’s generally between 3-5′ below the surface. It’s unlikely a person can trigger a large avalanche breaking on this layer, but on just the right slope in a thin area it’s not out of the question. A few thin zones in my mind are Silvertip/Twin Peaks, Lynx Creek and areas on the south end of the forecast zone to Summit Lake. Additionally, thin areas in the upper Girdwood Valley could be suspect. This kind of setup doesn’t happen that often but enough that we know it can take a solid snowpack and turn it around causing avalanche issues deep in the pack weeks after a crust is buried. Whether this will happen is still to be determined, however we want to be ready. What we can do is remember to be cautious and suspect of the mid-elevations, especially in those thinner snowpack areas.

To add to the hidden buried weak layers concerning us, we are still watching those old October facets at the bottom of the snowpack in the Summit Lake zone. This layer is from 2,500′ and above in the Alpine where the slab on top of the facets is hard and crust-free. Again, it’s unlikely a person would trigger a slab near the ground, but not out of the question in just the wrong thin spot.

Wind slabs:  Watch for lingering wind slabs in steep terrain. Cracking in the snow around you and stiff snow over softer snow will be clues to look for. Even a small wind slab triggered in high consequence zones can cause a lot of grief if knocked off our feet. As always, keep a close eye on the surface conditions and know your escape routes if a small slab happens to break under you.

Cornice falls:  As was seen yesterday, these looming snow features can break off at any time. Give them a wide berth from above and limit time under them.

Sluffs:  Sluffs are getting larger by the day with the cold weather. Keep an eye on these in the steeps.

This all said- with another travel-friendly brilliant day in the backcountry, we need to remember our safe travel protocol and good habits. That’s exposing one person at a time, having escape routes planned, watching our partners and for other groups that may be out there. 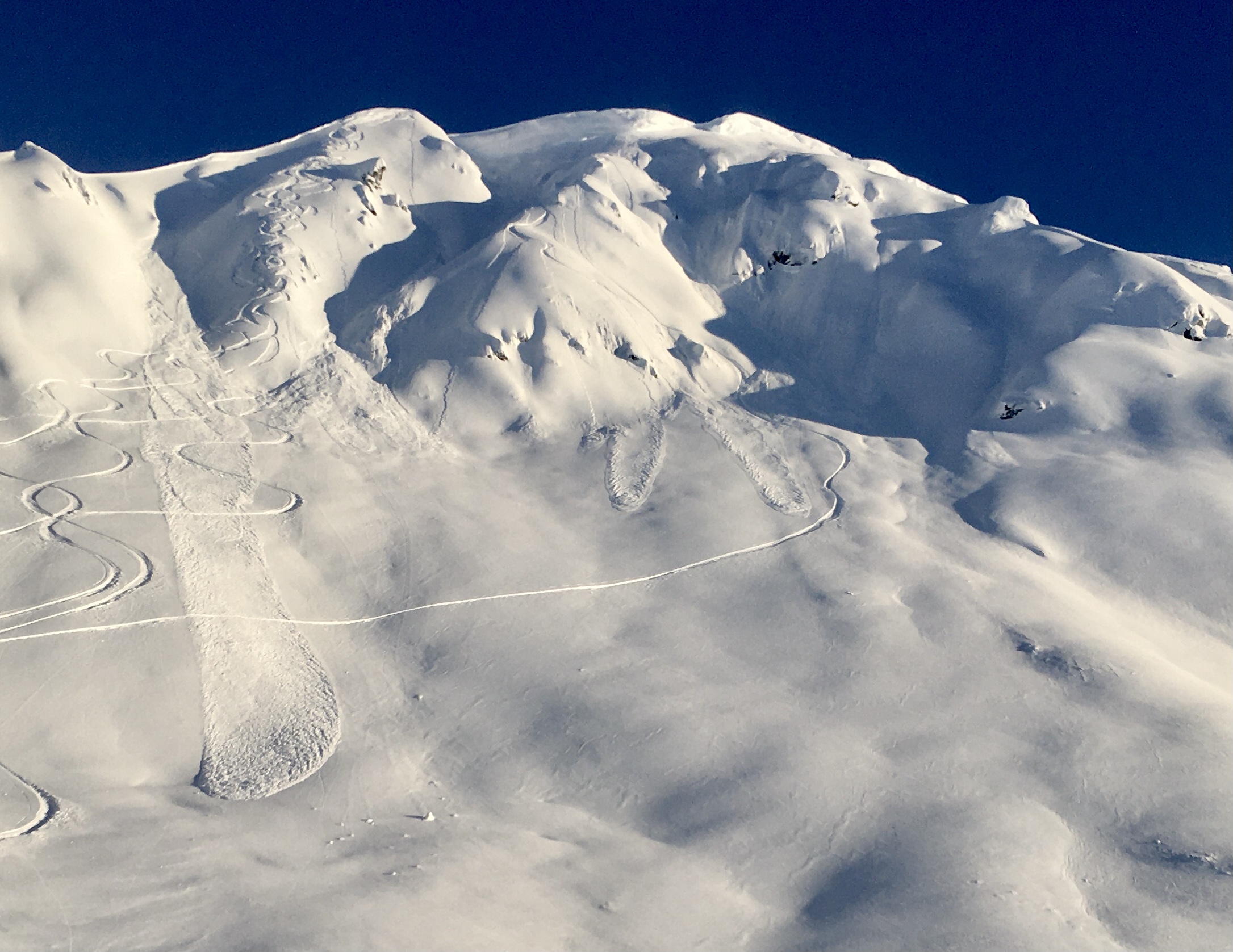 An example of sluffs is steep terrain. Back bowls of Seattle Ridge. 1.1.20. 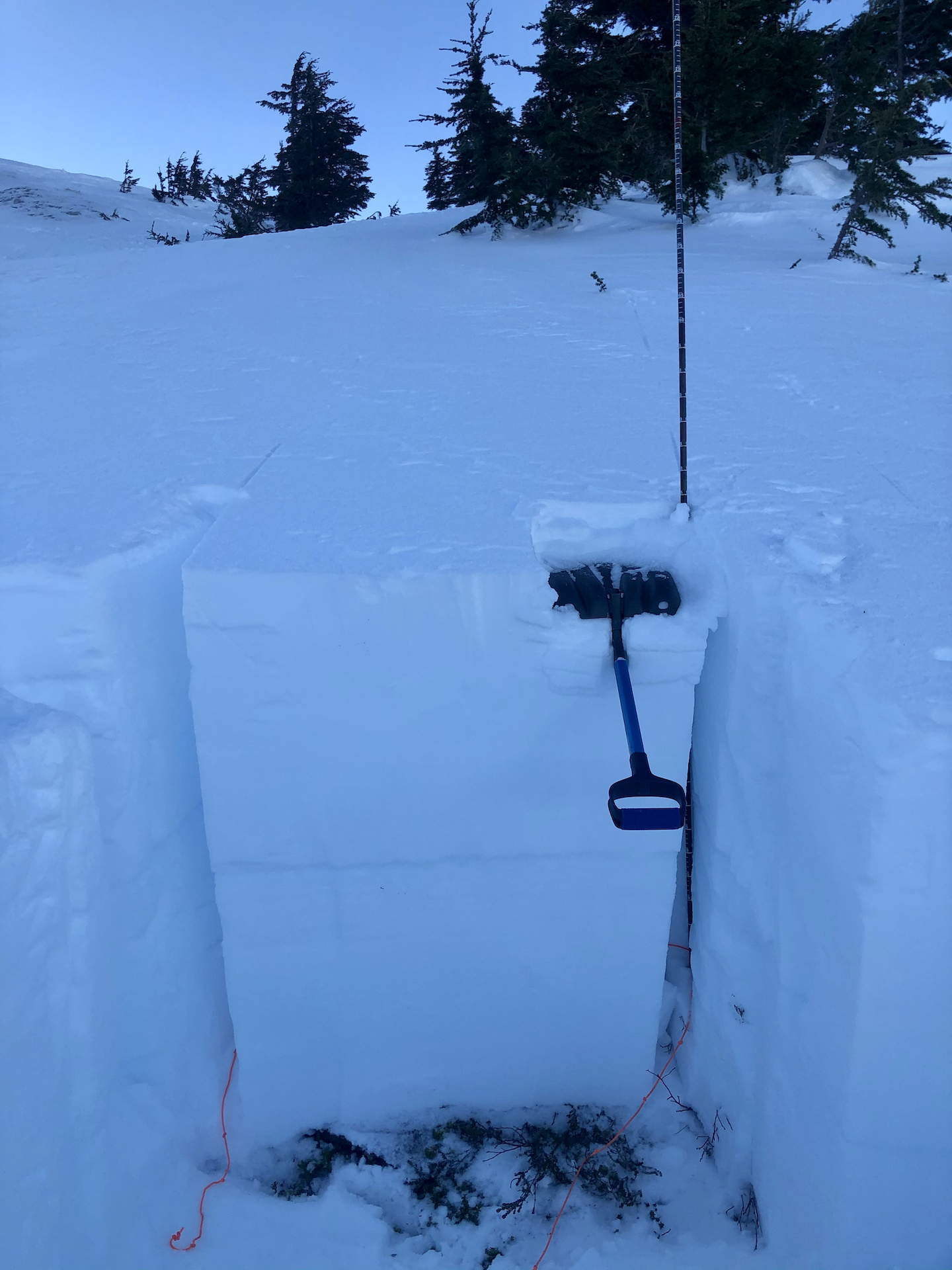 The gray line roughly in the middle of the snowpack is the Dec 1st crust. This pit was at 2100′ on Eddies Ridge and the crust here did not show signs of weakness- good sign yes, but this isn’t the case everywhere. 1.1.21. Photo: Eric Roberts

Yesterday:  Blue skies and light north and easterly winds were over the region yesterday. Temperatures were in the teens to single digits in valley bottoms while the mid and upper elevations were in the 20-25F range.

Today:  Another blue sky day is on tap for today with some valley fog near Turnagain Arm. Ridgetop winds are expected to 5-10mph from the northwest. The temperature inversion remains in place, with chilly single digit to teens in valley bottoms and right near 20F at the mid and upper elevations.

Tomorrow:  One more ‘mostly’ clear sky day is forecast for tomorrow before this brief period of high pressure gets pushed out. Ridgetop winds are expected to be light and easterly while temperatures remain chilly in the drainages and near 20F along the ridgelines. Beginning Monday we should start seeing the impacts from the record setting low pressure in the Bearing now. It looks to join with another low and moves into the Gulf bringing a chance for a snowy mid to late week.

*Weather stations not reporting due to New Year date change – will be back up on line shortly.