The avalanche danger is MODERATE above 1000′, where moderate NW winds will transport the 3-5″ of new snow into fresh wind slabs up to 1′ deep. Human triggered avalanches are possible on wind loaded features and avalanches could run fast on an icy bed surface. Look for signs of wind transport on the snow surface, hollow feeling snow, and shooting cracks to identify wind loaded features and use test slopes to determine how reactive wind slabs are before stepping into exposed terrain.

Below 1000′ the avalanche danger is LOW, where winds should be weaker and triggering an avalanche is unlikely.

The mountains got a much needed refresh of snow yesterday, with 3-5″ falling throughout the forecast area. The depth of the new snow was on the lower end towards Johnson Pass trailhead and on the higher end north of Turnagain Pass. Today outflow winds are picking up out of the NW and temperatures are dropping. Outflow winds can affect some areas of the forecast zone more than others, and Seattle Creek drainage along with areas on the southern end of the forecast zone like near Johnson Pass trailhead tend to see higher wind speeds. The primary concern is fresh wind slabs forming in areas exposed to the wind. Thanks to the melt/rain crust from last week there is not that much snow available to be transported by the wind, so wind slabs should be on the small side at up to a foot deep. It is likely that the new snow will not bond well to the icy surface that it fell on, which could make fresh wind slabs touchy to human triggers today. Look for signs of wind transport on the snow surface, hollow feeling pillows of snow, and shooting cracks or collapsing to identify recently wind loaded areas.

Even though we expect wind slabs to be on the small side today, the icy bed surface will make them run fast and could make it difficult to arrest or get out of the way of a flowing avalanche. Use caution in exposed terrain because the underlying crust is quite slick and firm in some areas. There is also a possibility that isolated pockets of surface hoar developed prior to the latest storm, which would make triggering an avalanche even easier and could lead to wider than expected propagation. So far we have only seen this in a few specific locations and don’t anticipate that it is a widespread problem. 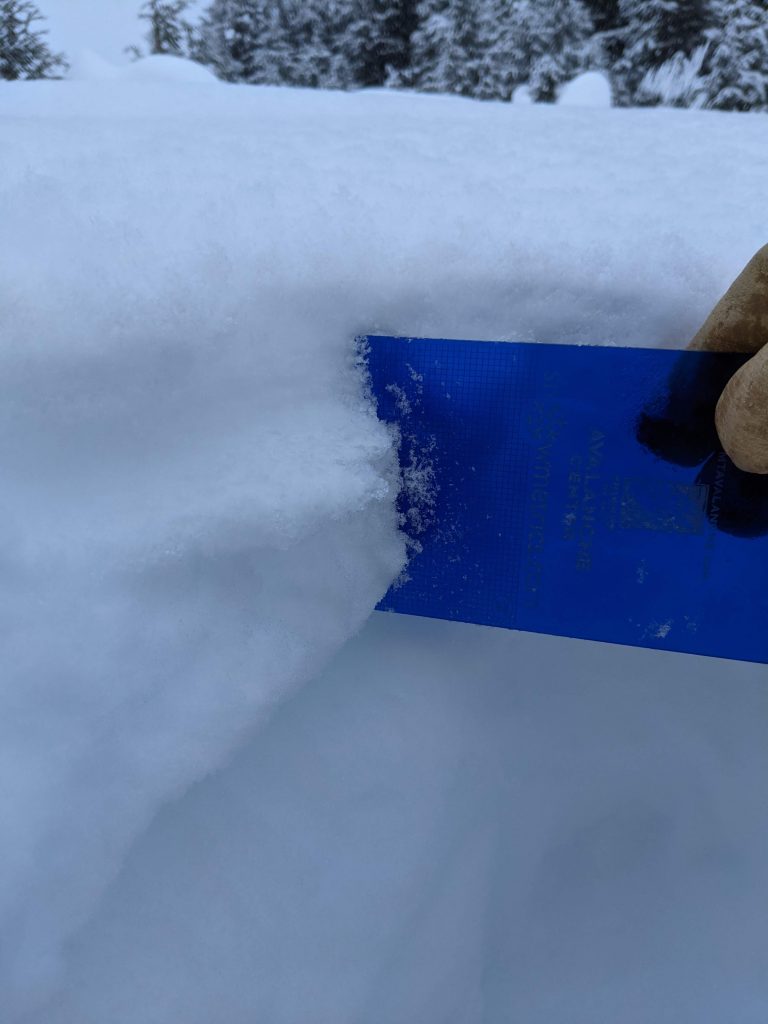 3-5″ of new snow over variable melt/rain crust. The thickness of the crust is variable but overall it seems like it is more supportable at higher elevations. Photo 12.31.21

We checked in on the November faceted layer on Tincan yesterday and found that it continues to gain strength and be mostly unreactive in stability tests. The hardness of the weak layer is increasing and the faceted grains are continuing to round. Reports of avalanche activity on this layer have also stopped since the melt/rain crust on the snow surface froze in the middle of the weak.  In areas with a thicker slab on top of the faceted layer and where the melt/rain crust is thicker it is very unlikely to trigger an avalanche on this old layer of facets. However, on the southern end of the forecast area it is feasible to find a location where the snowpack has a combination of a thin slab on top of the facets (< 2′ deep) and a thin melt/rain crust that could make it possible to trigger a deeper avalanche 2-5′ deep. We are optimistic that this layer is becoming dormant, but recognize the outside chance that it could cause a large avalanche if the perfect combination of snowpack conditions exists somewhere. 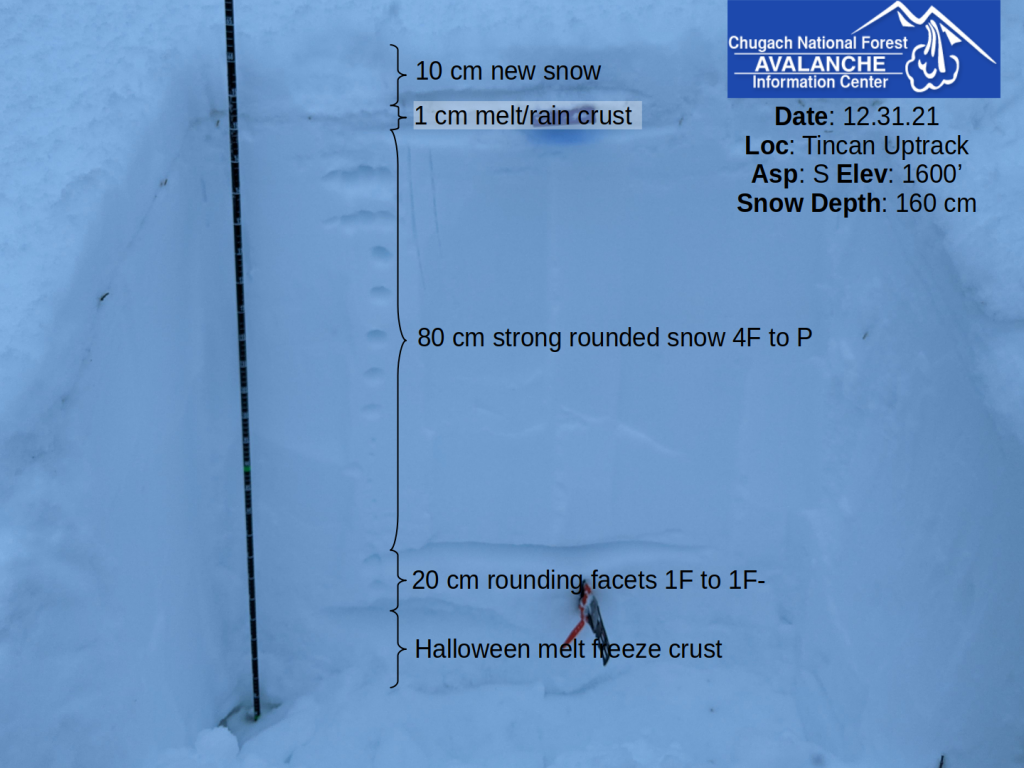 Yesterday: Moderate snowfall throughout the day with total storm accumulations around 3-5″. Light to moderate winds which switched from a E direction during the snowfall to a W direction at around 4 pm. Temperatures stayed in the teens to low twenties yesterday and started to drop in to the low teens and single digits overnight.

Today: Another round of NW outflow winds are setting up today as the low pressure system from yesterday’s snowfall moves out of the area. Temperatures should drop into the single digits and winds will pick up to the 15-30 mph range. In areas exposed to local gap winds the speed could be higher, with gusts up to 60+ mph. There is a chance of snow showers today but no new accumulation is expected.

Tomorrow: Temperatures will continue to drop tonight and into tomorrow, with highs in the positive and negative single digits expected tomorrow. Winds will remain out of the NW tomorrow but look to decrease in speed. Cold temperatures should ease off a bit early next week but no new snow is in the forecast through the middle of the week.