The avalanche danger is CONSIDERABLE above 1000′ where it’s likely for a human to trigger a large and dangerous avalanche.  Wind slabs and storm slabs up to 3′ thick are our primary concern and could be triggered on the slope itself or from below, above or near the slope.  Cornices have grown and remain a hazard.  Very conservative terrain management and decision making is advised.

UPDATE:  The lower elevation band, below 1,000′, the avalanche danger is CONSIDERABLE for 12-18″ of new snow that fell last night. Winds slabs in areas with wind effect and sluffing should be expected.

Yesterdays rain and rapid warming contributed to numerous large natural avalanches being reported in upper Girdwood and Crow Creek Valley, through the Portage Valley and near Summit lake.  There was also one skier triggered slab avalanche on Tincan above treeline on a small(ish) rollover. This slab was 2 feet deep and 100 feet wide running 150 feet down. No one was caught.

With limited visibility yesterday, it’s unknown but suspected that many of the natural avalanches initiated in both alpine and treeline elevations, with debris running to valley bottoms in some cases. 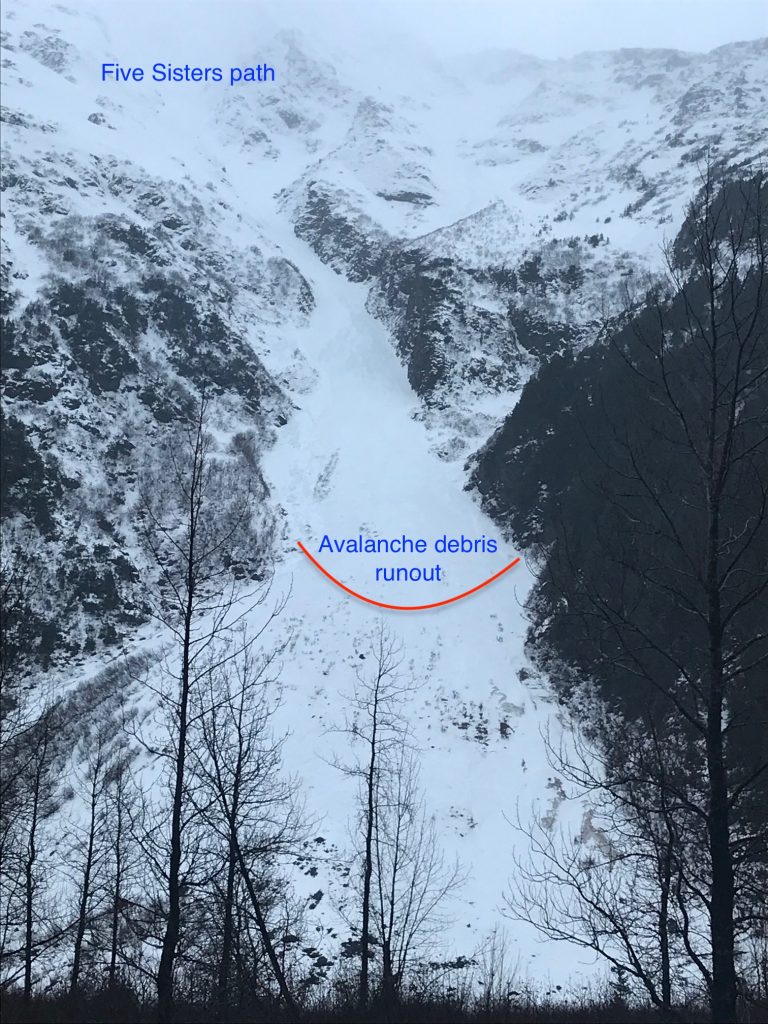 Happy New Year from all of us at the CNFAIC!

Yesterday the advisory area experienced a rapid warming event in conjunction with rain up to 2200′.  This additional load tipped the balance on many steep slopes causing numerous large avalanches.  Last night, winds picked up and rain shifted to snow as the temperatures suddenly dropped into the teens and snow fell to sea level. Over the past 24-hours the Alpine has seen 15 – 25″+ of new snow in Girdwood Valley and Turnagain Pass. Summit Lake is estimated at 8-10″ of snow in the Alpine while Portage Valley was the big winner with over 4′ of snow near Portage Pass.

Today, temperatures will move toward the single digits and winds should blow from 15-25mph. This may contribute to the high wind effect over the past day and continue to actively load slopes on the lee of ridges and gullies. The new load of snow from the past few storms sits on top of weak snow 2-3′ deep along with a documented weak layer of buried surface hoar from Solstice.  Although we have cooling temperatures, the snowpack is still adjusting to the load and large slab avalanches are likely to be triggered. The snowpack set-up such that remote triggering a large slab is possible. This means triggering an avalanche from below, above or adjacent to the slope.

Very cautious route-finding is essential today. There were several observers who experienced long shooting cracks and large wumpfing yesterday and this will likely be the case again today.  These are clear indicators for us to reconsider our route and plan. These and other red flags should be up front in our minds:

Cornices:  Strong winds and new snow have further developed the cornices throughout the region. With such varying layers and densities within the snow and wind cycles, it’s prudent to give cornices extra caution- limit your time beneath them, and give them a wide margin.

Yesterday: Cloudy skies prevailed yesterday as warm storm moved through. Rain fell into the evening up to 2,200′ before the temperatures dropped into the teens F overnight.  Snow accumulation from 10-20″ near 1000′ and an estimated 15-25″ or more in the Alpine.  Temperatures ranged from 40°Fs at sea level to mid 20°Fs at ridgetops. Winds were from the east at 20 to 40 mph, gusting to 60mph.

Today: Cloudy skies today with a chance for some partial clearing as the storm moves out. Temperatures will continue to drop toward a low tonight of  6°F, with snow accumulations of 1-3″ near 1000′.   Temperatures will likely range from 20°Fs at sea level to single digits °Fs at ridgetops. Winds will be from the southeast at 15 to 25 mph, gusts possible to 40mph.

Tomorrow: Cloudy with a chance of snow flurries all day and into the evening.  Temperatures will remain in the teens to a low near 5°F and winds will be out of the southeast at 5 to 10 mph.