Synopsis:
The afternoon of December 2nd, two skiers traveled the standard route up Eddie’s ridge in Turnagain Pass. On a final steep pitch before the top of the common westerly ski line, an avalanche was triggered at 12:20 pm (2816’). The avalanche was triggered on the apex of the ridge and propagated down and around to the much larger slope on the SW aspect. The avalanche was about 1000’ wide and ran to the valley floor 1700’ below. The skier was caught and carried 50’ vertical to the bottom of the relatively small slope they were ascending. They were not fully buried and able to self-extricate. This avalanche was one of the first significant avalanches in a cycle of large human triggered avalanches in Turnagain Pass.

Snowfall data is from the Center Ridge SNOTEL (1880’) located 2.5 miles SW. Temperature and wind data is from the Sunburst Weather Station (3812’) located 3.5 miles SW. At noon on December 2nd the skies were clear, and the temperature was 3°F with 2mph winds gusting to 4mph from the west. There was no new snow and the wind averaged below 5mph for the previous 24 hrs. There was 5” of new snow in the previous 60 hrs.

-Halloween Storm Cycle and Crust Formation
The Halloween Storm was a historic precipitation event for South Central Alaska. From October 29th-November 4th Turnagain pass received 8.5” of rain at 1,000’ and 7’ plus of snow above 3,000‘. Just up the road Portage received 28” of rain and Girdwood 19” of rain in 5 days. After the storm passed, the temperature fell below freezing and a very stout crust formed at mid and lower elevations. The crust was thinner and layered at higher elevations. This crust became a bed surface for many large avalanches in the weeks to come. This crust was the bed surface for a D3 avalanche from an air blast at Alyeska Resort as late as Jan 29th, 2022. Also, a skier triggered D1.5 in Summit on February 9th, 2022.

-Snow and Weather from November 7 to November 21
In true Alaska style, after the Halloween storm a big swing brought low temperatures and calm winds. Temperature averaged in the low teens to single digits and for the next two weeks only 8” of new snow fell. Near surface faceting and surface hoar formation was observed for 11 of the 15 days in this period by the Chugach National Forest Avalanche Information Center (CNFAIC) staff. On November 17th the CNFAIC staff stated, “Despite observations of widespread weak layers in the advisory area (surface hoar, near surface facets) there has been a lack of avalanche activity due to the fact that the snow on top of these weak layers has not had enough strength to act as a slab.” The 8” of snow over the crust faceted quickly due to the cold and clear weather, but also because of so much available moisture from the Halloween Storm still trapped in the snowpack. The faceting was also exacerbated by a steep temperature gradient with the crust being close to 0°c compared to the new cold snow and the colder air just above it.

-Snow and weather from November 22 to November 30
Precipitation and snowy weather returned the night of November 22nd. We woke up to 12-14” of low-density snow then proceeded to get another 35” of snow and almost 4” of SWE over the next week. Much of this snow was low density and took time to form into a proper slab. As this snow settled, wind deposited steeper areas saw naturals and human triggered avalanches first. Over time, the snow settled into a slab able to communicate fractures and the problem became more widespread and destructive. This poor snowpack structure was the cause for a significant human triggered avalanche cycle. 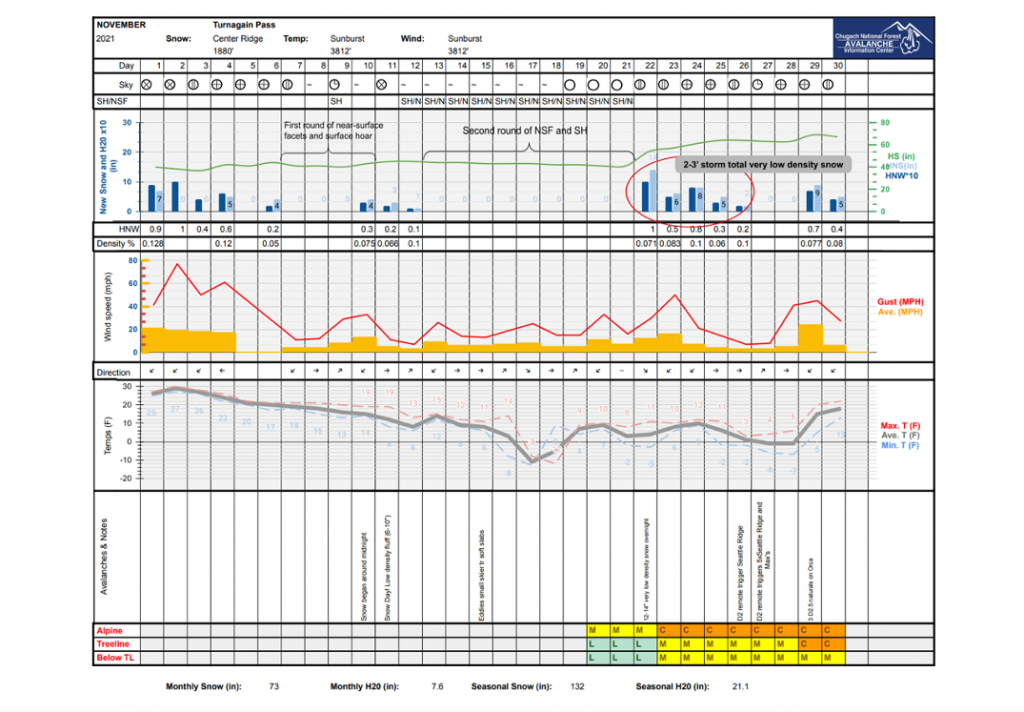 On December 2nd, 2021, a party of two ascended the common up track of Eddie’s Ridge. This is a relatively busy backcountry ski zone because of its easy approach and great skiing. It is a close second or third only to nearby Tincan and Sunburst in local popularity. Both skiers in the group are working avalanche professionals with many years of experience in complex avalanche terrain and are very well respected in the community. The party of two are good friends and work together as ski guides. Their stated goal of the day was to step out into larger terrain. The group was aware of the poor structure to the snowpack. The group did underestimate the continuity of the slab/weak layer combination and its ability to produce an avalanche of this size. There was little information about the propagation propensity of this slab at that time. This avalanche was one of the first in this cycle and so the jury was still out on how this new snow would react to the rest of the existing snowpack. CNFAIC stated in their avalanche forecast on December 2nd that, “There have not been many folks traveling in the mountains since the latest storm to test the reactivity of our weak layers, so we have some uncertainty about how sensitive they are to triggering.”

On the car ride up they discussed different options for skiing that day and decided on Eddie’s Ridge, and possibly some of the more exposed SW facing terrain. On the skin up they were followed by another party of two who they briefly chatted with. Skier 1 ascended the final steep section of the ridge, using the apex of the ridge for safety. Skier 2 held back on the flat part of the ridge staying in a good safe zone. Skier 2 held back for a considerable amount of time and distance. Skier 2 also encouraged Skier 1 to favor the skinners left and apex of the ridge. His reasoning was, “If we are wrong, we want to be wrong over there”, referring to the smaller slope to the skinners left. Skier 1 heard and felt a large collapse. The snow above and all around him fractured. Since he was in touring mode, he had little control and fell forward and was swept to the bottom of the slope staying on top of the small sized debris. The debris pile on the NNW aspect, skinners left, was estimated to be 6-8’ deep. The majority of the avalanche broke on the skinner’s right with debris running over 1,500’, depth of debris is unknown. 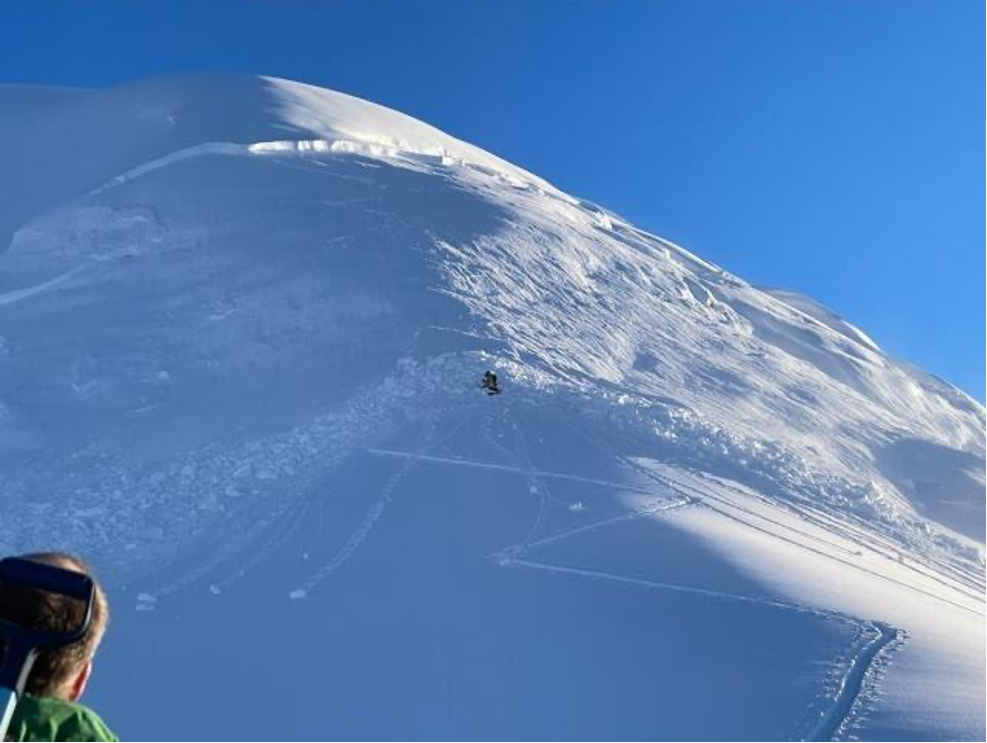 “Where skinner came to rest” Courtesy of George Creighton 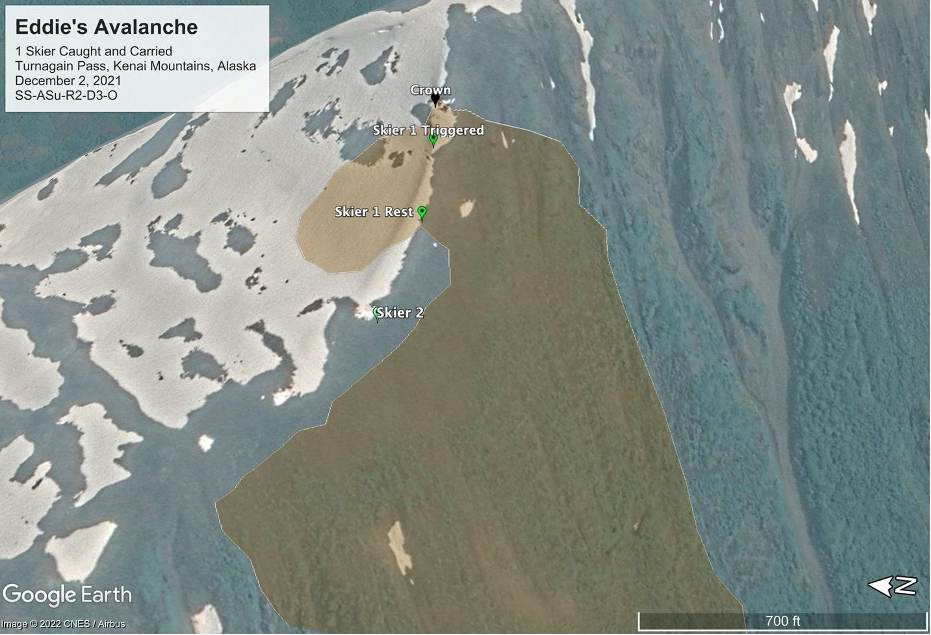 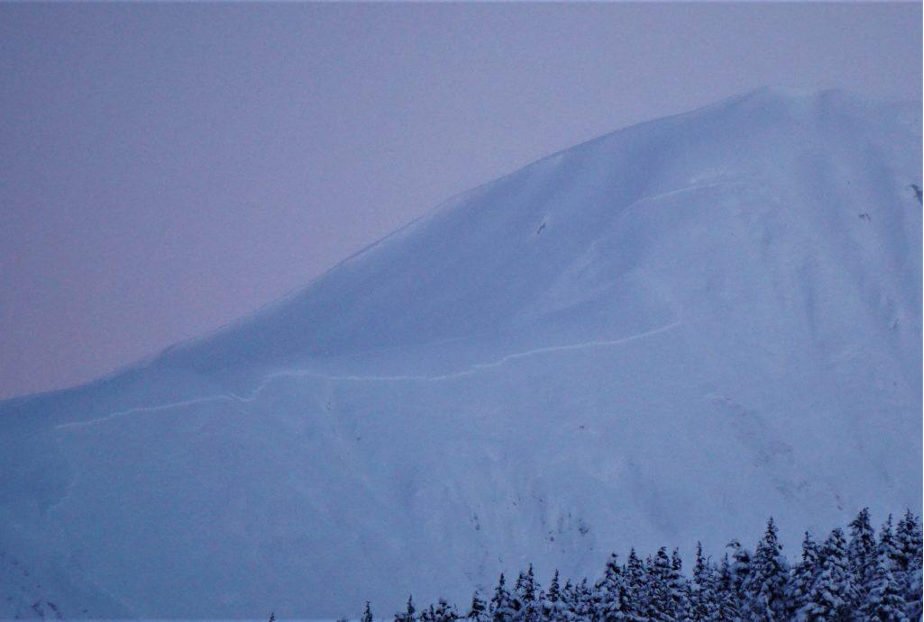 “Closeup of the crown from the Tincan Parking lot.” Photo courtesy of Chugach NF Avalanche Center 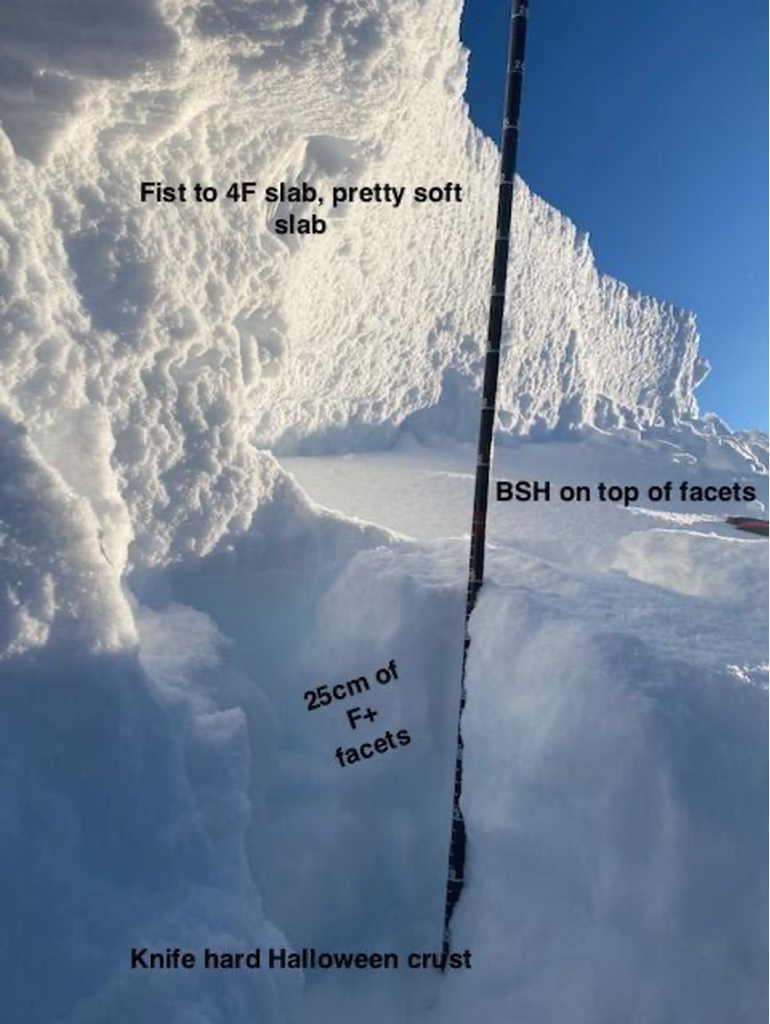 In areas that are well forecasted by professionals, but not necessarily heavily traveled; Do we put too much weight into a few avalanche observations? Do we then feel we are working in an information vacuum when no significant avalanche/field observations are made? The difference between these two extremes is only a handful of observations in a large forecast area.

Continuity is the new addition to the stability wheel, referring to spatial variability or spatial uniformity of the snowpack and individual layers. With high continuity of the snowpack, few observations can carry much more weight. On December 2nd, one avalanche on Eddies Ridge made a large impact on the perceived avalanche danger. It might be obvious to just think it was significant because it was the first one in this cycle. The significance of this event was in part due to the snowpack having region wide continuity and little other information available on recent avalanche activity. This one avalanche put the community back on its heels and the impact was backed up by many large human triggered avalanches in the following days.

Safe travel techniques work: Skier 2 held back very far, and it paid off. Skier 1 estimated post incident that Skier 2 waited for about 15 minutes while Skier 1 ascended the final pitch. This is easier said than done, especially when it’s 3°F. Skier 1 chose to ascend the apex of the ridge so if there was a slide the debris would flow to either side of the ridge. Skier 2 also encouraged Skier 1 to favor the skinners left and apex of the ridge. His reasoning was, “If we are wrong, we want to be wrong over there”, referring to the smaller slope to the skinners left. Safe travel techniques can be inconvenient and slow us down when we travel in the mountains. As this event proves, they also work and continue to save lives.

The party of two didn’t think there was enough slab structure to make an avalanche of that size. Snow and avalanche conditions can change even when there is no new load to the snowpack. This is from the metamorphic process that starts when the snow hits the ground. It may not be immediately as obvious as the red flags or following an acronym like ALPTRUTH, but it is a constant change in the snowpack that can increase the avalanche danger.

Avalanche professionals are constantly asking themselves and their partners if there is a slab. Is it slabby? It’s getting a little more slabby! Not much of a slab here! It might just be good skiing… For avalanche professionals every alarm in our brains go off when it feels slabby. Very soft slabs are more difficult to identify because they are more subtle. The density changes we are always looking for are less obvious.

The last lesson of the Eddie’s Ridge avalanche is that in very soft snow conditions with poor structure maybe we can’t rely on our gut as much. Unfortunately, the standard travel tests are less effective at alerting us to avalanche sensitivity in soft snow interfaces. Finally, Persistent weak layers are tricky and will always be dangerous.

Published with minor edits by Chugach NF Avalanche Center – staff@chugachavache.org
Thank you to Steven for compiling this report and to the individuals involved for sharing their experience and thoughts afterward.