Date
Fri, January 10th, 2020
Activity
Snowboard
Fatalities
0
Summary
Three snowboarders traveling along the Crow Pass Trail triggered a hard slab avalanche. Two group members were caught, one person was fully buried and one was partially buried. They were able to effect a successful companion rescue with minor injuries sustained by the person that was fully buried. The group hiked out to the trailhead.
Accident Report

A non-fatal avalanche involvement occurred along the Crow Pass summer hiking trail in the evening of Friday, January 10th. We would like to thank the party involved for sharing their story and are very thankful for the positive outcome.

EVENTS AND RESCUE
Just after 2pm on Friday, January 10th, 2020 three snowboarders and a dog headed up the Crow Pass Trail from the end of the Crow Creek Road just outside of Girdwood, AK. The group was on splitboards and had heavy packs (~40lbs) with overnight gear; they were headed to the Crow Pass cabin. They followed the general path of the summer trail and are believed to have been the first people in the area since the last snowfall seven days prior. The group was aware of the avalanche danger and discussed the hazard in the area and ways to manage it. They took note of the northwest winds along the high peaks that were transporting snow and how this could affect their route and plans. Each member had an avalanche beacon, probe and shovel. All three members had winter backcountry travel experience, two knew the area they were headed for and two had formal Level 1 avalanche training.

Roughly 2 miles from the signed summer trailhead and a mile before the Crow Pass cabin the group began to ascend a steep slope using the common backcountry travel practice of spacing themselves out to minimize risk. They knew this was the crux of their route. It was just after dark and the full moon was providing enough light that headlamps were not needed. The slope the group was on ended further below in a tight rocky gorge (the ‘waterfall’ area in the summer). As they ascended, the snow was so hard and icy that the second and third person (Boarder 2 and 3 respectively) removed their splitboards and began to kick steps on foot. Only the edge of the first person’s (Boarder 1) splitboard was biting into the snow and the others’ boot toes were barely biting into it as well. They reached a point near the final section of the slope where they began traversing and found themselves closer together, around 15′ between each person. At this point, around 5:30pm, they felt a collapse and shortly after (a few seconds) the slope fractured and began to slide. It released an unknown distance above them. Boarder 2 saw Boarder 1, in front of them, get swept down the slope as they themselves were caught. Boarder 3 was not caught and left standing near the crown.

Boarder 1 was carried all the way down the slope, around 500 feet. They were partially buried to their torso/neck region with one arm free in a standing position. They were uninjured but lost their poles. Boarder 2 was able to fight their way out of the debris to the side, yet the slope was so hard, slick and steep that they continued sliding down. Boarder 2 slid over rocks and small cliffs, hitting their head at times, before being forced back into the debris further down the slope. Boarder 2 was not wearing a helmet. Boarder 2’s pack strap was torn off, jacket was ripped open and their beacon was pulled out of its harness, yet still connected with the cord. Before coming to a stop, Boarder 2 was able to move their hand in front of their mouth and create a small air space. They came to a rest fully buried 4 feet deep and horizontal on their right side. Boarder 2 had lost their poles, hat and one half of their splitboard.

Boarder 1’s pack was still on and they were able to access their shovel and dig themselves out. Boarder 3 was still near the crown of the avalanche and looking for a safe way down, which was not found and Boarder 3 remained in place. Boarder 1 had heard moaning sounds just 15-20 feet away under the debris shortly after the slide ended. They knew this was Boarder 2 because the dog appeared next to Boarder 1 and Boarder 1 was in voice contact with Boarder 3. Boarder 1 turned their beacon to receive, picked up a signal right away and got a probe strike quickly. The probe struck Boarder 2’s shoulder and Boarder 1 was able to dig and expose Boarder 2’s airway. At this point Boarder 2 was unresponsive and breathing. Boarder 1, concerned about injury to Boarder 2, called on a cell phone with 1 bar to a friend stating their situation and concern for Boarder 2. Boarder 1 then continued to free Boarder 2 and Boarder 2 began to respond and gain consciousness. Boarder 1 wrapped Boarder 2 in their coat and sleeping bag and took measures to help warm them. Boarder 2 is estimated to have been buried for around 10 minutes.

After Boarder 2 had been cared for, Boarders 1 and 2 ascended a slick and steep route just down drainage of the slide and met up with Boarder 3. Once all together, Boarder 1 sent a message using their inReach device, which had been too cold to use prior, to communicate with their friend that all were OK and they were headed out. They fixed Boarder 2’s pack and began finding the safest route possible back down the drainage. The group made it back to the parking lot around 11pm.

Due to the poor cellular coverage and difficulty with the inReach device, the messages that the group was all OK were not transmitted completely and a formal search was conducted. The Alaska State Troopers, U.S. Forest Service Law Enforcement, the Air National Guard, Girdwood Fire Department and Alyeska Ski Patrol responded to the scene. It was not until the group reached the trailhead that it was confirmed all were safe.

Discussion:  The avalanche is believed to have been a very hard and older wind slab that sat on weak faceted snow (persistent slab). The slope appeared to have already slid and had an ‘icy’ surface. The crown was estimated to be around 3 feet thick and 50’ wide. It ran around 500’ vertical feet on a slope averaging between 40-50 degrees. It is unknown exactly how the slab was triggered, whether it was the total weight of the group or if someone hit just the wrong spot on the slab. CNFAIC avalanche specialists attempted to travel to the site the following day but were turned around due to concerns of triggering a similar type of avalanche along the trail. The specialists found that the drainage had seen significant wind effect over the past several days with scoured and wind loaded slopes. The slabs they encountered were sitting on weak faceted snow over a hard melt-freeze crust. This snowpack structure can be especially tricky and triggering an avalanche that breaks above a person/group was possible. This same setup is suspected to be similar to that at the site of the avalanche.

Five days after the incident, aerial photos were taken of the site. The avalanche was obscured by a few inches of wind-blown snow that had fallen in the interim. Despite this, the avalanche crown, path and debris were still evident. Those photos are attached to this report.

WEATHER
The avalanche occurred during a cold and clear sky period with high-pressure over the region. The last snowfall in the area was 7 days prior on January 2nd. This day ended a multi-day storm that deposited roughly 3-5 feet of snow in the higher elevations. There is no representative weather station nearby to have truly accurate weather data for the drainage.

Two days before the incident, an increase in northwest ridgetop winds occurred region-wide and are believed to have funneled down drainage, affecting the area. After a short break in the general wind pattern, another pulse of northwest wind was seen on the morning of the avalanche. These winds created some plumes along peaks in the area and are also believed to have funneled down through the drainage. Temperatures in the drainage had been very cold for the week prior to the incident (-20°F to 0°F). On the evening of the avalanche the temperature was between -15°F and -5°F.

AVALANCHE DANGER
The Crow Pass area sits on the furthest north periphery of the Chugach National Forest Avalanche Center’s Turnagain Pass forecast zone. The avalanche danger was rated MODERATE for the possibility of a person triggering a large persistent slab avalanche along with a small to large wind slab avalanche. Forecast link HERE.

HISTORY
An avalanche fatality occurred in a similar location on Nov, 24th 1997. That report can be found HERE. 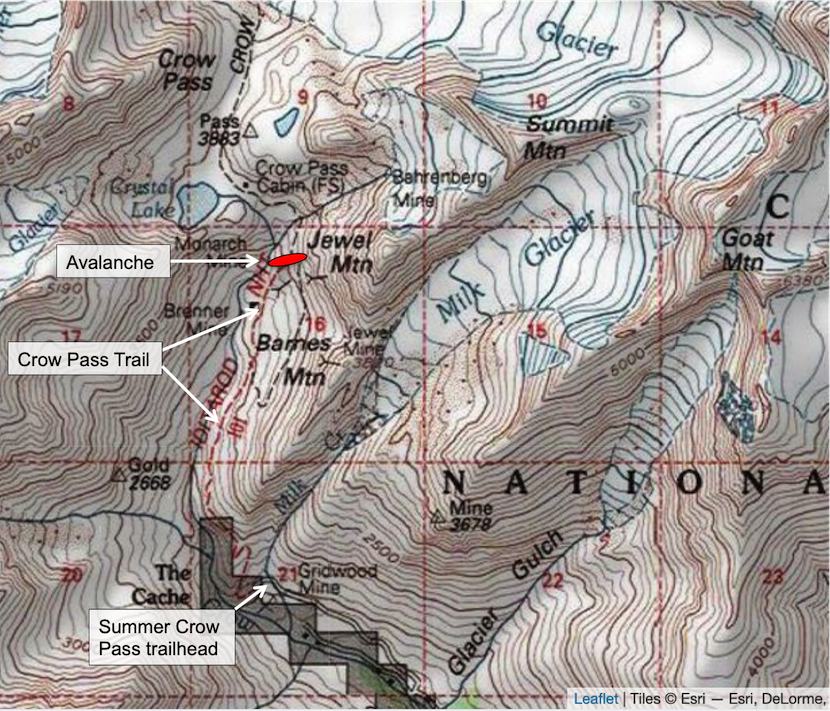 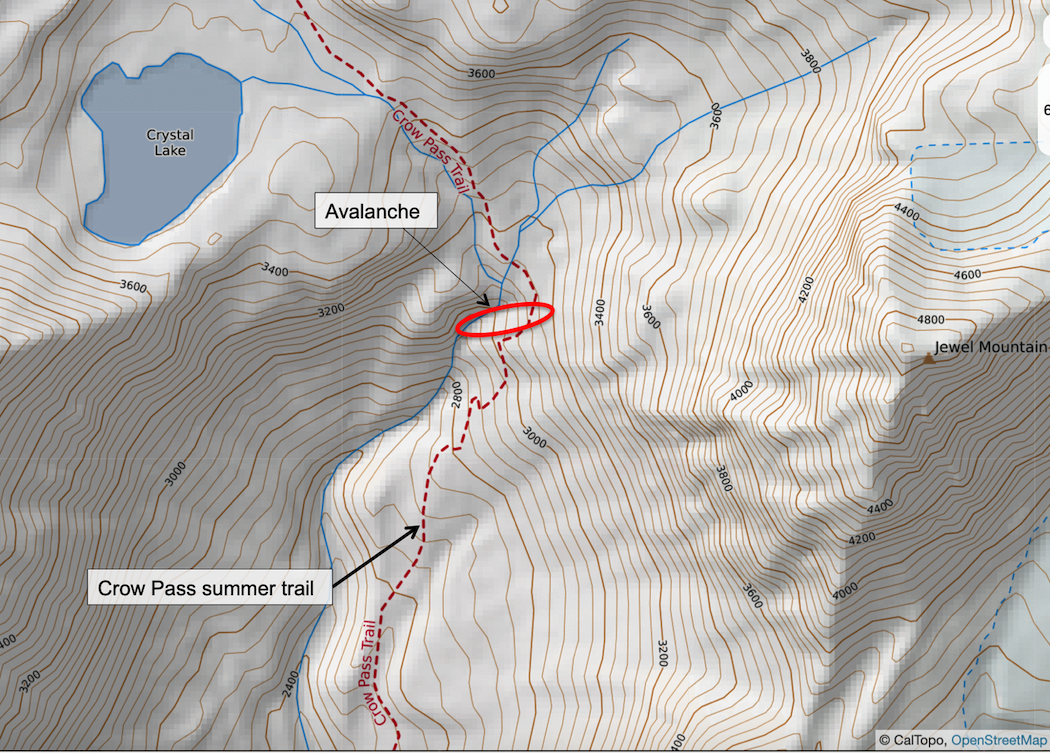 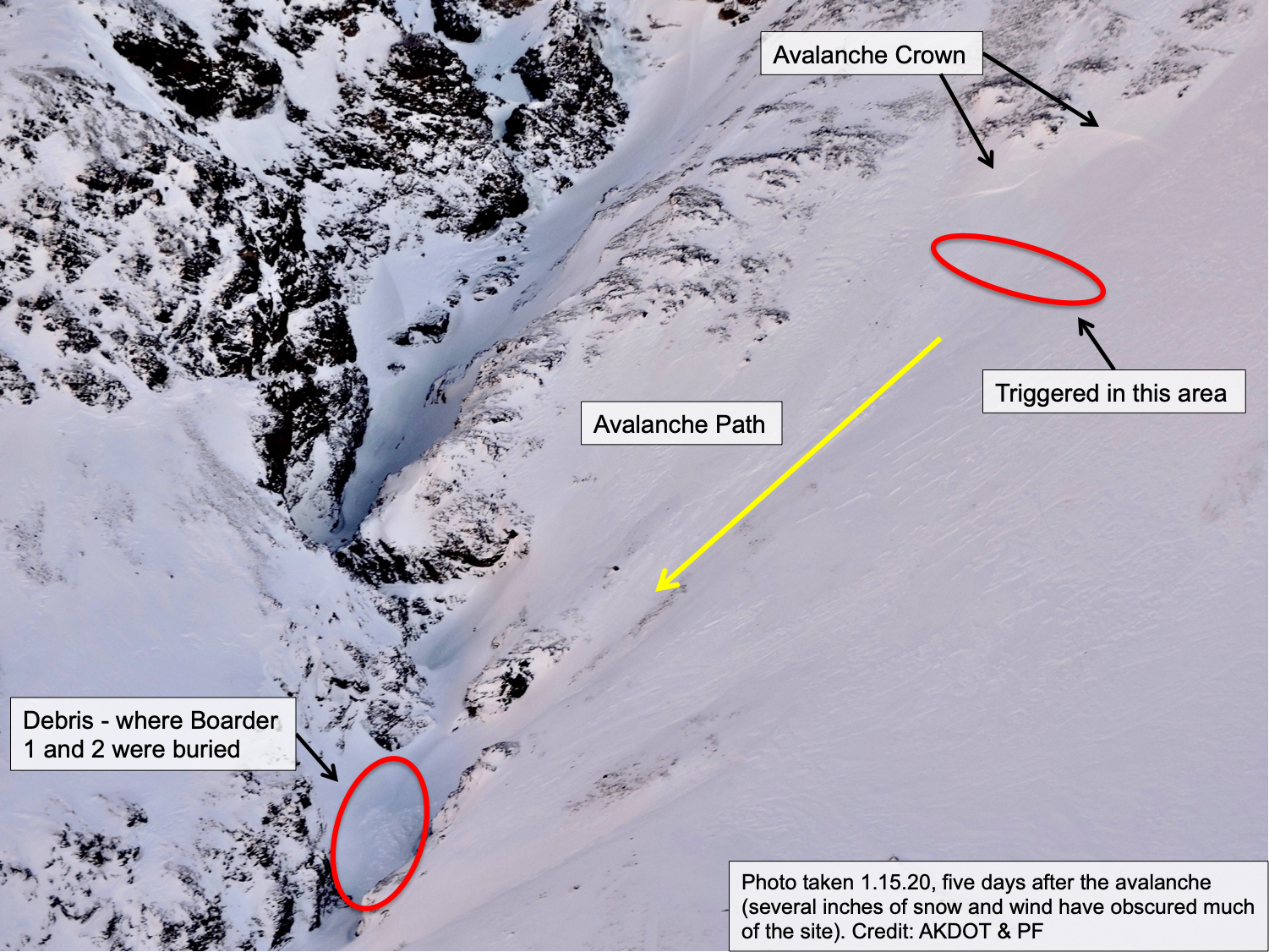 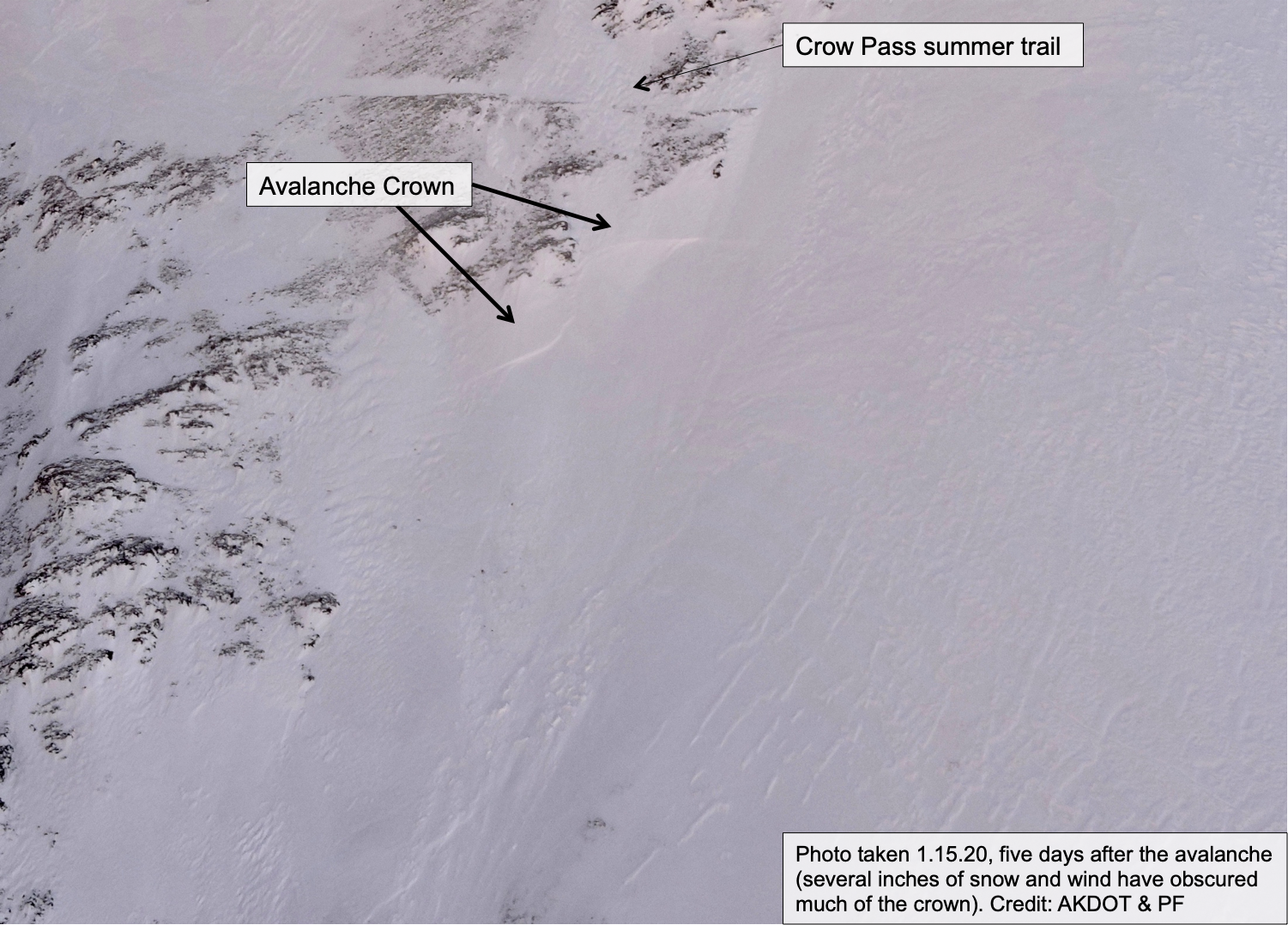 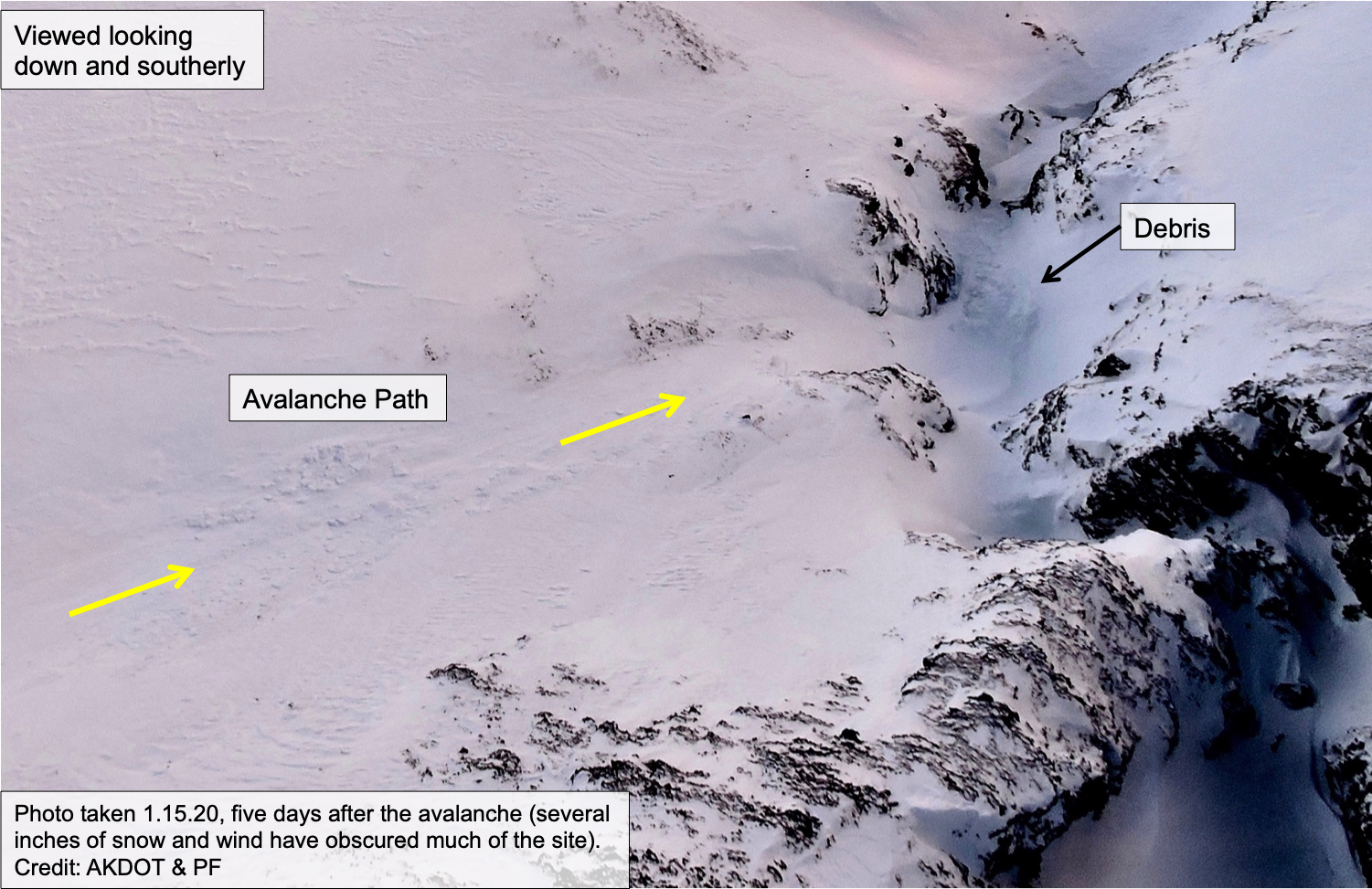 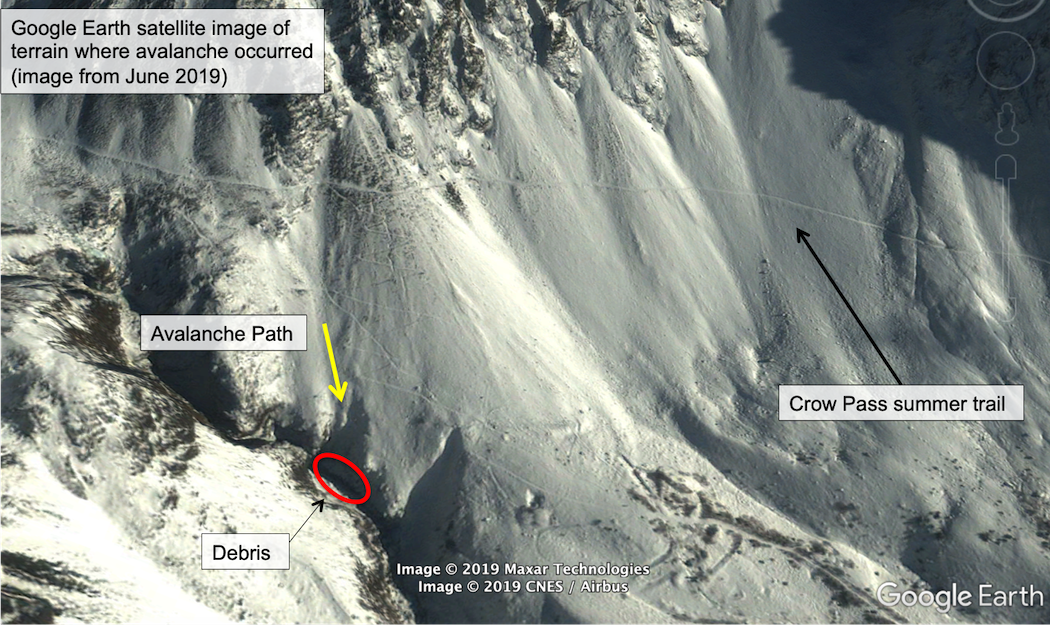