The avalanche danger remains  HIGH above treeline and is  CONSIDERABLE  below treeline. Human triggered large slab avalanches will be likely on steep windloaded slopes. Slabs will be in the 2-3′ thick range and may be found in sheltered zones. These could be triggered remotely from ridgelines or from below. Additionally, cornice falls will be likely. The consequences of triggering a dangerous avalanche or cornice fall is high and travel in avalanche terrain above treeline is NOT recommended.

PORTAGE VALLEY:   Strong winds will continue through Portage Pass and natural avalanches remain possible. Travel in runout zones from avalanches that may occur above is not recommended. This includes venturing along and past the Byron Glacier Trail.

SUMMIT LAKE:   Despite only a few inches of new snow, this area has a very shallow and weak snowpack. Strong winds may have overload buried weak layers and caution is advised if heading to this area.

LOST LAKE:    Caution is advised in the Seward region. Large human triggered avalanches should be expected in this zone as well above treeline.

After a good shock to the system late yesterday, the mountains are slowly recovering. The third wave in this ‘spring break storm cycle’ is heading out this morning and we can expect light snow/rain showers today. Yesterday’s event turned out to be more blow than snow. Ridgetop winds hit an impressive 111mph at the Sunburst weather station and averaged well into the 60’s mph. Although winds have quieted down, they are still forecast to remain strong enough to move snow and load slopes (20-30mph from the east). For snowfall, an additional 10-16″ fell yesterday in the Girdwood and Turnagain areas with only a few new inches in the Summit Lake zone. Here is a quick rundown on storm totals to date.

For anyone headed into the backcountry today, know that the likelihood of triggering a large and unsurviveable avalanche increases with elevation. Dialing back our terrain choices and sticking to slopes 30 degrees or less with nothing steeper above is wise, especially above the trees. The snowpack needs time to adjust to the wallop from last night. The old snow surface that now sits 2-3′ below the new snow is a mixture of facets, surface hoar and crusts. The bonding at these upper elevations should be viewed as poor until proven otherwise.

Slopes that are in the ‘trees’ (below ~2,500′) were showing signs that the new snow was starting to bond yesterday due to warm temperatures. This is good news, but with another foot on top, cautious routefinding and conservative decision-making is required for these areas. Quick hand pits to see how much new snow has fallen and how it is bonding with the old surfaces will be key. Additionally, watch for cracking and collapsing (whumpfing). For the lower elevations, rain has been falling below 1,000′, saturating the thin snow cover and wet sluffs are possible. 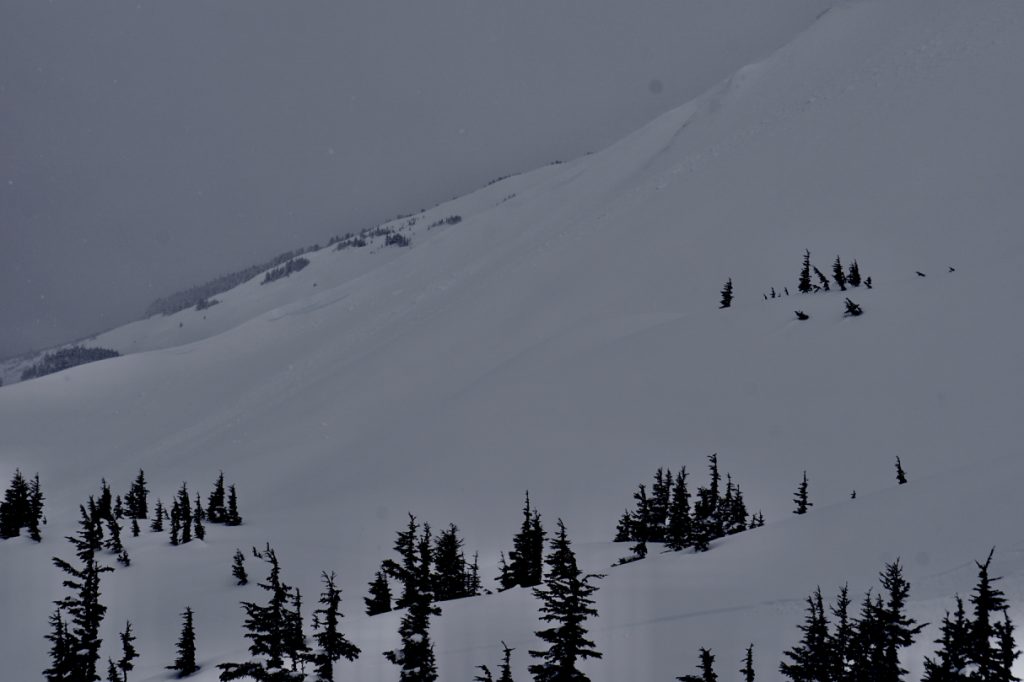 Cornice falls along the lower portion of Tincan’s CFR ridgeline. Strong winds have been loading leeward slopes such as this for almost 2 days now. 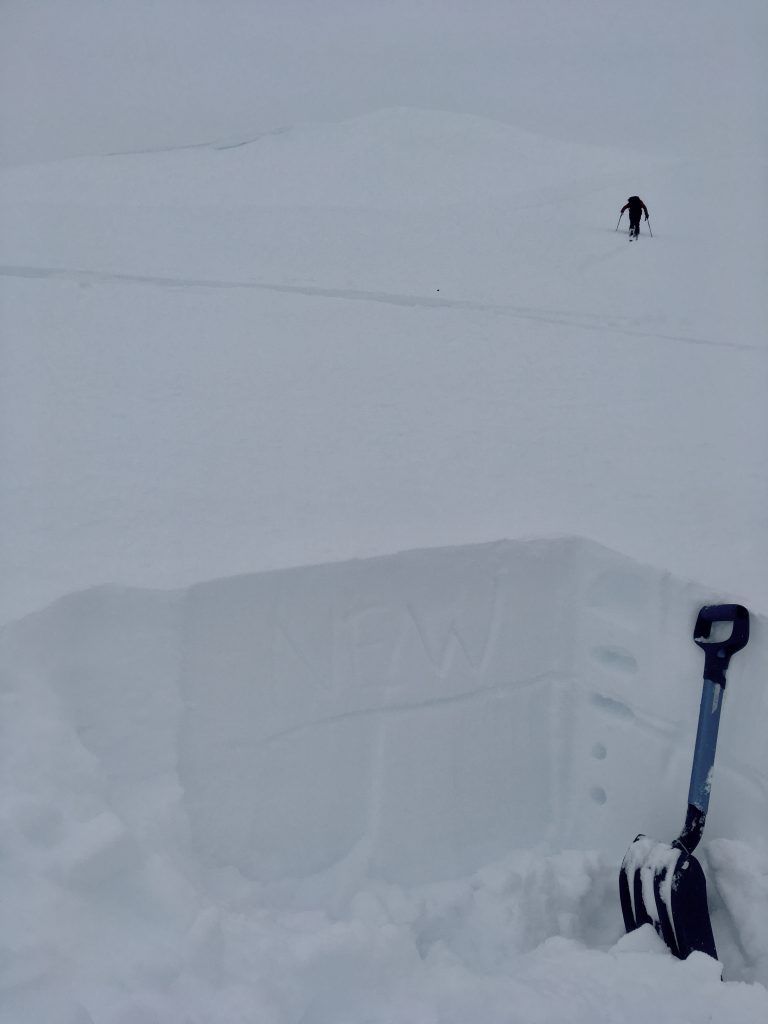 Yesterday we found a foot of new snow from Friday night’s storm, there is now another foot of snow that fell overnight for a total of roughly 2 feet at treeline on Tincan.

Yesterday:    Overcast skies, heavy snowfall and strong easterly winds were over the region. The third wave in a storm series peaked in the evening hours with ridgetop easterly winds sustained in the 60’s mph with gusts to 111mph. Rain/snow line was ~7-800′ before falling to near 100′ in the evening. Snow totals in the past 24 hours are generally 12-16″ at the mid-elevations in Girdwood and Turnagain with lesser amounts south of Turnagain Pass.

Today:    Cloudy skies with light snow showers will be over the area as the main system is moving east. We may see between 2-5″ of snow above 5-800′ with light rain below. Ridgetop winds are slowly decreasing and should average in the 20-30mph range from the east with stronger gusts. Temperatures will remain in the 20’s F along ridgelines and in the mid 30’s at the low elevations

Tomorrrow:   Continued cloudy skies and showery weather will be over the region tomorrow. The snow line will possibly make it back to sea level as cooler air looks to move in. A few inches of new snow are possible along with moderate easterly winds. Skies look to break on Tuesday with a short clearing period before another strong front moves in for Wednesday into Thursday.