The avalanche danger is  MODERATE.  Triggering a large slab avalanche 2-3′ thick remains possible on steep slopes above 2,000′. These slabs can be triggered remotely from ridgelines and be large enough to bury, injure or kill a person.  Identify high consequence terrain and practice safe travel protocols.  Give cornices a wide berth, limit travel under glide cracks and watch your sluff.

LOST LAKE / SEWARD:  Thursday we received a report of a human triggered avalanche where someone was caught, carried and injured on the Harding Icefield trail. This avalanche occurred last Saturday, February 2nd. Seward and Lost Lake received new snow and winds over the past weekend. This area has very little snowpack info and extra caution is advised.

The MLK buried surface hoar roughly 1-3′ deep has been responsible for 13 human triggered avalanches over the past two weeks. The last one was three days ago on Eddies.  On that day snowpack tests were pointing toward a stabilizing weak layer and then the 2′-3′ deep avalanche was triggered remotely from the ridge on a steep, unsupported slope. This avalanche illustrates that snow pit tests are unreliable for the current problem. Furthermore, no signs of instability have been seen in conjunction with several of the large human triggered avalanches on this layer.

This is a tricky situation if wanting to get on slopes over 35 degrees and have a safe day. Several tracks may be on a slope before it avalanches and slabs have been often triggered remotely from ridgelines. There are also many slopes that could in fact be stable, but unfortunately this problem is still a guilty until proven innocent situation.

What to keep in mind today:
1-  This weak layer is widespread in the region and seems to be particularly suspect between 2000′-2500′ due to a melt-freeze crust associated with it.
2-  Use safe travel protocol. Expose only one person at a time (this includes paying attention to other groups in the area), watch partners, stop in safe zones and be rescue ready.
3-  Consider the consequences of an avalanche. Will the debris pile up deeply in a terrain trap or strain a person over cliffs and rocky terrain? Slopes with a fanning runout, spreading the debris, are more favorable for a positive outcome in the event of an avalanche.

4-  As always, one can simply stick to slopes under 35 degrees with nothing steeper above to avoid the issue. Steep, connected, unsupported slopes are the most suspect! 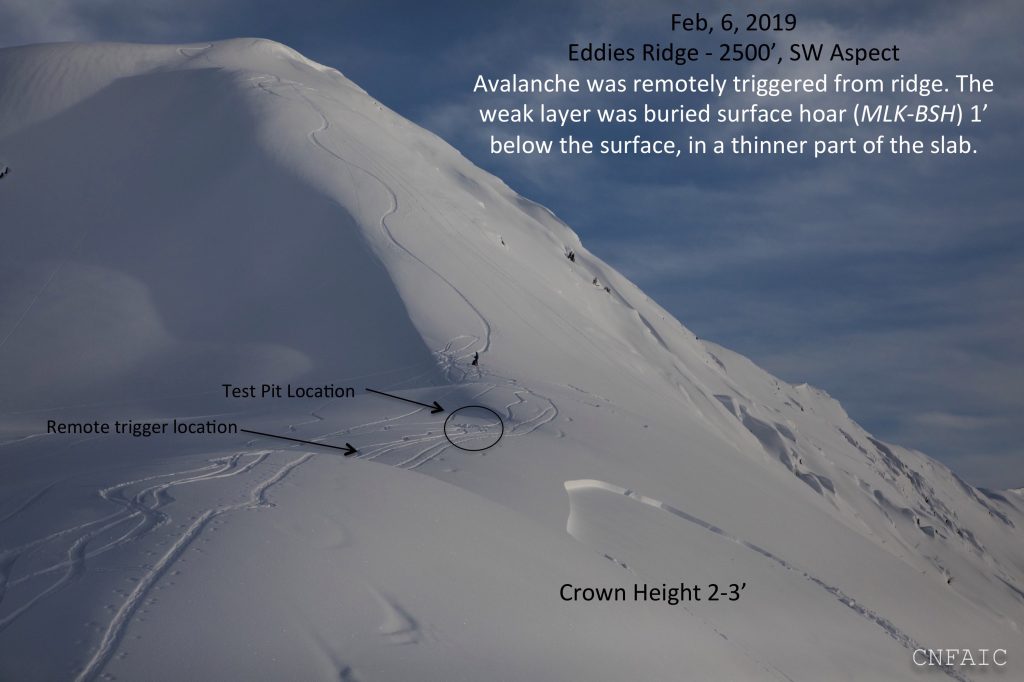 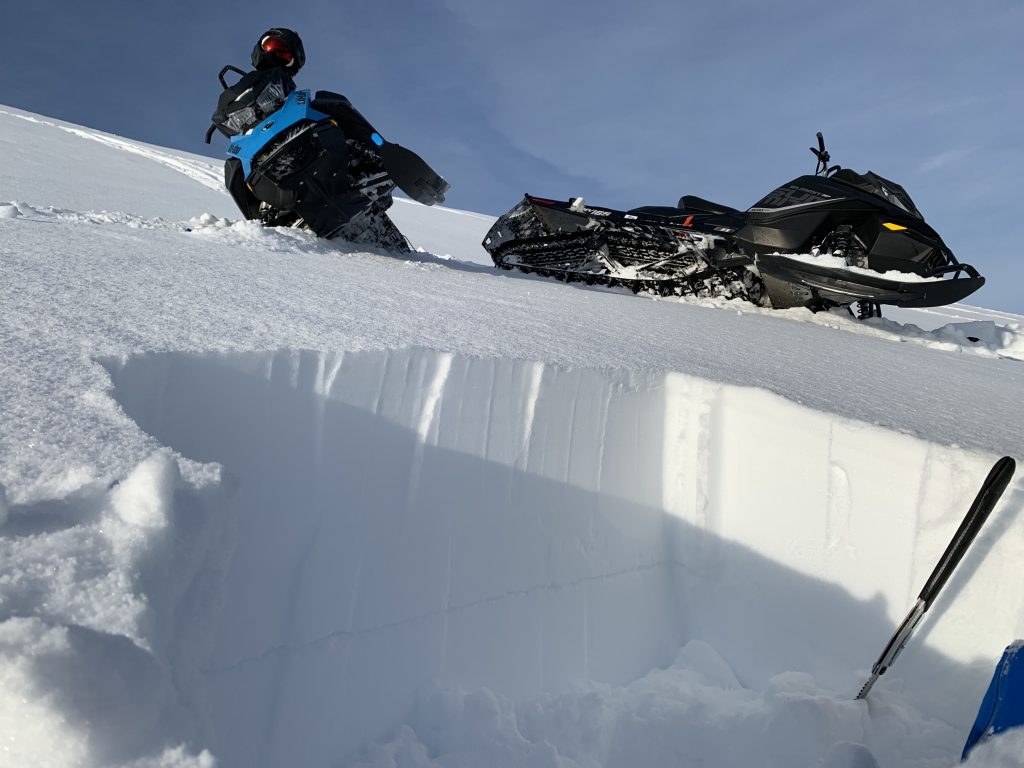 The MLK buried surface hoar layer was easy to spot in a pit on Seattle Ridge, 2-7-19.

CORNICES: Last weekend there was a large cornice fall triggered in upper Seattle Creek drainage. Cornices are looming large in some of the Alpine terrain. Give them an extra wide berth as they often break farther back than expected. 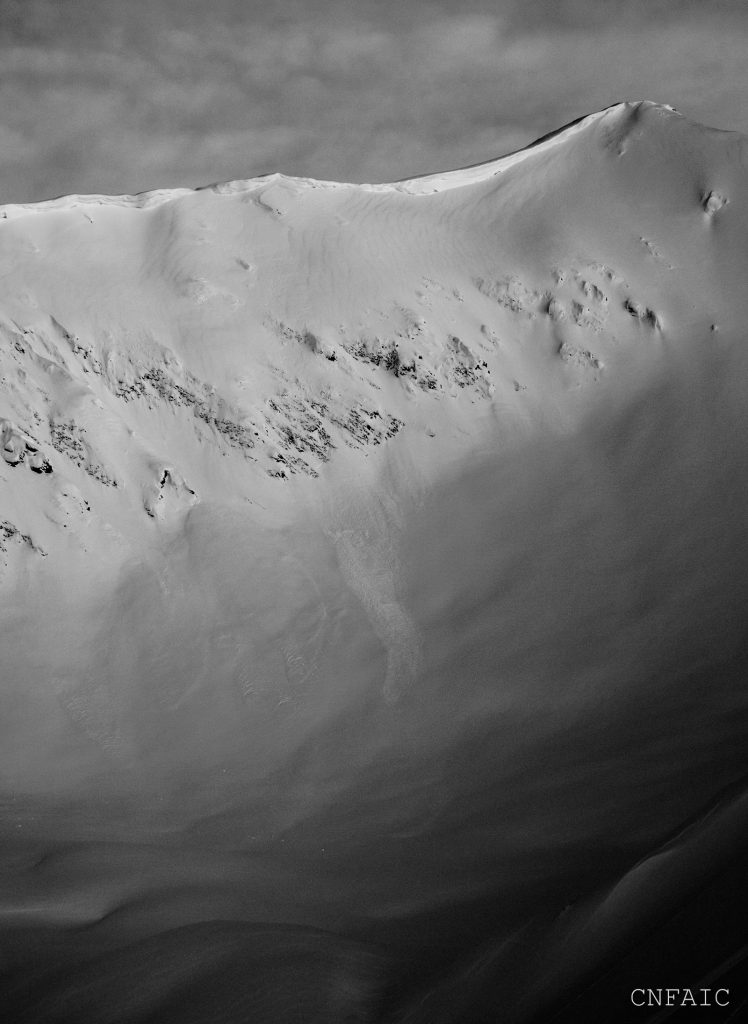 Corniced ridge and loose snow avalanches on Magnum back towards Super Bowl, 2-8-19.

Glide cracks are moving and opening across the region again. The last glide crack to release into an avalanche was roughly a week ago in the Summit zone just north of Manitoba. Look out for glide cracks and limit exposure under them. 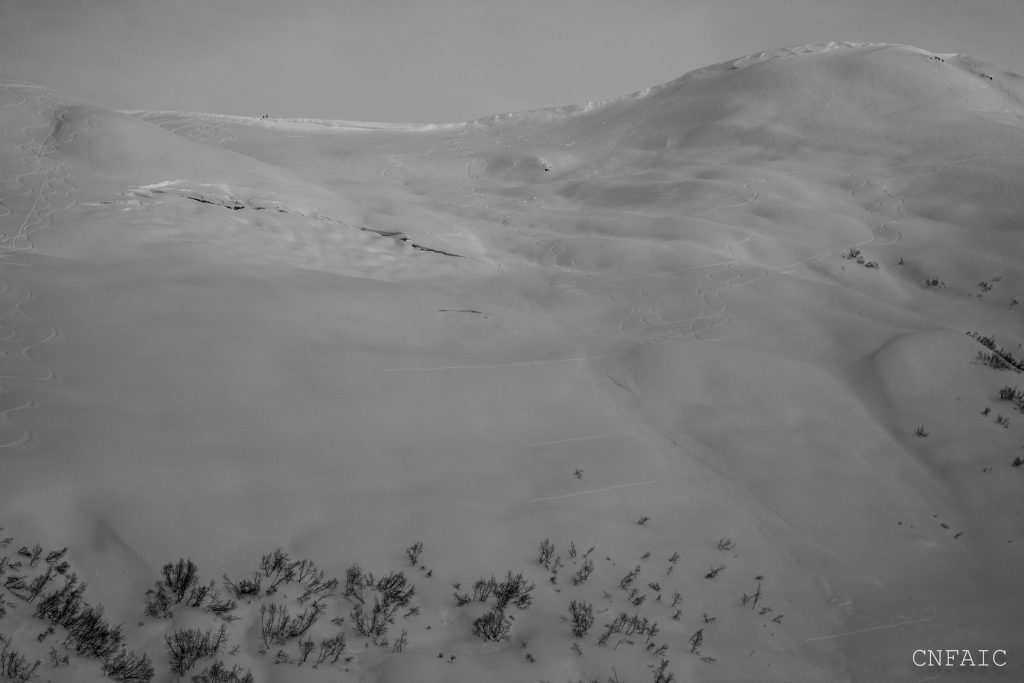 Yesterday:  Skies were partly to mostly cloudy with high overcast clouds. Winds were light and westerly and temperatures were in the 20Fs. No precipitation. Overnight temperatures dropped a little and winds remained light.

Today:  Mostly cloudy skies and light winds. Temperatures will be in the 20Fs to low 30Fs. No precipitation forecast. Overnight easterly winds will bump up with gusts into the 20s.

Tomorrow:  Mostly cloudy skies and snow showers throughout the day as a trough moves in from the west. Temperatures will be in the 20Fs and winds will be easterly 10-20 mph with gusts into the 30s.  Monday looks to have a period of clearing before the next chance of snow Tuesday.

*The Seattle Ridge anemometer (wind sensor) was destroyed. We have a replacement on the way and it should be operational by mid February.