The avalanche danger remains  CONSIDERABLE  on slopes above 2,000′. Human triggered slabs 2-4′ thick are likely on slopes steeper than 35 degrees. These slabs can be remotely triggered from below or along a ridgeline. Triggering a lingering wind slab or large cornice is possible today and has the potential to initiate a larger avalanche below. Cautious route finding and conservative decision-making will be essential for a safe day in the mountains.  MODERATE avalanche danger exists in the treeline zone where triggering a slab 1-2′ thick is possible.

SUMMIT LAKE / JOHNSON PASS:    Poor snowpack structure and multiple weak layers in the snowpack exist in this zone. Triggering a slab 1-3′ deep is likely in the Alpine on recently wind-loaded slopes.

Strong winds and new snow over the last two days has added additional weight to an already stressed out snowpack. A layer of buried surface hoar sits 1-3’ below the surface in Turnagain Pass and 2-5’ deep in Girdwood Valley. This layer has been very reactive this week. Yesterday debris from recent natural avalanches was seen on the SE facing slopes of Seattle Ridge. This past weekend nine remote triggered avalanches occurred in Seattle Creek drainage and many were triggered from the ridge above.

What makes this buried surface hoar different from previous layers this winter? This particular layer is more widespread, larger in size, and has been found intact along ridge lines. This means a human can triggering a slab remotely and more potential exists for a slab to propagate across an entire slope. Strong winds have created variability within the slab which means there are more trigger spots – thinner areas of the slab where the weight of a person or snow machine could collapse the weak layer.

Unfortunately this type of avalanche problem is not going away quickly. Choosing low consequence terrain and keeping slope angles below 30 degrees is a safe way to avoid this problem. Also keep in mind: 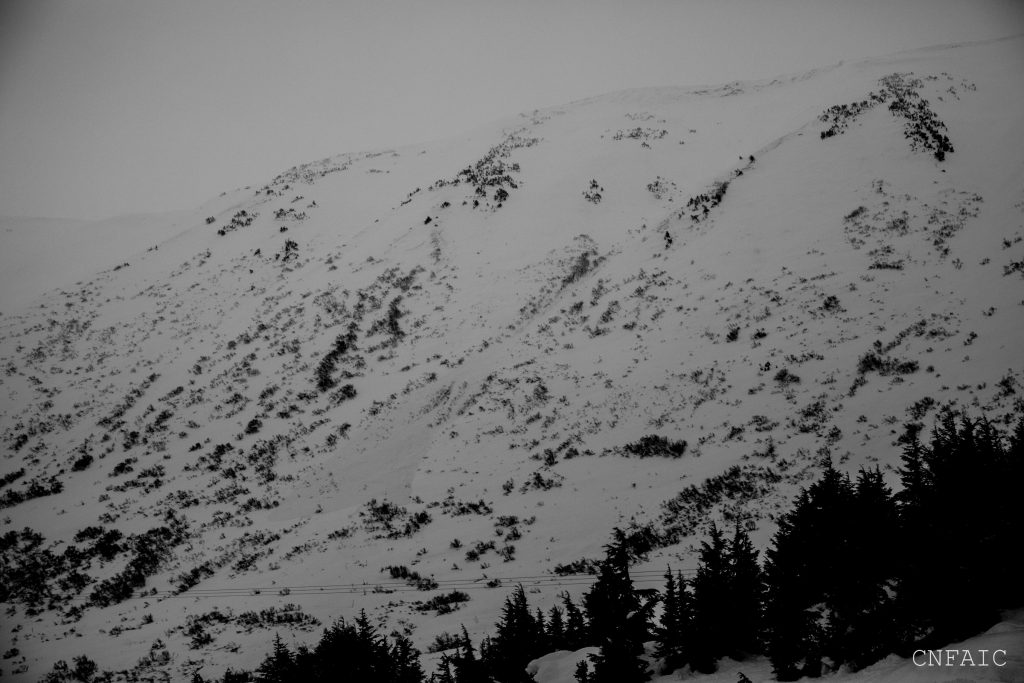 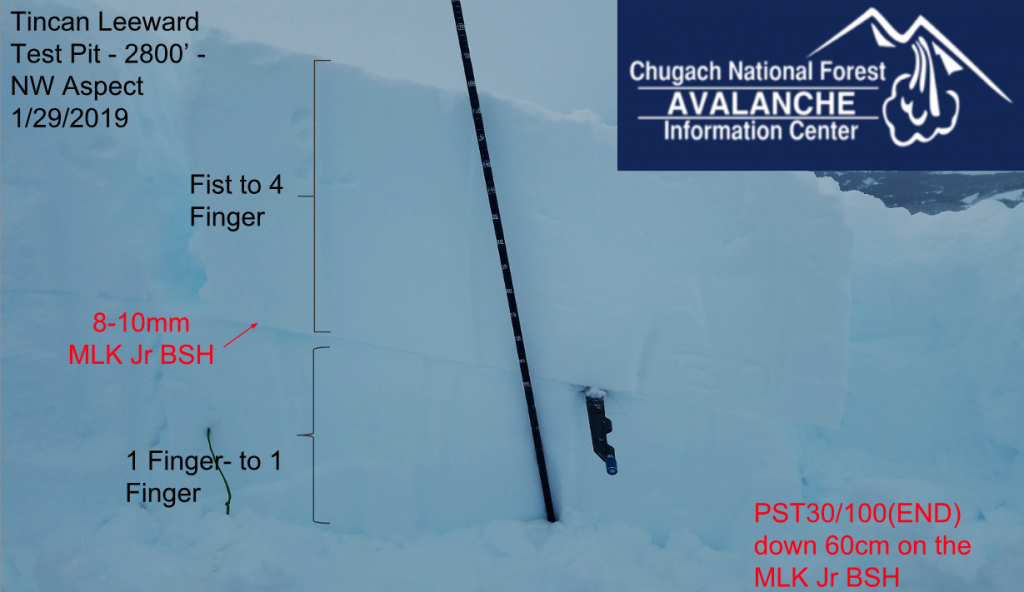 Snowpit on Tincan yesterday (1/29/18) shows the buried surface hoar layer 2′ below the surface. This “MLK BSH”, buried on Martin Luther King Day, is our primary layer of concern across the region.

WIND SLABS: Wind slabs formed yesterday by strong winds and 6-12” of new snow on Monday may still be reactive on slopes steeper than 35 degrees.  More concerning is the possibility of triggering a smaller wind slab that steps down into the weaker snow below, causing a larger more dangerous avalanche.

CORNICES: Large cornices are present along many ridgelines across the region. These ridgtop hazards can be tricky to see and can break further onto a ridge than expected. Triggering a cornice could initiate a large avalanche on the slope below. Watch for other groups and avoid traveling on or underneath these unpredictable hazards.

Yesterday: Skies were overcast with a mix of rain and snow across the region. Rain/snow line was near 1000′. Portage Valley received an 1 € of rain at lower elevations, an estimated 12 € of snow in the upper elevations. Alyeska midway station recorded .33 € SWE (1-2 € wet snow) and Turnagain Pass DOT RWIS station recorded 0.1 € SWE (trace of wet snow along the road.) Ridge top winds were 15-30mph from the East.

Today: Overcast skies and with a chance for 1-2 € of snow. East ridge top winds 15-30mph will decrease to Light and shift to the North by this evening. Above freezing temperatures at sea level will dip into the upper-20Fs tonight. Temperatures at ridgetops should decrease into the mid to low-20F’s.

Tomorrow: Mostly sunny skies are in the forecast tomorrow. Moderate Northwest outflow winds will build in the morning 15-30mph along ridge tops. Temperatures will be in the mid-20F’s. No precipitation is expected.

*Seattle Ridge weather station was heavily rimed and the anemometer (wind sensor) was destroyed.   We are currently working to replace it.