Seattle ridge common up-track into the backside bowls. Very unstable snowpack. Saw 9 human triggered avalanches – no one caught – 4 of these we witnessed in action.

Several remotely triggered slab avalanches along the backside of Seattle ridge. 7 of these were in Main Bowl (1st Bowl), 2 near the weather station and one in south facing Warmup Bowl (-1 Bowl). We witnessed 2 riders making their way along the ridge proper above Main Bowl and triggering 4 of these.

We investigated one of them in Main Bowl, buried surface hoar was the weak layer. It is very likely this was the weak layer in all human triggered avalanches seen today.
Crown heights were 20" to 60" due to wind loading. Average slabs depths were 15"-30".

There was evidence of natural slab avalanche activity in Mamma's Bowl (0 Bowl) and in north facing Warmup Bowl (-1 Bowl).

Recent avalanches were the only sign of instability. No cracking or collapsing was observed.

Partly sunny then overcast in the afternoon. Light easterly winds. Temperatures in the 20'sF.

Soft settled powder begins around 1,500' and gets better by elevation. Crusty surface snow and conditions below 1,500'

There is 15" - 25" of new snow from last week's storm that is sitting on surface hoar formed during the short cold spell early last week (Jan 18-21). We are calling the layer the MLK BSH layer. We found no other weakness below this layer. All avalanche activity seen, both today triggered by people, as well as older slabs from the storm all appeared to be relegated to the storm snow unable to bond to the surface hoar.

Pit #1: Near weather station and close to the Widow Maker slide path. West aspect, 2,300', 20 degree slope. ECTP V 22" down on BSH (meaning failure in the block when cutting it on the buried surface hoar). This is the worse possible result for a stability test and can only confirm the high instability of the snowpack. In this pit, the snow hardness was closer to 1finger above and below the MLK BSH. 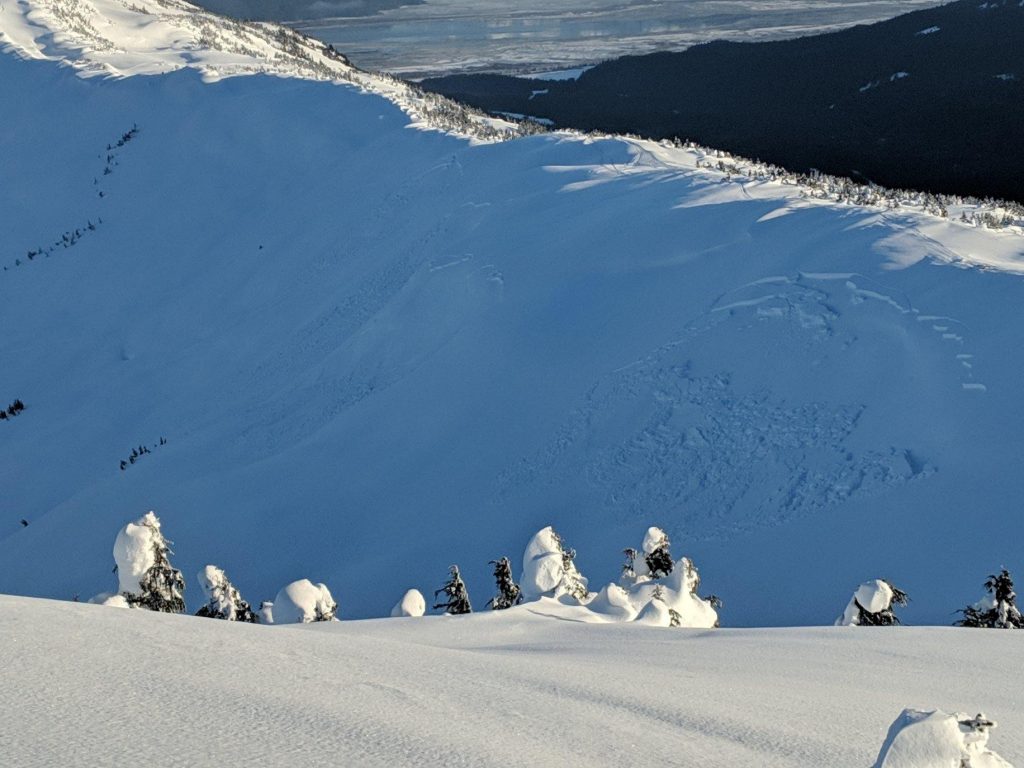 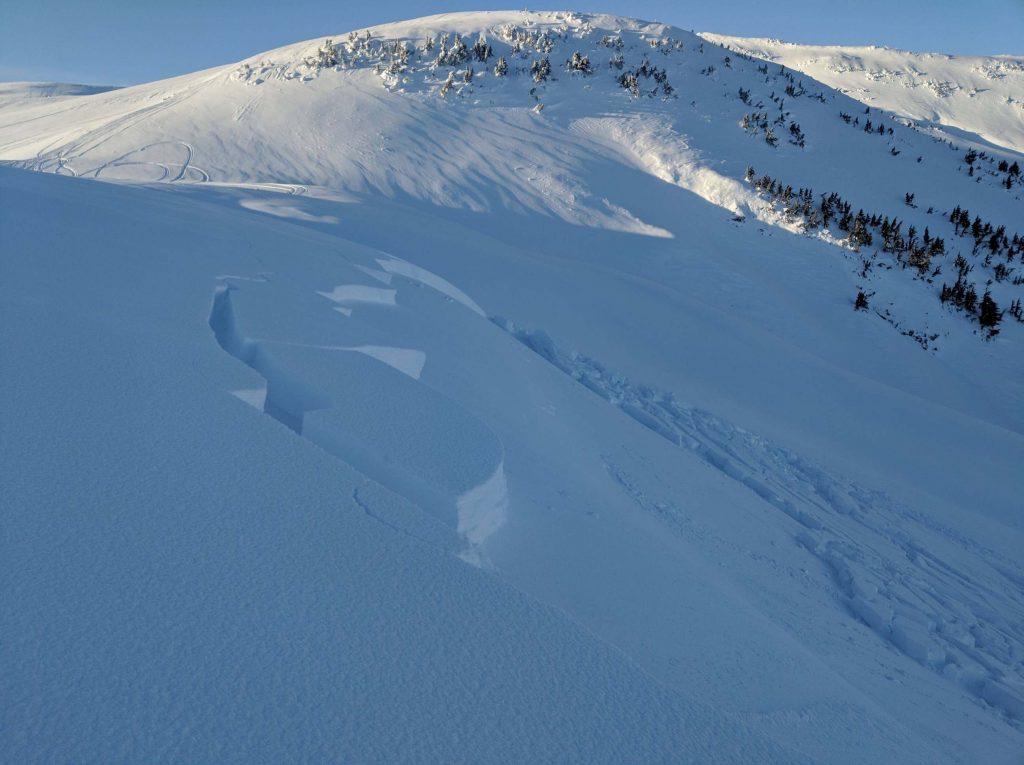 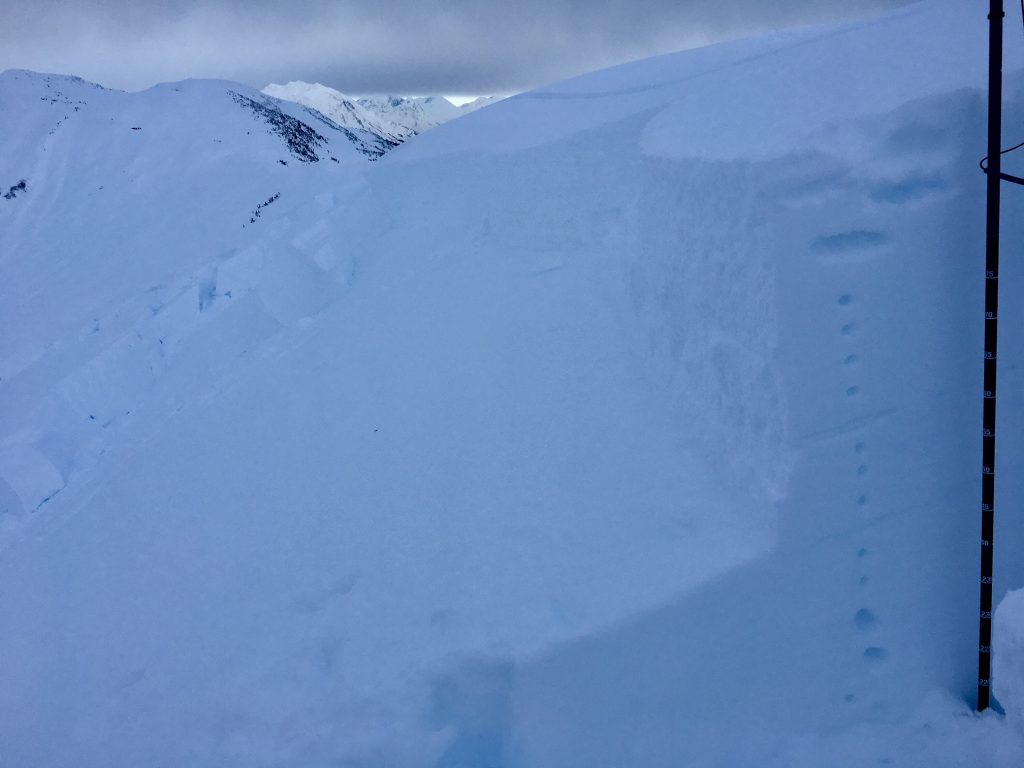 Crown profile in one of the slide in Main Bowl 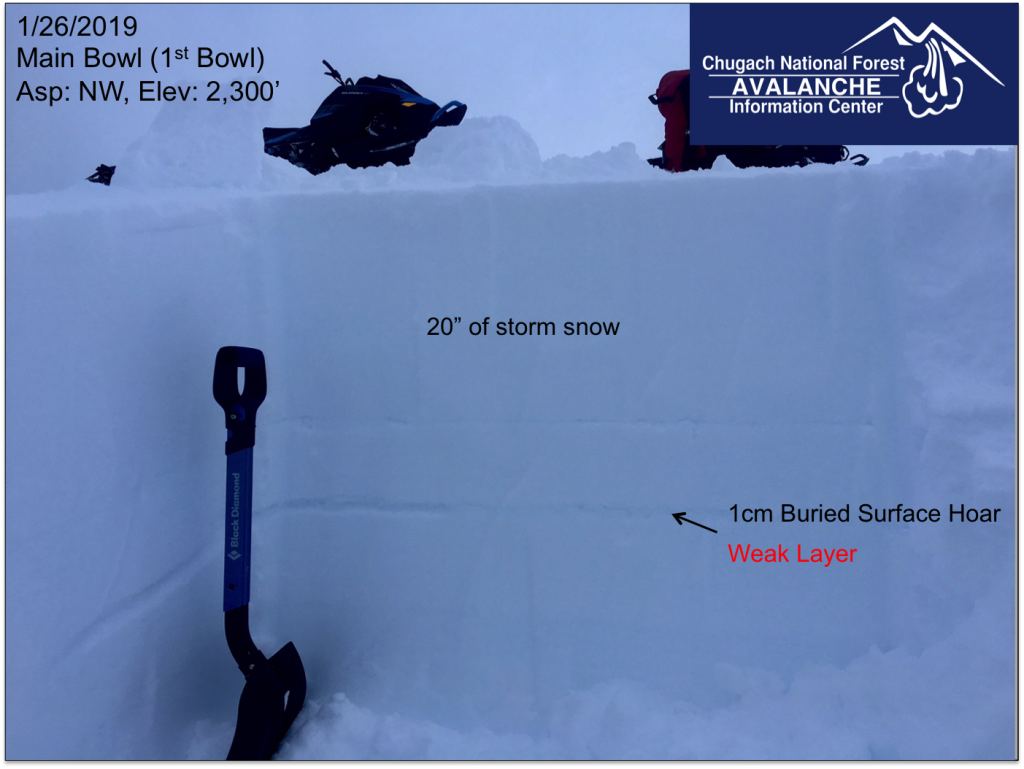 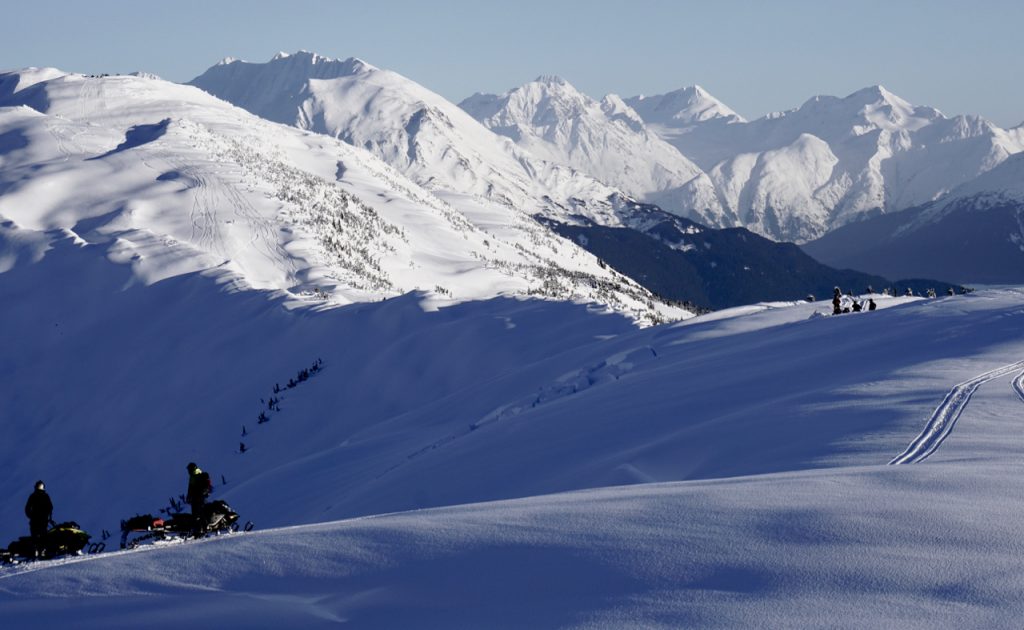 Looking at riders close to a crown. Note how low angle the slab pulled back onto. 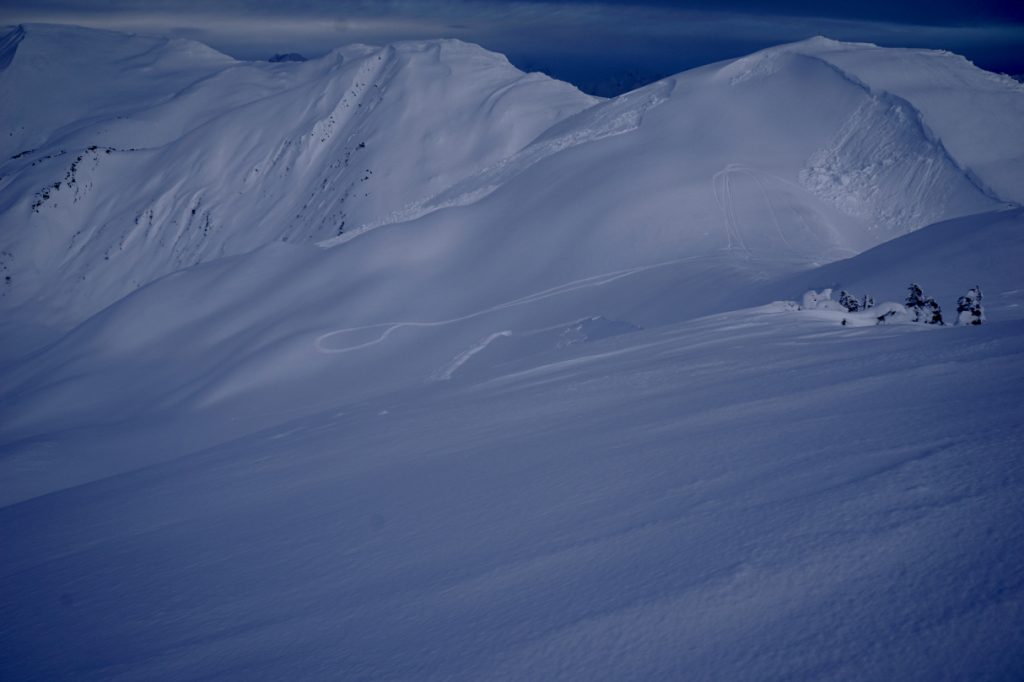 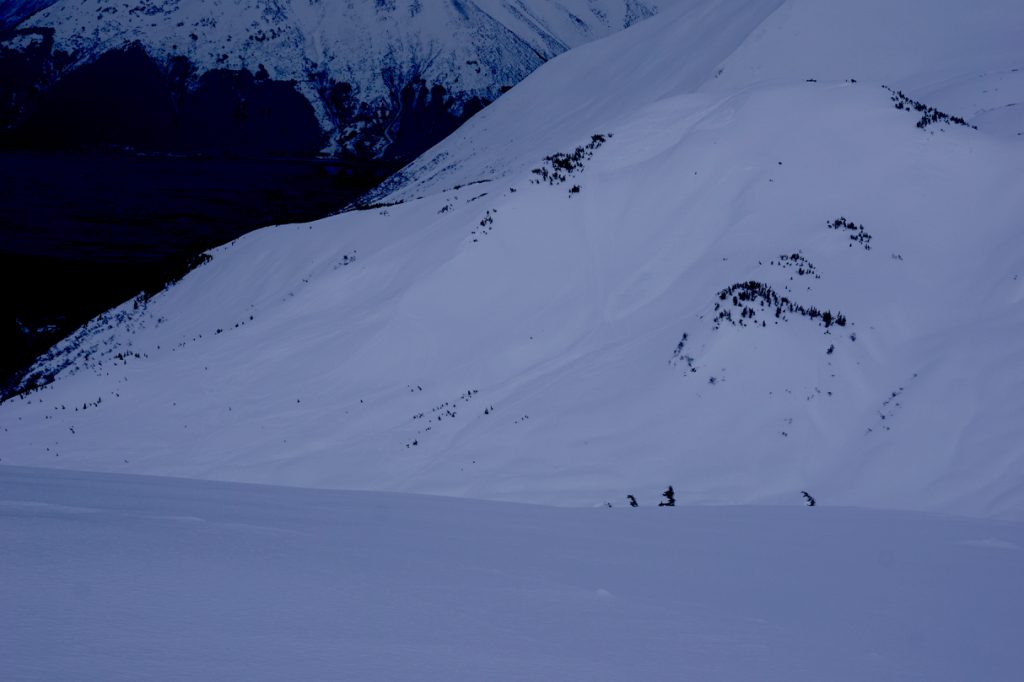 Two more avalanches triggered on the lower and southerly aspect of Main Bowl. 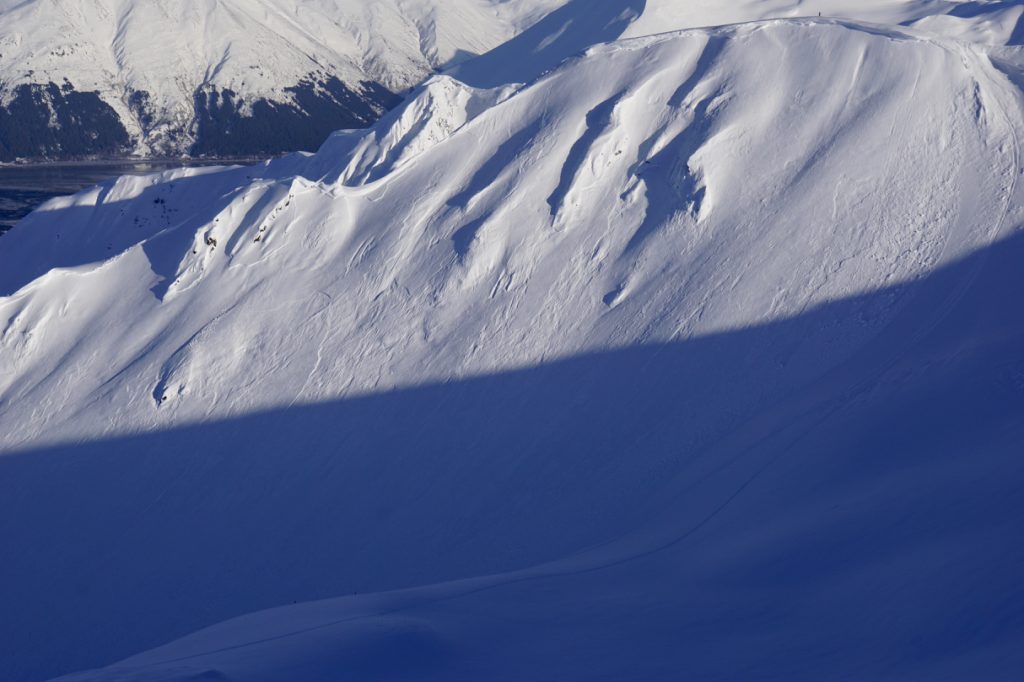 Warmup Bowl avalanche - only a foot thick but this slide went wall to wall. Debris was piled up deeply in the bottom terrain trap. 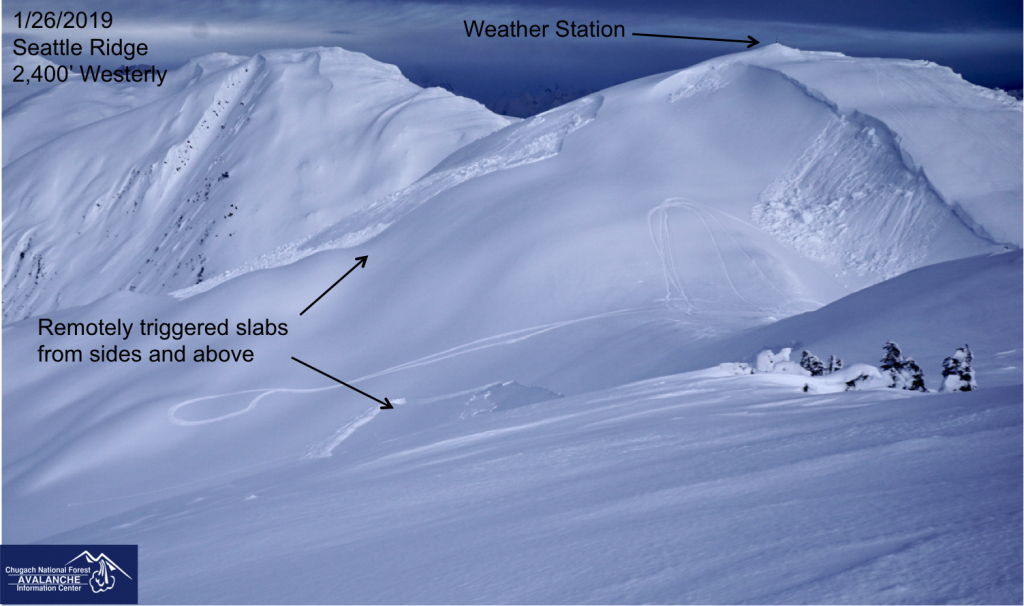 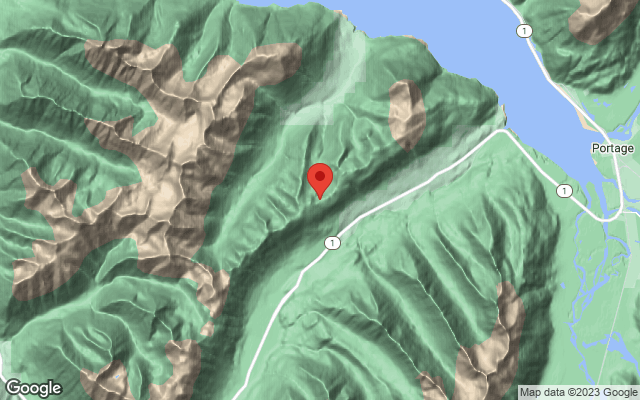