There remains a CONSIDERABLE avalanche danger above treeline throughout Turnagain Pass.   Forecasters and observers continue to find a layer of surface hoar buried last week (MLK day) that was responsible for several human-triggered avalanches on Saturday.   Given the nature of this problem, avalanches have the potential to be triggered from significant distances away from a slope and may be quite wide and connected.

If winds kick up from the East today, fresh wind slabs may add an additional stress onto this known weak layer.    Cautious route finding and conservative decision-making will be essential for a safe day of mountain travel.

It doesn’t take much digging right now to find and easily identify the buried layer of surface hoar (buried on MLK day) responsible for a number of human-triggered avalanches on the motorized side of Turnagain Pass on Saturday.  We found this same layer to be widespread on Sunburst yesterday above 2,000’ (and up to our high point at 3,400’).  It shows up in a snowpit wall or snowmachine trench as a thin grey line 12-24” below the surface on all aspects.  Though no obvious red flags were present during yesterday’s tour, the poor structure and widespread nature of this persistent weak layer has our hackles up.  Thin spots in the slab (near rocks or wind scoured areas) are more likely trigger points and should be avoided. 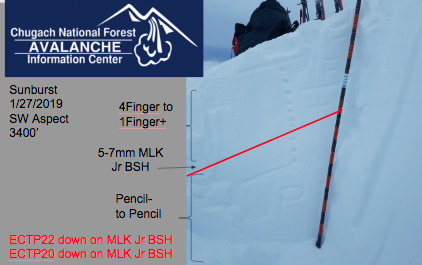 There is no mistaking the MLK buried surface hoar layer in snowpits right now.  As seen on Sunburst yesterday buried 12-16″ below the surface.

Snowpack tests over the last two days have all showed high propagation potential on the MLK layer.  With such a connected weak layer across multiple aspects and elevation bands, any avalanche initiated has the potential to be quite wide.  As seen on Saturday, these avalanches can be triggered remotely from the bottom of a slope or even an adjacent ridge.

Maintain your situational awareness of where you are on slope in relation to avalanche terrain, any objective hazards (terrain traps) and other groups today.  This is the type of avalanche problem that can very quickly affect an adjacent, unsuspecting party.  Cautious route-finding and conservative decision-making is critical when dealing with known persistent weak layers. 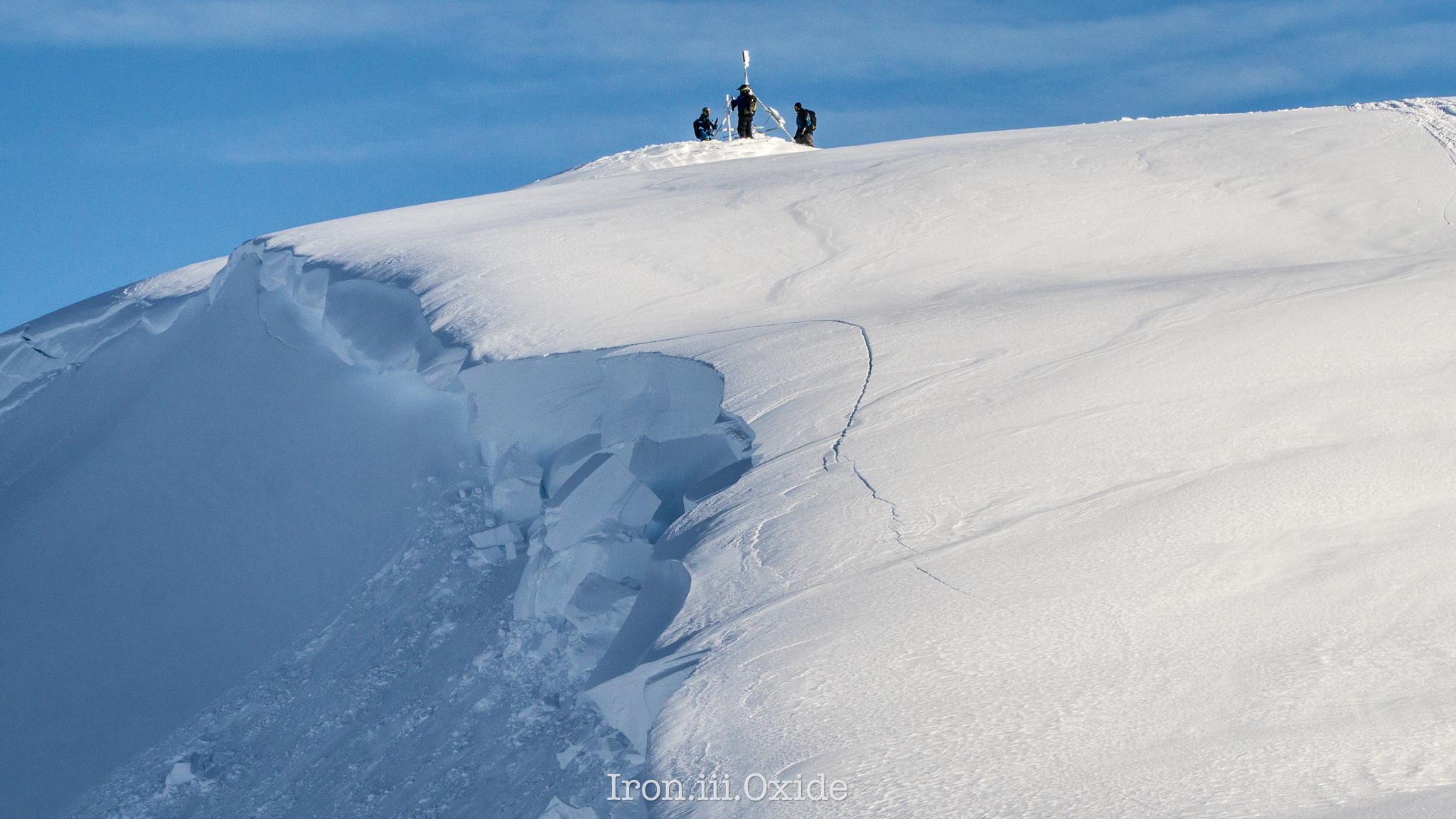 Wind slabs: If forecasted winds kick up in the 20-40mph range from the east today, expect fresh wind slabs to form on lee aspects. This additional weight will push the MLK layer closer to its tipping point.

Cornices: Give these backcountry bombs a wide berth while traversing ridges and limit exposure underneath.  A cornice fall today on a slope greater than 30 degrees may trigger a slab avalanche below.

Yesterday:   Mostly cloudy skies and flat light dominated the eastern Turnagain arm region.   Ridgetop winds were light from the east with the occasional gust into the 30’s with no measurable precipitation.   Temperatures were consistent in the low 20’s at ridgetops (Sunburst at 3880′) and mid to high 30’s at sea level (Portage).

Tomorrow: Tonight and into tomorrow unsettled weather continues.   Precipitation type and rain/ snow line will be the big question.   Generally though, temperatures look to be cooling throughout the work week as the unsettled pattern continues.   Think #snowtosealevel

*Seattle Ridge weather station was heavily rimed and the anemometer (wind sensor) was destroyed.   We are currently working to replace it.