A generally  LOW  avalanche danger exists across all elevations bands for the Turnagain area. Triggering a slab avalanche is unlikely but not impossible. Glide cracks may release into avalanches. Limiting/avoiding exposure under them is prudent. Give cornices a wide berth and watch your sluff.

SUMMIT LAKE / JOHNSON PASS / LYNX DRAINAGE:  *** We want to emphasize the difference here! More caution is advised  South of Turnagain Pass.***  Keep in mind buried weak layers exist in the middle and base of the snowpack. More potential for triggering a large slab avalanche exists in this zone. Choose terrain wisely and please read the Additional Concerns below.

Despite our generally stable conditions, it is still important to look for signs of instability as the mountains can surprise us at times. Good travel habits, such as exposing one person at a time, watching your partners and grouping up in safe zones are, as always, key ways to minimize risk. Ease onto steep slopes and be mindful of people below you and on adjacent slopes.

A week of cold/clear weather and lack of wind over our region has allowed the snowpack to stabilize. The last avalanche was triggered a week ago and ongoing snowpack tests point to stable conditions. Hence, we are in the “normal caution” phase of avalanche concerns. These include: 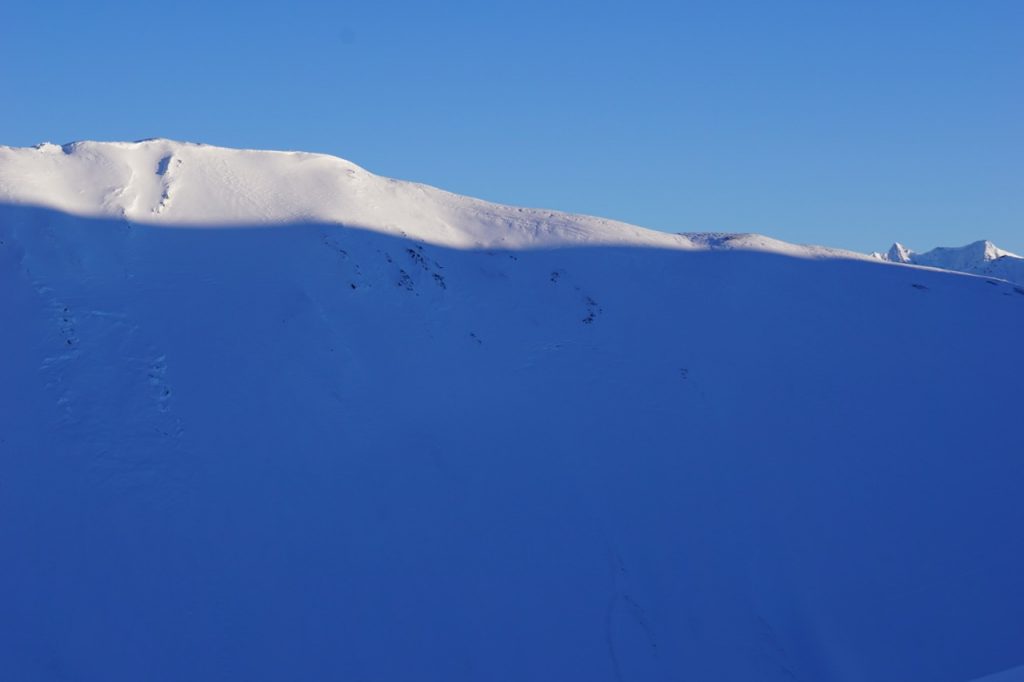 South of Turnagain – Lynx Creek/Johnson Pass/Summit Lake zone:  A poor snowpack structure exists in these areas. The buried surface hoar that we have been talking about over the past week has been found as well as facet/crust combinations in the bottom of the snowpack. The New Year’s storm overloaded a variety of these weak layers as can be seen in photos from the avalanche activity throughout Summit Lake. If you’re headed this way, the snowpack becomes more complex – evaluate terrain exposure and the snowpack as you travel.

Yesterday:   Mostly cloudy  skies, light winds and cold temperatures were over the region. Upper elevation highs were in the low to mid teens, while valley bottom lows were in the single digits.   Ridgetop winds were generally easterly in the 5-10mph with some gusty winds in the mid and lower elevations noted by observers.

Today:    Cold and clear conditions  are expected back today. Very cold air to our north is spilling over the Alaska Range into Southcentral as we speak, increasing ridgetop winds slightly to the 5-15mph range from the NW. Upper elevation temperatures in the teens and single digit temperatures in valley bottoms are  expected to remain today.

Tomorrow:   Clear skies and cold air will continue to seep down from the north bringing potentially the coldest temperatures for this extended high-pressure Thursday into Friday. When will we thaw out? Possibly this weekend. Kyle Van Peursem, the Avalanche Program lead at the National Weather Service, stated in this morning’s discussion “there is high confidence that the pattern change will  bring much warmer and wetter weather to the region through at  least the middle of next week“.