PORTAGE:    Up to 5′ of snow has fallen in the high elevations, avalanches are still likely to run their full length to valley bottoms. Avoid being in avalanche paths.

SUMMIT LAKE:    A  very weak and shallow snowpack exists under the storm snow. Slab avalanches 1+’ deep will be very easy to trigger and may release naturally on steeper slopes.

Yesterday’s quick moving and powerful storm brought feet of snow to the Alpine, inches of rain to sea level and 90mph winds to the ridgetops. The rain snow line bounced between 1,000′ and 1,500′ in most areas. Mostly wet snow and rain fell along Turnagain Pass and as of this morning, there is what looks to be an inch or two of snow surviving along the Pass. Rain and snowfall have decreased overnight but are on tap to pick up slightly again this evening.

Widespread avalanche activity was seen yesterday. Debris piles were observed running into snow free zones below 1,000′ in Girdwood and Portage Valleys as well as Seward. Although natural activity will be expected to decrease today, the mountains are still in shock and large avalanches are still likely in many areas. With additional snowfall tonight, natural avalanche likelihood could increase again. That said, today is another day to avoid avalanche terrain all together. 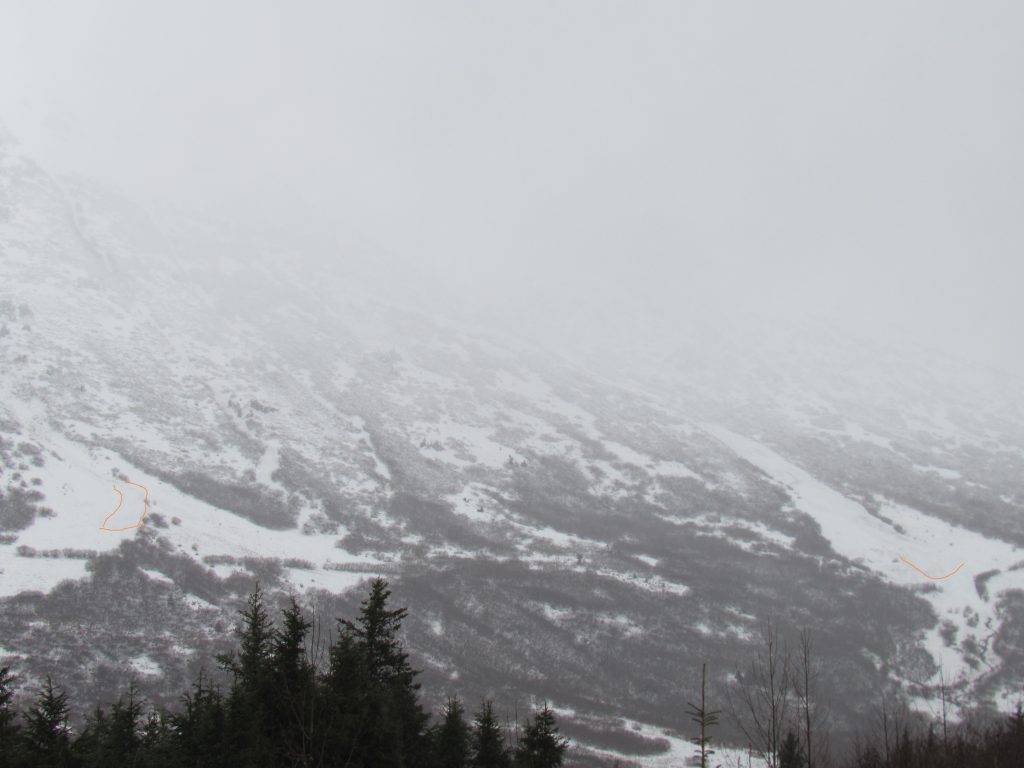 Moose Mountain avalanches, outline of debris marked in orange. This is near MP 52 along the Seward Highway (Summit zone). Photo: Alex McLain 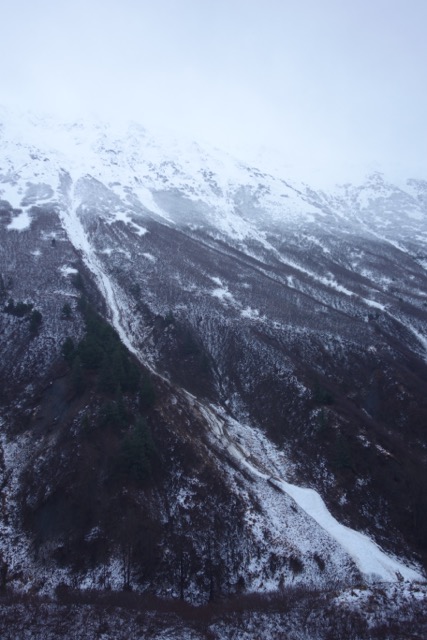 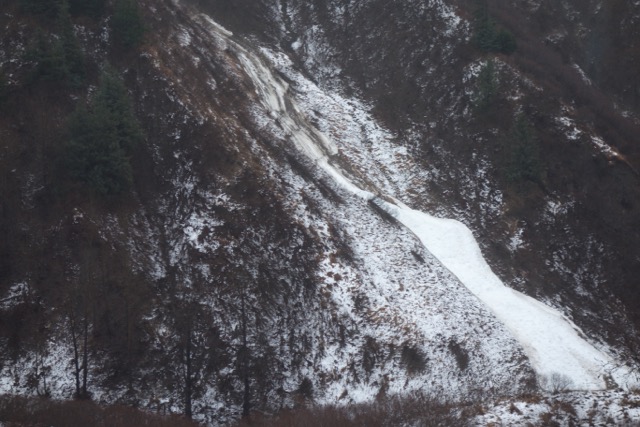 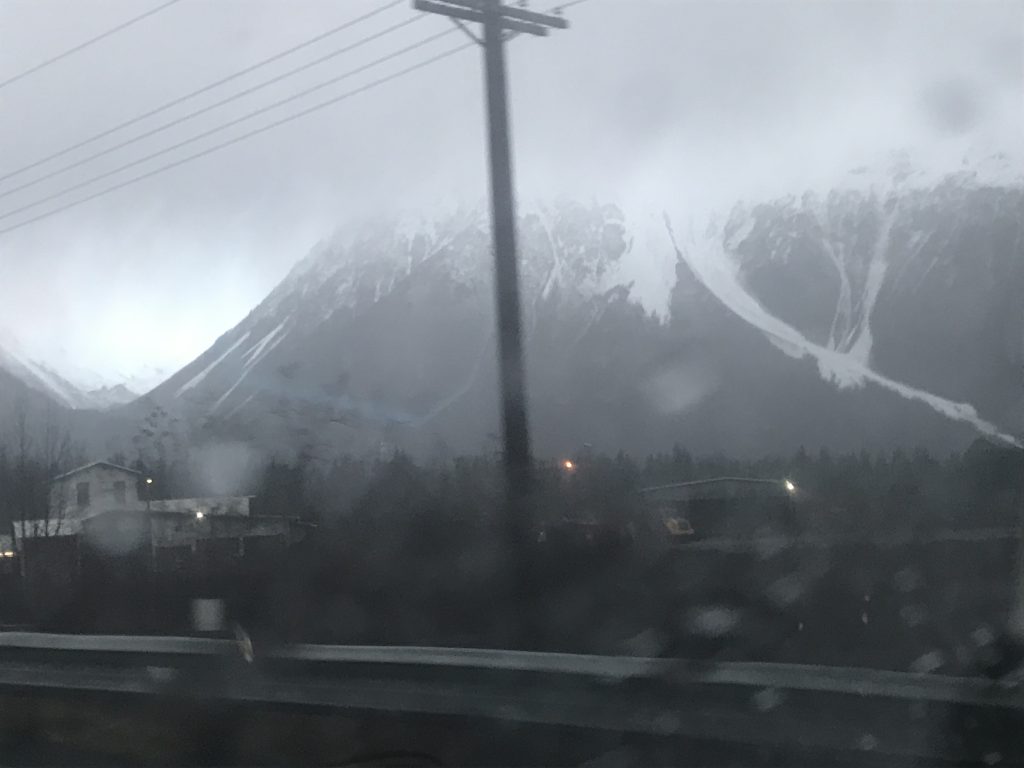 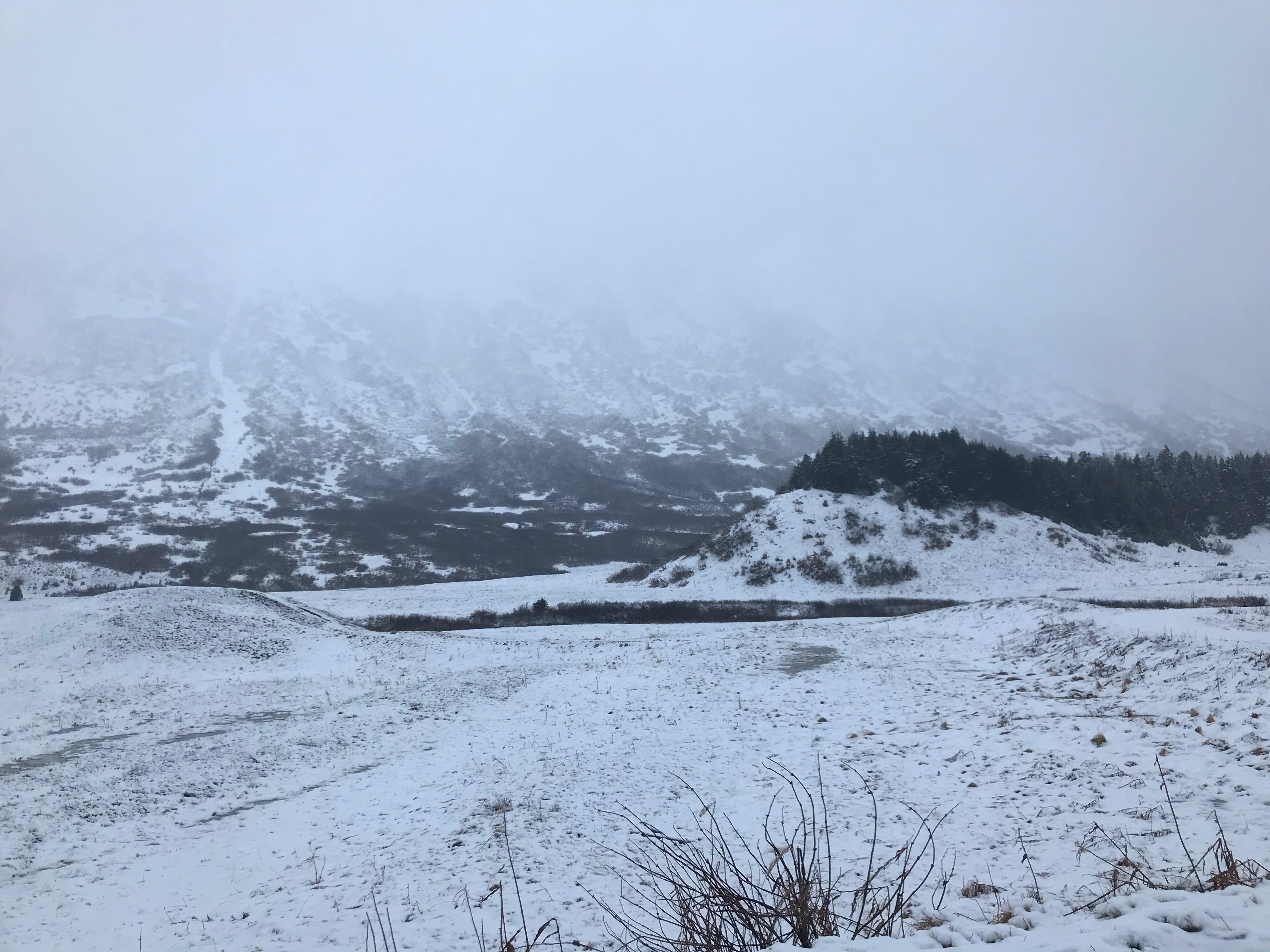 Just enough snow to make it white along Turnagain Pass yesterday. This is Rookie Hill in the foreground looking at the base of Seattle Ridge, seen from the motorized parking lot. Photo: Will Brennen

Yesterday:   Heavy rain below 1,000′ and heavy snowfall above 1,500′ – a wintery mix in between these elevations. Snow and water totals above and below. Winds were strong out of the East, averaging in the 60’s mph with gusts into the 90’s. Temperatures were in the upper 20’s along the ridgetops and mid 30’s at 1,000′.

Today:   Rain and snowfall has decreased overnight. Scattered showers should be seen around the region today and could pick up slightly tonight. Between .2-.3″ of rain below 1,000′ is forecast with 2-4″ of additional snow at the higher elevations today. Tonight snow line should lower and an additional 3-5″ of snow could be seen near sea level by tomorrow morning.   Ridgetop winds will continue from the east in the 25-30 mph range. Temperatures will be in the low 30’s at 1,000′ and mid 20’s along ridgelines through the day.

Tomorrow:    Snowfall making its way to sea level will hopefully greet us in the morning as snow lines are forecast to lower. Snowfall should taper off by tomorrow morning bringing a break in storms before yet another wave of snow (and possibly rain at sea level) ushers in later on Sunday. Stay tuned!