The avalanche danger is currently MODERATE and expected to rise to CONSIDERABLE  late tonight and tomorrow in conjunction with snowfall and strong wind. For the daylight hours today, wind slabs up to a foot thick along with lingering larger slabs up to 2′ thick will be possible to trigger on slopes with wind deposited snow. Watch for changing conditions and in the event snowfall begins earlier than expected, avalanche danger will begin to rise.

One more breezy overcast day is on tap before snowfall begins to fall in earnest tonight. We could see light snowfall add a couple inches through the day, but the bulk of the expected storm snow (6-12″) should fall late tonight through Monday morning. Keep in mind, avalanche danger will rise along with snowfall. The new snow will fall on a weak surface and storm snow avalanches should be expected if this storm verifies.

Prior to tonight’s snow, our main concern for triggering an avalanche remains with slopes that have seen, or are seeing, wind loading. Ridgetop winds have been moderate to strong over the past 48 hours from a generally East direction. These have scoured some ridges and loaded leeward slopes with the existing loose snow available for transport. Small pockets of wind slabs could be triggered on these leeward slopes and these should be relatively easy to identify (smooth pillowed surfaces and stiffer snow over softer snow). More concerning however, is the possibility of finding a wind slab that is sitting on buried surface hoar 1-2′ deep. There are multiple layers of buried surface hoar  that sit in the top 2′ of the snowpack, which may now be overloaded by wind deposited snow. These types of slabs could be larger than expected and break deeper than your ‘typical’ wind slab. If you head out today, watch for how the winds are transporting the snow and avoid wind loaded slopes. Additionally, slabs may range from soft or hard and have the potential to break above you once committed to a steep slope. 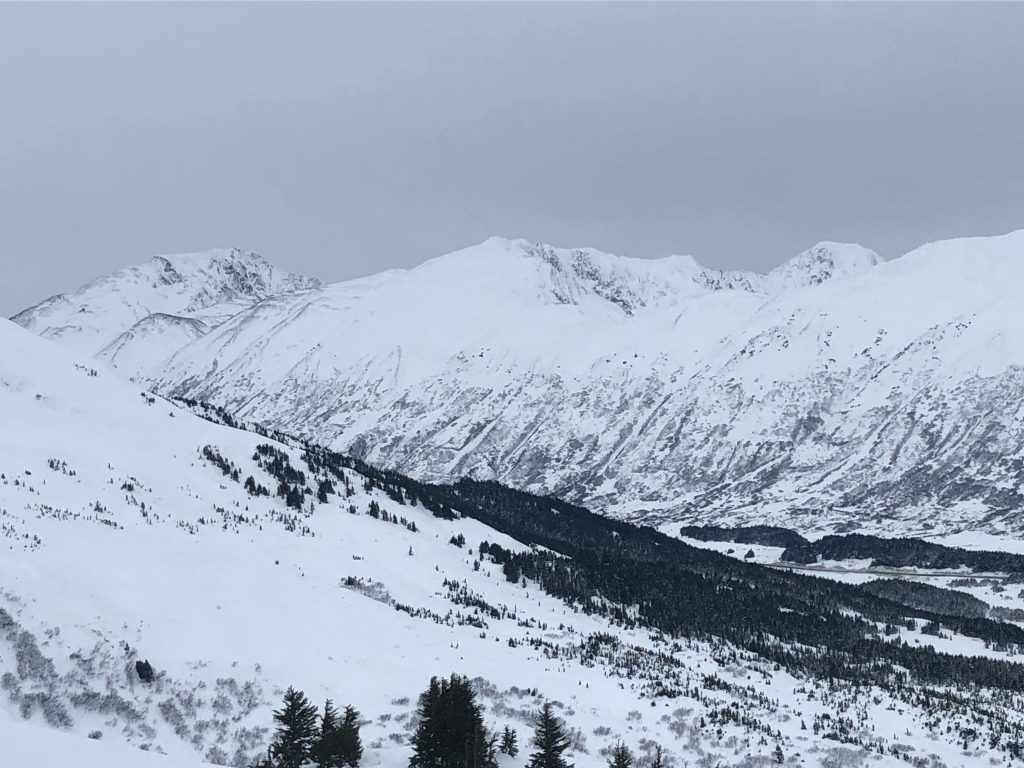 Wind transport just above the trees on Eddies (video: Allen Dahl). Winds are not only loading certain slopes and scouring others, but creating wind crusts as well.

Our snowpack structure is generally poor and weak snow can still be found in the bottom portion of the snowpack at the higher elevations, above 3,000′. Shallow snowpack zones, such as on the South end of Turnagain Pass, Summit Lake and portions of the Girdwood Valley are more pronounced. Although triggering an avalanche breaking deeper in the pack is unlikely, a chance does remain, as a party found the right trigger spot last weekend in the Twin Peaks area. It is worth keeping this poor structure in mind and considering a conservative approach to avoid large steep terrain with shallow snow cover or exposed rock.

Overcast skies filled the region yesterday with windy conditions near and above the trees. Ridgetop winds averaged 15-25mph with gusts to 40mph from a generally East direction. Temperatures were on the warm side, low 20’sF in the Alpine and 30F at 1,000′. A few flurries fell overnight with around an inch of snow recorded at mid-elevations in Girdwood Valley and Turnagain Pass.

Today, a quick moving warm(ish) storm is moving into the area. Snowfall is expected to be light through the daylight hours, with around 1-3″ accumulation, then intensify this evening through Monday morning, adding another 6-12″. Ridgetop winds are forecast to shift Southeasterly and remain in the 10-20mph range until tonight when they bump up into the 25-35mph range with the heavier snowfall. Temperatures are expected to rise to the mid 20’sF along ridgetops and the mid 30’sF at sea level, this will bring a rain/snow mix to sea level and possibly raise the snow line to ~500′-1,000′.

Monday, light snowfall is expected as the system moves out with a possible 1-3″ accumulation. Ridgetop winds look to remain moderate to strong with a shift to Westerly bringing cooler temperatures. Storm total by Monday evening is looking to be around 6-12″ of medium density snow at the mid to upper-elevations.

NWS graphic for the Monday storm: 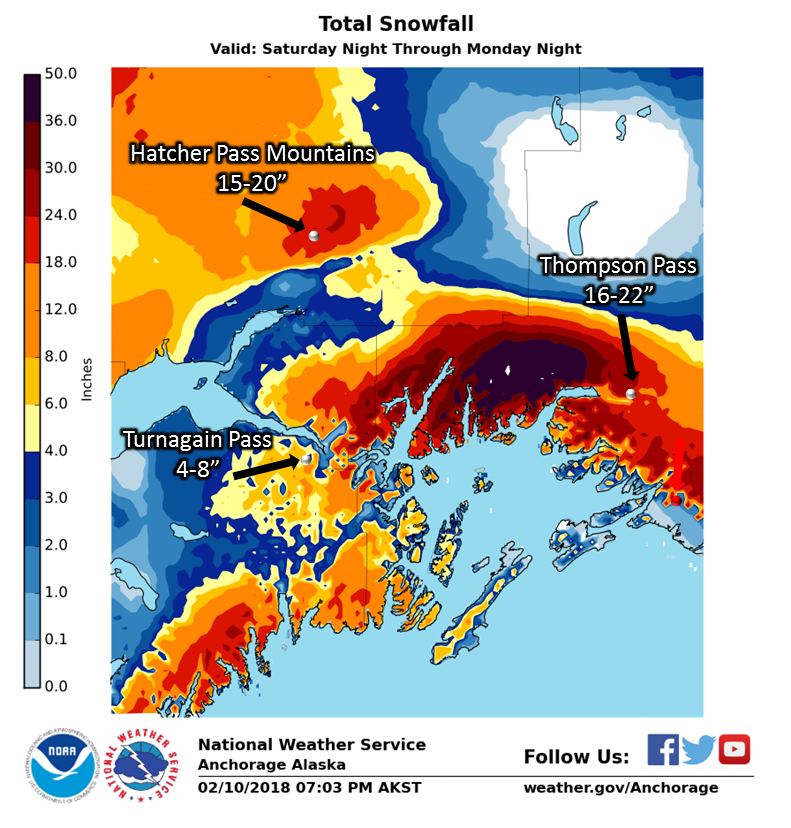