The avalanche danger is  CONSIDERABLE in the alpine and at treeline. New snow, warm temperatures and sustained winds have loaded a weak snowpack.  Triggering a slab 1 – 2+ feet thick is likely on slopes steeper than 35 degrees. Natural avalanches and remote triggered avalanches are possible. Cautious route-finding, conservative decision-making are essential today.

Below 1000′ the avalanche danger is MODERATE where wet snow has cooled to form a breakable surface crust, but an avalanche from above is still possible.

Snowmachine Specific €“ Avalanche Safety and Lessons Learned at AMDS,  December 5th  @ 6:30 pm – 8:00 pm | FREE  Join CNFAIC forecasters at Alaska Mining and Diving Supply for a  talk about lessons learned from past avalanche events and get your brain in gear for avalanche season.

The  CNFAIC Events Calendar  is filling up with avalanche education opportunities. Check it out and find a class that is right for you!

New snow, warm temperatures and strong Easterly winds have created dangerous avalanche conditions across our region. Over the last three days 13” of snow was recorded at Turnagain Pass Snotel (1800’), 16” at Alyeska  Mid-way station, and 22” at Alyeska’s top station. This new snow has fallen on a variety of surfaces, including very weak faceted snow. Yesterday numerous natural avalanches were observed in Girdwood Valley and several were seen in Turnagain Pass, including a slab on the Western face of Sunburst in an area commonly traveled. There was also a remotely triggered avalanche in the same area. Widespread cracking and whumpfing occurred frequently and stability tests failed easily between the new snow and the underlying facets. This weak snow rests either on the ground or overlying a melt-freeze crust near the ground. Today as snow settles, slabs will become more cohesive and could propagate larger than yesterday. Triggering a slab on steep terrain will be likely, especially in leeward, wind loaded areas. This snowpack set-up has the potential to be very touchy. Collapses (whumpfs) may propagate failure over large pieces of terrain and remotely triggering an avalanche is possible. Be aware of runout distances and terrain traps. Overall it is still fairly shallow and rocky, and getting caught in an avalanche could take you for a very unpleasant ride.

A natural avalanche that likely occured early yesterday morning on the West facing slope of Sunburst in an area commonly traveled. 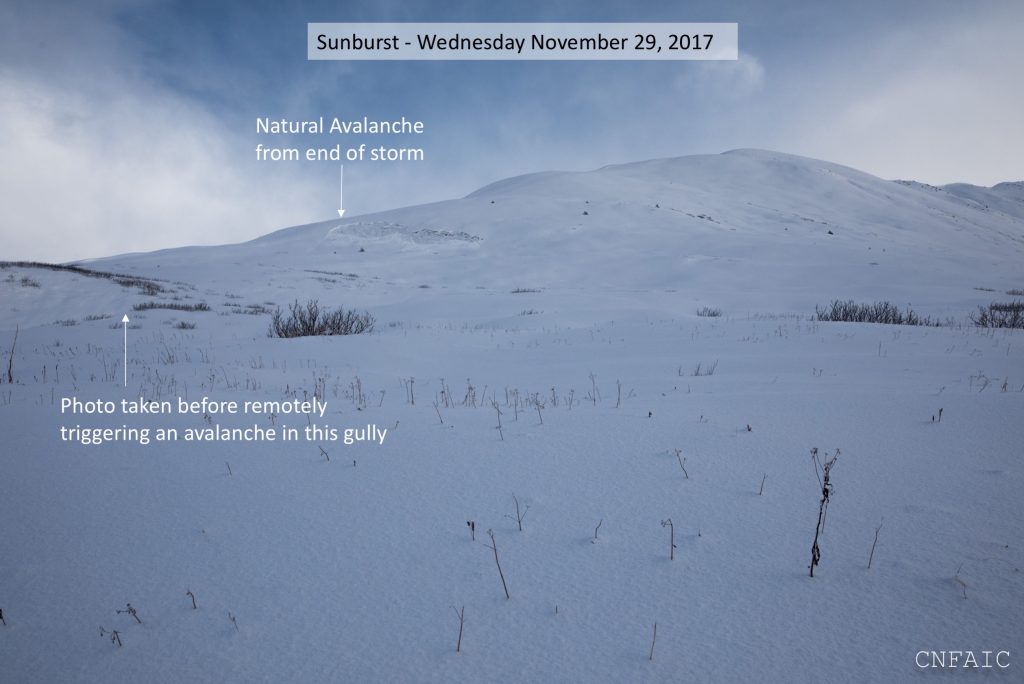 This avalanche was remotely triggered from at least 300-400′ away, but was not witnessed. Note the person in the backgound for scale. 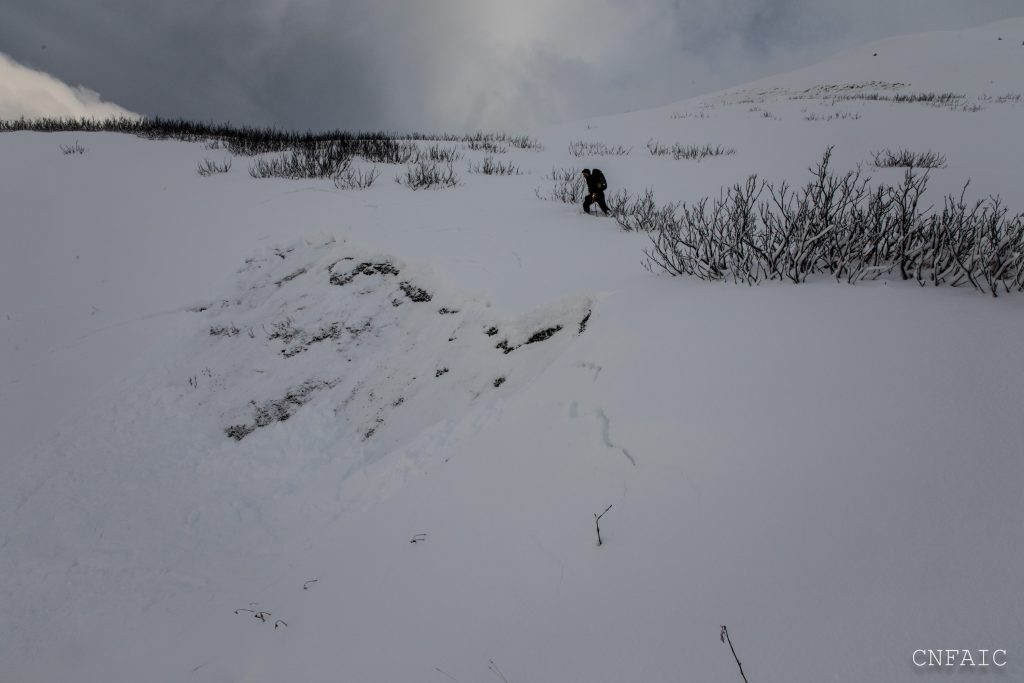 Snow pit profile at 2500′, West aspect of Sunburst, just below the natural avalanche in the first photo posted above. 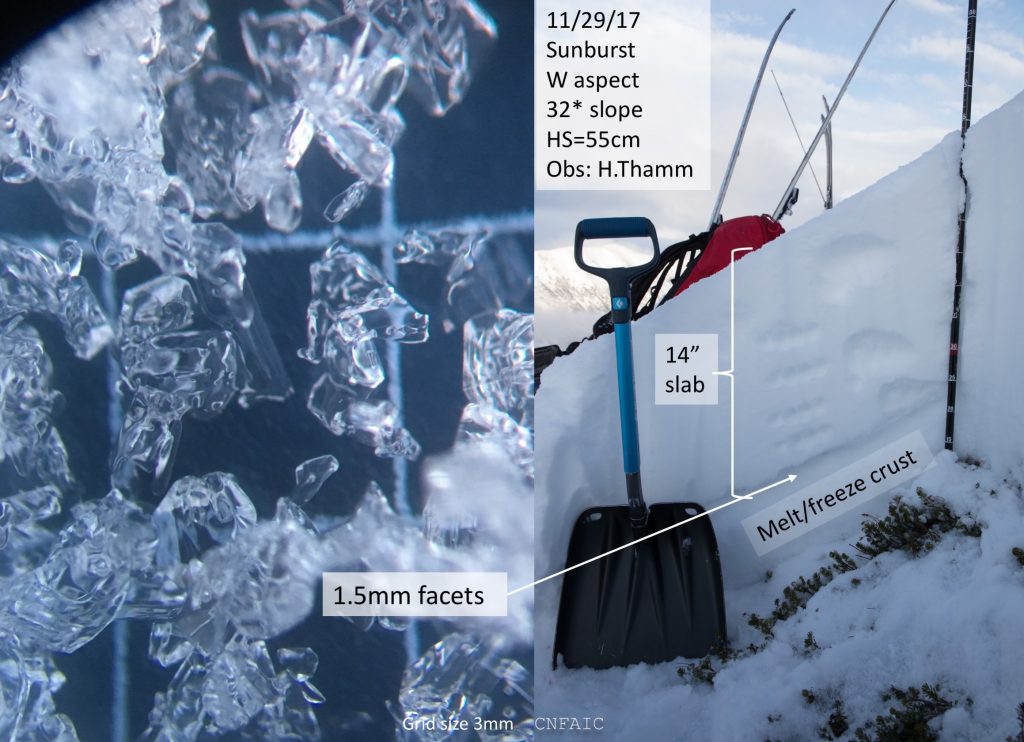 In wind exposed areas of the alpine the new snow/old snow interface is more variable, and wind slabs may have formed in places without weak faceted snow underneath. These wind slabs are likely isolated, 1-2’ thick on leeward features below ridge tops. Wind slabs could be soft or hard depending on exposure to winds and if triggered could release a larger persistent slab lower down on the slope. Digging hand pits and test pits will be good tools for looking at instability, but ultimately today is not the time to be pushing into steep terrain. Avoiding slopes greater than 35 degrees is recommended.

Yesterday rain was observed below 1000′ and varying amounts of snow fell in the mountains across our region. In the last 24hrs Girdwood received another 3 € of snow (.39 € SWE) Alyeska mid-way station and Turnagain Pass 1 € (.2 € SWE) at the SNOTEL site. Strong Easterly ridge top winds (20-40mph) decreased late morning to moderate (10-20mph) in the afternoon with gusts in the 30’s. Temperates have dropped to around 30F at 1000′ overnight, and temps are averaging in the mid 20F’s in the alpine.

Today up to 2 € of snow could fall as a front moves out of our region. Easterly ridgetop winds are expected to be 5-15mph and  temperatures will cool slightly in upper elevations to the low 20F’s and temps should hover around 32F at sea level.

This weekend another round of precipitation and warm temperatures is expected as a series of storms track through the Gulf of Alaska into Southcentral, Alaska. Although there is still not much confidence in how much precip and what type will impact inland areas, Coastal regions will likely see significant rain and snow.  NWS:   €œWhat we are starting to be able to say with some confidence is that southern Alaska is heading into a much warmer, windier (onshore winds), and potentially wetter (rain possibly even into the interior areas) for much of next week. Stay tuned for details. €