The avalanche danger  is CONSIDERABLE  above 1000′ due to weak snow sitting under 2-5+ feet of storm snow in Turnagain Pass, Placer Valley and Girdwood.  Human triggered avalanches 2-5+ feet deep are likely  today  and during the heat of the day natural avalanches will be possible  Careful snowpack evaluation, cautious route-finding and conservative decision-making are essential.

Below 1000′ a MODERATE avalanche danger exists where triggering a wet avalanche will be possible during the heat of the day.  Watch for changing conditions.

Hiking in Portage Valley and on summer trails around the Advisory area (including the Turnagain Arm Trail a.k.a the bike path).  Avalanches occurring at the higher elevations in this last storm sent large amounts of debris into valley bottoms and covered snow-free hiking trails. Continue to avoid trails that cross under avalanche paths such as Byron Glacier or portions of the Trail of Blue Ice and Crow Pass. The Turnagain Arm Trail between Bird and Girdwood remains  CLOSED for the winter.

Summit Lake:  An active avalanche cycle has occurred in Summit Lake this week and ELEVATED  CAUTION is advised.  Read the  Saturday Summit Summary  HERE  and observations from the last few days  HERE.

Southcentral Alaska has been experiencing a widespread avalanche cycle over the last week due to warm temperatures, snow and rain, and strong winds. Dangerous avalanche conditions are expected region wide including: Lost Lake, Hatcher Pass, and the Anchorage Front Range. With clearing skies and warm day time temperatures forecasted throughout the weekend, human triggered avalanches will be likely.

Today is less than 48 hrs since the 10 days of active weather ended and the snowpack still needs time to adjust. It is important to recognize that a widespread avalanche cycle occurred due to heavy snowfall, rain and strong winds in Turnagain Pass, Girdwood, Placer Valley, Portage Valley and Summit Lake. Large natural avalanches released on all aspects, particularly in the mid-elevation band below about 2,500’ and propagated across wide distances. Some avalanches stepped down into deeper weak layers and some ran to the ground. Yesterday there were large naturals observed running during the heat of the day in 20-mile. Last night there was a more significant freeze which should help. However, the biggest piece of data that should influence decision-making today is that there was a significant snowmachine triggered avalanche in Main Bowl yesterday afternoon. This was a least 2-3′ deep, large enough to bury, injure or kill a person and propagated onto lower angle terrain. The potential for large unsurvivable avalanches exists today. Slabs maybe slightly harder to trigger and it may not be the first person on the slope. Buried surface hoar and buried facets sit below all the storm snow and strong winds have created thick slabs. Slopes that didn’t slide during the storm are guilty until proven innocent which may be hard to assess. Wind loaded slopes deserve extra caution. Ease into terrain and avoid terrain traps. Follow safe travel protocols and pay attention to other parties in the area. Daytime warming will increase the likelihood of triggering. Conservative decision-making is essential. Don’t let the sunny Saturday lure you into an accident. Be patient.

How much load is on the old weak surface from March? Storm totals (March 27 – 6am April 7th):

CORNICES:
Strong winds throughout the storm cycle combined with the heavy snow have created large cornices overhanging leeward slopes. Avoid travel on or underneath cornices and remember they can break farther back than expected and could trigger a large avalanche on the slope below.

Natural avalanche in Warm-up Bowl that occured during the storm. This is very similar to the snowmachine triggered avalanche in Main Bowl. Photo: Travis Smith 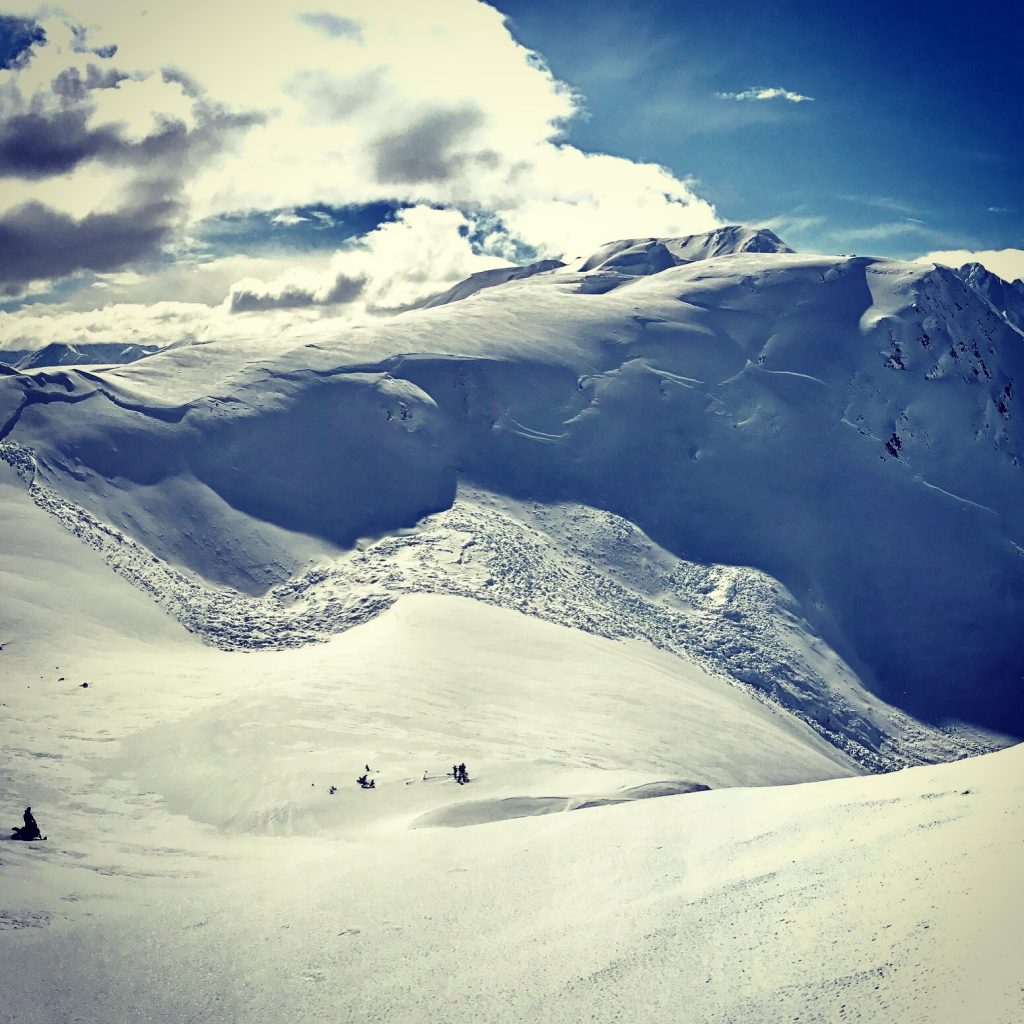 Snowpit on Tincan at 2500′ showed the March 27th buried surface hoar layer intact. This has the potential to be triggered today. 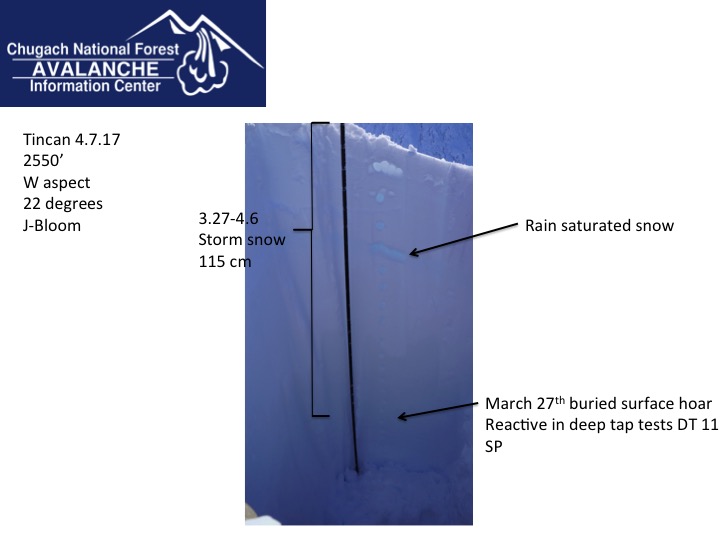 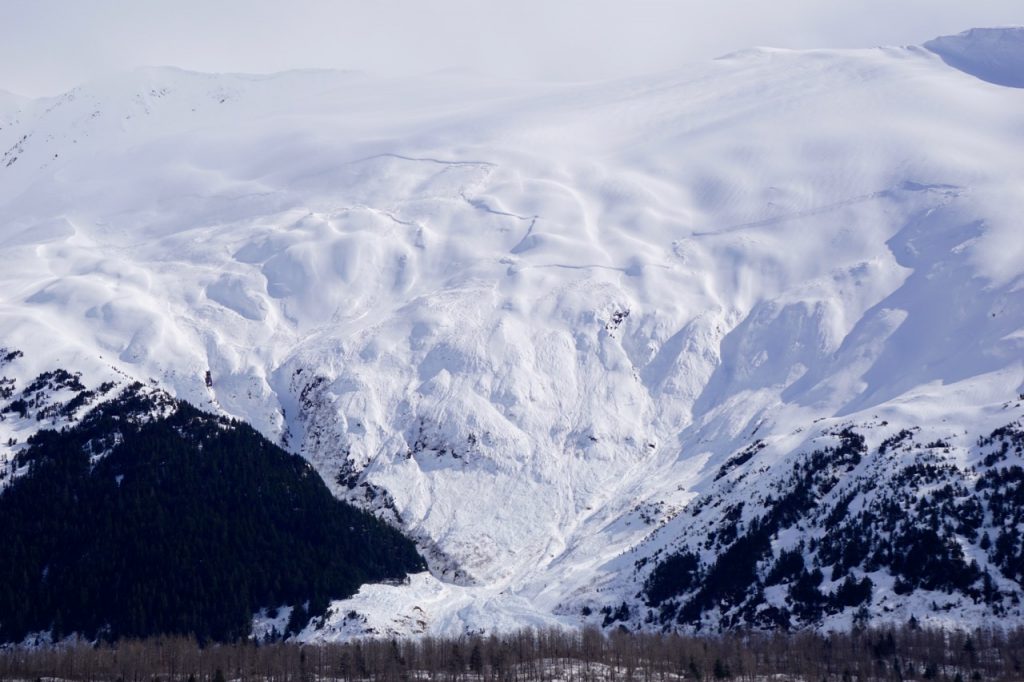 Widespread wet avalanches have occurred this week due above freezing temperatures and rain below 2700’. Yesterday there were sun-triggered avalanches in 20-mile, widespread roller ball activity and some wet loose avalanches on Southerly slopes. Mostly clear skies overnight and temperatures below freezing will have created a solid crust in the lower elevation band that could extend into the Alpine, especially on solar aspects. The snowpack is starting to stabilize in the lower elevations following a week and a half of rain. Temperatures are forecasted to rise into the 40Fs at lower elevations and as high as 30F in the Alpine. Solar heating is anticipated, either through thin clouds or direct sun light. The heat from the sun could initiate wet loose avalanches in the new snow in the mid and upper elevations with no crust. In the afternoon, if the crust melts wet avalanches will be possible at lower elevations as well. Pay attention to roller balls indicating surface warming and avoid slopes if you start sinking into wet snow on your skis or snowmachine.

Seattle Ridge including the uptrack. Natural slab svalanches from the storm cycle and wet loose activity from yesterday. 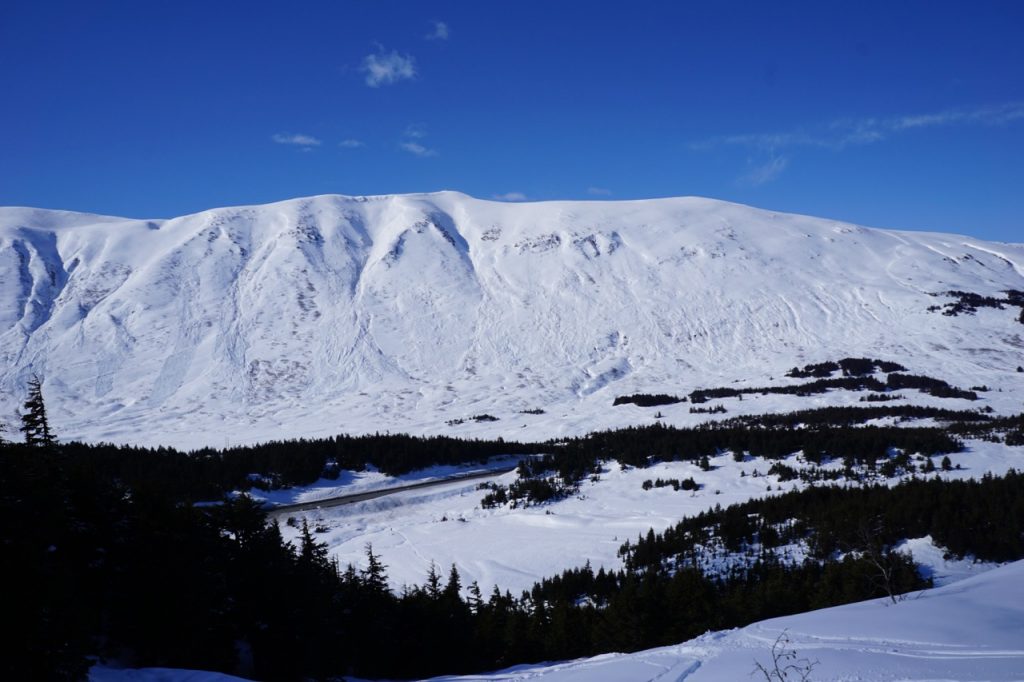 Magnum West face avalanches that occured during the storm cycle. 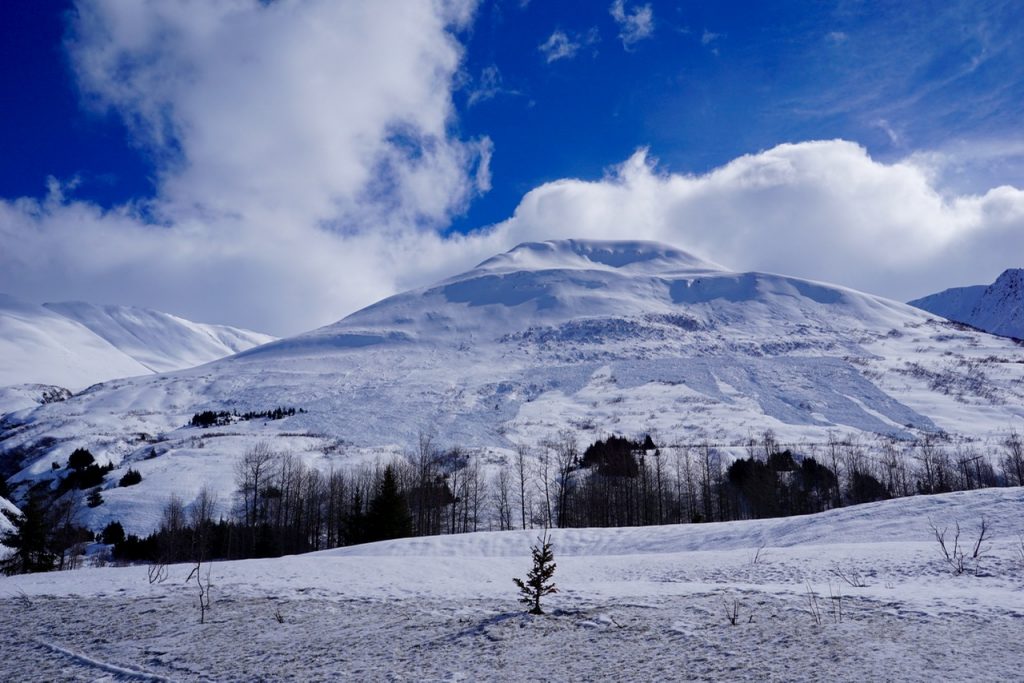 Yesterday was partly cloudy with warm temperatures and light Easterly winds. Temperatures were in the 40Fs in the valleys and the high 20s in the Alpine. Overnight temperatures dipped into the low 20s and winds were calm.

Today will be partly cloudy to mostly clear. Temperatures will range from in the 30Fs to 40Fs in the valleys to the 20-30Fs in the upper elevations. Winds will be light and variable. There is a 30% chance of precipitation. Tonight clouds may increase and it will be in the 20Fs.

Tomorrow will be partly to mostly cloudy and there is an increased chance of precipitation and slight bump in the winds. The weather pattern for the week looks to be fairly similar with diurnal temperature swings, light winds and a chance for a few showers. Stay tuned!

*Seattle Ridge anemometer was de-rimed and started recording at 3 pm. Thank you to the snowmachiners that cleared it off yesterday!