The avalanche danger remains HIGH above 1000′ due to a very unstable snowpack in Turnagain Pass, Placer Valley and Girdwood. Human triggered avalanches 2-6+ feet deep are very likely today, and during the heat of the day natural avalanches will be likely. CONSIDERABLE avalanche danger exists below treeline where a natural avalanche from above could easily run. Travel is not recommended in avalanche terrain. If choosing to play in the flats today, steer well clear of gullies and the bottom of steep slopes as many avalanches have been running full track to valley floors.

Hiking in Portage Valley:    Avalanches occurring at the higher elevations can send large amounts of debris into valley bottoms and cover snow-free hiking trails. Avoid trails that cross under avalanche paths such as Byron Glacier or portions of the Trail of Blue Ice.

Summit Lake: An active avalanche cycle has occurred in Summit Lake this week and travel in avalanche terrain is not recommended.  Read the  Saturday Summit Summary  HERE and observations from the last few days HERE.

Southcentral Alaska has been experiencing a widespread avalanche cycle over the last week due to warm temperatures, snow and rain, and strong winds. Dangerous avalanche conditions are expected region wide including: Lost Lake, Hatcher Pass, and the Anchorage Front Range. With clearing skies and warm day time temperatures forecasted throughout the weekend, human triggered avalanches will be likely.

Over the last 10 days, a widespread avalanche cycle has occurred due to heavy snowfall, rain and strong winds in Turnagain Pass, Girdwood, Placer Valley, Portage Valley and Summit Lake. Large natural avalanches have been releasing on all aspects, particularly in the mid-elevation band below about 2,500’ and showing potential to propagate across wide distances. Yesterday there was a report of a D5 avalanche in Portage Valley- this is the largest size avalanche on the destructive scale. Limited visibility has made it difficult to know the extent of the avalanche activity in the alpine elevation zone. A brief window yesterday on the Southern end of Turnagain Pass confirmed many avalanche paths are still in tact or have been re-loaded above 2500’.

Yesterday and additional 0.6” H20 fell in Turnagain Pass and .91” in Girdwood combined with strong Easterly ridge top winds. Storm related wind slabs 2-4+’ thick are likely, but could step down into deeper layers 6+’ deep. At this point it doesn’t really matter what the weak layer is because this is not an avalanche problem to mess with or try and out-smart.  The snowpack will remain touchy and human triggered avalanches are very likely in the mid and upper elevations today. These could run long distances.  Travel in avalanche terrain is not recommended.  Avoidance will be your best way to manage this problem, until the snowpack has a chance to recover and we can take stock of what is left of our snowpack.

How much load is on the old weak surface from March? Storm totals (March 27 – 6am April 7th):

Many of the SW aspects of Turnagain Pass still have areas that have not avalanched or have been reloaded. Lips South face is a good example and was activity being loaded by winds yesterday. 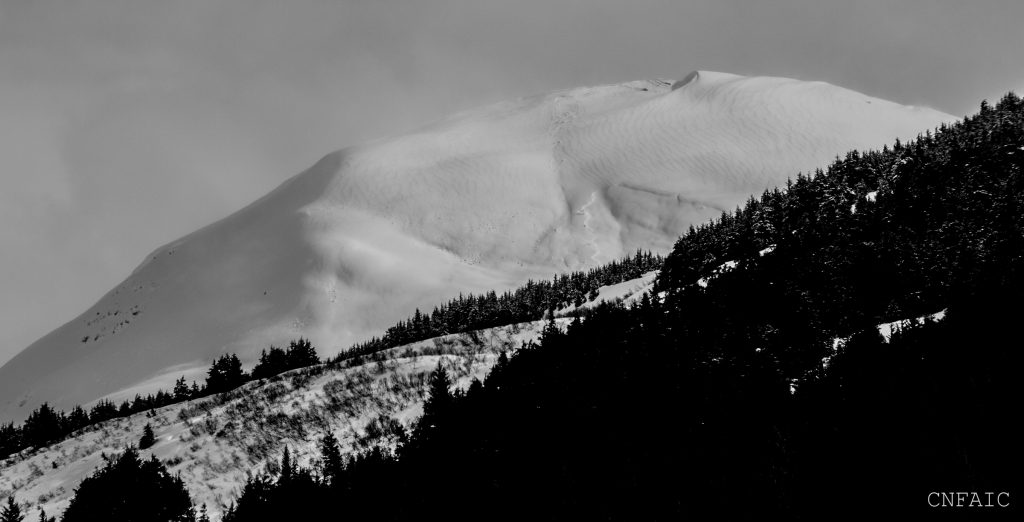 Significant wind loading on was observed on the Southern end of Turnagain Pass where good visibility allowed for a good view into the upper elevations yesterday. North side of Lips where winds were actively loading West and South aspects. 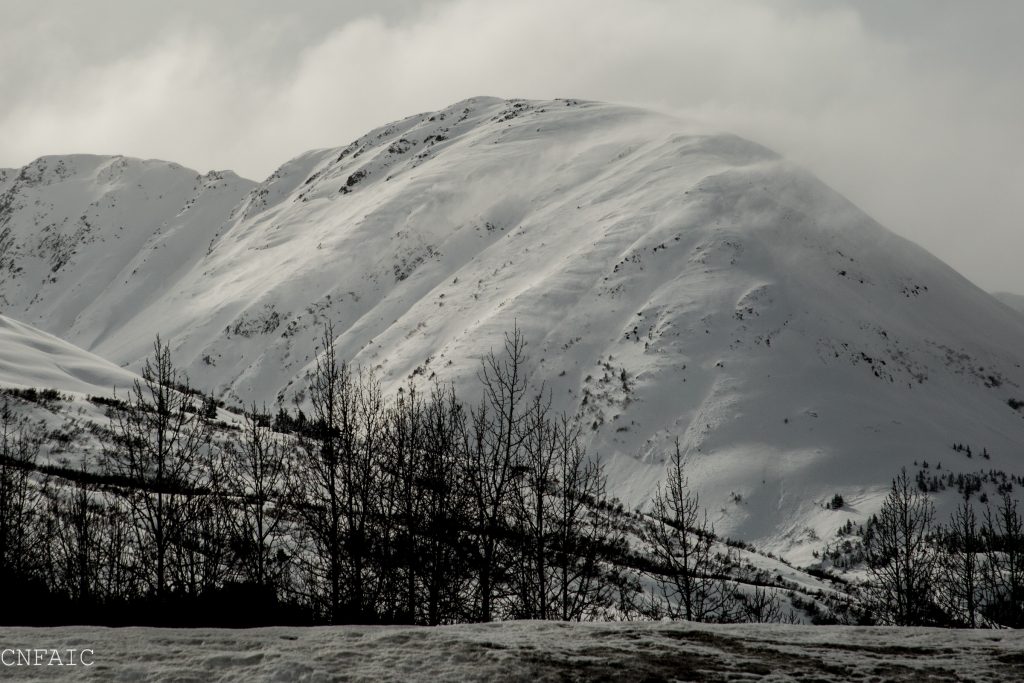 The balance has been tipped and avalanches this week have been observed stepping down into old weak layers. Dirty debris in places is indicative that some avalanches were running to the ground. Prior to this storm cycle the snowpack consisted of many weak layers of facets and buried surface hoar. We may continue to see avalanches today breaking in the mid-pack or near the ground, with crown depths over 6′ and running the entire length of a slide path.  Again, avoidance is key with this problem as a persistent slab avalanche in our current snowpack is not a survivable event.

East face of Seattle Ridge near the motorized lot. Natural avalanches this week have stepped down into deeper layers of the snowpack and in this case to the ground. 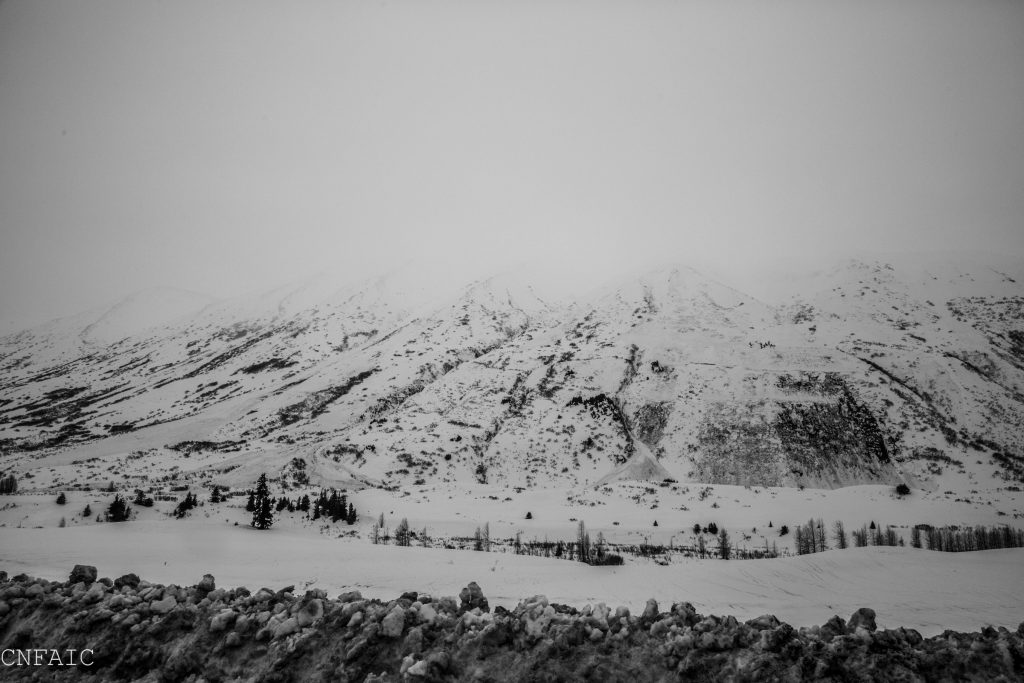 Widespread wet avalanches have occurred this week due above freezing temperatures and rain below 2500’. Yesterday morning temperatures cooled and an additional 2-10” of snow fell above 1000’. Overnight periods of clearing skies and temperatures around freezing have created an egg shell crust in the lower elevation band. This is the first sign of the snowpack is starting to stabilize in the lower elevations following a week and a half of rain. Today solar heating is anticipated, either through thin clouds or direct sun light. The heat from the sun could easily initiate wet loose avalanches in the new snow in the mid and upper elevations. In channeled terrain an avalanche from above could entrain wet snow in the lower elevations. Again it will be important to maintain a conservative distance from all runout zones and avoid all avalanche terrain, slopes steeper than 30 degrees.

Clean up crew along the Seward Hwy clears debris from the rail road tracks after avalanche mitigation work this week. 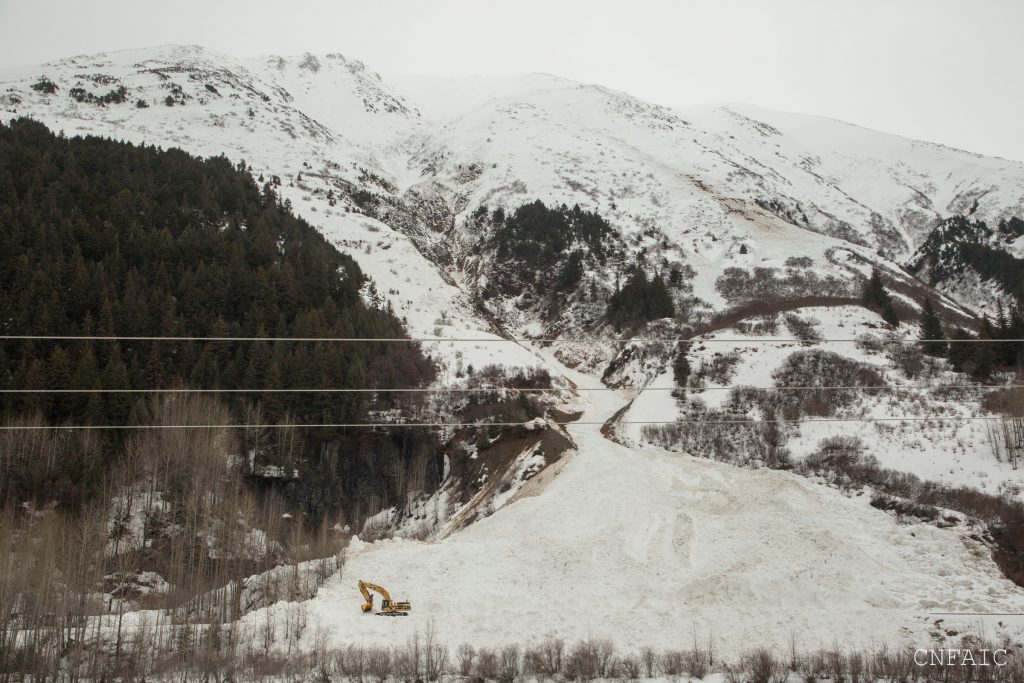 Yesterday 0.6 € of H20 fell in Turngain Pass and 0.91 € of H20 was recorded in Girdwood, an estimated 6-10″ of snow fell in the upper elevations. Rain/snow line was around 1000′. Easterly ridge top winds were strong, averaging in the 30’s mph and gusts in the 50’s mph. At 1000′ temperatures reached the low to mid 40F’s during the middle of the day and dropped back down to freezing 32F overnight. Partially clearing skies was observed in the early evening in Girdwood Valley and on the Turnagain Pass webcams. Satellite imagery confirmed periods of clearing skies overnight.

Today scattered snow and rain showers are expected, with only a small amount of precip, up to 0.08 € of H2O (1-3 € of snow in the alpine.) Rain/snow line may be as high as 1000′ with daily warming expected to bring temps at this elevation into the high 30F’s. Overnight temperatures are expected to dip below freezing at lower elevations. Easterly ridge top winds are expected to be moderate, 10-25mph, but could be stronger along Turnagain Arm.

A similar pattern is expected throughout the weekend with scattered snow/rain showers and periods of clearing skies. Not much accumulation is expected. Daily temperatures swings should range from 25F-40F. Ridge top winds are expected to decrease by Saturday.

*Seattle Ridge weather station only recored winds from 7am through 1pm on Thurs, April 6.
PRECIPITATION 24-hour data (6am – 6am)