The avalanche danger remains LOW at all elevations this morning. A chance for 2-4″ of new snow today along with light wind is not expected to increase the avalanche danger. However, if snowfall rapidly increases, and more than 6″ accumulates, the avalanche danger will rise to MODERATE for loose snow avalanches and shallow slab avalanches. Otherwise, triggering a slab avalanche will be unlikely. Keep in mind sluffs in steep terrain are possible on slopes harboring loose surface snow and could be fast moving. And as always, give cornices and glide cracks extra space and limit time under these features.

March 31st – the deadline for applying for your 2017 PFD is fast approaching!! Please consider showing your support for public avalanche centers when applying – the Friends of the Chugach National Forest Avalanche Center is an  official  Pick. Click. Give. organization!

After a week of mostly sunny and cool weather, a weak low-pressure system is moving through that could give us a few inches of low density snow – to sea level. As mentioned in the Bottom Line, 2-4″ is expected and will just be a dusting on our generally stable snowpack. These types of weak systems are tough to forecast and there is also a good chance we will only see cloud cover and a few flurries. Yet, as we saw last week, a system such as this one turned out to produce feet of snow in the Placer Valley – so the main topic for today is “what will this system do”?

Right now in the mountains we are in a ‘normal caution’ regime. This means avalanches are unlikely but not out of the question. Things to keep in mind will be:

STORM SNOW INSTABILITIES:  If over 6″ of new snow falls today, watch for easy sluffing in the new snow. The current snow surface harbors surface hoar with loose faceted snow underneath on Northerly aspects. On Southerly aspects a sun crust (1/2″ to 2″) caps the surface. Both of these surfaces will be hard for any decent amount of new snow to stick to. With such light winds forecast, loose snow avalanches will be the most likely avalanche issue. Yet, shallow storm slabs could form if the stars align and a foot or so of new snow falls.

PERSISTENT SLAB AVALANCHES:  There may still be some slopes harboring old slabs 1-2′ thick sitting on weak faceted snow. These slabs are composed of last week’s storm snow and have mostly been eaten away with the cold temperatures – faceting to the point they are now a weak layer themselves. Yet, old wind slabs that are still quite stiff may be able to pop out in steep rocky terrain.

DRY LOOSE SNOW AVALANCHES (SLUFFS):  Human triggered dry loose snow avalanches continue to be easily triggered on steep slopes without a sun crust. Watch your sluff if headed to steep terrain with loose surface snow, they could be larger and run further than expected.

CORNICES:  There have been a couple of cornice breaks after the storm and cornices are always worth giving a wide berth. Direct sunshine and warming can help to loosen them.

GLIDE CRACKS: Glide cracks continue to slowly ooze open on Seattle Ridge, Tincan’s Library, Lynx creek and other zones. Keep an eye out for them and limit time spent underneath.

WET LOOSE AVALANCHES:  If for some reason the sun pokes out and begins to warm the snow surface to the point of melting, it will be important to watch for wet loose avalanche activity on Southerly slopes. Avoiding these areas at times of melting is recommended. 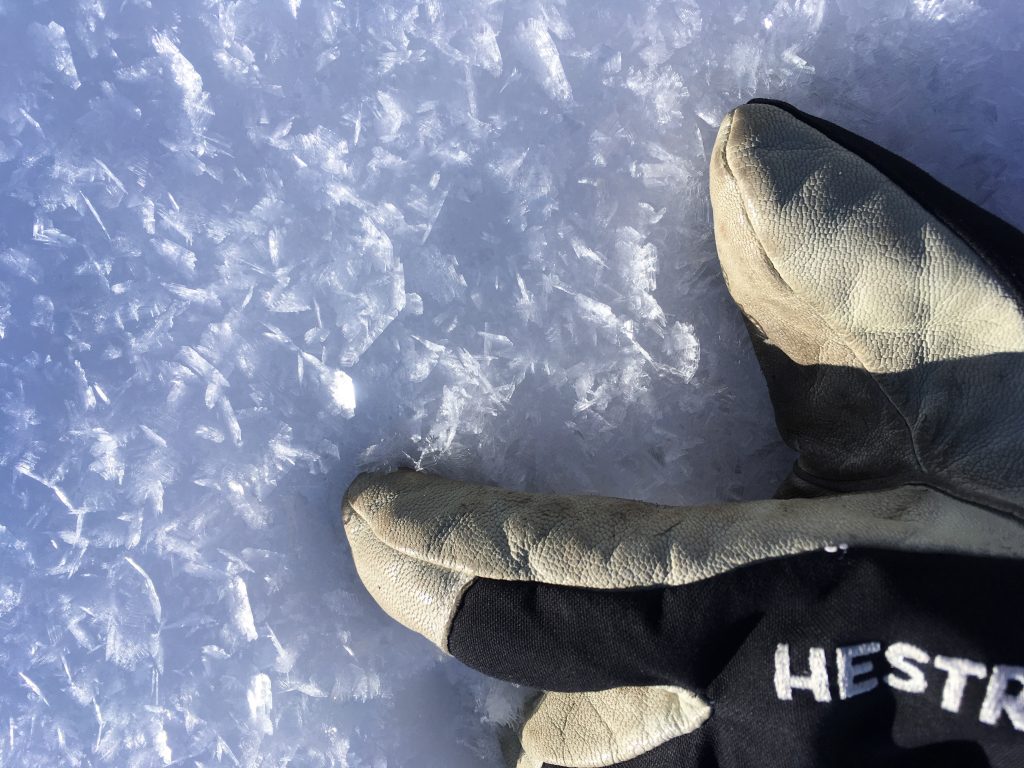 Partly cloudy skies filled the region yesterday. Temperatures bumped up in the afternoon to near 20F along the ridgetops and to 30F in the parking lots, for a very springlike feel. Ridgetop winds have remained light (5-10mph) from an Easterly direction for the past 24-hours. Temperatures have cooled overnight and sit in the single digits in valley bottoms as of this morning and the teens at 1,000′ along Turnagain Pass.

For today, a weak low-pressure system is moving through that will bring mostly cloudy skies and scattered snow showers. As of this morning, the bulk of the precipitation is over near Cordova (see Radar) but it may shift just enough to send us 2-4″ (to sea level) in certain areas by tonight. Ridgetop winds are slated to remain light from the East in the 5-10mph range as this low-pressure moves by. Temperatures will climb from the single digits into the mid 20’s F or 30F at lower elevations with the high elevations reaching near 20F.

Another weak low-pressure looks to move through Tuesday night bringing another chance for a few inches of snow to sea level. On Thursday a significant pattern shift will occur as a large low-pressure heads our way bringing strong winds, warm temperatures and precipitation (rain to 1,000′ possibly) – stay tuned.