There is a LOW avalanche danger on all aspects and at all elevations in the Turnagain Pass area and surrounding mountains. Although triggering an avalanche is unlikely, it will still be possible to get a small wind slab avalanche to release as well as loose snow avalanches (sluffs) in the steep terrain. Remember to give cornices a wide berth and limit exposure under them. Additionally, there are some glide cracks opening up, watch for these and limit time under them as well.

Avalanche Rescue Talk:  Stop by Ski AK in Anchorage for a discussion on backcountry rescue tomorrow evening! The focus will be on organized rescue, presented by Bill Romberg (AMRG) a rescue specialist with 150 Search and Rescue missions here in Alaska. The evening will begin with a short ‘state of the snowpack’ report by the CNFAIC. See you Tuesday night – more details  HERE!!

As cold and clear weather dominated not only the past week, but will dominate the coming week as well, our snowpack is in a holding pattern of sorts. It has been 13 days since the last measureable precipitation and a week since the beginning of the Northwest ‘wind event’. Several large wind slab avalanches have occurred over the past week, most of these in the Summit Lake area South of the forecast zone. However, we did get a report of a suspected natural wind slab avalanche in the Girdwood Valley yesterday, on the North end of the forecast zone. This was on an upper elevation, Southwest facing slope, under Goat Mountain (photo below).

If you are headed to the mountains, the avalanche conditions are in a ‘Normal Caution’ regime. This means, avalanches are unlikely, but not impossible. Things to watch for and keep in mind will be:

Wind Slabs:
Old, stubborn and hard wind slabs could pop out in steep and rocky terrain. This is most likely where weak faceted snow sits under shallower hard slabs – usually found in the steep rocky thin zones. Watch for hard snow over weak loose snow as well as shooting cracks and whumphing noises.

Loose Snow (Sluffs):
Dry sluffs on steep slopes are getting larger in areas harboring loose surface snow – watch your sluff! Also, with the decreased winds, the Southerly aspects that have not been sun affected yet could become damp or wet. This may cause natural or human triggered wet/damp sluffs on some steep Southerly slopes.

Glide Avalanches:
Glide cracks continue to slowly open on the Southeast face of Seattle Ridge and in the Skookum drainage. These could release at any time, watch for cracks and avoid being under them.

Cornices:
We have not seen, or had any reports of, cornice falls since the Valentine’s Day Storm period. Nonetheless, these should always be given a wide berth from above and limited exposure underneath.

Persistent Slabs and Deep Slabs:
There are various weak layers in our thin snowpack; the snowpack is roughly half of what it normally is this time of year. Buried surface hoar sits 1-3+’ below the surface and faceted snow sits in the mid and base of the pack. These various weak layers with varying degrees of strength are in a dormant stage due to a lack of weather and ample time to adjust. Although this means the layers are not producing avalanches, it doesn’t mean an outlier can’t occur which causes a large avalanche breaking deeper in the pack.

Reported natural avalanche from Surprise Bowl along the Southeast ridge of Goat Mtn. The recent natural is the pocket on the far right side of the photo while the small slab in the center of the photo released at an unkown time. 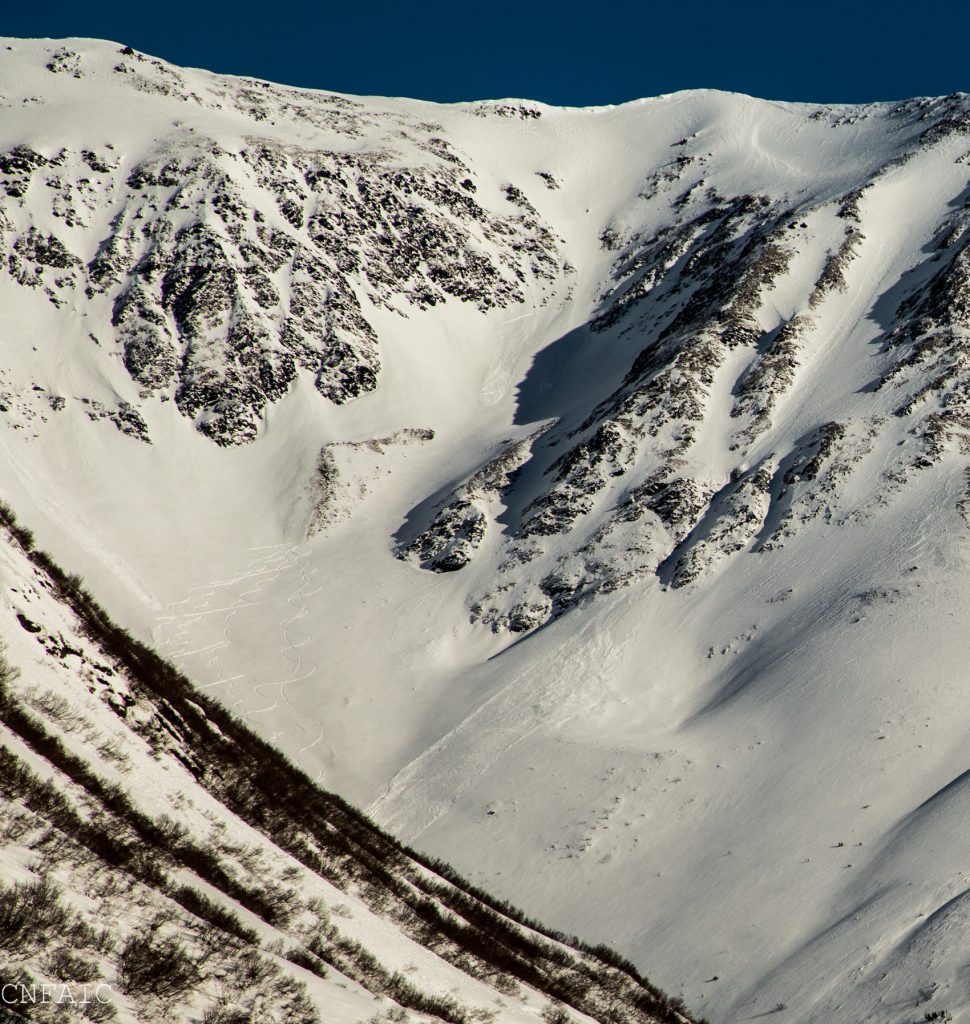 It was another sunny and cold day in the backcountry yesterday. A late day bump in winds added to the wind chill for those at the higher elevations. Temperatures did climb to the mid 20’sF at sea level during the day before dropping back to the 0F zone last night while ridgetop temperatures remained in the 0-5F range. Ridgetop winds blew between 10-25mph from the Northwest before slowing down overnight to the 5-10mph range.

For today we can expect the ridgetop winds to remain light, 5-10mph from the North. Temperatures will again be cold, in the -5 – 5F range with daytime warming into the mid 20’sF at the lower elevations. Sunny skies are again on tap.

Looking ahead to the workweek, it seems the blocking high pressure over us will remain entrenched through the week and into the weekend. This will continue to bring cold and clear weather with no chance for precipitation.