There is a MODERATE avalanche danger on all aspects above 1,500′ where triggering a  slab avalanche 2-3′ thick is possible on slopes steeper than 35 degrees and could have high consiquences. In addition there are a handful of other avalanche concerns to be aware of including fresh shallow wind slabs, cornice fall and loose snow point releases. Also its worth mentioning that a glide crack has opened up on Seattle Ridge and continues to creep open on Repeat Offender. Be aware of it and limit time below if you are near the uptrack.

Below 1,500′ there is a LOW danger where triggering an avalanche is unlikely due to a snowpack consisting of hard crusts.

In Summit Lake, Girdwood, and near Johnson Pass triggering a deeper more dangerous avalanche near the ground is still possible but will be hard to trigger. If headed to Summit Lake please check out the weakly summary HERE.

It’s been almost a week since the Valentines Day storm dumped 2-3’ of heavy snow on top of a weak surface (surface hoar and/or near surface facets.) On Saturday several human triggered avalanches occurred on Seattle Ridge, and luckily there were no reports of anyone being caught. Poor visibility over the last two days has made travel into the alpine challenging and has limited traffic and observations in this zone. The good news is with time, the slab has been adjusting to the weak layer below, making it more difficult to trigger. However the consiquences remain high, meaning it is still possible to trigger an avalanche large enough to bury, injure or a kill a person. Be aware that no red flags may be present (whumphing or cracking in the snow) and the pack could have a general “it seems fine to me” feel before someone finds a trigger point. Trigger points are often where the slab is thinner, near rocks or scoured areas. Also keep in mind, these slabs can break above you, release after several tracks are on a slope and be triggered remotely. The trickiest part about our current snowpack is how difficult it is to assess due to the spacial variability of both the weak layer, the slab, and even the bed surface in some places. Some steep solar aspects (S-SE) may have a slick sun crust bed surface/buried surface hoar combo. Be aware that snow pits and stability tests may not be representative of the actual slope you are trying to assess.

This snowpit from yesterday on a West aspect of Taylor Pass shows all of the weak layers described in both the Persistent and Deep Slab poor structure. This location did not produce any conderning results, but its still good example of the difficulty in assessing these avalanche concerns. 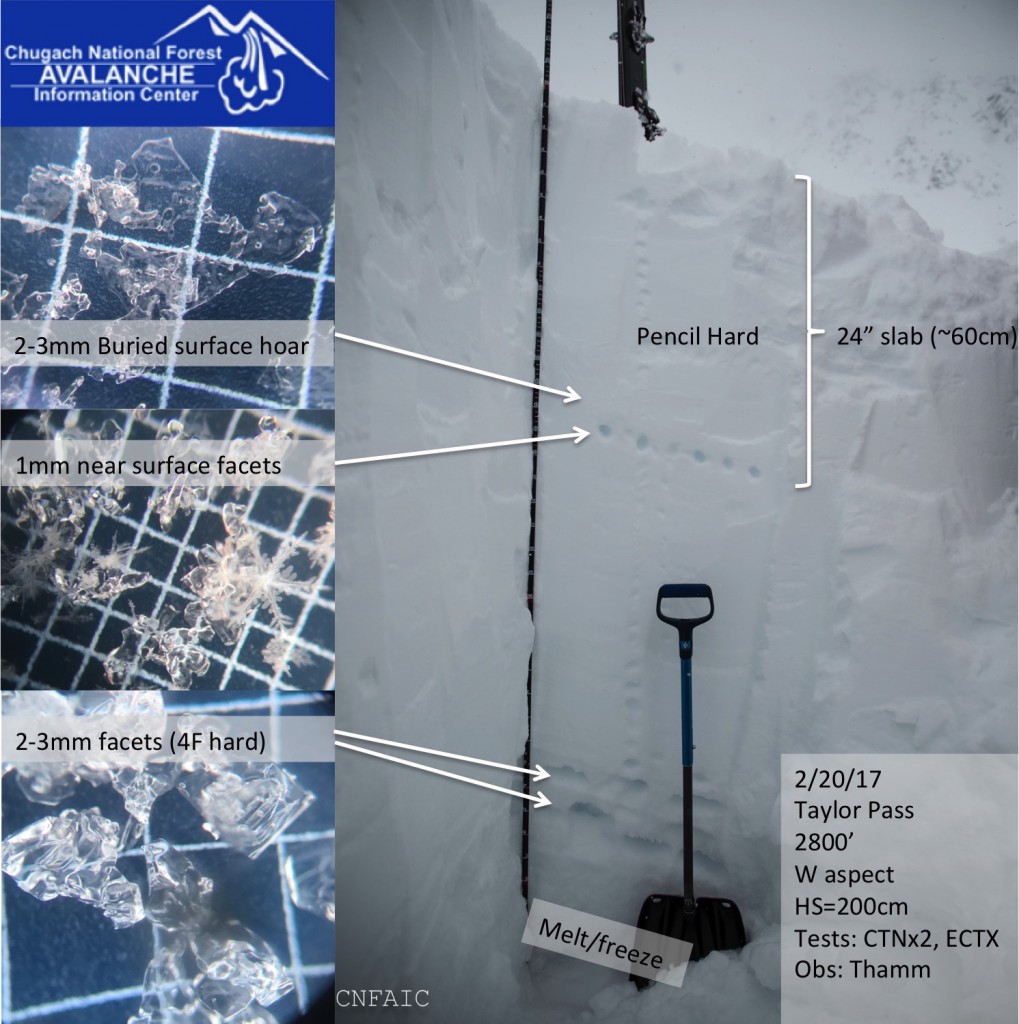 Human triggered avalanche that was reported second hand on Saturday in Seatte Creek on JR’s, Southern aspect. If anyone has info or details about this avalanche please submit an observation HERE. Photo taken on Monday, 2/20/17 by Bryan Pfaender. 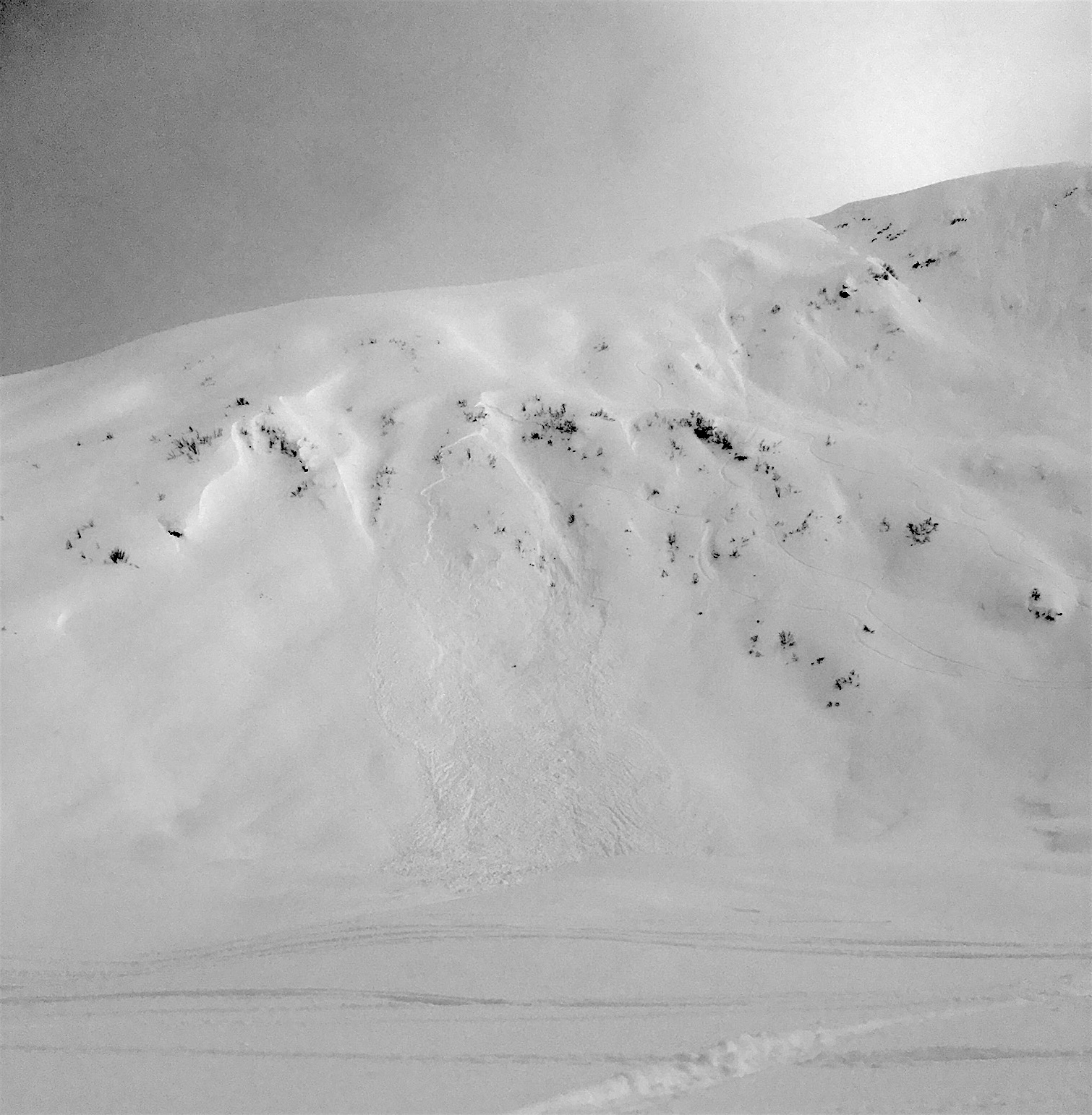 WIND SLABS: There is 3-6” of very light weight fluffy snow on all aspect throughout our region and ridgetop winds 5-15mph are in the forecast today. If this is the case expect small isolated wind slabs to be easy to trigger on leeward features. Be aware that Northwest winds can funnel through some terrain in Turnagain Pass in more of a Southwest direction, causing an unusual loading pattern.  Although these slabs are not expected to be very dangerous, don’t let one catch you off guard in a the wrong place. Watch for blowing snow and identify steep features where the snow may be loading.

LOOSE SNOW:  Sluff will also be easy to initiate on steep features and could be fast moving

GLIDE AVALANCHES: There is a new glide crack above the flats along Seattle Ridge, just looker’s left of the up-track and Repeat Offender slide path. Avoid hanging out under this crack and any others you may see – these release without warning and are very destructive.

SUNSHINE? Although winds are expected to keep the surface cool today, be aware of solar warming that may trigger loose snow avalanches in steep Southerly aspects.

At the bottom of the snowpack are various layers of facets with varying degrees of strength. In the Summit Lake zone and some areas in Girdwood Valley and Johnson Pass depth hoar has been found as well as some areas in Turnagain Pass. Last week’s storm cycle tested these layers and only a few avalanches that we know of broke in them (Girdwood Valley, Portage and Summit Lake). These layers will be tough for people to trigger, but possible in shallow snowpack zones. The more likely case is where an avalanche occurring in the upper layers of the pack has the potential to step down and release the entire snowpack. If this does happen the volume will be large and could run long distances.

Today skies will start out mostly clear becoming cloudy be this afternoon as a front moves into our region. Ridgtop winds are expected to increase 5-15mph from the NW throughout the day with winds increasing to the mid 20’s from the SE by this evening. Temperatures are also expected to warm up into the teens F by the afternoon. Snow flurries are in the forecast and 1-3 € of snow expected by this evening.

Tomorrow night into the Thursday a second warm front is expected to bring more snow and warmer temperatures. There is much uncertainty as to how much accumulation will occur in Turnagain Pass zone.