Above freezing temperatures, heavy snowfall, rain and strong winds are keeping the avalanche danger at HIGH for all elevations around Turnagain Pass, Placer Valley and Girdwood. An Avalanche Warning has been issued for Turnagain Pass, the Kenai Mountains and Western Chugach Mountains and will remain in effect through 6am tomorrow, Feb.15.   Travel is not recommended in avalanche terrain where natural avalanches are likely occurring due to rapid loading. Later in the day as heavy precipitation and strong winds diminish above freezing temperatures will keep the avalanche danger elevated.

There will be intermittent traffic delays  Tuesday, February 14, 2017  on the Seward Highway for avalanche hazard reduction work between Bird and Portage near mileposts 100 to 80.   Motorists should expect delays of up to 1 hour between  8:30 am and 2:00 PM.

Have you purchased your tickets yet for the  3rd Annual SNOWBALL??  If not, get them  HERE!!  Come out, get your groove on, win some door prizes, bid on some amazing silent auction items and support avalanche safety and education!  All proceeds to benefit  Alaska Avalanche School  and  Friends of the Chugach National Forest Avalanche Information Center.

Numerous natural avalanches were observed yesterday and natural activity is expected throughout the day with continued weather impacting our region. This includes large natural slab avalanches 2-5’ thick in the alpine and wet avalanches below 2000’ due to heavy rain and above freezing temperatures. Avalanche activity could run the full length of a slope, thus it will be important to stay off any slopes greater than 30 degrees and avoid being near any runout zones today. This set up could be a hazard even in the Tincan Trees where a small terrain features could have high consequences. In channeled terrain an avalanche from above could easily entrain wet snow in the lower elevations and run further than expected. This will be especially important in places like Portage Valley, Johnson Pass trail and the flats below Seattle Ridge.

Storm totals for Turnagain Pass over the last two days are estimated around 2-3’ in the alpine with an additional 10-12” possible today. For the second evening in a row ridgetop winds from the East (SE to NE) have picked up into the 40s and 50s mph and early this morning several gusts reached over 100 mph at Sunburst weather station. Above freezing temperatures have been recorded at Center Ridge weather station (1800’) and its possible that rain/snow line may reach 2000’ by this afternoon.

In the afternoon temperatures are expected to increase as precipitation and winds back off. Similar to yesterday natural activity may increase with a little afternoon sun and/or above freezing temps in the upper elevations. Again it will be important to avoid ALL steep terrain and maintain a conservative distance from all run-out zones.

Avoidance of avalanche terrain is the only way to “manage” this problem today.

A natural avalanche observed in Portage Valley yesterday afternoon near Williwaw Campground. This avalanche was well away from the road cooridor. 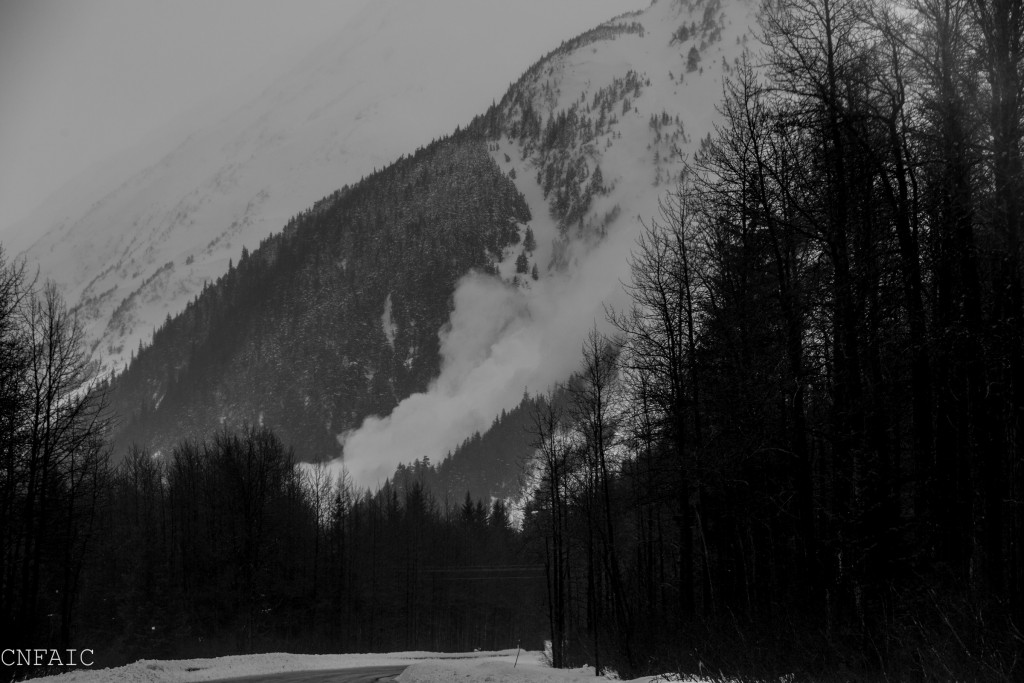 Partial clearing in the afternoon allowed the DOT web cam to catch this avalanche some time after it released on Tincan, CFR ridge. It was first noticed at 2:35pm on the web cam, but this is the best photo. 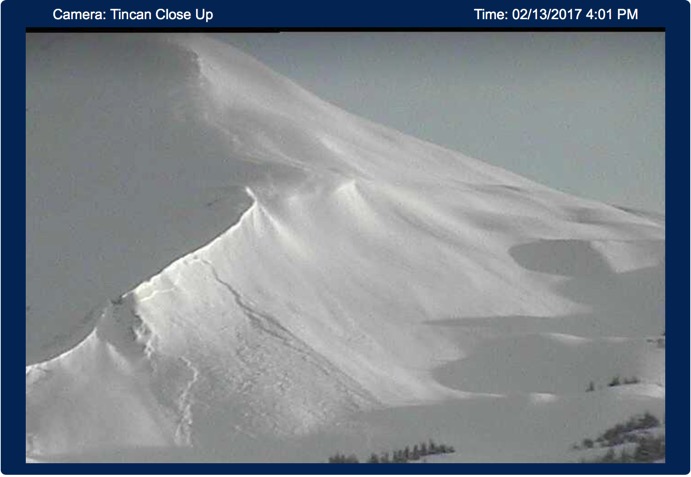 Wet loose activity was observed on many slopes after the sun appeared briefly in the afternoon. Photo taken near Portage turn. 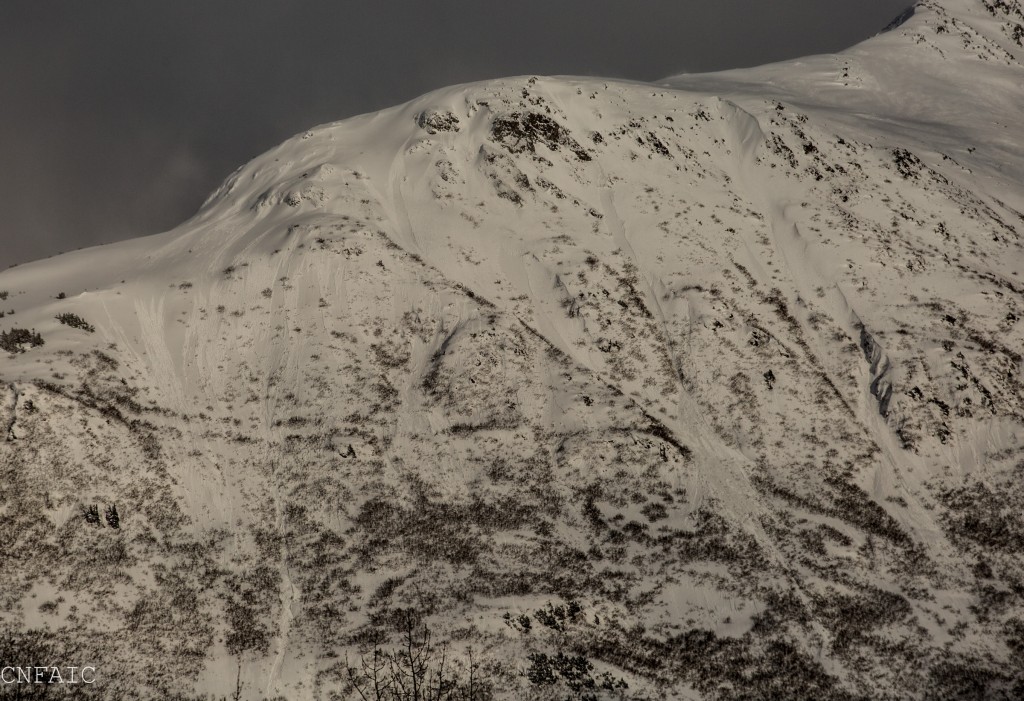 Weak snow (facets and depth hoar) in the lower layers of the snowpack continues to be a concern in our advisory area. Today avalanches occurring in the upper layers have the potential to step down and release the entire snowpack in some places. If this does happen the volume will be large and could run long distances.

Travel in avalanche terrain is not recommended today including being in the runout of a steep slope.

Yesterday above freezing temperatures were observed along Turnagain Pass with a partial clearing late afternoon, where the sun was observed briefly. Strong (40-50mph) Easterly ridge top winds decreased to moderate (20-30mph) in the afternoon. Overnight ridge top wind increased into the 40-60’s mph range with several gusts in the 90-100mph mph’s on Sunburst weather station. In the last 24 hour (6am to 6am) about 12-15 € of snow fell in upper elevations (1 € of H2O) in Turngain Pass and 15-20 € of snow (1.5 € H20) in Girdwood.

Today as an intense front moves through our region heavy precipitation is expected to last through mid morning, this is snow above 2000′, with an additional 10-12 € of snow. Strong Easterly ridgetop winds are expected to decrease into the 20-30mph range by early afternoon, but expect gusts to still be in the 40’s mph. Expect above freezing temperatures into mid elevations and rain/snow line to be as high as 2000′.

*Seattle Weather station was not working for part of the day yesterday and there appears to be an issue with the temperatures sensor.