The avalanche danger is MODERATE  at all elevations in Turnagain Pass but could rise to CONSIDERABLE in the alpine  by the afternoon. Human triggered wind slabs 6 €-15 € thick are possible on slopes steeper than 35 degrees and slab size will depend on how much snowfall we receive today. There is also the possibility for triggering a large (2-3′) slab avalanche that breaks lower in the snowpack. The most suspect areas are on the South end of Turnagain Pass where the snowpack is shallower and there has been little traffic this season.  Last, cornice falls are still a concern along ridgelines and small wet loose avalanche are possible below 1000′ should snow turn to rain.

Girdwood Valley:   A shallower snowpack exists in the Girdwood Valley and slab avalanches have the potential to be larger, over 3′ thick, and break near the ground.  Expect wind loading and snowfall today to add stress to an already stressed out snowpack.

**The probability of triggering one of these large slabs is decreasing but the consequences remain high. This is more reason to be sure to carry your rescue gear and practice safe travel protocol – such as exposing one person at a time, grouping up in safe zones, having escape routes planned and watching your partners!

Wind Slabs: Yesterday afternoon ridgetop winds bumped up into the 30’s mph from the East and wind loading was observed in the alpine. Today an additional 3-8” of snow is expected and ridgetop winds will be in the 15-30mph range. Expect wind slabs to be tender, 6”-15” thick on leeward terrain features.  These fresh slabs are expected to be sensitive to human triggers on slopes steeper than 35 degrees. Visibility may be limited today, but watch for blowing snow, stiffer snow over softer snow, or cracks that shoot out from your snowmachine or skis. Slope testing small (low consequence) slopes and performing quick hand pits are all good ways to assess whether you have found a wind slab. Should snowfall become heavy today or more snow falls than forecasted, these slabs could increase in size and become more consequential. Be prepared to change your plans should conditions worsen.

Wet Snow: There is some uncertainty today in how warm temperatures will rise and how much precipitation will fall. Should snowfall transition to rain, small wet loose avalanches are possible in the lower elevations below 1000’. These are not likely to bury a person, but could catch you by surprise especially in areas with terrain traps. This will be an important thing to keep in mind if headed to the Placer Valley today.

Cornices have been growing in size over the last few weeks and with additional loading today could be extra tender. Give these unpredictable features extra space along ridges and avoid being under these features, as they could release naturally and without warning.

Cross loaded gullies with pillowed snow along ridges – an example of terrain features that may harbor tender wind slabs today. Photo taken 1/30/17 of an East facing slope on the South end of Seattle Ridge near Bertha Creek Camp Ground. 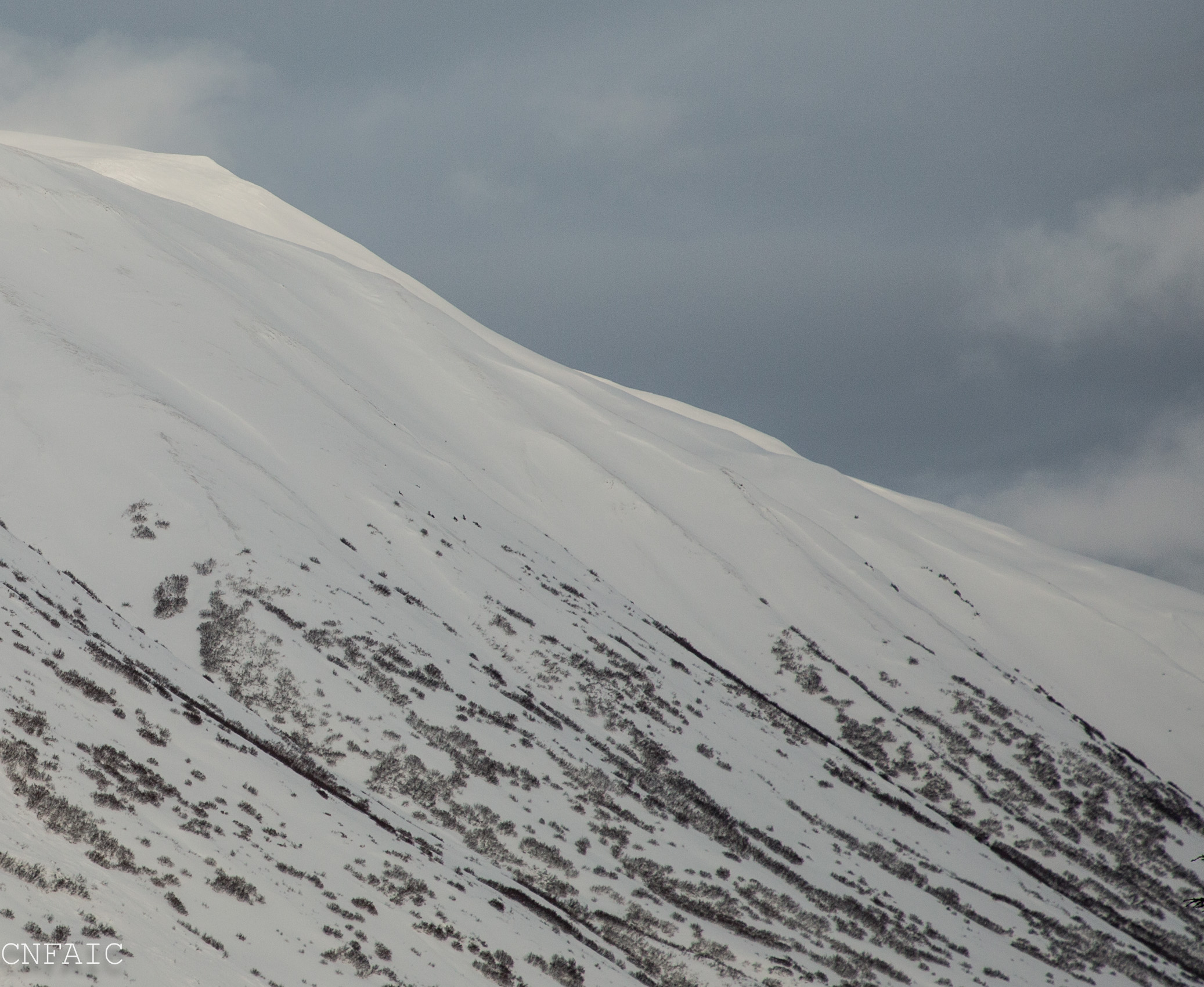 The January 26th storm event added 2-3′ of snow to the upper elevations and overloaded a variety of weak layers causing a widespread avalanche cycle in the region. The good news is the snowpack in the heart of Turnagain Pass is showing signs of adjusting to the load, the bad news is other areas are not. This can make for difficult snowpack assessment as the weak layers of concern (depth hoar, facets and buried surface hoar) are lurking anywhere from 2-4+ feet below the surface. Thicker snowpacks, as found at Turnagain Pass, had a stronger snowpack to begin with and has allowed for a quicker adjustment. This is opposed to the persisting unstable snowpack found South of Turnagain Pass and the Girdwood Valley.

In Turnagain Pass – this is a high consequence but low probability situation and may require a big trigger like multiple people on a slope or finding just right trigger spot in a thinner area of the snowpack. In Girdwood, Johnson Pass, and Summit Lake today’s storm will be adding stress to an already stressed snowpack and tipping the balance may be easier in these locations. Should you experience collapsing “whumpfing” sounds, or see any avalanche activity, these are obvious clues the snowpack is unstable.

If choosing to ride or ski the steeper terrain, we recommend using safe travel protocol, only exposing one person at a time and grouping up in safe zones. If a large slab is triggered it may run further than expected and wrap around terrain features taking out mid-slope relative safe zones.

A Northern aspect of Pete’s South where a generally thinner snowpack exists and where there’s more potential to trigger an avalanche in an older deeper layer of the snowpack. Photo taken yesterday 1/30/17. 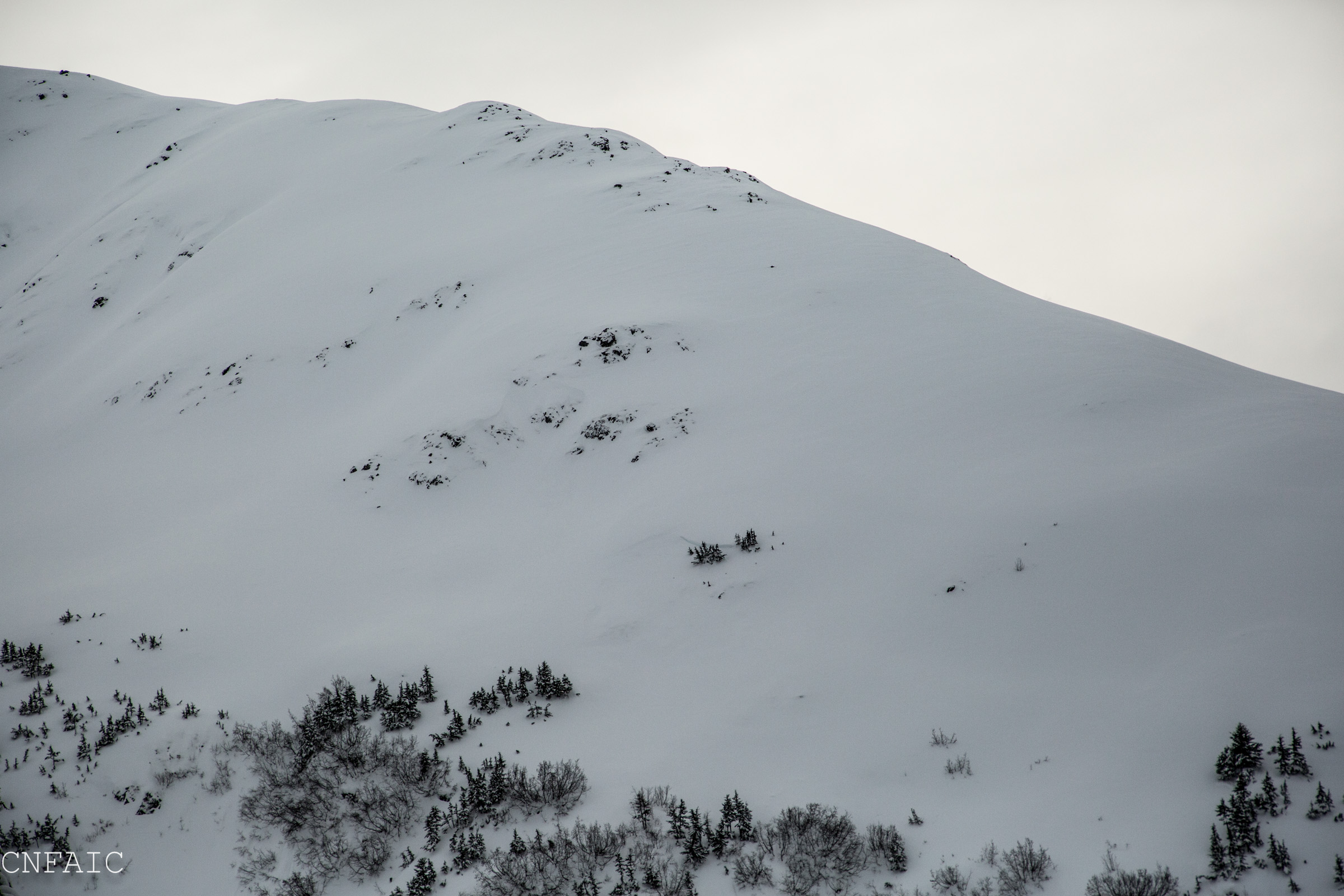 Yesterday temperatures were on the rise throughout the day approaching the low 30F’s near sea level by late afternoon. Skies were cloudy becoming overcast by mid day. Moderate Easterly ridge top winds, 15-30mph, bumped up into the mid 20’s mph by late afternoon with gusts in the 40’s. Only an inch of new snow was recorded overnight.

Today a frontal system has pushed into the Gulf of Alaska and warm temperatures and snowfall are expected. There is some uncertainty as to how much will precipitation will fall, with a range from 3-8 €, but more or less is possible. Easterly ridge top winds are expected to be moderate,15-30mph. Above freezing temperatures are expected below 1000′, and rain may fall into this elevation band today. Tonight there is a chance for an addition 2-6 € of snow.