There is a generally  LOW  avalanche danger in the mountains surrounding Turnagain Pass. Although triggering a slab avalanche is unlikely, old hard wind slabs 1-3′ thick sitting on faceted snow remain in some places. With the right trigger spot and/or the right amount of force (several people and/or snowmachines) it may not be impossible to get a slab to pop out. Most suspect areas are unsupported slopes in steep rocky terrain.    Additionally, avoid being underneath glide cracks as these have been active over the last week.

Join us tonight, Thursday January 12th, 6:30pm, for a FREE basic avalanche awareness and discussion by  CNFAIC on the current snowpack in Turnagain Pass  at the Alaska Avalanche School, Details  HERE.

* Hatcher Pass continues to have  unstable conditions,  check the Hatcher Pass advisory  HERE  if you are thinking of heading this way. Also – mark your calendars for the  FREE rescue workshop at Hatcher Pass on January 14th.  More info  HERE.

It is always important to keep in mind that LOW avalanche hazard does not mean NO avalanche hazard. It has been two weeks since a big wind event caused widespread avalanches throughout our region. This wind event left behind a variable snowpack in the alpine including wind affected hard/old slabs, anti tracks, scoured ridges, sastrugi, breakable wind crust, and in protected areas, pockets of soft old faceted snow. If heading out into the mountains today remember the snowpack has a poor structure on upper elevation slopes that have not avalanched and that were loaded by past winds (mainly on North and East aspects). Hard wind slabs sit on faceted snow and/or buried surface hoar in some places. Luckily stable weather conditions have been helping the snowpack adjust over the last few weeks. Due to the variability across our region triggering a stubborn old hard slab is not completely out of the question. Thin rocky areas and steep convexities with poor snowpack structure are most suspect. This particular set-up has more potential in the periphery areas like Johnson Pass, Girdwood Valley and Summit Lake where a generally thinner snowpack exists.

As always practicing safe travel protocol is key (exposing one person at a time, grouping up in safe zones and having an escape route planned). Looking at potential consequences of even a small avalanche in complex steep terrain is an important consideration before committing to a slope.

Below is a photo of an East facing slope on the South end of Seattle Ridge near Berth Creek Campground. Snow depths in this area vary from 6″ to 18″, about 1/2 the overall depth compared to the North side of the pass on this same aspect. 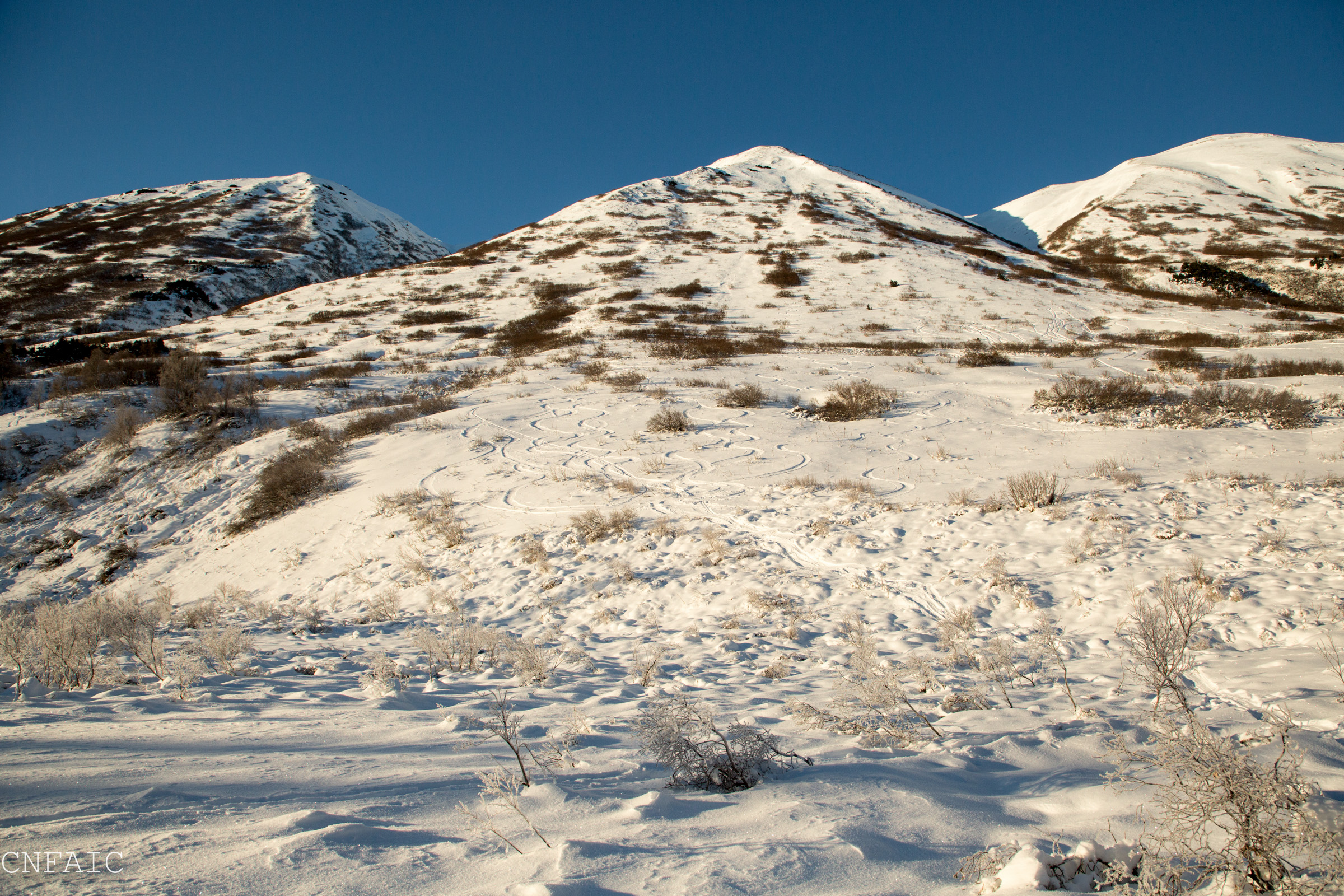 Last week 3 glide cracks released and more have been slowly moving and opening up this weak in some areas of Turnagain Pass.  Known cracks exist on the South face of Eddie’s, Goldpan (behind the Magnum ridge), East face of Seattle Ridge (Northern end), Main Bowl and Southerly slopes near Johnson Pass. It is important to be on the look out for glide cracks as you move through the mountains and avoid spending time underneath. Glide cracks are unpredictable and can release without warning.

Yesterday skies were clear, winds were light from West and thick valley fog accompanied inverted air. This inversion has been in place for 4 days, but was loosing some strength with upper air temperatures dropping into the mid 20’s F. Cold air remained in valley bottoms and temperatures varied from -8 to 12 F.

Today clear skies will become cloudy by the evening and valley fog should dissipate.   Warm air from above will mix with the cooler surface air and temperatures are expected to average in the teens (F.) Light ridge top winds will shift from a Westerly direction to an Easterly by this evening with a chance of precipitation after midnight.

Tomorrow snow flurries are expected throughout the day with up to a few inches of accumulation. Temperatures may increase into the high 20F’s and winds are expected to remain light from the East. Much uncertainty exists this weekend for Southcentral, Alaska as cold arctic air impacts interior Alaska and another low pressure moves in from the Gulf. Depending on how these two systems impact our region we could see either very cold temperatures or another round of snow showers by Sunday.