In the periphery zones of Girdwood, Johnson Pass and Summit Lake a shallower snowpack exists and it may be easier to trigger a slab avalanche in these areas.  Check out the Summit Lake Summary  HERE.

This weekend if choosing to travel in avalanche terrain it is important to remember although the snowpack is wind hardened and tired, it does have a poor structure. There are a variety of weak layers (buried surface hoar and facets) in the middle of the pack as well as near the bottom (facets).  The slab on these weak layers is quite variable and hard – and though difficult to trigger, the possibility does exist. Today temperatures in the Alpine will be above freezing due to a strong inversion in our region. Ridgetops may approach 40F today. Luckily radiation from the sun is minimal at this time of year, and surface warming is expected to be subtle. Whenever temperature rise above freezing more uncertainty exists. Should the surface snow show signs of melting today it may be easier to trigger a persistent slab. This structure is most suspect on steep wind loaded slopes (Northern and Eastern) that haven’t avalanched yet. Likely trigger spots are in thinner areas near rocks. Luckily many slopes have avalanche and old debris is still very visible and is a good way to know if a slope has avalanched or not. Watch for areas with hard over soft snow and hollow sounding snow. Avoid cornices, wind pillowed snow in start zones and loaded areas farther down slope (from the strong winds). Obvious signs like cracking and ‘whumpfing’ may not be early warning signs.

Heavier loads, such as multiple snowmachines or people on the slope at one time might tip the balance. Safe travel protocol is your friend. Remember to only expose one person at a time, watch your partners, have an escape route planned, group up in safe zones and pay attention to other groups around you.

In the periphery areas (Girdwood, Johnson/Lynx Creek and Summit Lake) where a thinner snowpack exists, several observers have experienced collapsing/whumpfing recently which indicates the potential for these persistent slab avalanches may be higher. Heighten caution is advised if traveling out of the core Turnagain Pass terrain.

Believe it or not, 3 glide avalanches have occurred last week in the Turnagain Pass zone. The first to release was on the SE aspect of Lynx Creek, followed by the SE aspect of Seattle Creek, and the SW face of Eddies. These released near the end of a 3-day inversion when temperatures in the alpine remained above freezing for multiple days. The problem with glides is that they release without warning and are not associated with human triggers. They have been known to release when temperatures are above freezing, as well as when temperatures suddenly drop. Basically glides are very unpredictable and it is best avoid being direcly below one and limit your time in run-out zones.

A glide avalanche on the SW face of Eddies released sometime between January 3rd and January 4th. Indentify existing cracks, as there are a handful that are opening up in our region. 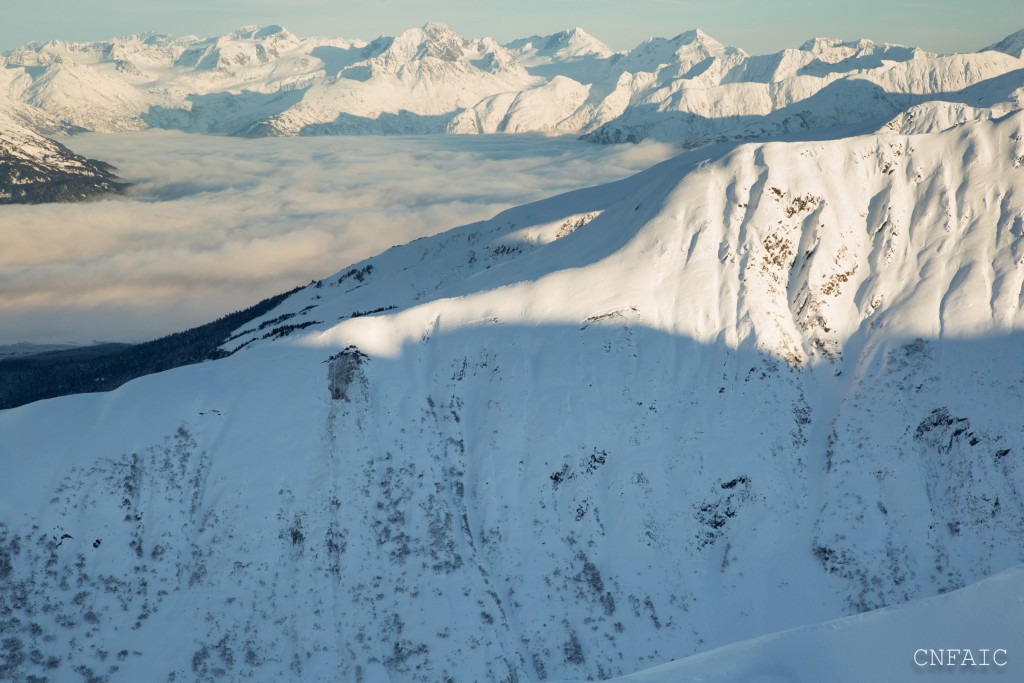 Yesterday was cold and clear! Below 1000′ temperatures averaged around 0F with pockets of -10F in many valley bottoms. An inversion allowed ridgetop temps to slowly rise throughout the day from 5F to 30F by early evening. Skies were clear with light North winds. No precipitation has been recorded since December 29th.

Clear skies and sun is expected again today along with a strong temperatures inversion that will cause valley fog in many areas of Southcentral Alaska. Temperatures could be as low as 5F near valley bottoms and approaching 40F near ridgetops. Northerly winds are forecasted to be light, 5-15mph near ridgetops.

A blocking high pressure is expected to dominate our region into the near and distant future. Expect a similar pattern over the next few days with a strong inversion, light winds, and no precipitation.