In the periphery zones of Girdwood, Johnson Pass and Summit Lake a shallower snowpack exists and it may be easier to trigger a slab avalanche in these areas.

*Its that time of year again, PFD time! If you are feeling generous and want to support your local avalanche center, Pick Click Give, makes it really easy to become a supporting member of CNFAIC.

This weekend if choosing to travel in avalanche terrain it is important to remember although the snowpack is wind hardened and tired, it does have a poor structure. There are a variety of weak layers (buried surface hoar and facets) in the middle of the pack as well as at the bottom (facets). The slab on these weak layers is quite variable and hard – and though difficult to trigger, the possibility does exist. Steep wind loaded slopes (Northern and Eastern) that haven’t avalanched yet are the most suspect. Likely trigger spots are in thinner areas near rocks. Obvious signs like cracking and ‘whumpfing’ are becoming less common, making it more difficult to assess slope stability. Watch for areas with hard over soft snow and hollow sounding snow. Avoid cornices, wind pillowed snow in start zones and loaded areas farther down slope (from the strong winds). Hard slabs may allow you to get well out onto them before breaking. Heavier loads, such as multiple snowmachines or people on the slope at one time might tip the balance. Safe travel protocol is your friend. Remember to only expose one person at a time, watch your partners, have an escape route planned, group up in safe zones and pay attention to other groups around you.

In the periphery areas (Girdwood, Johnson/Lynx Creek and Summit Lake) where a thinner snowpack exists, several observers have experienced collapsing/whumpfing in more recently which indicates the potential for these persistent slab avalanches may be higher. Heighten caution is advised if traveling out of the core Turnagain Pass terrain.

Slab over facets on the North side of Tincan Wednesday. Photo: Heather Thamm 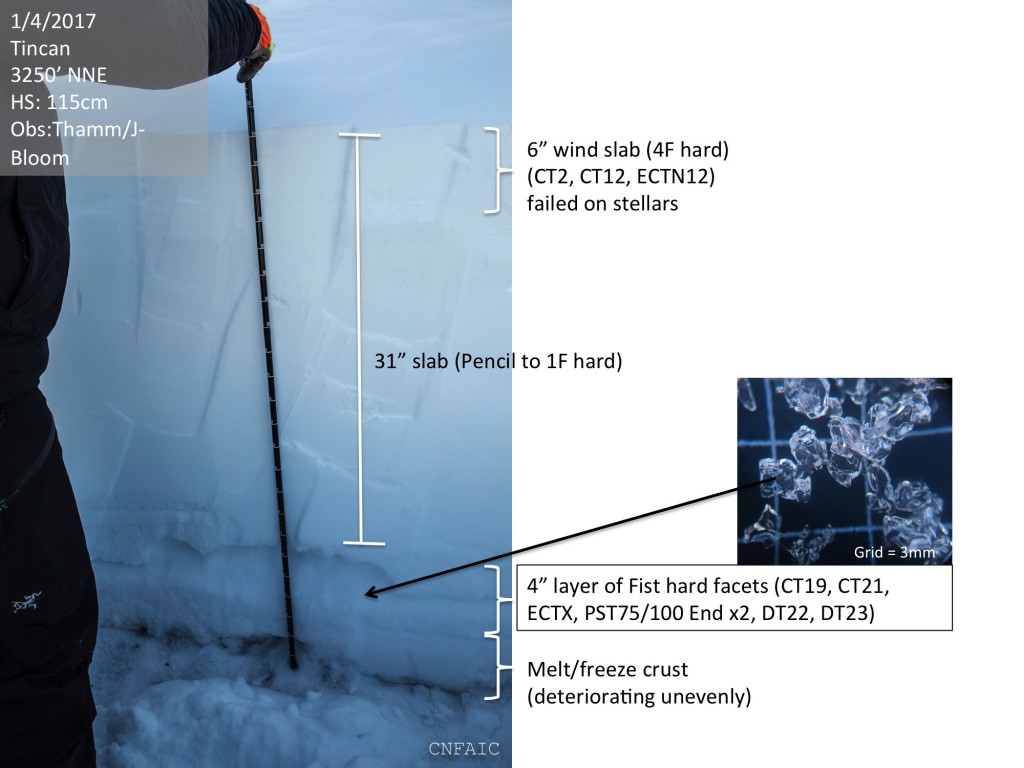 Believe it or not, 3 glide avalanches have occurred in the past week in the Turnagain Pass zone. These are SE aspect of Lynx Creek, SE aspect of Seattle Creek, and the SW face of Eddies. Along with recognizing wind affected snow, keep an eye out for glide cracks and limit time under these.

Yesterday was clear, sunny and cold. Temperatures were in the teens along ridge tops and single digits in the valleys. Winds were light and Northerly. Overnight temperatures were near 0F and below, skies were clear and winds remained light.

Today, tonight and tomorrow will be similar as blocking pattern (Omega block) dominates the weather in Southcentral Alaska into next weekend. Daytime temperatures will be slightly warmer in the teens-20Fs and dip back down to single digits at night. N winds will be mostly light with some gusts into the 20s. Skies will be mostly clear.