There is a MODERATE avalanche danger in the mountains surrounding Turnagain Pass on all slopes above 1,000′ where winds have affected the snow. Triggering a wind slab avalanche on slopes steeper than 35 degrees will be possible. These slabs are hard and sitting on a variety of weak layers. They also have the potential to be triggering from below or when you are well onto them.

Summit Lake area on the Kenai:  Heightened avalanche conditions exist – Please see Heather’s Snowpack Summary from yesterday if you are considering this zone.

JOHNSON PASS REGION:   This area has a thinner and potentially more dangerous snowpack in open areas where Friday’s winds wreaked havoc. Triggering a slab avalanche is possible on steep slopes loaded by winds – these could be pulled down from below and occur on small steep slopes as well. We are in need of information from this zone (Bottomless snow in the alders? Hard wind slab above the trees? Any avalanche activity?) – please considering submitting an observation if you head this way!!

Happy 2017 from the entire Chugach National Forest Avalanche Center crew!!!  The Center has come a long way from its humble roots as a phone line and basic website in 2002 to what it is today.  Our successes are a direct result of an amazing community of  skiers, snowmachiners, snowboarders and businesses  that support avalanche safety.  Furthermore, we owe much of our success and sustainability to the Board members that make up our Friends group, past and present.  Wishing everyone a safe, successful and happy New Year!

The word on the street is Friday’s wind event…. Very strong winds from the West and South did a number to the snow surface, the snowpack and triggered numerous natural wind slab avalanches. Certain areas are stripped to the ground while others have sastrugi and rock hard wind drifts 2-3′ thick. In general, many slopes sport a variety of 4-8″ supportable wind slabs, thinner breakable wind crusts and even some soft snow in between. Don’t get too down though, there are zones that managed to survive and harbor soft settled snow, but folks seem a bit reluctant to give up the coordinates. The clear (but warm) weather forecast for the next week may start eating away at the hard surfaces and riding conditions could improve.  (Check out what folks reported yesterday HERE.)

What to keep in mind and watch for:

It may be a busy New Year’s Day – remember safe travel protocols: 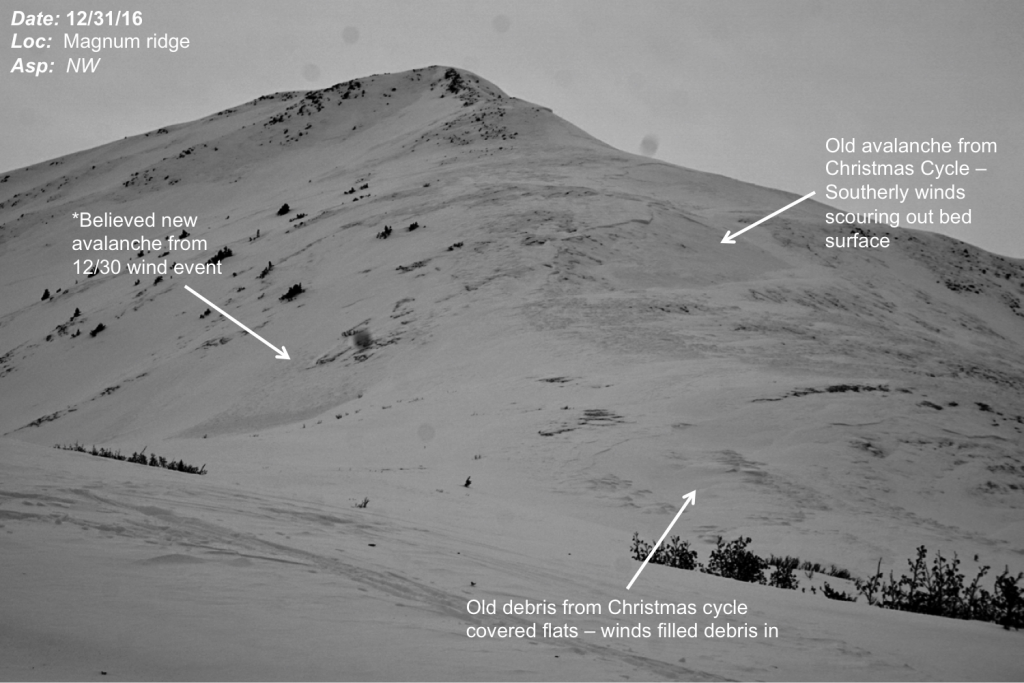 Large natural wind slab avalanche from Friday on the Northerly aspect of Magnum (back along ridge toward Taylor Pass). Crown mostly filled in, debris ran up other side of creek bed near common up-track to Taylor Pass. 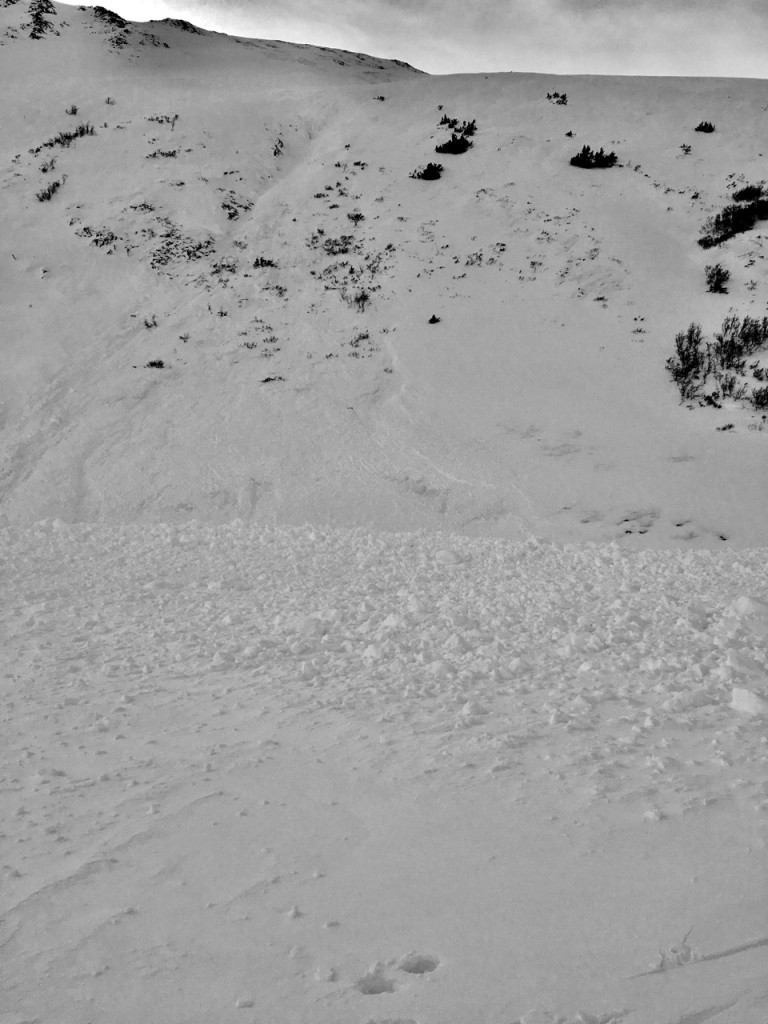 Illustrating the complex nature of our snowpack and multiple weak layers:  The Alaska Avlanche School Level 1 course had a CT (compression test) that resulted in three weak layers failing simultaneously on the 21st tap! This is a rare test result (top 2 layers were buried surface hoar and bottom layer was basal facets) Details HERE. 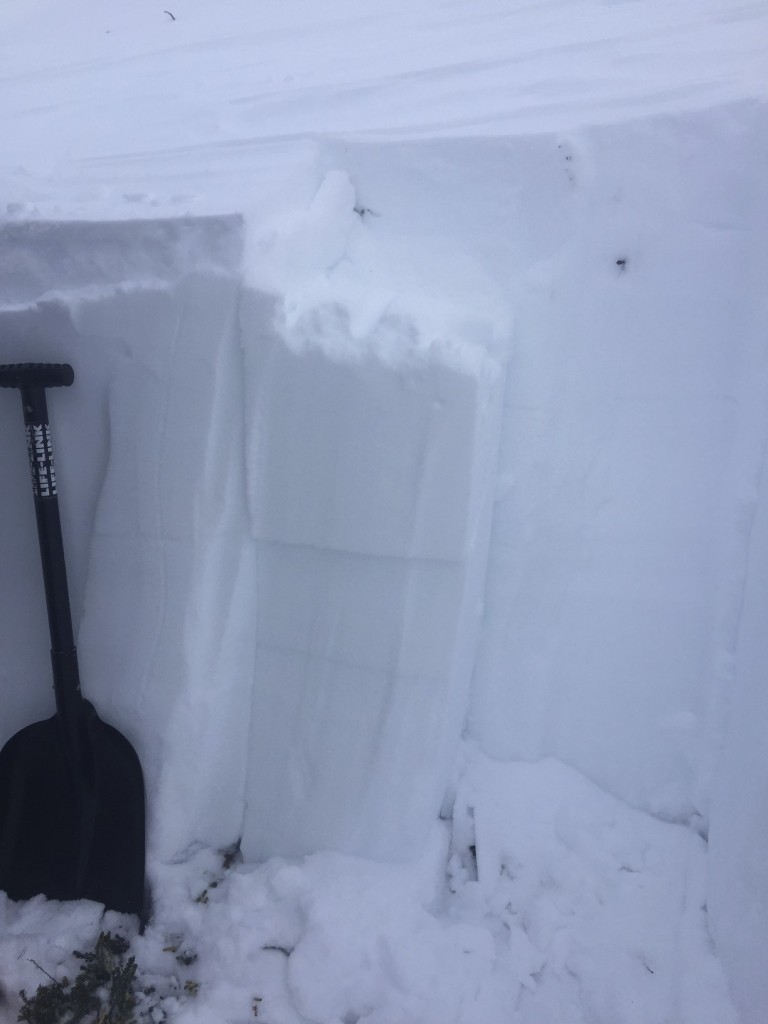 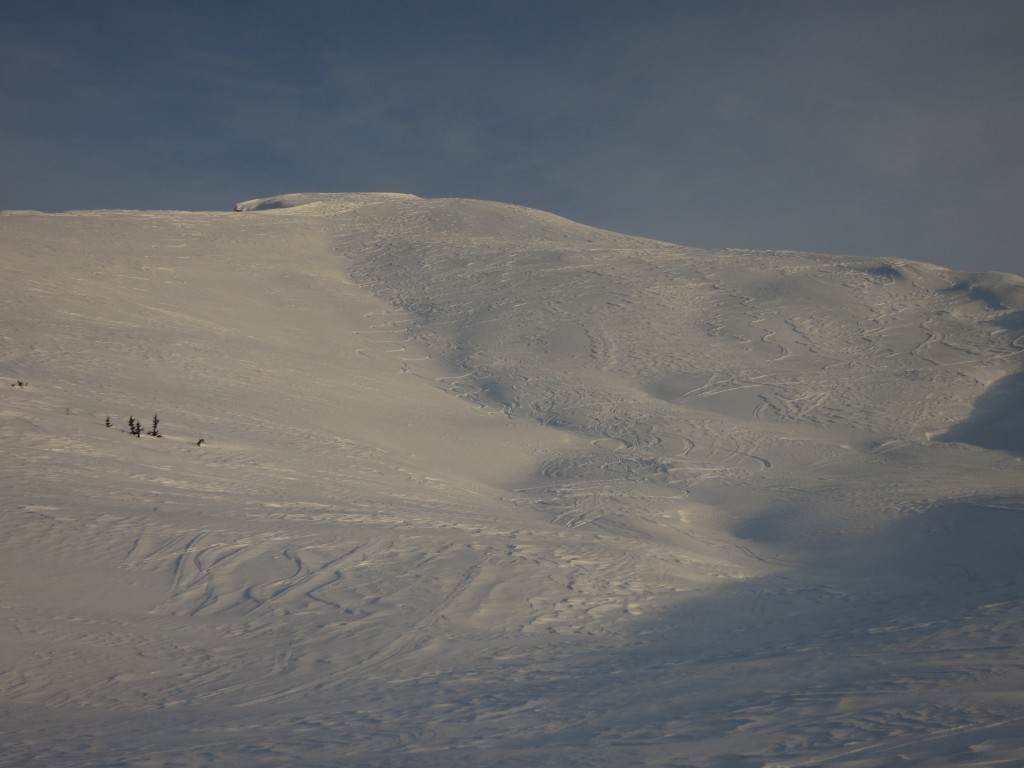 Watch for cornices in unusual places from the Dec 30 wind event. Though these may seem rock hard and welded into place, it’s good practice to always give them a wide berth – we do have warm, sunny weather on tap and this can help to weaken them. 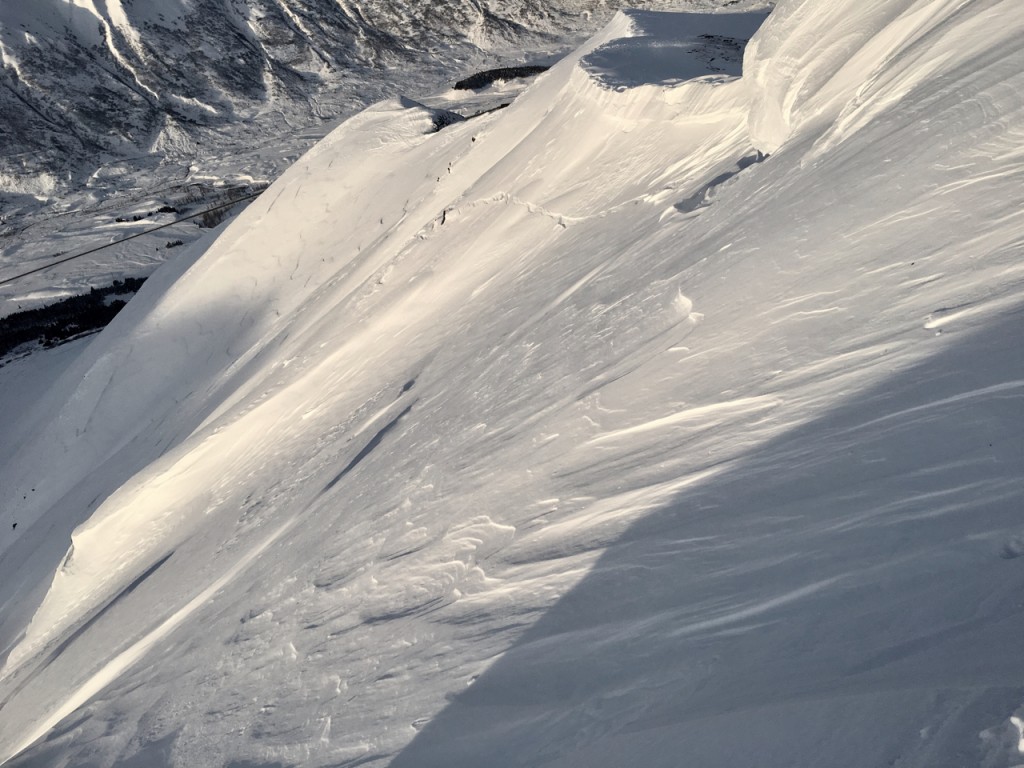 Mostly overcast skies filled the area yesterday. Ridgetop winds were light from the South and West. Temperatures were in the upper 20’s F on the ridgelines and lower 20’s F in the parking lots.

Today, we should see sunny skies with WARM and breezy conditions. A very warm air mass is over us associated with a “Blocking High Pressure”. Temperatures will be near 32F on the ridgelines and in valley bottoms a bit cooler, in the 20’s F. Ridgetop winds are slated for 5-15mph from the South and West.

The high pressure in place looks to remain through the week. From the NWS: “there is high confidence in a prolonged dry spell over Southcentral Alaska and Kodiak Island, on the order of 7 days or longer”. Yes, not anything snow lovers want to hear.  The next chance for snow does not show up in the longer range model runs, yet – fingers crossed!

*The new year is creating a glitch in some weather stations reporting after 11pm.