A  CONSIDERABLE  avalanche danger exists in the mountains surrounding Turnagain Pass and Girdwood Valley  on all slopes out of the trees. Human triggered wind slabs are likely on leeward and cross loaded slopes. It will also be possible to trigger a slab 2-3′ thick on older buried weak layers.

In sheltered areas a  MODERATE  danger exists where triggering a slab avalanche 1-3′ thick that breaks in older snow, remains possible.

A  LOW  avalanche danger exists below 1000′ and triggering an avalanche is unlikely.

Johnson Pass region: A shallower snowpack exists in the mountains South of Turnagain Pass. We have limited snowpack information for this area  – if you are headed this way, a  conservative mindset is recommended  along with easing into terrain. Triggering a slab avalanche is possible and could be triggered from below.

Please check the Summit Lake Summary HERE. There was a natural wind slab avalanche cycle yesterday in that area.

Don’t let the sunshine and holiday weekend lure you into making poor decisions. The snowpack is complicated and cautious route finding is recommended! Pay attention to other groups and practice safe travel protocols.

Yesterday wind plumes and moving snow were seen throughout the day. There was a solid 12 hr period of wind speeds 30 mph and above. Seattle Ridge reached a peak gust of 75 mph at 6pm last night. The NW winds again were channeled due to terrain, loading or stripping a variety of aspects.  As noted yesterday the flow direction is known to load Easterly slopes on Seattle Ridge, such as Repeat Offender. On the East side of Turnagain Pass, this flow often loads Northerly slopes on ridgelines such as Tincan, Sunburst and Magnum as it blows from the south through Turnagain Pass. Yesterday there was limited natural avalanche activity in the core area of Turnagain Pass with a few new wind slabs being observed in Cornbiscuit and Zero Bowl. There were also two small snowmachine triggered wind slabs as well. Observers reported cracking and slab conditions well below treeline.

Today wind slabs are likely to be triggered in leeward or cross loaded areas. Due to the strong winds look for pillowing farther down slope and avoid hollow sounding snow. Wind loaded slopes will be suspect and triggering a slab will be more likely in thinner areas of the snowpack near rocks or where the snow transitions from a ridge to a steeper slope. Wind slabs have the potential to allow you out onto them before they break. Look for cracking and keep in mind that wind loaded slopes could overload buried weak layers and a wind slab avalanche could ‘step-down’, triggering a larger slab avalanche.

Summit Lake saw a wide-spread wind slab natural avalanche cycle yesterday. Areas south on Turnagain Pass such as Petes N and S as well as Johnson and Lynx may be similiar and more sensitive today due to a shallower snowpack. 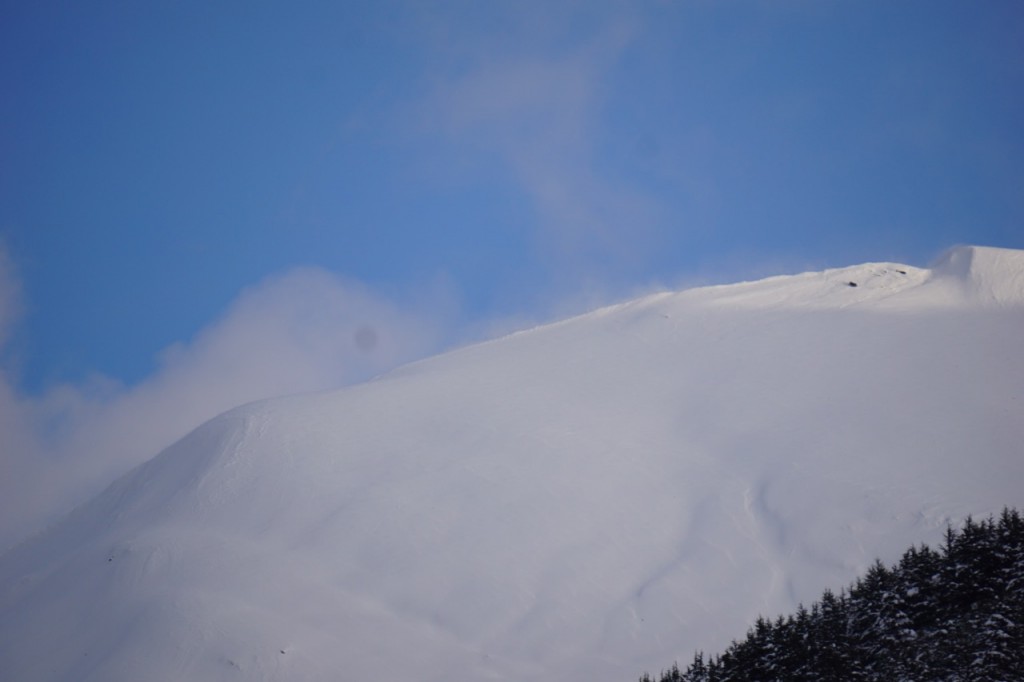 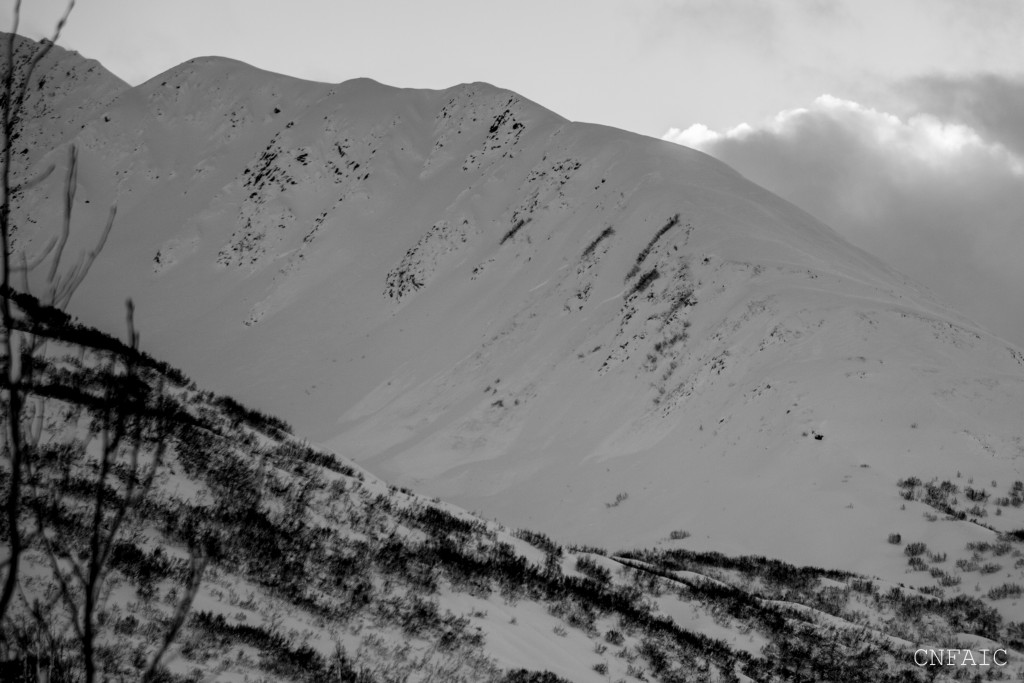 The snowpack in the advisory area is complex. Most terrain harbors weak snow under a slab from the past two weekend storms. Winds have moved snow around in open areas and snowpack depths are variable. The weak layers under the slabs are notorious for creating dangerous avalanches conditions for extended periods of time after storms end.  Both buried surface hoar and facets are present. There are areas adjacent to those that slid during last weekend’s storm that may still have the potential to go today. It is important to remember thinner areas are often the place that old weak layers are initiated. It may be harder to initiate but the slides could be large and deadly. Avalanches may run to the ground. The Lipps skier triggered slide that occurred Thursday afternoon was a persistent slab that broke in weak faceted snow 1-2′ below the surface.

Today it is important to pay attention to:

As you choose terrain to ride or ski today, think about how large and connected it might be. It may not be the 1st snowmachine rider or skier onto the slope that triggers it. Triggering a deeper persistent slab is possible and winds from yesterday may have added stress/load. 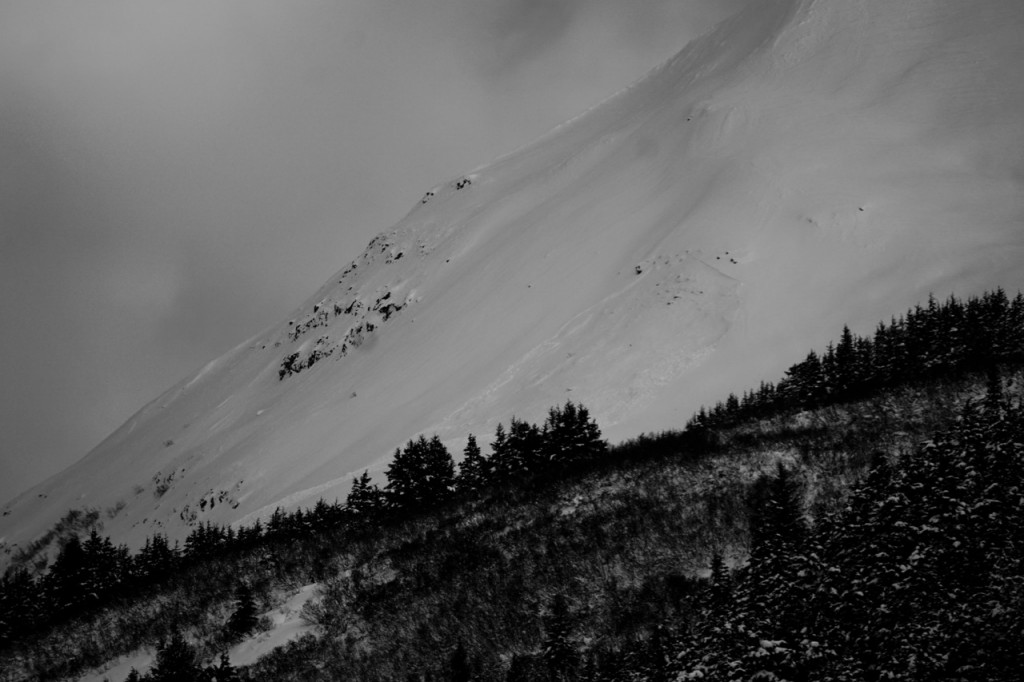 Expect cornices to be sensitive and easy to break off. They also could trigger a slab avalanche below. Be extra cautious near ridgelines today where cornices can be challenging to navigate.  If you suspect a corniced ridge give these a wide berth and be aware of people below you. Due to the unsusal wind loading yesterday look for new cornices or unsual loading patterns.

Wind was the main event yesterday with steady NW winds blowing 30 mph and gusting to 75. These were more southerly depending where you were on Turnagain Pass. Terrain effect on the winds was highly variable. Temperatures were in the 20Fs and skies were broken. Overnight N winds were 15-25 gusting into the 30s. Temperatures were in the mid 20Fs and skies were mostly clear.

Today will be mostly sunny with temperatures in the 20Fs and light N-W winds. Tonight will be partly cloudy with cooler overnight temperatures dipping into the teens and light SW winds.

Tomorrow (2017) and into the week should be clear and slightly cooler due a “strong blocking ridge” creating a “prolonged period of dry weather over Southcentral Alaska.”