There is a CONSIDERABLE avalanche danger above treeline surrounding Turnagain Pass, Girdwood Valley and Summit Lake on the Kenai. A 1-2′ slab is sitting on weak unstable snow where human triggered avalanches are likely on steep slopes in the alpine, above 2000′. Careful snowpack evaluation, cautious route finding and conservative decision-making are essential in all areas above the trees today.

A MODERATE avalanche danger remains in the trees and lower elevations where triggering fast moving sluff or a 12 € slab is possible on steep terrain features. Remember to avoid terrain traps where an avalanche of any size could have high consiqences.

Join CNFAIC Forecaster Aleph Johnston-Bloom for a discussion on the Turnagain Pass snowpack  TONIGHT at Blue and Gold Boardshop in Anchorage from 7pm-8:30pm.  Learn about  how this season’s snowpack has developed and what can we expect for the holidays.

***Carter Lake and Snug Harbor areas are open to motorized use starting today, Tuesday Dec. 20th. Please respect other closures across the Forest. The Forest Service is monitoring conditions daily and will open more areas just as soon as there is enough snow to prevent resource damage to underlying vegetation. Thanks for your patience!

OUTSIDE AREAS: Recent snowfall has created dangerous avalanche conditions around Southcentral and Interior, Alaska. Keep this in mind if you are headed to Snug Harbor and Carter today and please send in an observation if you see any obvious signs of instability. Check out these avalanche observations from Hatcher Pass and Petersville  region  where recent avalanche activity was observed over the weekend.

A touchy snowpack was observed over the weekend as 12”-14” of new snow fell incrementally over a four-day period in Girdwood, Turnagain Pass and Summit Lake. This new snow arrived with moderate to strong Easterly ridgetop winds, which have redistributed the snow above treeline creating varying slab depths 1-2 feet thick. Several weak layers are sitting below this slab and are suspect right now in the alpine. A widespread layer of weak faceted snow remains our primary layer of concern and was the culprit in many skier triggered avalanches over the weekend. Yesterday an observation from Sunburst showed propagation potential on a layer of buried surface hoar (buried Dec.15th) which is sitting on a wind hardened bed surface along some ridgelines.

Approach your day with a cautious mind-set and be skeptical of all avalanche terrain (slopes steeper than 30 degrees) in the upper elevations. Obvious signs like cracking, wumpfing sounds, or recent avalanche activity are an immediate sign that the snow is unstable. However you may not see these signs until its too late, so remember our current poor snowpack structure is considered guilty until proven innocent. If you find yourself being tempted into bigger terrain this week keep your consiquences in mind:

A handful of human triggered avalanches occured mid-storm on Sunday 12-18 on Tincan and Eddies. Slab depths are now thicker (12-20″) since the storm subsided and triggering this layer will take more force and could break unexpectedly once onto the slope. 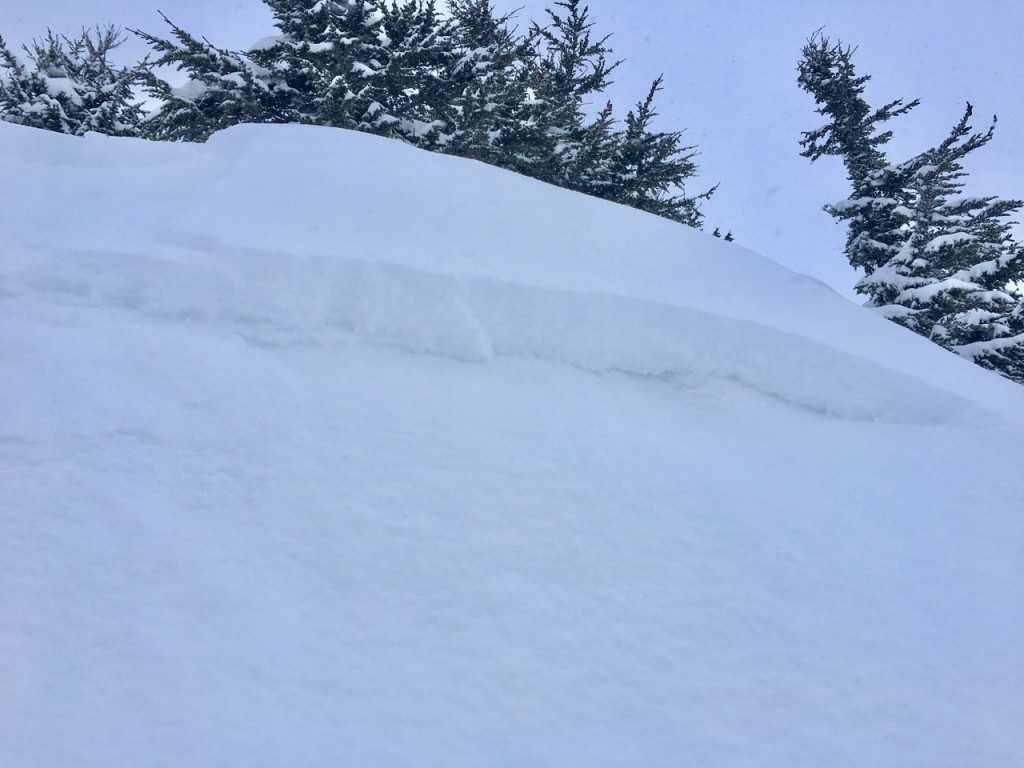 If headed to Summit Lake on the Kenai natural avalanche activity and skier triggered avalanches were observed over the weekend. Check out this observation from Tenderfoot where touchy wind slabs are sitting on a very thin and weak foundation. Photo of Butch Mountain (SW aspect) taken on Dec.17 by Mike Ausman. 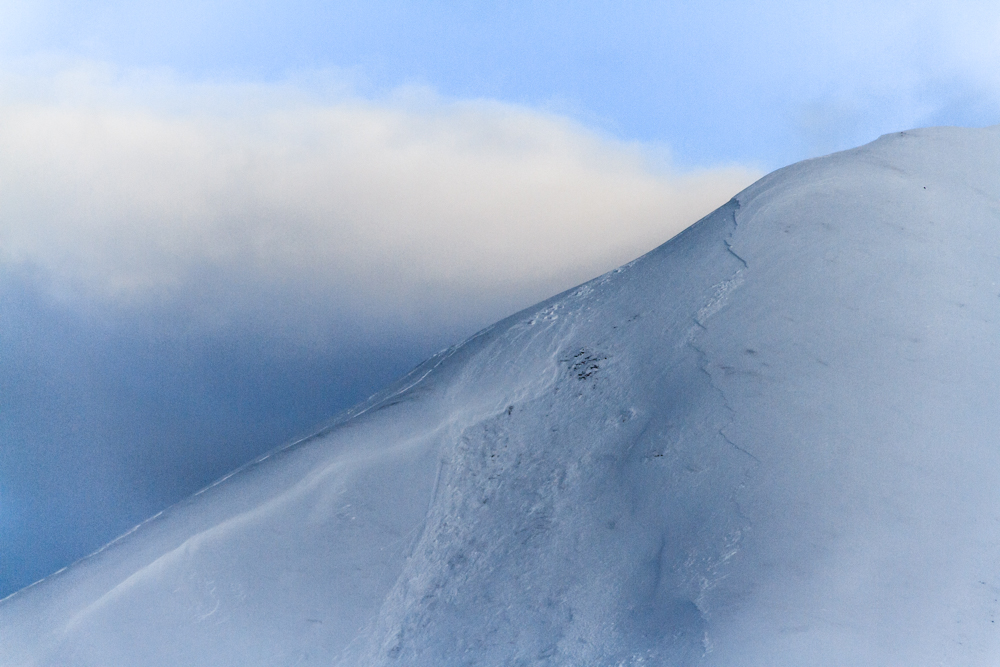 Expect cornices to be sensitive and easy to break off. They are also likely to trigger a slab avalanche below. If you choose to walk a ridgeline today, give these a wide berth and be aware of people below you

“Sluff” may be fast moving on steep terrain features where the snow is loose and unconsolidated like in the trees. Be aware of terrain features that could have high consequence if knocked off your feet.

Snow showers yesterday brought 1-2 € of new snow throughout the day. Easterly winds were light and temperatures averaged in the low to mid 20Fs. Overnight temperature dropped into the teens and winds were calm.

Today expect mostly cloudy skies and scattered snow showers. A chance of 1-3 € of snow is possible. Winds are expected to be light and temperatures in the mid to low 20F’s.

A clearing trend is in the forecast for the next few days bringing cooler temperatures (teens and single digits F) and the possibility of gap winds for the Eastern Kenai Mountains.