A MODERATE avalanche danger exists in the mountains surrounding Turnagain Pass at all elevations above 2,000′ and on all aspects. Wind slab avalanches around a foot thick will be possible to trigger on slopes loaded by the new snow from Wednesday night. Larger slab avalanches are also possible in areas less traveled where a weak layer remains in the snowpack 2-3′ deep. Safe travel protocol will be essential today and into the weekend.

***Observations from the Summit Lake area on the Kenai are showing a similar snowpack. Weekly summaries will begin tomorrow morning.

A fast hitting and very interesting storm rolled through Wednesday night and into Thursday morning. We were excited to find 12″ of storm snow in the Seattle Ridge parking lot yesterday, but disappointment set in as only 6-8″ was found at the higher elevations. This seemed to be the case with the other ridgelines. In the end, this storm looks to have been a bit more blow than snow. That said, lingering wind slab avalanches are our primary concern today.

WIND SLABS:  If you are headed out, watch for both older slabs from Wednesday’s storm and fresh slabs if the cold North winds bump up enough to move snow around. Most concerning is that wind slabs could be sitting on the Nov 16 layer of buried surface hoar. If this is the case, a ‘typical’ wind slab avalanche could step down and trigger a much larger slide releasing 2-3′ deep. Keep in mind, these could pop out mid-slope as the Todd’s Bowl image below illustrates. Pay attention to how the snow feels underfoot. Is it stiff? Does it feel upside down i.e. hard over soft? Do you see shooting cracks? Does it feel or sound hollow? Look for recent cornices, wind pillows and drifts. Is a slope cross-loaded or top-loaded?

Photo below: Natural avalanches in Todd’s Bowl during the tail end of Wednesday night’s storm. It is suspect that buried surface hoar was the weak layer in the two avalanches where the crowns can be seen mid-slope. 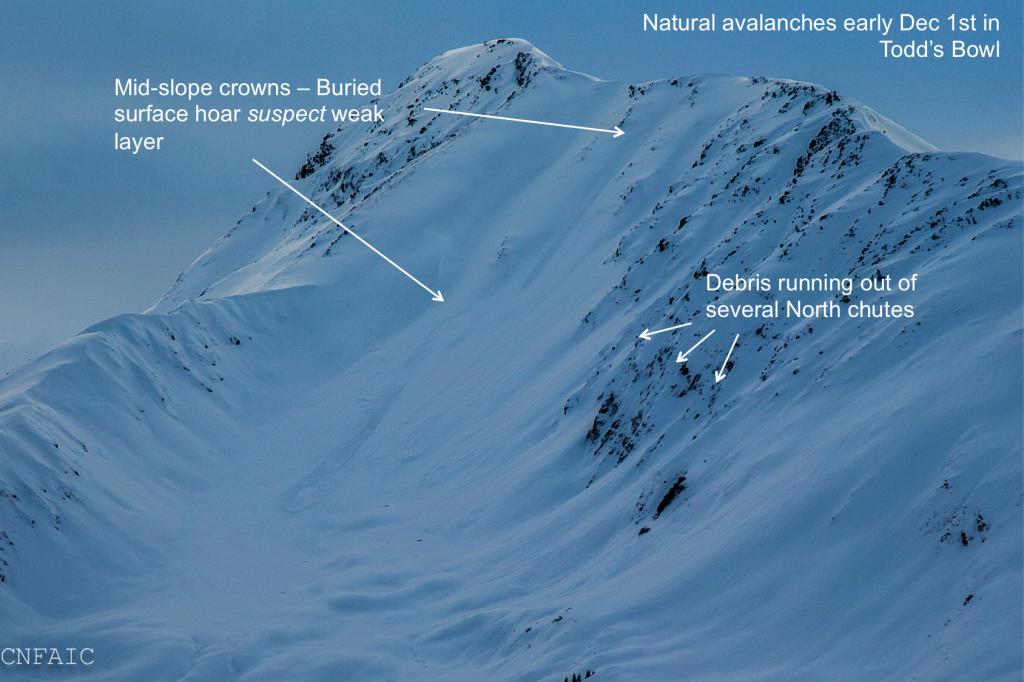 A layer of buried surface hoar, 1-3′ deep, still remains on many slopes at Turnagain Pass and in the Summit Lake area. During the past two weeks, many popular slopes have avalanched (removing the weak layer), been covered again by snow and folks are skiing and riding them without incident. The trick is: figuring out where it has not avalanched and could it still? Questions to ask as we move into a weekend of clear-ish skies. Safe travel protocol is your best bet out there in case one of these deeper slides occurs.

It’s been roughly a week since we have seen or heard of a glide crack releasing – but the cracks continue to widen despite the cold weather. Once again, limiting your exposure under these is highly recommended.

Partly cloudy skies aloft with valley fog below filled the region yesterday. No precipitation fell during the day. Winds were light from the Southeast. Temperatures were in the mid 20’s F at all elevations with a spike to 30F at 2,000′ mid-day.

Overnight, an inch of snow fell in Girdwood Valley and Turnagain Pass with light easterly ridgetop winds. Today, continued flurries could pile up another inch. Ridgetop winds will shift to the North this morning and increase to 15-25 mph while ushering in a very cold air mass. Temperatures should drop today from ~25F to 10F on the ridgelines.

Tomorrow and through the weekend, the cold North flow will remain in place bringing partly sunny skies, cold Northerly winds and little chance for precipitation.