The avalanche danger is  MODERATE  in both the alpine and at treeline on all aspects due to a widespread layer of buried surface hoar. Human triggered slab avalanches 1-2 feet thick are possible today and will have higher consiquences on larger slopes. Also triggering an isolated windslab up to 6″ thick is possible on steep features near ridgetops. Be extra cautious choosing your route and don’t hang out under glide cracks.

Over the last week the alarms have sounded due to a widespread layer of buried surface hoar sitting below 1-2 feet of snow. Observers continue to find this layer on all aspects and elevations throughout Turnagain Pass. Up until a few days ago human triggered and remote triggered avalanches were happening daily with a couple dozen avalanches reported over a 7-day period. These avalanches have been small to medium in size; just large enough to bury a person or seriously injure you in a ride. With time this layer has been adjusting to its load and becoming less reactive and harder to trigger.  Last nights snowfall, about 4 inches, arrived after winds calmed down and was just enough to cover up recent avalanche activity. Don’t forget buried surface hoar is a persistent weak layer and human triggered avalanche are still possible. This layer has not gone away and should be a major factor in slope choice today. Larger and/or steeper, more wind-loaded slopes that haven’t been ridden still have the potential to avalanche and could fracture once well onto the slope. Be aware of the consequences below you and keep an eye out for recent wind loading, shooting cracks and whumphing sounds.  Practice safe travel techniques like regrouping in safe zones and only expose one person at a time in avalanche terrain. This can be challanging to practice in crowded areas, thus be extra aware of other groups who may be traveling above or below you.

A view of avalanche activity on the popular Sunburst SW face. Photo taken Novemeber 24th before new snow from last night covered it up. 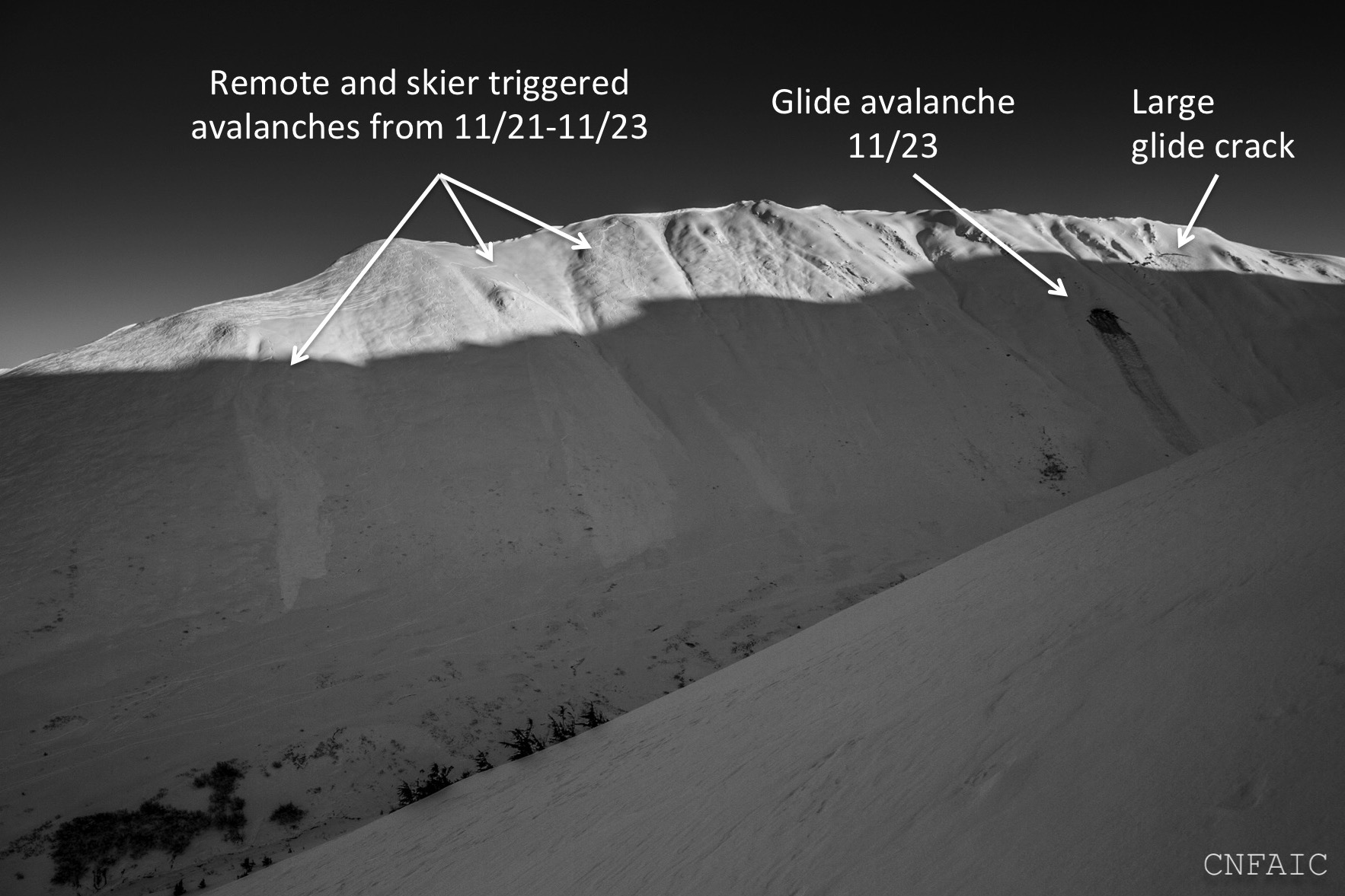 Yesterday numerous shooting cracks were observed near Taylor Pass and Sunburst Weather Station, where moderate winds were activily loading Western aspects. Triggering a small wind slab up to 6” thick is possible in steep leeward terrain near ridgetops. Be aware of supportable and hollow sounding snow hidden below the four inches of new snow that fell overnight. Avoid steep slopes if you experience shooting cracks. 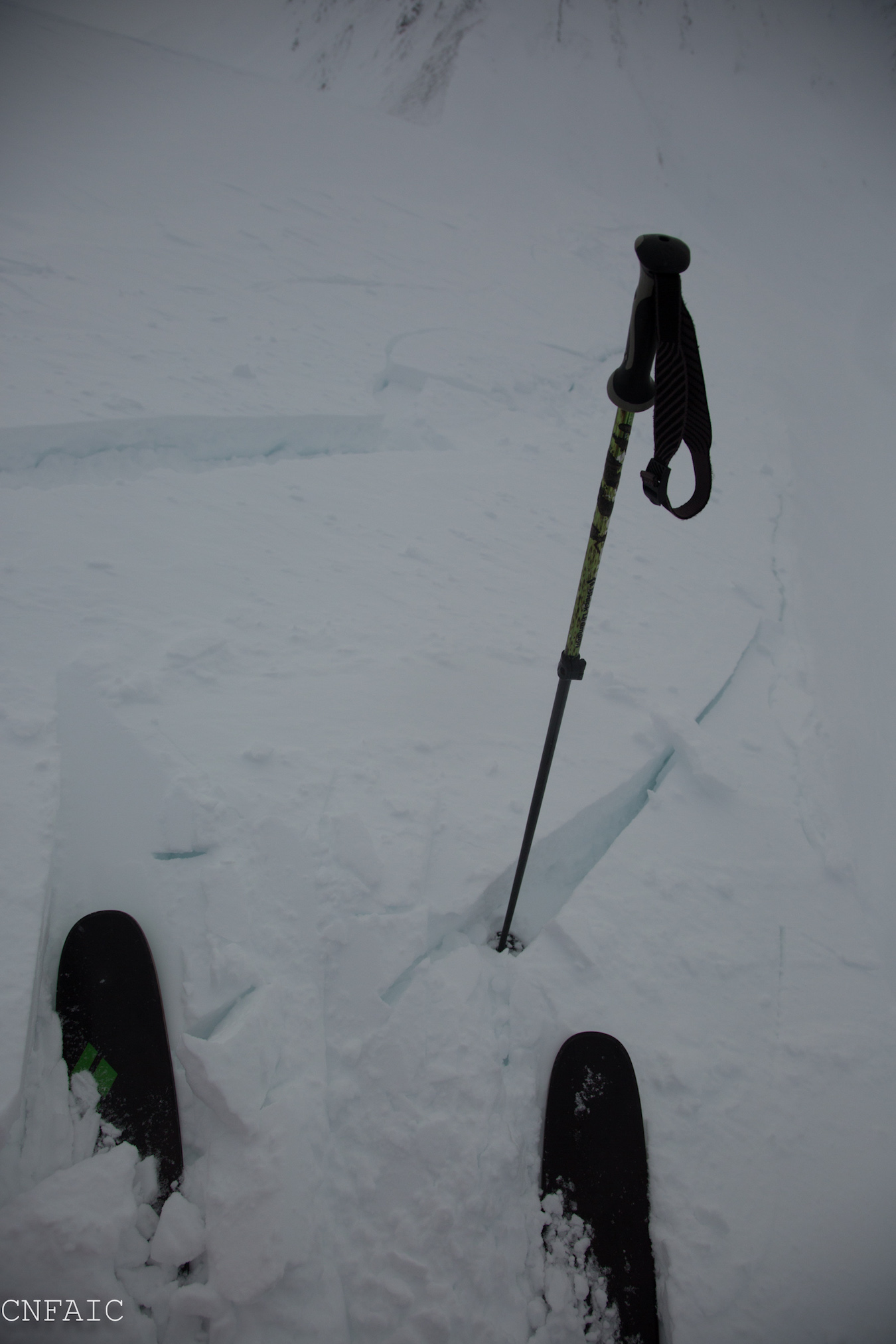 Several glide avalanches have released this week including one observed yesterday morning on the West face of Pyramid. Several glide cracks have been noted in popular terrain like Tincan’s Common bowl and the SW face of Sunburst. If you see glide cracks give these a wide berth, minimize time spent underneath, and remember these are totally unpredictable. They are not triggered by humans and are the entire snowpack releasing.

Yesterday morning about an inch of new snow dusted Turnagain Pass and a trace was noted in Girdwood. Skies were overcast becoming obscured in the afternoon.   Easterly ridgetop winds were moderate (15-25mph) becoming light by the evening. Temperatures were on the rise all day, teens F to mid 20F’s.

Overnight 4 inches of new snow fell in Turnagain Pass and only an inch in Girdwood. Temperatures remained just below freezing and winds were light from the Northeast.

There is a chance for a few more inches of snow today. Ridgetop winds are expected to remain light and variable and temperatures should be in the mid 20F’s.

Cooler temperatures and clear skies are expected tomorrow evening through Wednesday with another chance for snow near the end of the week.

***Sunburst Weather Station has not recording weather data since Nov.25th. We are currently assessing and hope to get it repaired soon.