The avalanche danger remains CONSIDERABLE in the alpine on all aspects due to a widespread layer of buried surface hoar. Human triggered slab avalanches 10-20 € thick are likely and may release on lower angled slopes. Be extra aware of changing weather conditions and any additional stress being added to the snowpack today.

A MODERATE avalanche danger exists at treeline where human triggered avalanches are possible on open slopes, or debris running from an avalanche above may occur. Extra caution and safe travel protocol is advised if venturing in the backcountry.  Avoid travel underneath glide cracks.

A widespread layer of surface hoar (formed November 15th/16th) is buried below 10-20” of snow throughout Turnagain Pass on all aspects. If you’ve been reading the advisory all week, you already know that this weak-layer/slab combo has been extremely reactive. Dozens of human triggered and remote triggered avalanches have occurred since November 17th on the popular slopes of Tincan, Sunburst, and Magnum. These avalanches have been on the edge of small to medium in size; just large large enough to bury a person or seriously injure you in a ride.

This is important to keep in mind today and throughout the weekend with more snow heading our way. Today we could see an additional 2-6 inches of new snow and more coming this weekend. The snowpack is still unstable and an additional load will only make the consequences even larger. Maintain a conservative mindset when choosing your route and keep your slope angles gentle. Be on the lookout for obvious signs of instability like blowing snow, shooting cracks and whumphing sounds. Remember larger slopes can produce bigger avalanches. With the holiday weekend ahead there could be more people heading into the backcountry. Be extra aware of other groups above and below you and only expose one person on a slope at a time.

*Yesterday was the first day out of 7 days we haven’t received any reports of human triggered slab avalanches in Turnagain Pass. With time this layer of buried surface hoar is becoming more stubborn, but this also means the slab has the potential to fracture once well onto the slope. This was exactly the case on Wednesday (November 23rd) when two skiers triggered two avalanches on a slope that had been skied multiple times on Sunburst’s Southwest face. One of the skiers reported that both slides broke above them and were “nearly impossible to escape from.”

Sunburst Southwest face. The avalanche on the left was remotely triggered on Tuesday, November 22nd. The avalanche near the ridge occured on November 23rd after the slope had been skied several times. 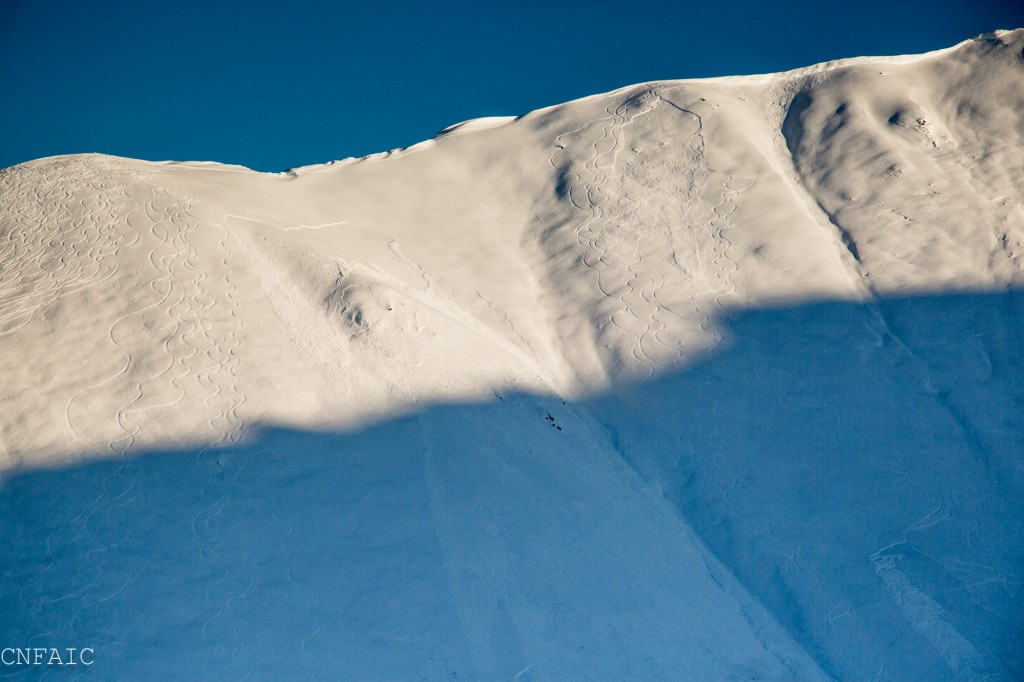 There were two glide avalanches reported on November 23rd and other glide cracks have been observed around Turnagain and Summit area. If you see a glide crack give these a wide berth, minimize time spent underneath, and remember these are totally unpredicatable. They are not triggered by humans and are the entire snowpack releasing.

A glide avalanche on Sunburst SW face that released on Wednesday November 23rd. The crack on the right continues to open and widen. 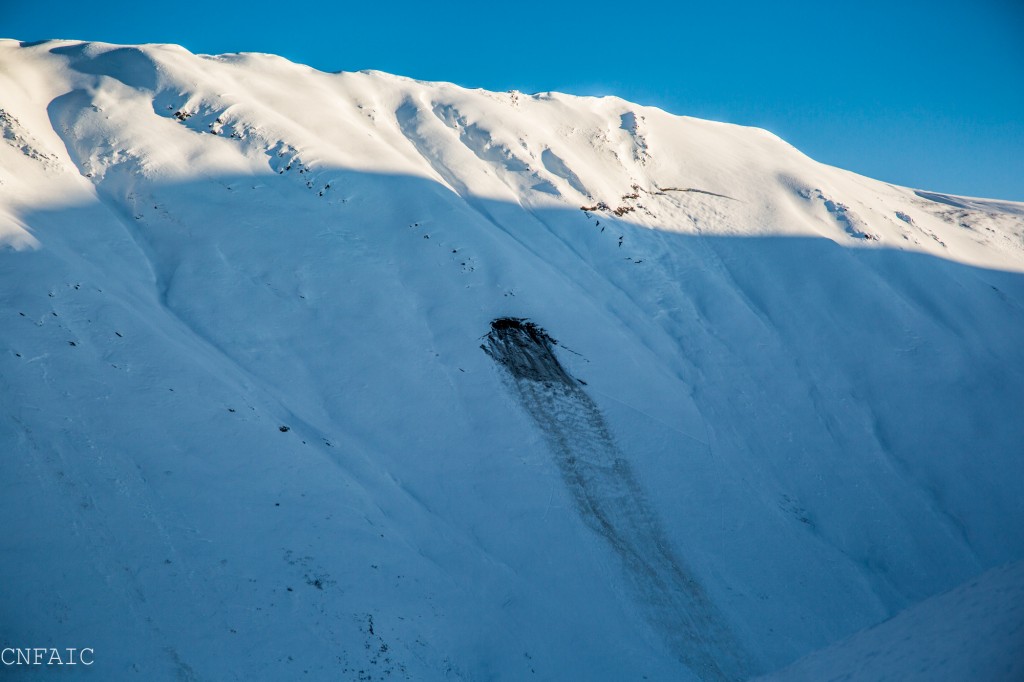 Yesterday skies were clear and no precipitation occurred. A temperature inversion kept cooler air (10-15 F) and some fog in the valley floor and ridgetop temps were in the 20’s F.  Northwest ridgetop winds were moderate (15-30mph) in the morning deminishing by noon to light Northeast winds.

Overnight Southeast ridgetop winds increased into the 20’s mph and temperatures have been on a steady rise into the 20’s F. Light snowfall started as of 6am at Turnagain Pass.

Today 2-6 inches of new snow may fall the upper elevations. Temperatures are anticipated to remain just below freezing at 1000′ and ridgetop winds are expected to be light from the North. This is the beginning of a several storms tracking through Southcentral Alaska in the next few days.  Saturday evening into Sunday expect heavier snowfall and stronger winds.