The avalanche danger is MODERATE below 3000′ in Turnagain Pass where glide cracks continue to avalanche without warming. Identify areas with existing glide cracks and avoid being under or near their run-out.

In the Alpine the avalanche danger is LOW, where triggering an avalanche today is unlikely, but taking a fall in steep terrain will be difficult to self arrest. This is a great example of how LOW DANGER DOESN’T MEAN NO DANGER.

The glide cycle continues throughout our region leaving large streaks of dirt and debris behind. Dozens of glides have released throughout Turnagain Pass and hundreds of large cracks continue to creep open and move. Without new snow to cover up old glides it is getting difficult to track new activity.

Two nights of below freezing temperatures have helped to temporarily stabilize the snow in places without glide cracks. It is important to understand that superficial freezing has added strength to the surface, but the snow below is still moist and poorly bonded. Glides can release even with superficial cooling, as observed yesterday on Seattle Ridge. See photo below.

The entire East face of Seattle Ridge is covered with cracks including the most of Repeat Offender, which has seen accelerated activity this week. The area near the ‘uptrack’ is getting more cramped, and navigating through the mid-elevation band is getting more and more complex. As long as glide cracks continue to release we will continue to stress the importance of avoiding this hazard! 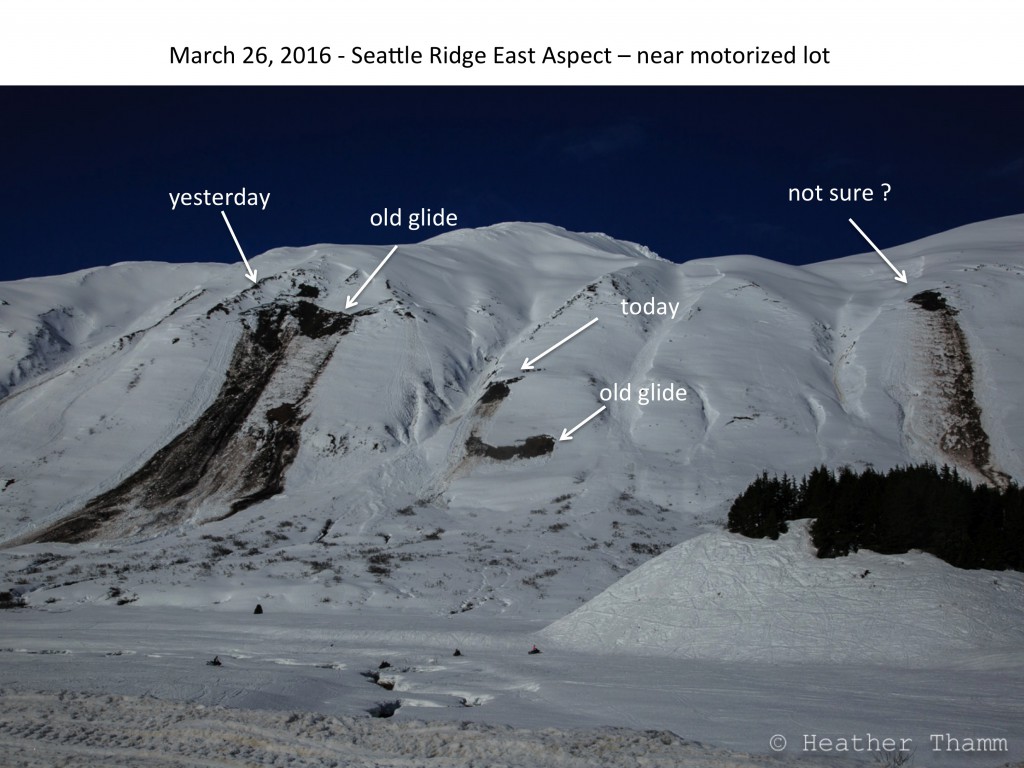 A lot of recent glide activity on Center Ridge and Tincan Ridge and many glides that haven’t yet released. 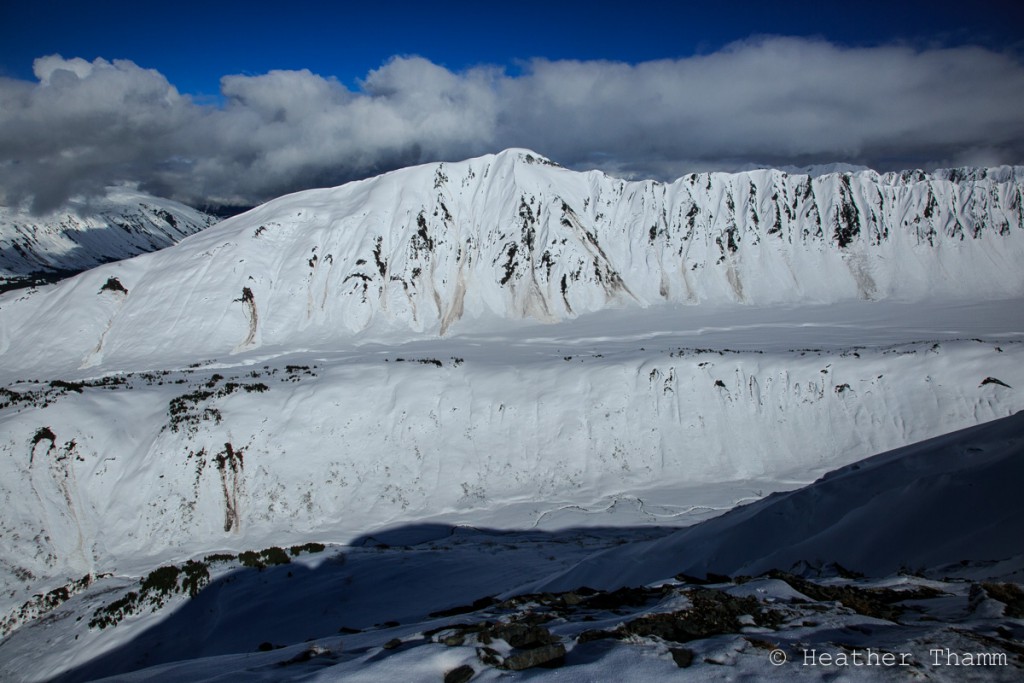 Below freezing temperatures have formed a firm surface crust in the mid and upper elevations. This crust has added strength to the snowpack following unusually warm weather last week. The good news is that the avalanche hazard is low in the upper elevations, the bad news is it come with a different hazard to manage. Slide for life conditions do exist in steep terrain where it will be unlikely to trigger and avalanche, but easy to lose an edge. It is still necessary to consider the consequences of taking a fall in the terrain you are both ascending and descending.

*Cornices remain extremely large and perched along many ridgelines. These features deserve extra space and can break farther back than expected. Triggering a cornice will become more likely later in the day with warming temperatures. Trigger a cornice above steep terrain could mean going for a long ride.

Two people on Tincan Ridge above a large cornice. These features are very difficult to judge and this is a great example of how important it is to space out and only expose one person at a time. Photo by Ryan Lewthwaite. 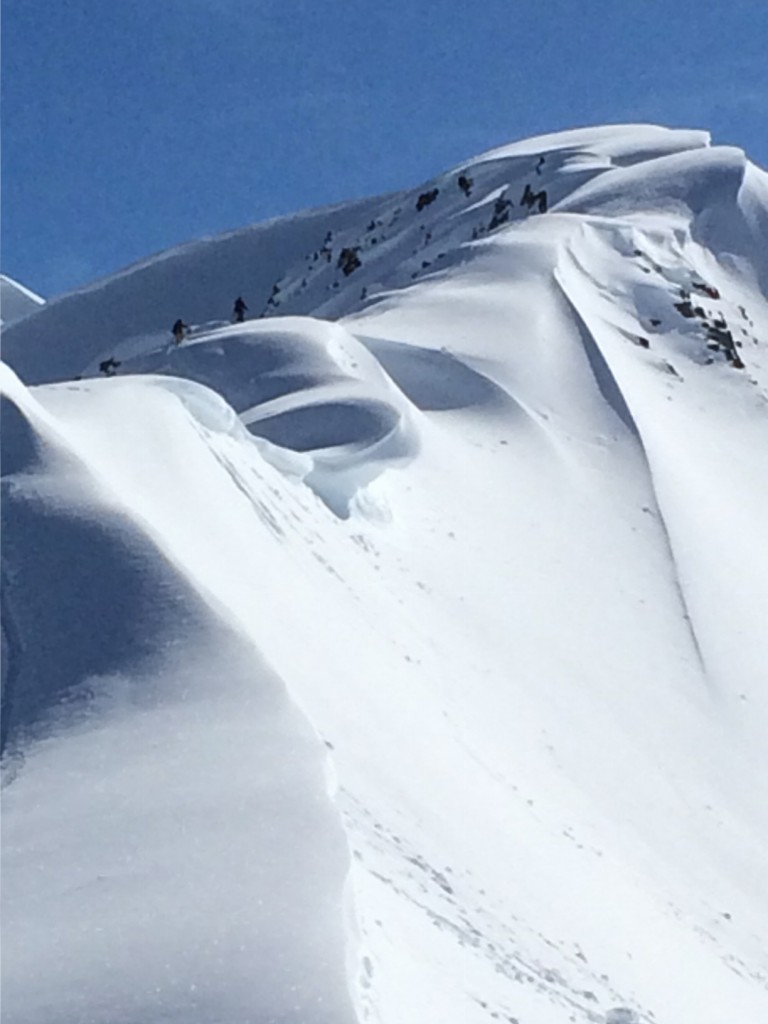 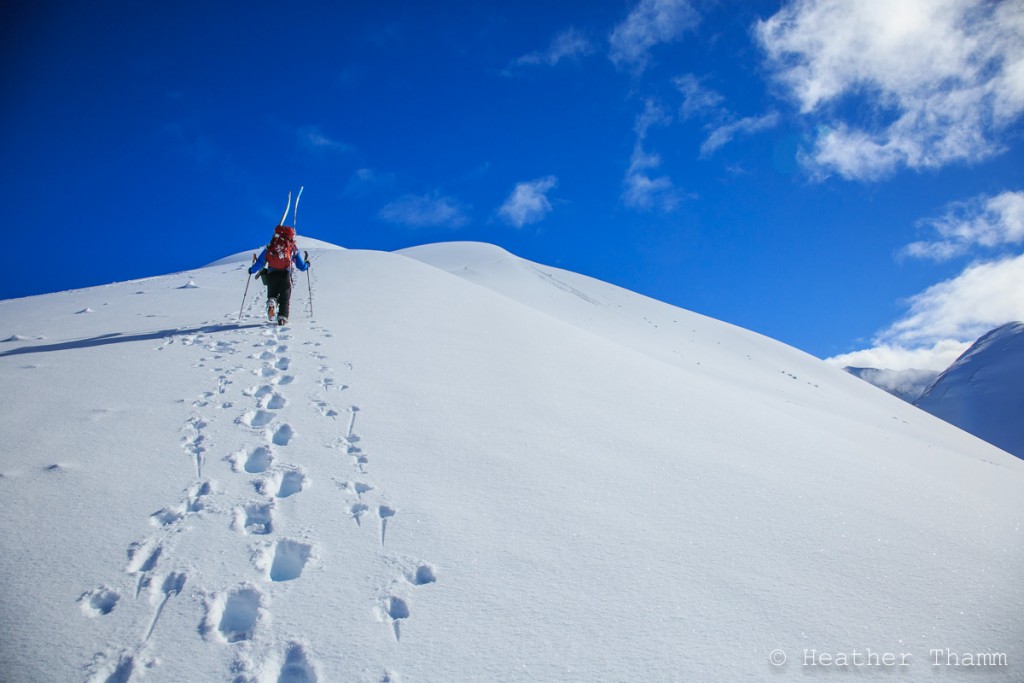 Yesterday skies were mostly sunny and winds were light from the East. In the mid elevation zone evening temperatures dipped below freezing and daytime temps reached the low 40F’s. No precipitation was recorded in the last 24hours. Overnight temperatures reached the mid 20’s F.

This morning skies will be mostly clear and become cloudy in the afternoon with rain showers beginning early evening. Temperatures will start to increase throughout the day and rain/snow will be around 1500′. Ridgetop Winds from the East are also expected to build throughout the day becoming Moderate (20-30 mph) by late afternoon.