The avalanche danger is CONSIDERABLE  at Treeline (below 2500′) in Turnagain Pass where glide avalanche activity has been especially active in the last two days. Due to a wet and saturated snowpack human triggered wet loose avalanches in steep terrain (greater than 35 degrees) are also possible in the mid elevation zone and will be more likely in the afternoon with the influence of solar heating.  Cautious route-finding and terrain evaluation are essential today to avoid being under the runout of glide cracks.

In the Alpine above 2500′ the avalanche danger is MODERATE, where triggering a cornice, wind slab or wet loose avalanche are possible and will increase with daytime temperatures.

*If you are headed to the Summit Lake area don’t forget to check  Summit Lake Summary  here and an HERE for observation from yesterday.

We have been talking about glide cracks and glide avalanches for months and the past couple weeks have been notably active. In the past couple days our concern for glide avalanches has become more elevated with a wet saturated snowpack and four nights of above freezing temperatures. New cracks are appearing and releasing, and old large cracks are also releasing without warning. The entire East face of Seattle Ridge is covered including the area of Repeat Offender, which has seen accelerated movement in the last two days. The area near the ‘uptrack’ is getting more cramped, with little wiggle room for safely playing in this area. The idea of parking under or someone getting a machine stuck under a glide crack is a total dice roll. Navigating through the mid-elevation band is getting more and more complex. The only way to mange this hazard is avoidance.

Yesterday glide activity on Seattle Ridge was impressive and several small lobes released near the uptrack. Click HERE for an observation of glide activity from Yesterday. 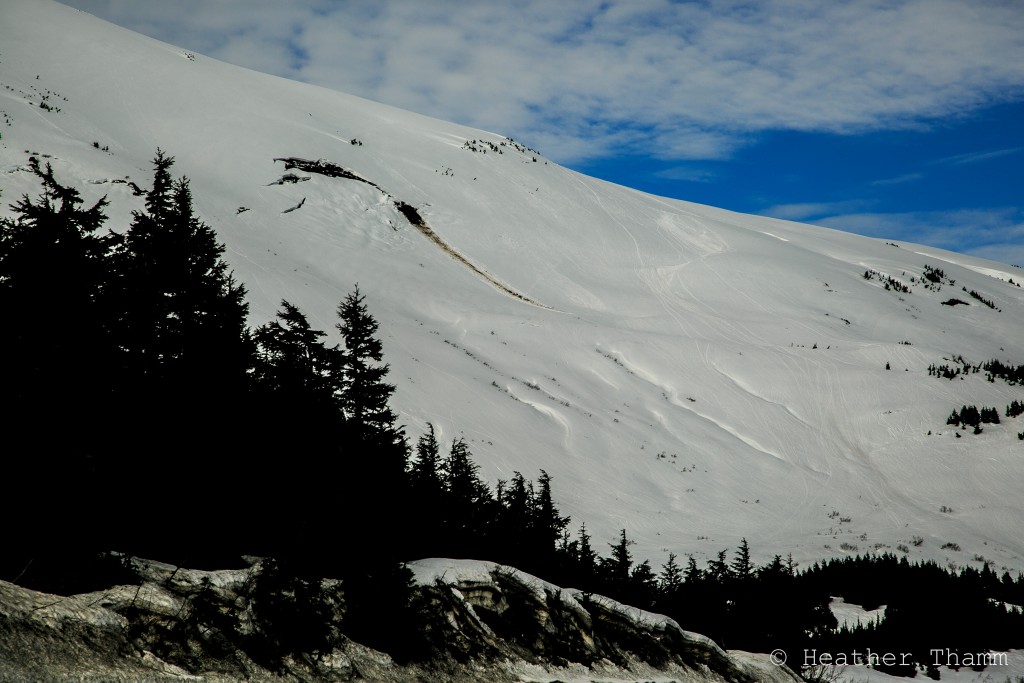 Many new glide avalanches were observed yesterday in Girdwood, Twentymile, and Turnagain Pass, including this one on the SW shoulder of Pete’s South. 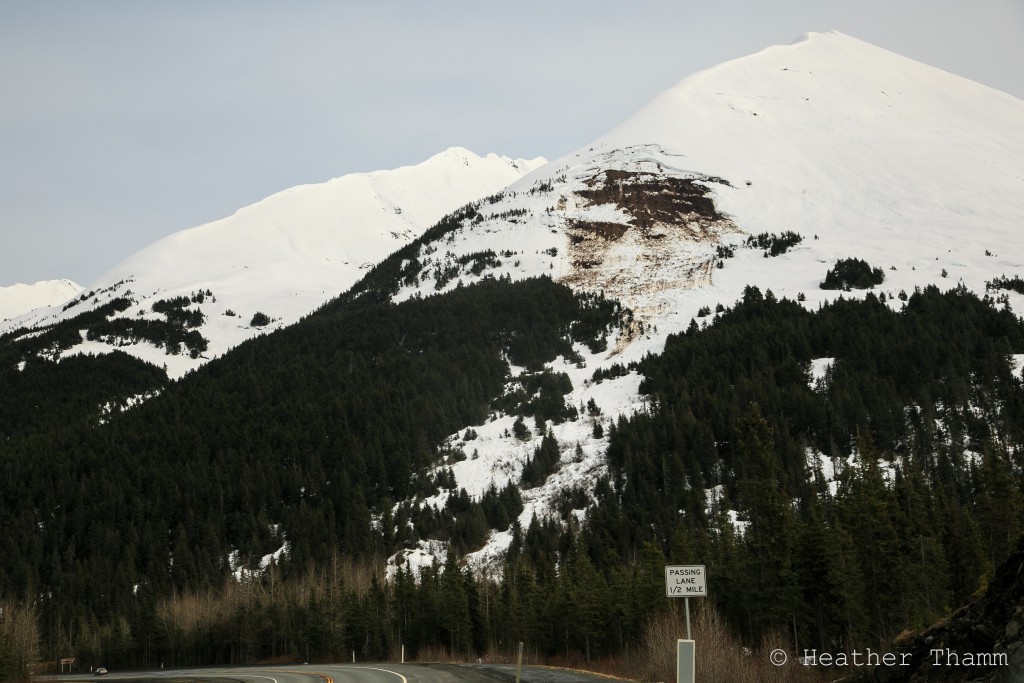 Uptrack is on far right side of picture; glide cracks cover and have almost connected the entire lookers left side of Repeat Offender on Seattle Ridge 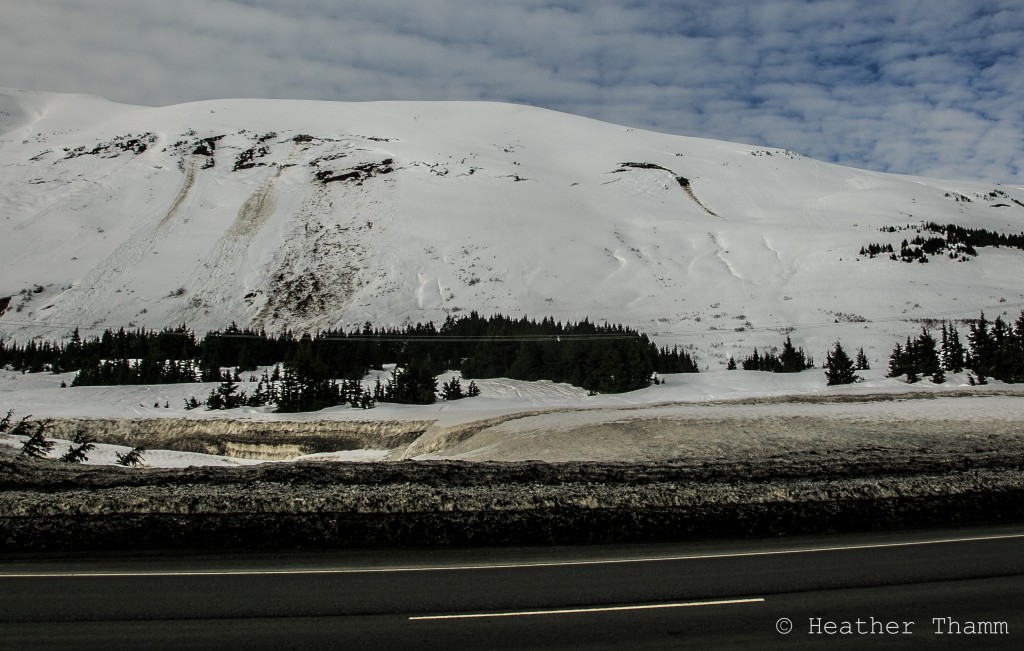 Yesterday temperatures reached the 50F’s at sea level, and for the fourth night in a row the mid elevation zone remained above freezing. This is not helping our wet and saturated snowpack stabilize very quickly. Wet loose natural activity was observed yesterday on all aspects, and on solar aspects the activity was larger and more notable.

Today triggering a wet loose avalanche will be possible below 2500’ on slopes steeper than 35 degrees. Wet avalanches once initiated can entrain more snow rapidly and are very hard to get out of. They can be particularly hazardous if they push you into a terrain trap and bury you deeply. If your skis or snowmachine are sinking deep into wet snow this is an obvious clue that the snow is unstable. Stick to low angle terrain and avoid runout zones where avalanches from above may catch you. Today’s weather forecast is for scattered rain showers, which could mean periods of sun. If the sun becomes more of a theme than cloud cover, expect natural wet avalanche in the alpine on solar aspects as well.

Wet loose activity observed yesterday morning on the West face of Magnum before the sun and day time temperatures started playing a roll. 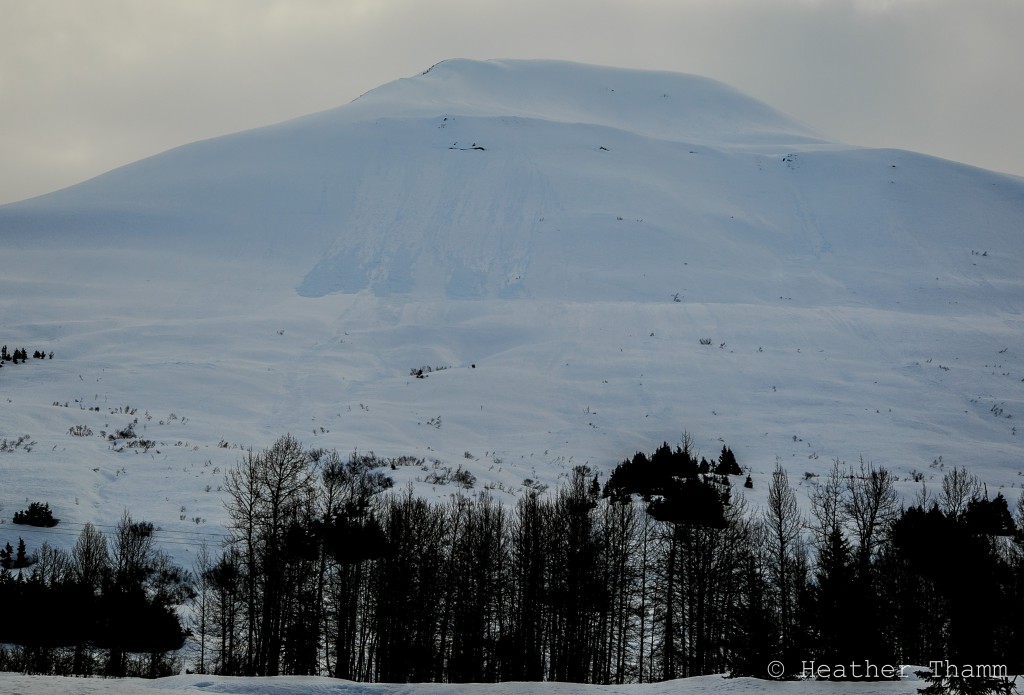 Finding a lingering wind slab 1-2’ thick is possible in steeper terrain today and will be more likely to trigger during the heat of the day on solar aspects. Watch for cracking in wind-loaded areas and avoid travel on or under cornices. Today’s warm temperatures will make cornices more likely to fail.

Yesterday daytime temperatures reached a high of 48F at the Center Ridge weather station and a high of 51F at Bird Flats. Ridgetop winds were calm and skies were mostly sunny throughout the day.

Overnight temperatures barely reached freezing (31F) at Seattle Ridge weather station as of 6am. At Center Ridge weather station there was an overnight low of 37F, which has an elevation of 1800′. Ridgetop winds were light from the Northeast and no precipitation was recorded in the last 24 hours.

Mid elevation temperatures will likely reach the mid to high 40F’s and temperatures in the alpine will also be above freezing for most the day. Scattered rain showers will move through the area, but only a trace of precipitation expected. Expect Northeast ridgetop winds to be in the 10-20mph range.