The avalanche danger is MODERATE today at and above treeline where cornices are looming large over wind-loaded terrain.   Triggering a wind slab 1-3′ in depth won’t be out of the question in steep, upper elevation terrain (greater than 35 degrees) either.   At treeline, the glide avalanche potential is real as the core advisory area is littered with glide cracks right now, some of which have avalanched to the ground over the last several days.

Below treeline the danger is LOW where an avalanche is unlikely after our snowpack has been bruised and beaten by rain, leaving it seasoned and well adjusted.

In areas such as  Summit Lake,  the snowpack is shallower and harbors more weak layers. Click  HERE  to read Saturday’s Summit Lake Summary.

Filing for the PFD this week? Remember, The Friends of the CNFAIC is part of  PICK.CLICK.GIVE. Your donations are greatly appreciated and an integral part to making the CNFAIC possible and sustainable

It’s not everyday that our avalanche problems are so obvious and visible to the naked eye but that seems to be the case today.  Found on all aspects, glide cracks seem to be relegated to the 1,000’ – 2,500’ elevation band.  Glide cracks are a strange beast that really are impossible to predict.  Weather and other triggers such as humans or even explosives that we associate with other dangerous avalanche problems don’t seem to effect glides in the same way.  There is no discernable pattern to predict a failure as they tend to fail naturally and on their own schedule.  Sometimes a glide crack won’t release at all, and benignly just fill back in with snow.  Knowing when or even whether a glide crack will avalanche is like asking is there “Life on Mars?”  Maybe, though the jury is still out so in the meantime, take your protein pill and put your helmet on!

Glide cracks are best to be given a wide berth.  Limit your exposure time spent underneath and if skiing in terrain with glide cracks, try and map them out before your decent so as not to end up directly on top of or inside one.  Remember, when these do fail, they tend to be destructive, failing to the ground bringing the entirety of the snowpack with them. 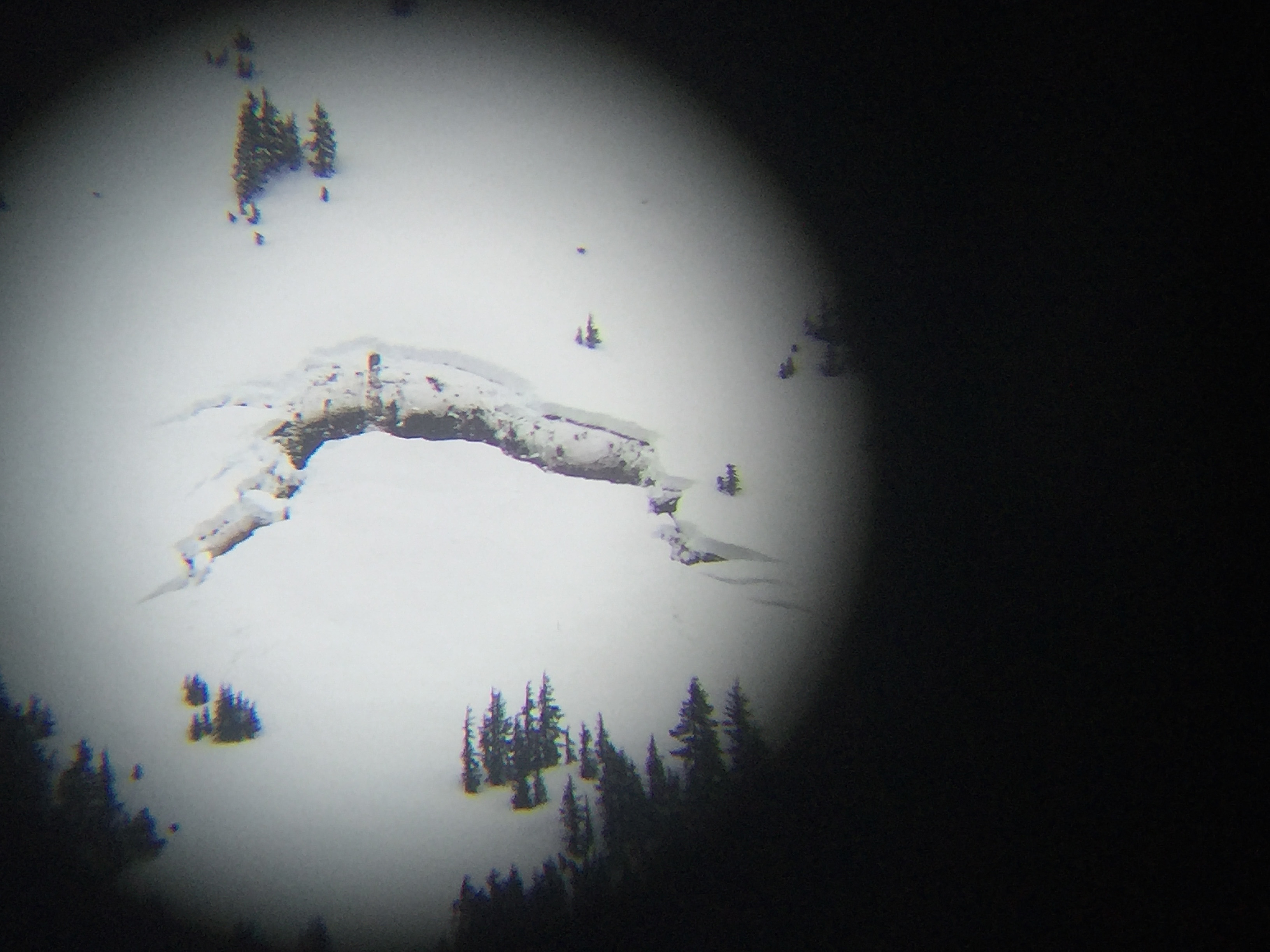 Large glide crack as seen ysterday from the highway, lookers left in Tincan trees. There are a lot of glide cracks in the Turnagain zone right now, but perhaps none as obvious as this one. 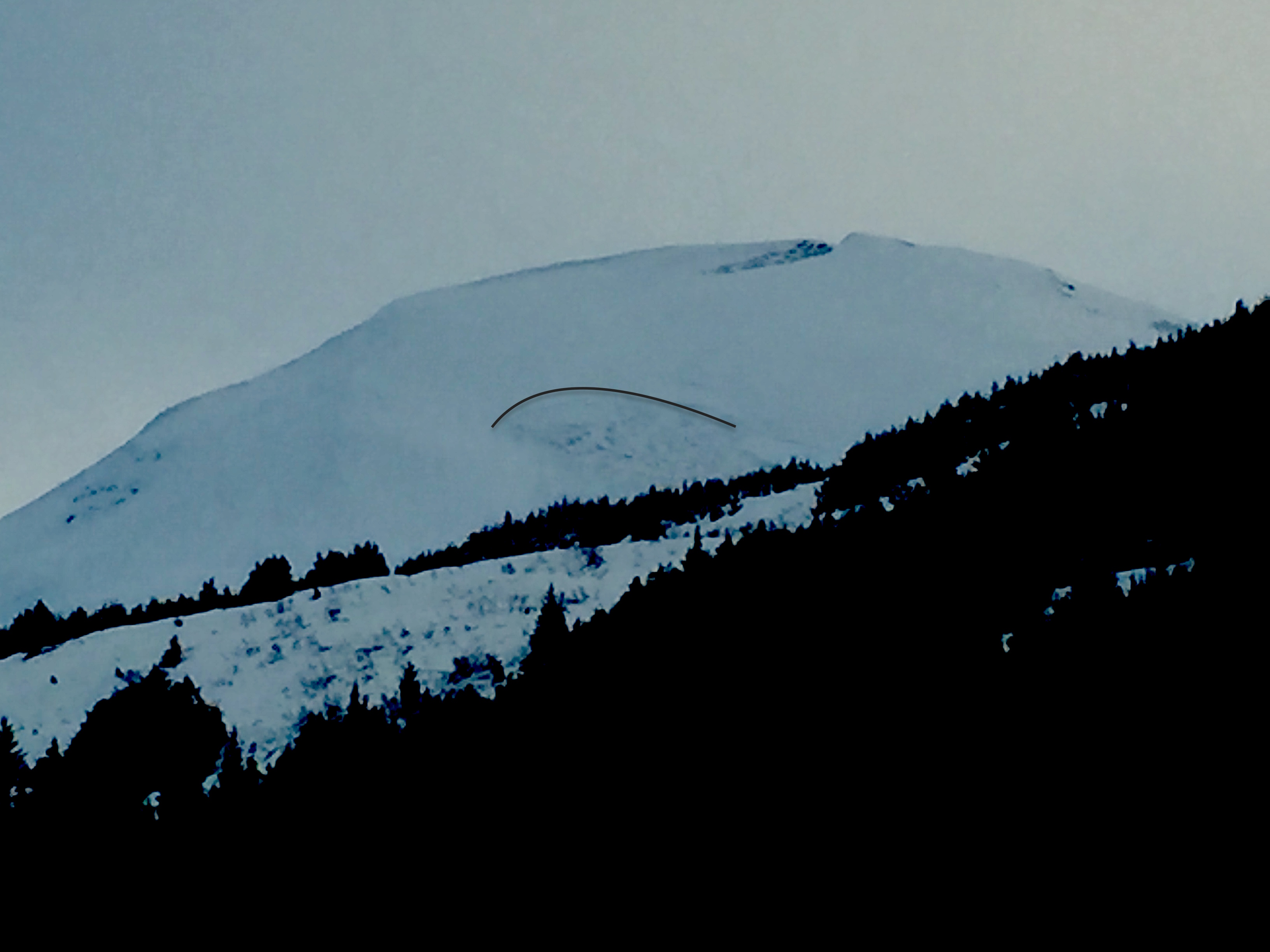 This glide released likely sometime over the weekend on the SW face of Lipps.  See more info and photos from Heather’s observation on 1/6.

Cornices have grown considerably during the past few weeks. Not only do they have the potential to fall naturally, but also to be triggered by the weight of a person or snowmachine. They can also trigger an avalanche below and, all in all, be VERY dangerous. Travel under or on them should be avoided. And remember, they have the tendency to break farther back from the ridge than expected.

We saw substantial winds over the weekend (30 – 70 mph from the east) and into yesterday that actively stripped windward slopes and built stiff windslabs in the alpine.  These may be in the 1-3’ range today and are most likely to be triggered from a rock outcrop or shallow spots near the edge of a slab.  Wind loaded slopes are visibly fat right now, pay attention to any red flags such as shooting cracks.  If you do decide to ski or snowmachine on a wind loaded slope greater than 35 degrees, do so one at a time and ensure you’ve got an escape route and a safe zone picked out.

Yesterday was a balmy day across the advisory area.   Temperatures hovered around 36 degrees at 1,000′ under mostly cloudy skies.   Winds continued from the East yesterday in the 10-20mph range before dropping off substantially and switching direction (to NW) overnight.   A few light flurries were seen at ridgetops but no accumulation to note.

Today our area will be influenced by a weak system moving east to west across southcentral AK.   Skies will be mostly obscured with clouds and a few scattered rain and snow showers persisting but not expected to add up to any accumulation.   Winds will be nearly non-existent (less than 10 mph) from the north with temperatures expected to be in the mid-30’s at 1,000′.

*A trip to Seattle ridge weather station yesterday found a broken anemometer due to heavy rime.  We’ll be working to get a replacement installed as soon as possible.