There is a CONSIDERABLE avalanche danger above treeline in the eastern Turnagain Arm region today in the wake of yet another powerful burst of easterly winds and subtropical moisture from yesterday.   Cautious route-finding and conservative decision-making will be essential as a variety of human-triggered storm snow avalanche issues may be found today.

Below treeline the danger is MODERATE due mainly to the threat from avalanches initiating above and running into this lower elevation band.

Today will mark the tail end of the most recent warm, wet storm that gave us another 1 € of water weight and storm force winds at ridgetop locations.   The conservative move today will be to keep your slope angles mellow and give any steep terrain (greater than 30 degrees) another day or two to adjust to this latest shock.   This includes avoiding terrain running under slide paths such as Johnson Pass Trail and Lynx Creek drainage.

Filing for the PFD this week? Remember, The Friends of the CNFAIC is part of  PICK.CLICK.GIVE. Your donations are greatly appreciated and an integral part to making the CNFAIC possible and sustainable.

Mark your calendars for two CNFAIC events this week!!

All events are free to the public!  You can see other upcoming events and courses on our Calendar tab above.

Though we lack information from the upper elevation start zones over the past week due to a very active and stormy weather pattern inhibiting travel, we can anticipate that today will be another day of storm-snow avalanche issues including the potential for winds slabs, storm slabs, and cornice fall.  These are all direct-action avalanche problems that occur during or immediately after a storm and can be exacerbated by a skier or snowmachiner in steep terrain today.

Wind slabs:  With sustained winds averaging in the mid-50’s mph yesterday (and gusts to 101mph on Sunburst) wind slabs are expected to be 2-5’ deep on leeward slopes, particularly above treeline; though it is worth recognizing that strong winds such as this has a tendency to load slopes far below ridge lines, creating a mid-slope avalanche problem.

Cornices: These most recent storms have provided all the right ingredients to build monumental cornices.  Sustained winds, relatively warm temps and moist snow all act to grow cornices quickly.  The quicker these backcountry bombs add mass, the more unstable they become.  It’ll be wise to steer clear of cornices, as these are likely to trigger a sizeable slab avalanche if falling onto a slope greater than 30 degrees today. 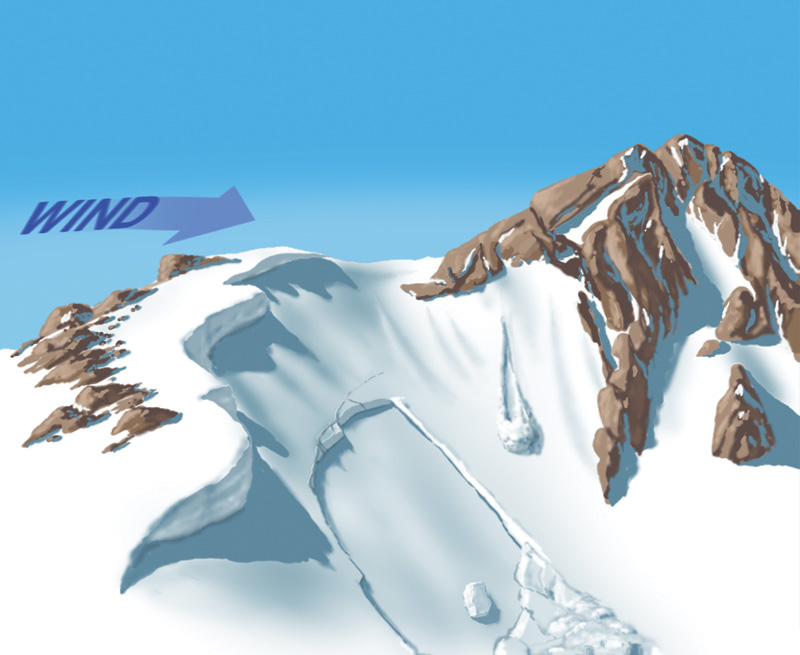 The stronger the prevailing winds, the lower down on the slope a wind slab will form.  Graphic from rockandice.com

Storm slab:  With another 1”of water at Center ridge and 8-12” of snow since Sunday night you can expect storm slabs to be 1-2’ deep and very heavy (saturated) in areas such as the Tincan trees.  Micro-terrain and tree wells can act as unavoidable and dangerous terrain traps if caught up in a heavy, wet storm slab.  The storm snow is settling out rather quickly in the mid-elevations but keep in mind we are still on the tail end of an active loading event today.

NOTE:  In areas such as Summit Lake, the snowpack is shallower and harbors more weak layers under the recent storm snow.  See Wendy’s observation and write-up from a snowboarder-triggered avalanche (Saturday) that failed on a buried surface hoar layer that ran on a mellow (30 degree) slope.

Sitting under 5-7′ of settled storm snow is a layer of old faceted snow on top of the Thanksgiving Rain Crust. As we pile more and more of a load on top of this facet/crust combo, we come closer to finding the breaking point where stress overcomes strength of the weak layer.  Some of the avalanche activity we’ve seen during this past week may have ‘stepped-down’ into this deeper layer resulting in very large avalanches.  The deep slab problem provides one more reason to keep terrain choices conservative until we see cooler temperatures and more stable weather allowing our snowpack time to adjust.  This includes limiting your exposure time spent underneath large paths such as those that effect areas such as Johnson pass and the Lynx creek drainage.

We can expect continued active weather throughout most of the day today as the tail end of yesterday’s storm moves through.   The rain/ snow line will again be hovering around the 1,200′ level with up to another 6 € of snow falling in the mid and upper elevations.   Temps will be in the mid- 30’s at 1,000′.   Predominant winds today will be out of the east in the 25-55mph range at ridgetops and tapering off throughout the day.

Overnight and tomorrow looks to be a brief break in the storm systems before we see yet another warm, wet and windy disturbance roll through the advisory area ahead of the weekend.