A CONSIDERABLE avalanche danger exists both at Treeline and in the Alpine where windslabs 1-4′ will be likely triggered on steep wind loaded features. Today natural activity is not expected in Turnagain Pass, however due to continued stormy conditions and recent rapid loading triggering a deeper more dangerous avalanche will have very high consequences. Therefore today’s travel advice in the Alpine will adhere to the HIGH danger rating where travel is not recommended.

A MODERATE avalanche danger exists below 1500′ where the snowpack is wet and saturated and a larger avalanche from above could easily run into this elevation band.

*In the Girdwood Valley where more precipitation was recorded overnight natural activity in this area is more likely. Should winds increase beyond the forecasted 20-30mph range today, avalanche danger will be HIGH in the Alpine.

Recent high winds and new snow have created a variety of instabilities both within and outside of our forecast zone. Yesterday a very lucky skier triggered a windslab on Peak 3 in the Anchorage Front Range and fortunately was not caught. Click HERE for pictures and description of the incident. Until stormy conditions subside, avalanche danger will remain elevated in the Southcentral region.

FCNFAIC is now accepting applications for TWO NEW scholarships! Both scholarships are for avalanche education up to $500. One will be awarded to a snowmachiner and the other to a skier or non-motorized user.

Please include in your application: name, mailing address, your financial need and how you plan to spread avalanche awareness to your community post-award.   Applications due by 10PM on January 6th.   Please send  your applications to  chugachavyfriends@gmail.com

The Friends-CNFAIC board  looks forward to hearing from you!

Stormy weather has been the theme of our holiday break with over 4.5’ of new snow recorded at Center Ridge Weather Station. On December 29th and December 30th two separate storms brought a mix of rain and snow and high sustained ridgetop winds averaging over 70mph with gusts well over 100mph for multiple hours. Rain/snow line pushed as high as 1800’ saturating the snowpack at the Treeline elevation band. As observed yesterday this rapid loading event has created a variety of avalanche problems that will be challenging to manage today.

1) Wind slab: Triggering a wind slab 1-4’ is likely on steep wind loaded features where multiple layers of wind affected snow exist. Yesterday these wind loaded areas were easy to spot due to their pillow-like shape, but today another 4-5” of snow is expected and moderate Easterly winds 20-30 mph will be transporting more new snow on top, thus adding additional stress to an already stressed out snowpack.

2) Persistent slab: If slides break into older weak layers, we could see very large avalanches, up to 6′ thick (more on this below).

3) Cornices: With such strong winds and warm snow at ridgetops, we can expect cornices to be tender. These ‘backcountry bombs’ are likely to trigger a wind slab or step down to a deeper instability. Avoid ridgelines with large cornices and don’t put yourself below one.

4) Wet loose avalanches: Rain on snow has saturated to upper layers of the snowpack below 1500’. This is more of a concern in areas with terrain traps and in steep channeled terrain where an avalanche from above will be impossible to escape.

On the Southern side of Turnagain Pass and extending into the periphery of zone of Summit Lake, this concern is elevated, where a generally thinner snow pack exists. Triggering an older weak layer will be more likely in these areas and possible in Turnagain Pass and Girdwood.

Some of the avalanches triggered by avalanche hazard reduction by the Alaska Railroad and ADOT ran on older layers, and several large natural D3 avalanche were reported over the last two days including one on Butch Peak in Summit Lake and another at Lower Russian Lake, outside of the forecast zone.

A lot of uncertainty exists as to how easily a person could trigger one of these deeper instabilities. Recent high winds have moved a lot of snow around creating more potential for thinner areas in the snowpack and more stress on the thicker areas. These thin spots will be likely trigger points where a person could unknowingly collapse a weak layer below.  Also a larger trigger like a snowmachine or a cornice failure could be just enough force to tip the balance in deeper areas of the snowpack. Obvious signs of instability like ‘Woomphing’ are unlikely to be present or serve as a warning.

Right now the snow pack is stressed out! It is not the time to get into steep terrain even if a brief window of visibility opens up. The only way to manage this avalanche problem is to avoid steep terrain including being in the runout zone of a steeper slope above. Should you choose to venture into the higher elevation band today cautious routefinding and conservative decision-making are essential.

This avalanche came down on December 28th and picture was sent to us from the public yesterday. Heads up if you are travelling to Barber Cabin. This is the second time this path has slid in the last month. 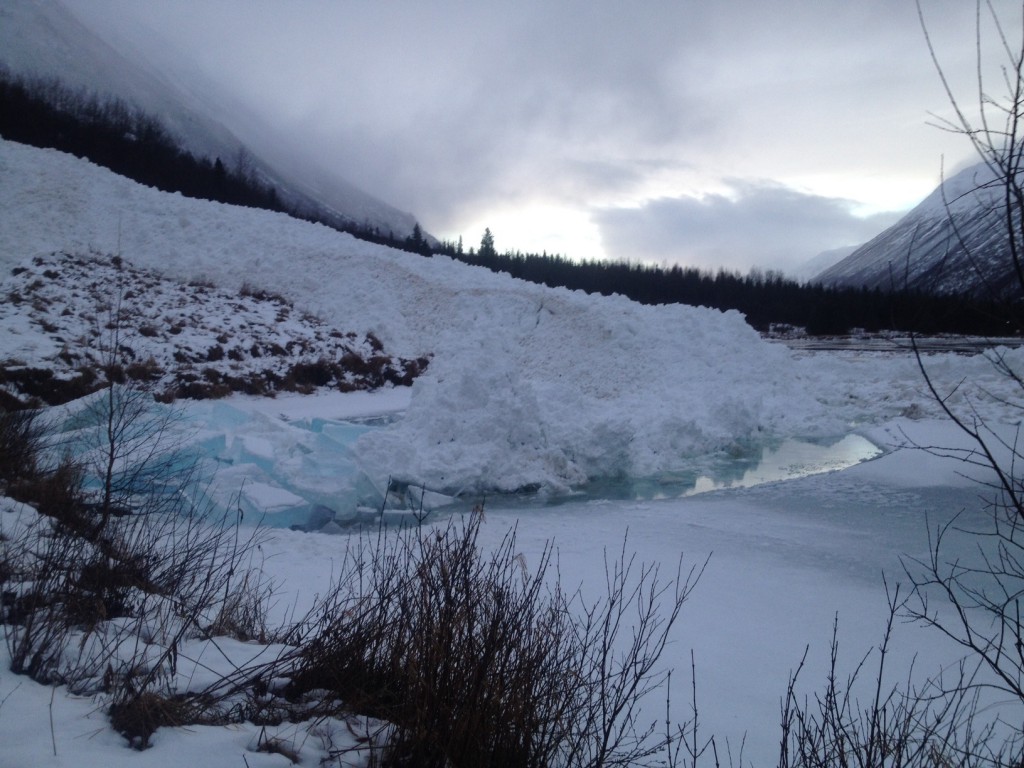 The last five days has brought 5.4 € ­ ­ ­ ­of snow water equivalent to Center Ridge Weather Station. This has been in the form of mostly snow, but warm temperatures above freezing level reached just above this elevation band on several occasion in the last 3 days. Strong storm force winds averaged in the 70’s mph with multiple gusts reaching 117mph early morning on December 30th. Rain/snow line reached just over 1800′.

Yesterday a brief break in the weather was observed in Turnagain Pass; skies cleared temporarily allowing for a period of cooling on the snow surface. Below 1000′ temperatures stayed above freezing and scattered rain showers persisted all day in Girdwood and Portage Valley. Ridgetop winds decreased into the 20 mph range between 11am €“ midnight.

Today scattered showers will continue with up to another .5 € of water expected today. This will be in the form of rain below 1500′ and up to 5 inches of snow in the upper elevations. Winds are expected to be moderate from the East, 20-30mph at ridgetops. Expect more scattered showers and above freezing temperatures into the weekend.