The overall avalanche stability in Turnagain Pass continues to trend towards LOW danger, however with the variability in snowpack depth and structure, a MODERATE  avalanche danger still exists in the Alpine. Human triggered avalanches may be possible in steep terrain above 2500′. Practice safe travel techniques, ease into terrain one at a time and look for signs of instability before committing to slopes greater than 35 degrees.

Below 2500′ the danger is  LOW  where the snowpack has frozen after being saturated last week.

Fireside Chats are back!  We want to thank  Blue and Gold Boardshop  for hosting our first Fireside chat of the season and the 65+ riders and skiers that showed up last night to learn about avalanche terrain! Our next Fireside chat will be Thursday, December 10th at Alaska Avalanche School. The topic will be avalanche rescue. We hope to see you there! All Fireside chats are FREE! For more information check out our calendar page  HERE.

For good reminder that small slopes can have big consequences click HERE for yesterday’s article in the Fairbanks Daily News-Miner about a recent close call in the Summit Lake area.

The East Hatcher Pass Management Area reopened the road to Hatcher Pass last night. Click HERE for the Alaska Dispatch News article. Visit  hatcherpassavalanchecenter.org  for current information on Hatcher Pass conditions and click  HERE  to read the most current article on the search efforts for the missing skier.

The aftermath of the avalanche cycle November 27th/28th is evident in the terrain on Turnagain pass. There were a number of large slides in the Alpine but much of the steep terrain did not avalanche during this last cycle. It has been almost a week since our significant loading event and there have been no recent signs of instability reported. Recent snow has provided great riding conditions and folks have been enjoying the mostly stable return to winter in the advisory area.

We continue to be suspect of steep, primarily northerly terrain that still may harbor facets that formed during the early November cold snap. Digging and probing yesterday highlighted that variability of snowpack depth and structure. Areas that are shallow and that have stiff snow over weak facets (sugar snow) are the main concern. This poor structure still has the potential to present as a Persistent Slab avalanche. This could be especially hazardous in steep, high consequence terrain where even a small slide could take you for a dangerous ride. Probing and trying to investigate the depth and layering in the terrain you are choosing to ride are recommended before committing to big lines.

We have limited information on the snowpack characteristics in the Girdwood valley and the Summit area. Both zones also have variability and warrant caution when venturing into avalanche terrain.

Remember to always practice safe travel rituals on steep slopes, namely, only expose one person at a time, watch your partners carefully, and regroup in safe zones.

Photo: D3 avalanche in Superbowl/Corner Pocket reported on November 29th. We believe this slide occurred during the November 27th/28th cycle. The remnants of the crown are highlighted in red. 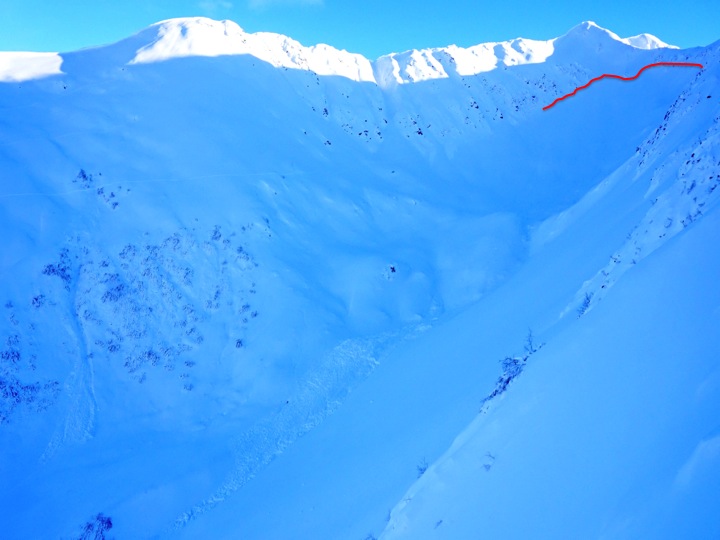 We had mostly clear skies yesterday, light winds and temperatures the mid-20Fs as a ridge moved over the region. Today will be partly to mostly cloudy with snow showers developing as the next low effects the advisory area. Snow is expected to be light with the possibility of a brief heavier shot of snow overnight. Snow amounts forecasted are for 2-4″ today and 1-3″ tonight. Winds will be light and Easterly and temperatures will be in the 20Fs to mid-30Fs.