If you are headed North to Hatcher Pass PLEASE see hatcherpassavalanchecenter.org. Hatcher Pass received upwards of 18″ of snow between Sunday night and Monday night. The avalanche danger is high in this region.

*Note: the Independence Mine snotel station was struck by lightning this summer and the data is suspect. The snow stake accessed from the F-CNFAIC Marmot weather station is working well.

Our second winter storm for November moved through our region last night, Sunday Nov 8. Snowfall amounts were modest, but it’s snow! Ridgetop winds associated with the storm were strong, in the order of 25-30mph with gusts up to 50mph from the East. Both snowfall and wind have decreased dramatically this morning. Snowfall totals at mid elevations:

A reminder that we will be issuing intermittent updates for another couple weeks. Advisories with danger ratings will begin around Thanksgiving week.

If you are getting out in the mountains things to watch for are:

All of the above indicate an unstable snowpack and the potential for a person to trigger an avalanche. Areas where avalanche potential has increased will be where more than 5-6″ of snow has fallen and/or where the wind has loaded slopes. Also, don’t be fooled by the thin snow cover as it does not take much snow to cause a dangerous slide.

Snow stability over the weekend was good at the usual haunts around Turnagain Pass (Tincan, Sunburst, Seattle Ridge). We had no reports of avalanche activity or unstable snow. However, other areas around Southcentral were not so fortunate:

Anchorage Front Range, Saturday:   Close call with a climber triggered avalanche on O’Malley Peak. This was a small(ish) avalanche with very high consequences as it ran over extremely steep terrain below. Photo of this slide below and see link for the report. 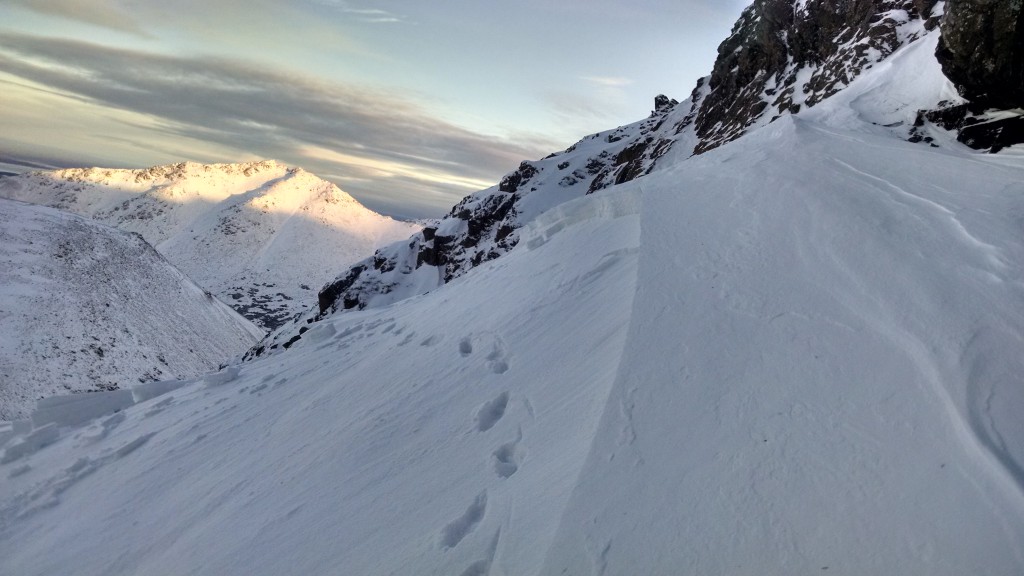 Don’t forget to buy your tickets for the F-CNFAIC Fall FUNdraiser at the Bear Tooth – Thursday Nov 12th !! This event sells out fast – details HERE.

This year we have Greg Hill presenting: Mountain Lessons. Come journey with Greg Hill as he goes through his past adventures. The lessons learned in his successful 2 million feet in a year, the rules he honed to stay safe throughout that adventure. A near miss in the Himalayas, during the 2012 Manaslu disaster, and most recently a misadventure in Pakistan.