Today the avalanche danger is MODERATE where triggering a large avalanche is possible in the Alpine and at Treeline. Below 2500′ a very €œupside down € snowpack persists where a slab 1-5′ thick could release. On Northern shaded aspects above 2500′ a slab 3-5′ thick is sitting on layer of weak faceted snow and if triggered could have very high consequences.  It will be important to avoid all steep open slopes at Treeline and on Northern aspects in the Alpine.  Newly forming isolated  windslabs will also be something to watch for if snow showers occur as forecasted today.

* The most desirable snow will be found on shaded aspects and this could make decision-making challenging. Be sure to practice safe travel rituals; identify islands of safety, only expose one person at time, and always have an escape zone.

Beginning tomorrow, April 13th, we will be issuing advisories 5 days a week.   Advisories will be posted at 7 am on all days of the week except Mondays and Wednesdays.   The final advisory of the season will be posted on Thursday April 30th.

Below 2500’ a layer of wet poorly bonded snow is sitting beneath a slab 1-5’ thick, depending on the location. On the Northern side of the Turnagain pass this slab is closer to 5’ thick. Yesterday on Eddies’ South Face several large (D3) avalanches released naturally on this wet layer. Simultaneously several smaller avalanches released sympathetically on adjacent slopes. It was reported that this occurred in one single event during the warmest part of the day, just after 3pm. Several parties all in different locations described a very loud “Canon” sounding collapse and felt the snowpack drop ½ an inch.

On the far Southern end of Turnagain Pass where this slab is only 1-2’ thick below 2500’, recent activity and collapsing were not observed yesterday. What this means is that there is more stress on this weak layer where the slab is thicker and thus more likelihood of it reaching its critical tipping point. This problem exists on all aspects below 2500’ and could become active even in places where the slab is thinner. At this elevation band it will be important to avoid being on or near large slopes steeper than 35°. Some examples of these slopes are the East Face of Seattle Ridge and the Library near Center Ridge.

*Even thought temperatures are dropping below freezing at night the wet snow below is unable to re-freeze due to the insulating properties of the slab. This problem is likely to persist for a while and will be most active during the warmest parts of the day.

Close up photo of one of the many avalanches that occured yesterday on Eddies. This one was on a SW apsect. Photo by Laine Parish. 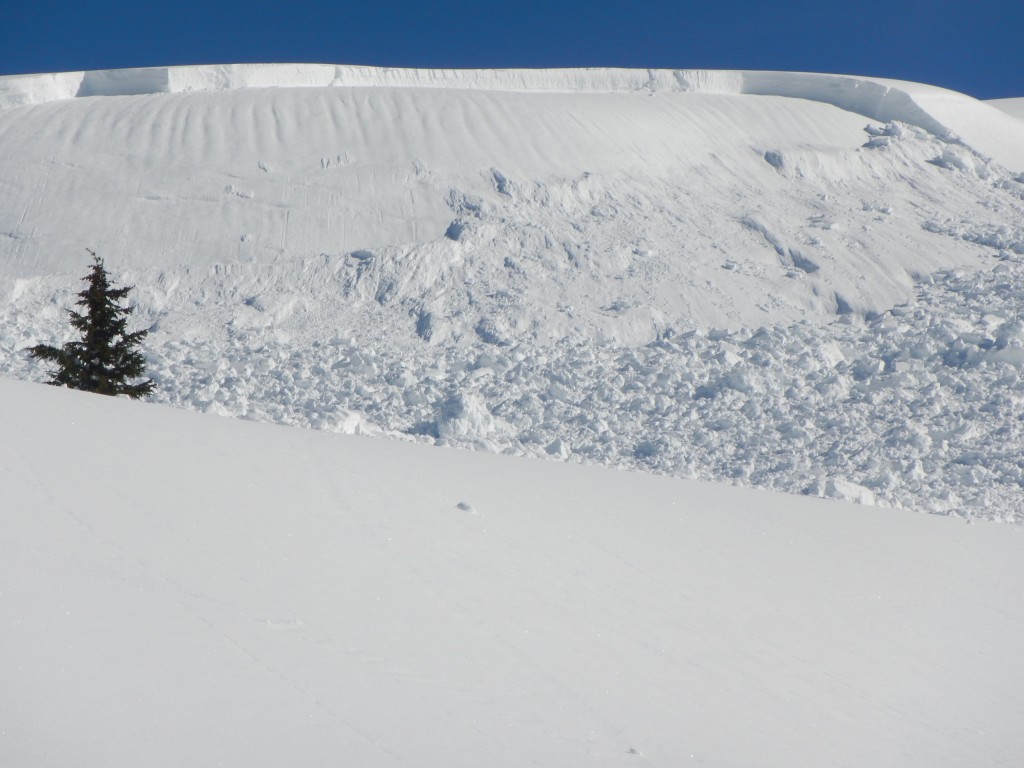 View of Eddies West Face. Several larger (D3) avalanches occured at a similar elevation band on the South Face, but could not be seen in entirety from the roadside. 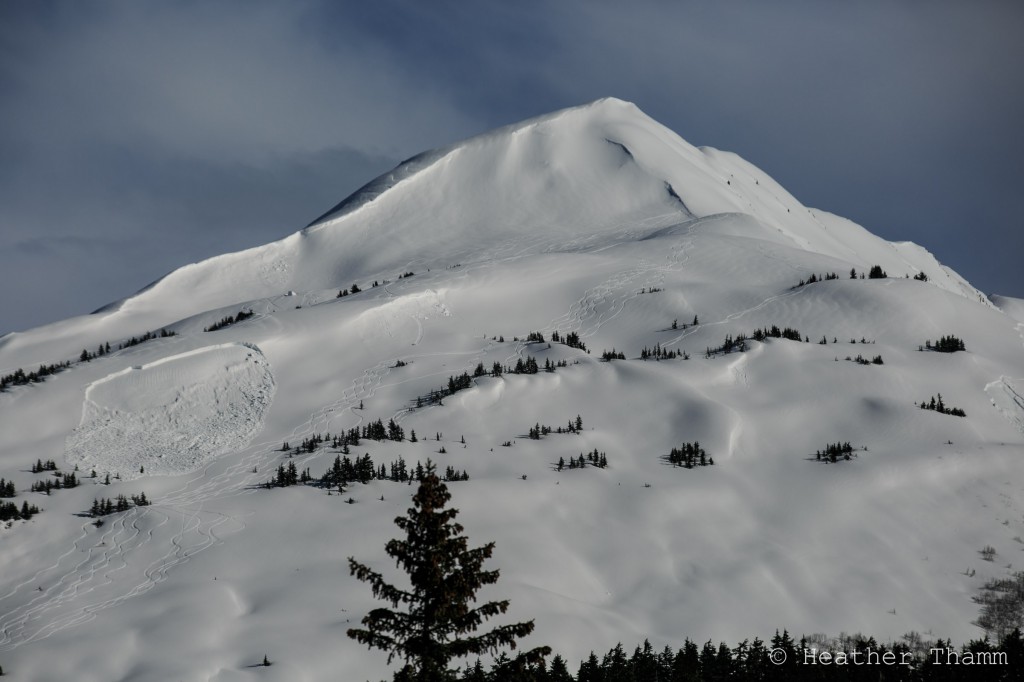 Oblique view of the South aspect of Eddies. Several large (D3) avalanches are out of view from roadside perspective. 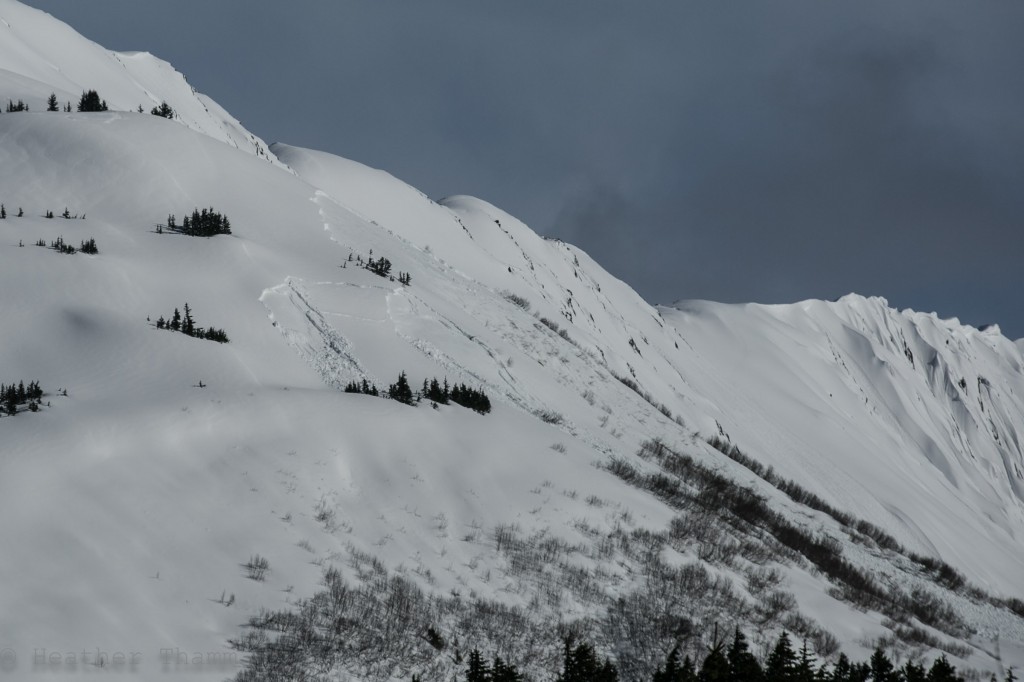 Weak layers of faceted snow buried as deep as 5’ sit on some slopes on North facing terrain in the Alpine.  This set up will not be found everywhere.  Because of this variability, it is especially important to treat this terrain with suspicion.  Assessment of this issue is very difficult.  The best strategy for “managing” this problem is to avoid this terrain for the time being and give those underlying weak layers ample time to adjust to the large loads (3’+ snow/3”+ H20 over the last week) that have been placed on them.  This is a low likelihood/high consequence scenario that requires patience and time.

Yesterday skies were mostly clear with light winds out of the Northeast along ridgetops. Temperatures reached the low 40s F near 1000′. No precipitation occurred during the day.

Overnight light flurries produced an inch of new snow in Turnagain Pass.  No new snow was recorded in Girdwood. Temperatures dipped into the high 20s F at lower elevations and the low 20s F near ridgetops. Winds were 10-20mph from the NE along ridgetops.

Today will be mostly cloudy with scattered snow and rain showers throughout the day. Up to 3 inches of accumulation is expected. Ridgetop winds will be light to moderate (10-20 mph) from the Northeast.