Above 2500′ the avalanche danger is  MODERATE  today where a poor snowpack structure will make it possible to trigger an avalanche 1-2′ deep.   Likely trigger points will be mid-slope on steep rollovers and unsupported convexities.   Steep, southerly aspects will also warrant special attention today as any localized, rapid solar warming could be enough to wake up a buried layer of facets.

Below 2500′ the avalanche danger is LOW, where a supportable melt/ freeze crust has formed, locking up the shallow snowpack that does exist.

Tonight’s the night!   Come join us for the 1st  annual SNOWBALL at the Taproot in Spenard.   Great company, food, drinks AND entertainment provided!   Door prizes, raffles and more will be given away including a new pair of skis from  Powder Hound Ski Shop, an Arc’teryx Backpack, Alaska Railroad tickets and round trip tickets anywhere Alaska Airlines flies!!    Purchase tickets online here  or show up after 9PM to catch the second band and pay only $10.

Information from the field yesterday validates the fact that a poor structure (slab/ weak layer/ bed surface) is persisting and a fracture, if initiated has the potential to propagate across a slope.  The most reactive snow, and where you are more likely to trigger an avalanche appears to be in the mid-elevation band between 2400’ and 2900’.  This is where my partners and I experienced large and frequent collapsing yesterday; prompting us to change our travel plans and seek out mellower terrain.  Obvious red flags such as whumphing, recent avalanches and shooting cracks should not be taken lightly as this persistent weak layer is keeping us on the higher end of moderate danger right now.

Above 3,000’ our layer of concern is comprised of smaller, less advanced buried facets still overlain by a slab.  This is more difficult to see in a snowpit and whumphing and shooting cracks may not be so obvious until a slope avalanches, making safe travel protocol of the utmost importance.  Identify features of concern such as unsupported convexities and mid-slope roll overs.  Avoid these areas today or at the least expose only one person at a time and have a well thought out escape route and safe zone if a slope does slide.

A further concern on south facing slopes today has to do with direct sun and inverted (warmer at ridgetops) temperatures.  Rapid warming today could be enough to initiate an avalanche on steep, southerly terrain particularly near rock out crops or shallow spots in the slab as seen below. 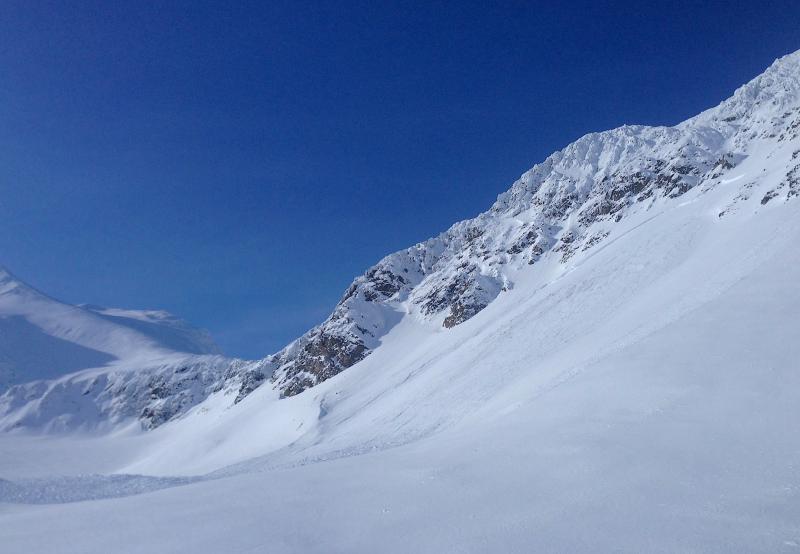 Natural avalanche observed yesterday on the periphery of the advisory area near Grandview.  SSW aspect at about 4,000′.

Calm winds and clear skies prevailed in the backcountry yesterday with temperatures increasing to the low 30’s at ridgetops by days end as high cirrus clouds moved in.  Winds are back online (light out of the west) at the Sunburst weather station after a successful anemometer replacement mission yesterday!

Temperatures are slightly inverted this morning with ridgetops readings in the low to mid-30’s while Center ridge (1880′) is reading 24 degrees at 6am.  Expect this air to mix and the inversion to lessen as the sun begins heating up the earth’s surface.  Winds are expected to be in the 8-20mph range shifting to the southeast as clouds stream into our region this afternoon and evening.

We may see a trace of snow overnight and up to a couple inches by tomorrow night but the upslope nature of this weak surface low looks to favor Anchorage more than the eastern Turnagain arm.

*Sunburst wind info is an average from 2pm to 6am.