Weather in the form of high winds will be arriving today as another low-pressure system moves into the Southcentral region.   Precipitation is expected to intensify into Saturday and will likely increase the avalanche danger for tomorrow.

Today we will see the first of this weather pattern shift as East winds increase, possibly as high as 30-40 mph along ridgetops. With only a few inches of snow available for transport wind loading could add additional stress to an already reactive weak layer.

Above 2000’ a weak layer of faceted snow is present beneath a 2’ slab in Turnagain Pass that was laid down four days ago. On Tuesday several remotely triggered avalanches occurred on the South face of Tincan as seen in the photo below. Collapsing has been the most commonly observed (heard) sign as this weak layer adjusts to its load. Over the last few days many test pits have been performed and continue to show propagation potential with moderate results.

In areas outside of Turnagain Pass a similar (SLAB + WEAK LAYER) problem exists. In Summit Lake the average slab depth is closer to 1’ in the alpine. Click HERE to see a video from yesterday at Manitoba. In the upper elevations of Girdwood this slab is estimated to be closer to 3’ thick.

Travel advice today is very simple. Avoid all slope angles greater than 35° including small steep features with terrain traps below. With high winds and poor visibility expected today this should be easy advice to follow.

This is a view of Tincan’s South face as seen from along the Seward Hwy. These three avalanches were remotely trigged on Feb.17, the day after a storm left 2′ of snow in the upper elevations of Turnagain Pass. If you look closely you will notice recent ski tracks on Common bowl avoid the steepest convexed rollover. 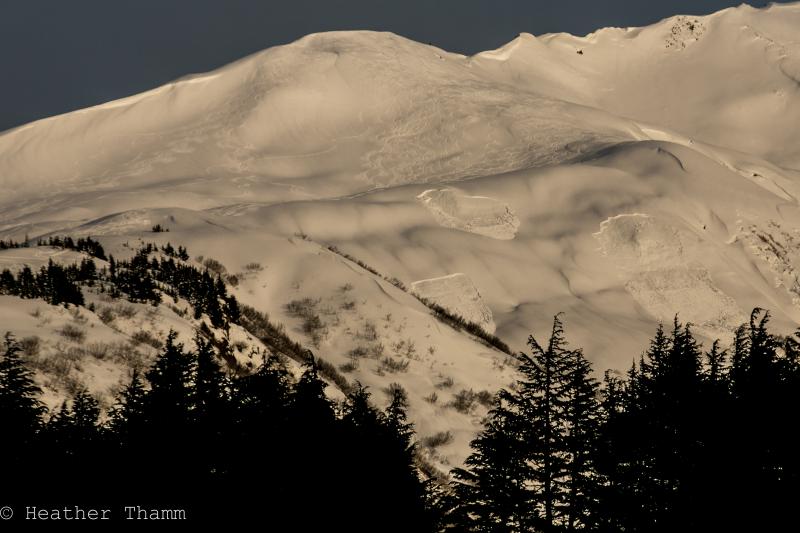 If winds increase as forecasted today small wind slabs 4-6” could be found at mid elevation near treeline. This is a secondary problem to the persistent weak layer + slab combo described above and travel advice remains the same.

Overnight temperatures have remained elevated in the low 30’s F at lower elevations and high 20’s F along ridgetops. Winds have steadily increasing 15-35mph out of the Southeast on Seattle Ridge and no new precipitation has been recorded in Turnagain Pass.

Today ridgetop winds are expected to be out of the East (30-40 mph) as another warm low-pressure system moves into the Southcentral region. Temperatures will be in the mid to high 30’s F at sea level, with light precipitation starting this afternoon into the evening. Rain/snow line could be as high as 1500′.

Tonight strong winds (40-50 mph) will continue out of the East in Turnagain Pass. Precipitation will increase with up to an inch of water (rain) expected for Saturday at sea level. Temperatures could reach the low 40’s F and rain/snow line may be as high as 2000′.

*Seattle Ridge weather station wind data was only available after 3PM on Feb.19.